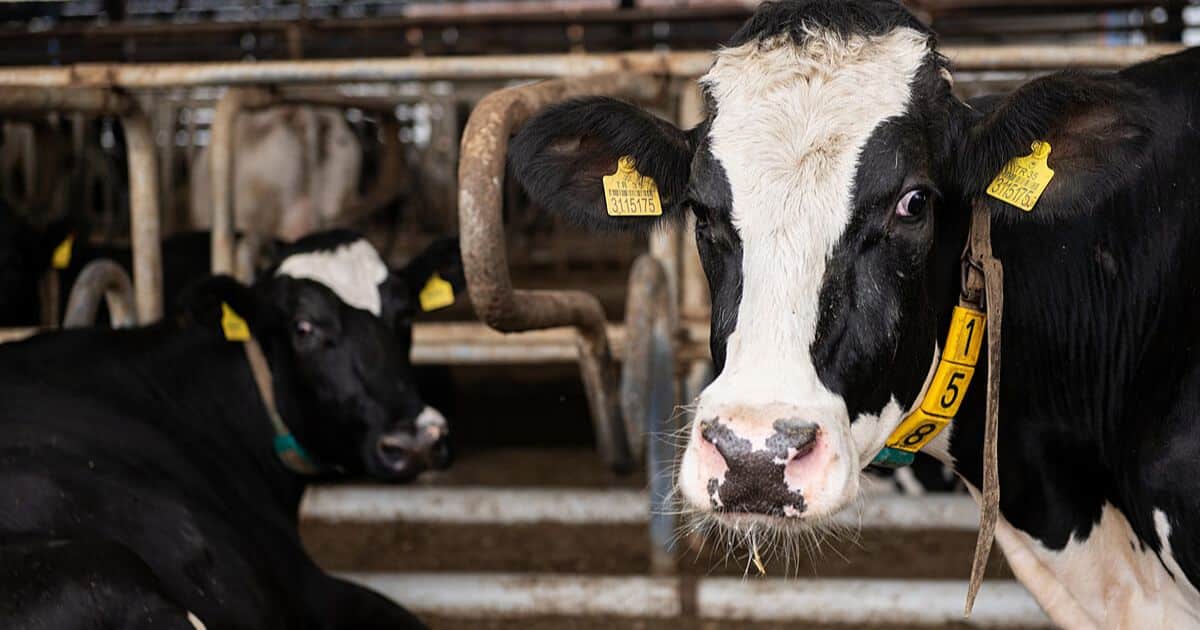 Got milk? For many of us this question — with the accompanying black and white ads and celebrities sporting milk mustaches — was a familiar fixture of our childhoods. Two simple words aimed to move a generation and convince us and well-meaning adults to make a glass of milk a standard part of our meals. However, this iconic marketing campaign left out an important fact about the dairy industry — the massive environmental impact wrought by dairy farming — an impact measured in waterways, the air and even in the quality of the soil.

With its industrial-scale operations housing thousands of cattle, the dairy industry is responsible for different types of environmental pollution, including significant emissions of greenhouse gases that contribute to climate change. In addition to damaging the environment, the industry is responsible for vast animal suffering. The handful of corporations that have come to dominate the industry are also largely responsible for pushing smaller, family-owned farms out of business. Smaller operations struggle to produce milk at low prices set largely by large farm operations that are often bolstered by subsidies and other financial incentives.

What Are the Environmental Impacts of Dairy?

Livestock farming is responsible for more greenhouse gas emissions than any other food sector source. According to the Food and Agriculture Organization of the United Nations, milk production globally increased by 30 percent between 2005 and 2015 and was accompanied by a global dairy cow herd increase of 11 percent. Dairy is responsible for 2.9 percent of total human-induced greenhouse gas emissions. In addition, dairy production in intensive farming systems pollutes air and water and contributes heavily to soil degradation and deforestation. Of the 195 countries committed to reaching Paris Climate Agreement goals, 92 of them identified their own livestock industries as an area for climate action to help reach country-wide emissions reduction goals.

The dairy industry is an important contributor of greenhouse gases in the U.S. Dairy farms are responsible for 1.5 percent of the country’s estimated total greenhouse gas emissions. Dairy farms are also responsible for other types of air pollution, including an estimated 19 to 24 percent of the country’s total ammonia emissions.

Pollution from livestock production operations, including dairy farms, can have deadly results. In fact, deaths attributable to air pollution from livestock now outnumber deaths caused by coal power plants. Every year roughly 12,700 people in the United States die as a result of their exposure to emissions from animal farming operations. Almost 2,000 deaths are attributable to emissions that originate from dairy farming.

Intensive dairy farming facilities pollute the local waterways of surrounding communities, even making them unusable if not outright dangerous. Manure from thousands of dairy cattle housed in factory farms is stored in large vats until it can be applied to nearby crop fields. But because there is simply too much manure for it to be applied to the land usefully and safely, nitrogen and phosphorus often leaches out to nearby waterways. These vats can also crack and form tears over time that allow their contents to seep out and enter the groundwater, making their way to bodies of water large and small.

Raising cattle for agricultural purposes, including to produce milk for use in dairy products, contributes heavily to deforestation, as land is cleared to grow the food needed for the cattle. The taste for milk in the United States requires the use of almost 44,000 square miles of land, an area almost the size of Virginia.

There are a number of ways that dairy farming weakens soil health. One example is soil plugging, which takes place when the ground is too wet. As the cows walk on the ground they compact the soil, making it harder for plants to grow. The same thing can happen when heavy machinery is used or moved over land that is too wet.

In addition to the harm done to the environment by intensified dairy production, using cattle to produce dairy in such large quantities has serious consequences for both the animals being used and the people who work with them or live nearby.

The cows who are maintained for their ability to produce milk frequently endure a range of health issues. Some of the most common are mastitis, lameness and infertility. Mastitis is a painful inflammation of a mammary gland that can be caused by infection or trauma. Mastitis is so common that it is broadly accepted that all dairy herds will have cattle that are affected by the ailment, though the proportion of the herd with the condition can range from 5 to 75 percent.

Along with the serious health issues that dairy cattle face on a day-to-day basis, they also endure both mental and physical suffering for the sake of producing milk. Dairy cattle are almost always pregnant, but once they give birth, their calves are taken away within hours, often to be sold as veal.

Working alongside animals that can weigh a ton or more is just one dangerous aspect of being employed by a dairy farm. The cows are not the only dangerous aspect of working on a dairy farm. Workers are also likely to be injured by heavy machinery and manure storage systems. The dangers of working in a dairy farm are compounded by the fact that in the United States most of the workers tend to be Hispanic laborers who often have no previous experience working in agriculture. This situation creates language barriers that make sufficient training more difficult.

The shift away from family farms towards large corporate dairy operations has caused many dairy farmers to struggle financially, reducing their ability to contribute to their local economies. The result is that less money is spent in their own community, which in turn translates to lower profits for the local businesses that farmers would have ordinarily frequented.

Growth Hormone Use in Dairy Cows

The primary hormone given to dairy cattle to encourage higher milk production is recombinant bovine growth hormone (rBGH). Estimates suggest that this hormone is given to almost 43 percent of dairy cows housed on large-scale farming operations in the United States and just over 17 percent of all dairy cows within the country. A number of other countries, including Japan, Canada, the EU member states and New Zealand have banned the use of the hormone. The motivation for banning the use of rBGH stems both from concern over unknown consequences for human health and concern for animal welfare. The use of the hormone has been linked to an increased risk of developing mastitis in dairy cattle.

What Is the Dairy Industry’s Carbon Footprint?

One of the most well-known studies relating to the carbon footprint of the dairy industry was published in International Dairy Journal in 2013 and found that for every kilogram of milk produced the amount of carbon dioxide produced was 1.23 kilograms. Since then industry professionals have sought to mitigate the emission of greenhouse gases with a range of management techniques, including offering different diets with various additives, even as the total number of cows raised for their ability to produce dairy has increased around the world.

Dairy Versus Plant-Based Milk: What Are the Environmental Impacts?

The question of whether dairy or plant-based milk has a greater environmental footprint can be answered simply by evaluating some key markers. Dairy milk outstrips all forms of plant-based milk due to its higher greenhouse gas emissions. It also requires 8.95 square meters of land in order to produce one liter whereas the next highest plant-based contender, oat milk, only requires 0.76 square meters. When it comes to the use of freshwater, dairy milk again requires the greatest amount to produce one liter at 628.2 liters, whereas the runner up, almond milk, requires only 371.46 liters.

Can Dairy Ever Be Environmentally Friendly?

The reality is that dairy is an inefficient source of nutrients, as only 24 percent of the calories consumed by cattle are converted into milk. This means that producing a gallon of milk requires four times as many calories as are in the final product. Because of this discrepancy, alternative sources of nutrients like soy milk offer a similar nutritional benefit while imposing a lower environmental impact on the planet.

Dairy foods like milk, cheese and yogurt have a massive negative impact on the environment. This impact can be seen in water and air quality, but also by taking the time to consider the experiences of the living beings, the animals and people that are impacted by the production of dairy foods. One of the best ways to stop contributing to the harms caused by the dairy industry is to simply stop eating dairy. Choose a milk alternative to enjoy with your morning cereal, dip your cookies into and add to your coffee instead.