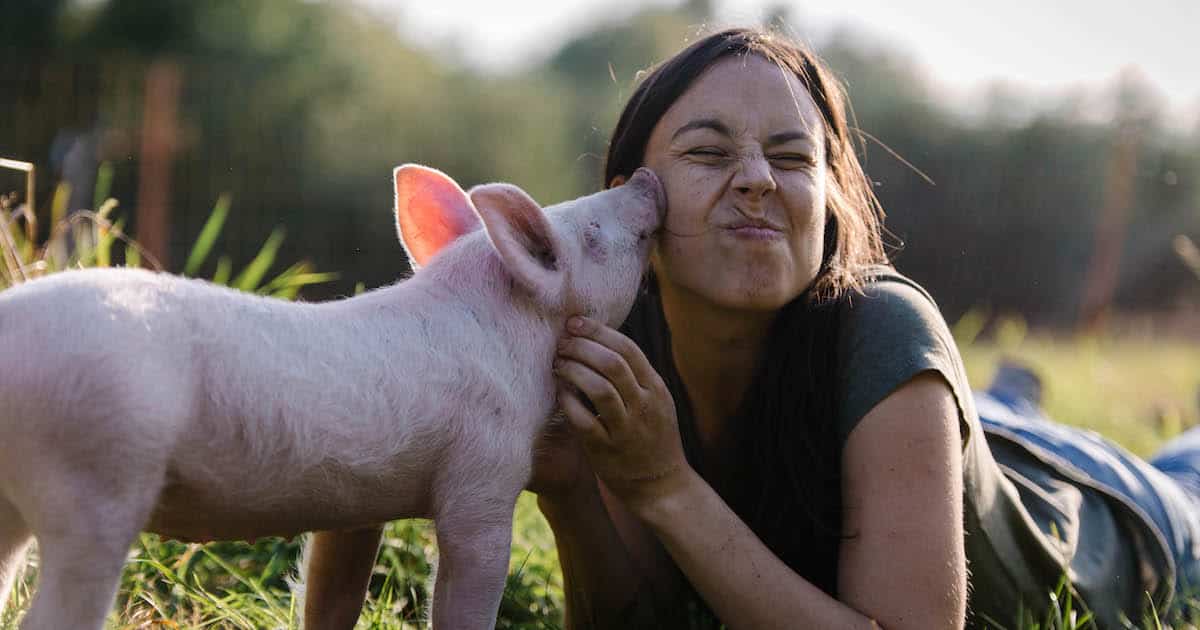 Staff members at farmed animal sanctuaries—where rescued food animals live out their natural lives free of harm and exploitation—regularly witness hearts and minds shift right before their eyes. Most visitors arrive at what they think is a typical petting farm with a simple desire to spend the day having fun with animals. But what sanctuary staff see, as those visitors meet a cow, cuddle a chicken, or spend time with a pig, is profound.

Unique connections are made at farmed animal sanctuaries. Visitors have the opportunity to interact with farmed animals and see them as living, feeling beings, often for the first time. They may even begin to see them as individuals not so different from a beloved pet or themselves. Many visitors are shocked to learn that the animals they just met would have been slaughtered for food if it wasn’t for the work of the sanctuary. They leave angry, optimistic, and interested in making personal changes. And these aren’t just anecdotes.

A recent study conducted by Faunalytics on behalf of Farm Sanctuary found that sanctuary tours do in fact lead to major changes in visitors’ thoughts and feelings about farmed animals and their treatment in the food system. Importantly, the study found that sanctuary visits can lead to changes in real-life behaviors. Of course, sanctuary staff would have told you this all along.

Between their two locations in California and New York State, Farm Sanctuary cares for over 900 animal residents and hosts over 10,000 visitors a year. For the study, 1,230 of those visitors completed two surveys, one on-site on the day of the tour, and one two to three months later. The results showed that visitors who ate animal products were more likely to report wanting to reduce their consumption of meat and animal products after the tour than before it and that their understanding of the link between dietary choices and animal suffering was stronger after the tour than before.

Of particular interest in the findings was the key role that animal cruelty education played. Though the purpose of moving farmed animals to sanctuaries is primarily to better care for the animals, many sanctuaries also offer public educational services regarding animal agriculture and veganism. Most surveyed visitors to Farm Sanctuary said that they were shocked and disgusted after learning about how animals are treated on industrialized farms. But the way in which Farm Sanctuary presented that information was also of great importance. According to Faunalytics author Tom Beggs:

Messages about the cruelty that farmed animals are subjected to is crucial, and was successful when paired with a soft approach to persuasion. Tour attendees learned the truth about factory farming from guides who presented information about how diet change can help but were not pushy or judgmental. Several attendees commented that they appreciated that the messages conveyed the necessary information, but felt balanced. They did not put so much pressure on individuals that they would become defensive.

As a result, the study found that sanctuary tours, particularly interactions with animals, paired with a balanced education, “can lead to important changes in attitudes, intentions, and behaviors.”

Raelle Schoenrock, who owns and runs Kismet Creek Farm Sanctuary, has seen the animals’ impact on visitors time and time again. Recalling one school tour, in particular, she says, “I’ll never forget when one middle school student suddenly made the connection that the food on her plate used to be someone.” She recalls the group had just left the chicken yard, “after feeding the hens sunflower seeds and watching them dust bathe. And the young girl turned to her dad, who was one of the chaperones, and casually asked him what was for dinner that night.” The father admitted it was roasted chicken. Schoenrock says the girl stopped dead in her tracks, looked back at the dozens of birds she had just met, and asked her dad if it would be those chickens being served for dinner that evening. “Well, no, not those exact chickens,” Schoenrock recounts the father saying. “No one eats those chickens, they don’t do that here. But yes, the chicken we eat is like them.” The young girl lifted her chin, Schoenrock says, and firmly stated, “Dad, I am not eating chicken for dinner. Maybe not ever.”

These situations are happening more and more at Kismet Creek Farm, Schoenrock reports. “I always have vegan outreach brochures on our counter too, and people grab them to take home,” she says. “Farm sanctuaries are having a huge impact on veganism.”

Jessica Walker, a 14-year-old student whose family runs Little Red Barn Sanctuary, has been conducting her own research regarding sanctuary visitors. She found that all of the visitors she surveyed showed an increase in empathy toward animals, as well as a desire to change their diets. “Many individuals have become vegetarian since visiting our sanctuary initially, and have remained so even after six months follow up,” she says, adding that many vegetarians have also gone vegan since visiting. “Overall decrease or complete elimination of certain farm animals from the diets was also evident. For example, if a person particularly connected with George the pig, they eliminated pork from their diet, and have continued to abstain from that meat product.”

At RASTA Sanctuary, president Lucie Cerny says that of the tens of thousands of meat-eaters they have hosted since opening in 2001, “the majority have since had a change of heart.” Of greater importance, she says, “is [that] those people have gone on to share the message of compassion with their friends and family thereby inspiring a boundless ripple effect.” Ultimately, Cerny adds, “While the education that we provide in our tours helps to set the fundamental groundwork, it’s the unique and very special connections that visitors make with our many rescued residents that help them to bridge the gap, and ultimately change their hearts and minds.”

That is precisely what the study at Farm Sanctuary found. That above all, it is the personal connection to individual farmed animals, perhaps for the first time in many visitors’ lives, that has the most magical impact.  As young researcher Walker states, “interaction with sanctuary farm animals does have an important role in breaking down the massive walls of disconnect to what we eat, and allows people to see animals as more than commodities or packages of cellophane-wrapped meat,” say says. “Programs such as ours play a tremendous role in educating individuals that farm animals are someone, not something.”

“Petting Farms” Become Popular Post-Lockdown, But They Aren’t as Cute as They Seem