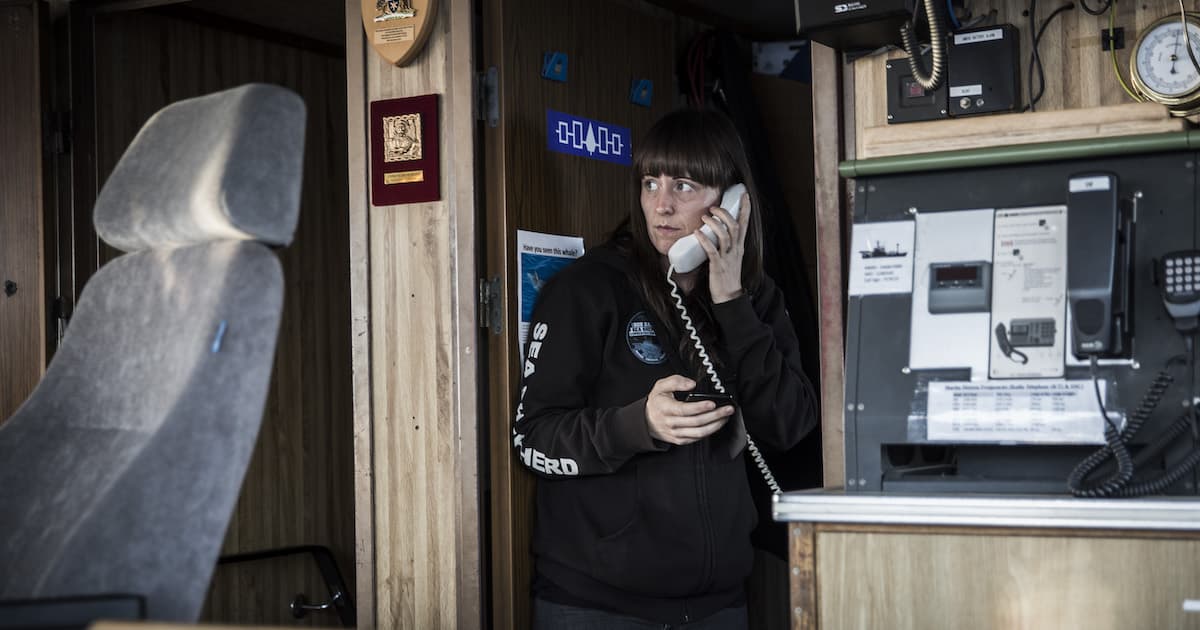 Settling alongside the dock in the port of Sund in August of 2015, I was one of 21 activists on board the Sea Shepherd vessel Bob Barker as we were refused entry to the Faroe Islands. We hadn’t anticipated any such issue during our transit from Bremen, Germany to the Faroes, an archipelago, under the protectorate of Denmark, located 230 kilometers northwest of Scotland. After all, we were the last of three Sea Shepherd ships to arrive at the Islands and our intention to dock in Sund had been discussed with port authorities well in advance. But looking down at the excessive double-page cross and bold “Refusal of Entry” statement in my British passport was quite the reality check.

As the Ship Manager, I’d welcomed the Danish customs and immigration officers on board, presented all the necessary documentation, and complied with a thorough inspection of the vessel. Then, as I handed over the crews’ passports, I was told we were being refused entry and had 24 hours to leave the Faroe Islands’ 12-nautical-mile territorial limit. To this day, I’m still not convinced this action by the Danish authorities was entirely lawful. The Refusal of Entry notices were issued for suspicion of “affecting public order,” although the documents themselves gave no clear legal reason for denial.

So, what was all the fuss about? Well, the purpose of our visit to these remote islands—between Iceland and Norway—was to directly intervene in the mass killing of around 850 small cetaceans; primarily long-finned pilot whales and Atlantic white-sided dolphins.

The grindadráp, or ‘grind’ as it’s more commonly known, is a style of drive-hunting with boats that involves herding entire pods into shallow bays where the animals become beached on the shore and are then brutally slaughtered and butchered with lances.

In the Faroe Islands, this type of whaling activity dates back to at least 1584, when records first began and continues today—despite increasing pressure from the international community to stop. There are no seasons, no quotas, and therefore no limits on when the hunts take place or how many animals are killed. Supposedly, the meat and blubber of the cetaceans are distributed amongst members of the local community and eaten. The hunts have attracted criticism for decades, but the Faroese maintain it’s a sustainable practice and an important cultural tradition.

Pilot whales are considered to be a natural resource and they are ‘harvested’ with hooks, ropes, and mønustingari (a Faroese knife designed to cut through whales’ spines), allegedly without any impact on their wider population. According to the Communication Advisor at the Ministry of Foreign Affairs and Culture of the Faroe Islands, the meat replaces food that would otherwise need to be imported and has therefore enabled the Faroe Islands to maintain a relatively high degree of self-sufficiency in food production.

Yet health concerns about the high levels of mercury and PCBs present in the meat have led the Faroese Head of Public Health Administration, Pal Weihe, to advise against consuming it. “We find it so problematic for the health of the Faroese to eat it that we have asked them to make this cultural sacrifice,” said Weihe.

Outrage over outdated cruelty that cannot be justified

Clearly, it’s a complex issue. Although pilot whales are not classified as endangered, their population numbers are unknown and, as a result, it’s difficult to assess just how the slaughter of large numbers impacts resident groups. For that reason, we can’t say with any degree of certainty that these hunts are sustainable or that they genuinely provide an essential food source in the modern age.

Cetaceans are known to exhibit intricate social behaviors, and the strong family bonds that they form are well-documented. Consequently, as highly evolved sentient creatures, it’s somewhat incongruent to assume the grind’s herding and killing process doesn’t inflict fear and distress, as well as the visible prolonged physical suffering. Exterminating entire family groups of cetaceans in front of one another raises serious ethical questions, as individuals have been observed swimming around in the blood of their kin for hours on end.

Supporters of the grind argue that the hunt is no different to killing animals for food in the slaughterhouse—except that as wild animals they won’t have experienced a life of misery on a factory farm beforehand. Despite being wholeheartedly opposed to hunting, there’s a part of me that has to agree here. The killing of animals for food is so unfamiliar to the vast majority of us that we have no idea how those conveniently packaged products in the supermarket came to be.

Globally, the cultural differences in which animals we eat and which animals we don’t add an additional layer of complexity when condemning the actions of others. I think that’s why I’ve always found it so difficult to debate the grind issue. No, I don’t agree with it but I recognize the legitimacy of at least some of the arguments. Like whaling in Iceland, it seems to me that local opponents of the hunt are even more opposed to outsiders telling them they’re doing something wrong, and so, would then side with the hunters as the lesser of two evils when pushed. I get that and genuinely believe that change can only come from within.

On September 12, 2021, perhaps the turning point we ‘antis’ had been waiting for finally arrived. The Faroese grind faced renewed scrutiny after more than a staggering 1,400 Atlantic white-sided dolphins were hacked to death on the Skalabotnur killing beach in Eysturoy. The scale of slaughter sparked not just international outrage but also local indignation as the hunt became the single largest mass killing of marine mammals in history. The chairman of the Faroese Whalers Association even went as far as telling the BBC that “it was a big mistake” with participants vastly underestimating the size of the pod. That’s the first time I’ve ever heard an active member of the grind community publicly denouncing a hunt.

The Faroese Prime Minister, Bárður á Steig Nielsen, has also stated the government will evaluate the regulations on catching Atlantic white-sided dolphins in response to the bloodbath—drawing attention to the question of what part the hunt should play in Faroese society. I’m hopeful that change is coming, but I don’t plan to hold my breath waiting for it (note that the review excludes the killing of long-finned pilot whales).

Although authorized and within the bounds of Faroese law, the killing of white-sided dolphins for some reason is far less popular with the Faroese public than the slaughter of pilot whales, and there have been far more disgruntled voices speaking out than previously. Just one quick poll following that now infamous grind indicated that just over 50 percent of locals said no to the question of whether the Islands should continue killing dolphins. When asked in a separate poll about the slaughter of pilot whales, however, 80 percent expressed a wish for it to continue.

A better deal for the money-makers

When it comes to talking about a need for cetacean meat in the Faroes, I have considerable doubts about the plausibility of such an argument. It isn’t unheard of that meat and blubber from the grind ends up being disposed of—unwanted carcasses are dumped at sea and the blubber incinerated. So, it certainly wasn’t a surprise for me to read the next headline, that the Faroe Islands killed so many dolphins “they had to destroy their blubber.” What a waste.

Since then, petitions calling for an end to the grind have reappeared all over the place and lots of us are signing away. But for UK residents, the most important action is likely signing a parliamentary petition urging the government to suspend its controversial trade agreement with the Faroe Islands—a deal that allows for £100 million of wild-caught and farmed fish to be exported into Britain every year—until all whale and dolphin hunts end. To earn a parliamentary debate, the petition needs to hit the 100,000-signature target by March 21, 2022.

In response, the government has stated: “The UK strongly opposes the hunting of cetaceans and is committed to upholding high animal welfare standards in its trade relationships.” Nevertheless, on February 9, 2022, came the announcement that a new deal between the UK and the Faroes has been signed, less than six months after the record dolphin massacre. It’s incredibly disappointing and indicates a complete lack of political will to take action where there is the power to do so. This decision really does fly in the face of public opinion and favors a disgraceful £5.5 million worth of fishing rights and bloody hunts over a better objective: to transition our food systems away from animal slaughter.

As concerns about the climate emergency and the sustainability of red meat rise, UK consumers are increasingly turning to fish. But that isn’t a solution. Learn more about the issues facing our oceans by watching Seaspiracy, in which the grind also features, and sign-up to Viva! emails for all the help and support you need on your vegan journey.