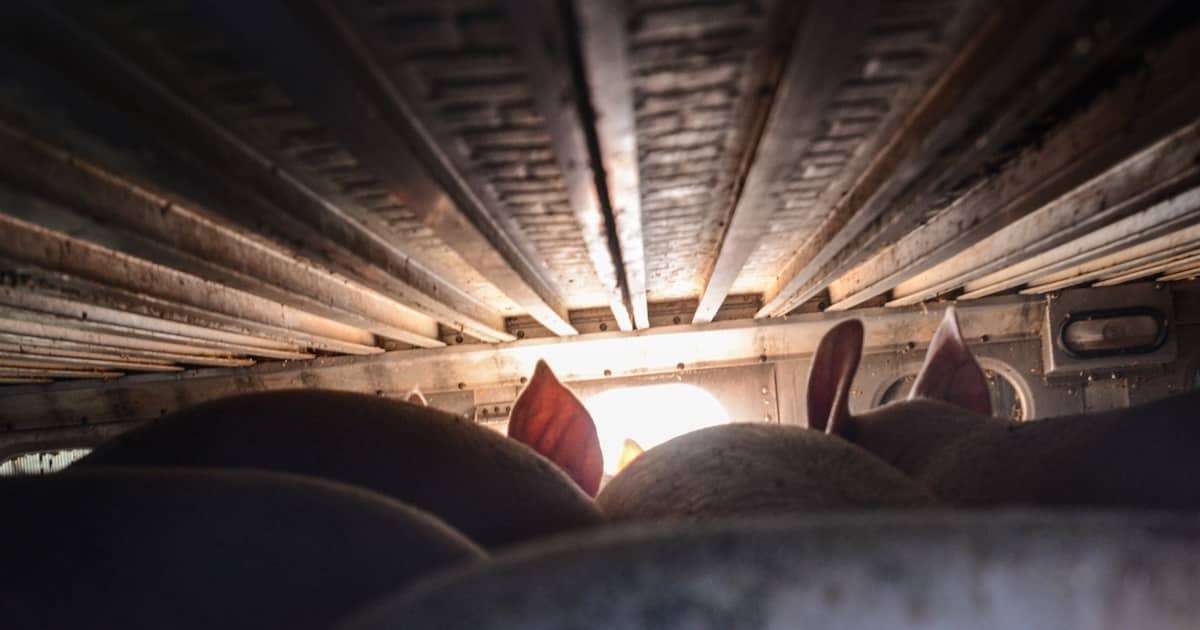 Our Food Systems Are Complicated. Food Data Doesn’t Have to Be.

In the early hours of dawn, a pig is forcefully prodded out of a filthy, crowded trailer onto the bare cement blocks below, where he promptly flops down. He wobbles as he attempts to stand up and looks around, fearful, hungry, and dehydrated. After spending the last 48 hours in a freezing trailer, he is disoriented and barely manages to stand as he is ushered along with the rest of the terrified, shrieking drove into an inspection bay. Soon, the pigs are ushered onto a 16-hour cargo flight to their final destination. Within the week, they will be slaughtered.

The pig is part of a thriving global trade in which over 5 million live animals are transported every day by tractor-trailers, air cargo flights, trains, and shipping vessels. Over 80 percent of the animals transported are for slaughter while the remainder is used for breeding. Valued at over $22 billion, the global trade in live animals has increased 140 percent over the last two decades. In 2017 alone, 45 million hogs, 11 million head of cattle, 16 million sheep, 5 million goats, and 1.9 million poultry were transported around the globe.

Recently, there has been a dramatic increase in livestock transport. Major airlines reportedly added 50 percent more livestock flights in response to soaring demand for beef and other animal products in 2020. Water-scarce countries in the Middle East such as Saudi Arabia, Israel, and Lebanon import live animals as it is a cost-effective option that strategically shifts the water and resource burden to other parts of the world. The increased global demand for meat, primarily driven by the burgeoning human population and an emerging middle-class, has led to the massive increase in the live transport of farmed animals, journeys that can last anywhere from a few hours to a few months.

Animals transported for slaughter are routinely crowded within filthy, ill-maintained containers in which the maximum loading density is routinely exceeded. Loading and unloading thousands of animals into containers for transport is an ugly, stressful process frequently involving electric prods that aid in ushering the frightened animals into transport containers. Abusive practices by handlers leave the animals bruised, injured, and, in some cases, dead.

Transport vehicles often have poor ventilation and can become breeding grounds for zoonotic diseases. Stressed animals are transported for days and even weeks with minimal water and food. Drivers are routinely able to skip the legally required rest stops and push the animals past their total transport hours because the rules and regulations that govern animal transport are often vague, inadequate, and poorly enforced.

Public awareness of the inadequate enforcement of existing laws and the lack of jurisdictional authority to protect live animals in transit across international borders has brought plenty of scrutiny to the practice. In 2020, the European Parliament voted to establish an inquiry committee to investigate the violations of existing laws in the transport of live animals across and out of the European Union. In an attempt to reduce the live animals being transported from Europe across destinations as far as Thailand and Uganda, animal welfare campaigners have urged that the export of meat and carcasses, as opposed to living animals, be explored as a more humane alternative. More recently, England and Wales moved to ban the export of live animals for fattening and slaughtering, while excluding poultry exports and exports cited for breeding purposes.

The federal mandates that currently evaluate the welfare of live animals transported for slaughter and breeding in the U.S. are minimal. The Twenty-Eight-Hour Law, written in the 1800s for animals transported via rail, has undergone surprisingly few amendments over the years and is the only law governing live animal transport on land in the U.S. The law, enforced by the United States Department of Agriculture, does not address animals transported by air or water and also excludes poultry, which represents the largest segment of factory farming in America.

While the law states that live animals in transit have to have deboarded for five consecutive hours for feeding and rest every 28 hours, it does not apply to animals transported for breeding or feeding purposes. The law also makes provision for “accidental or unavoidable causes” that prevents the animals from being unloaded. Violators are fined “at least $100 but not more than $500” for each downed animal.

Not coincidentally, 726,000 pigs, 29,000 cattle, and nearly 4 million chickens die in transit every year in the U.S. alone. Internationally, the U.S. is an emerging leader in the global meat trade, sending a record amount of pigs to China in the first five months of 2020.  As the demand for meat continues to grow, the U.S. will play a significant role in the transport of farmed animals, as well as the enforcement of welfare standards, or lack thereof, along the way.

Farmed Animal Transport: The Cruelest Leg Along the Road to Slaughter