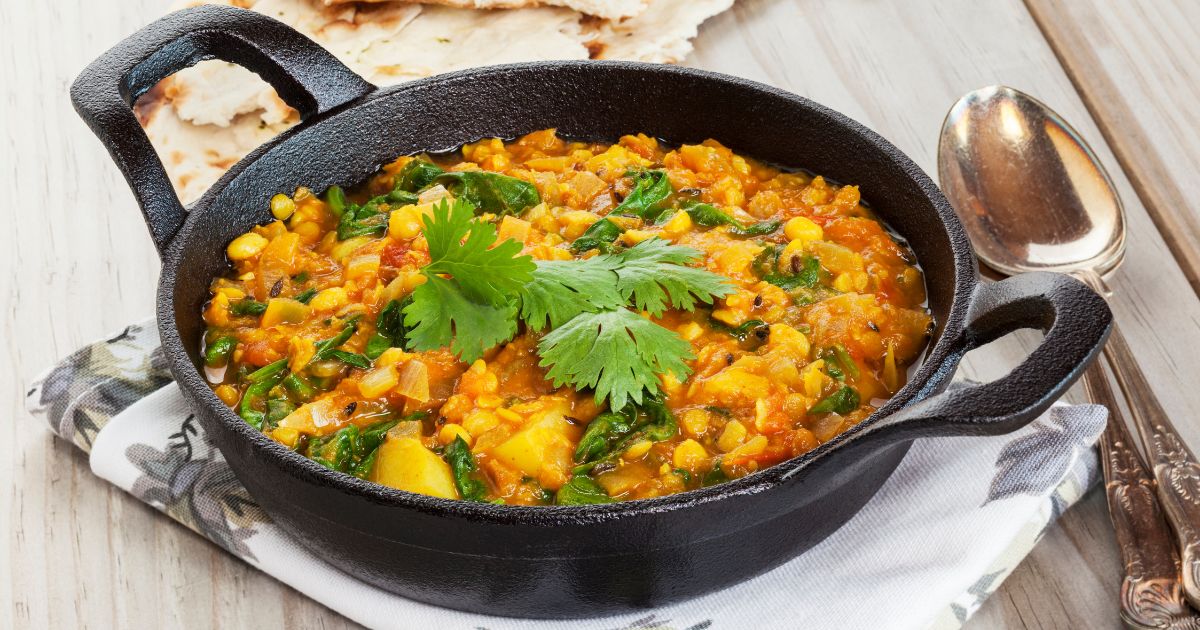 Increasing numbers of U.S. consumers are trying plant-rich diets such as vegetarianism. The dietary practice of abstaining from eating meat has ties to a wide range of social movements and ethical positions. But this worldwide trend also has varied roots in Asia, Africa and Indigenous cultures — something that can be easy to miss as we browse recipes online or order takeout food.

Some adhere to a vegetarian lifestyle because of ethical beliefs about reducing harm toward animals. Health is another value that many vegetarians share. Some vegetarians are private about their diet, and others are more public. Vegetarianism can also be a social identity: vegetarians can find each other and form communities based on their shared experiences.

The vegetarian standards of individuals and groups can vary and also evolve, resulting in complexities in the vegan and vegetarian experience. For example, PETA used not to oppose the eating of eggs from companion birds if they were well-cared for and not purchased from hatcheries, but now omits that exception to their position.

Vegetable-based diets that avoid the consumption of meat are often tied to belief systems that have roots in ancient history. Diets that abstain from meat and avoid harm to living beings were first documented in religious texts dating back to fifth century B.C. in India. When the British colonized India in the 17th and 18th centuries, they observed vegetarianism in practice and went on to popularize the practice back home to other Europeans, according to one British historian.

Many peoples indigenous to the Americas had plant-based diets that preceded contemporary vegetarianism. The Choctaws of present-day Mississippi and Oklahoma were farmers whose diet was primarily plant-based, with infrequent consumption of game meat. A corn, pumpkin and bean stew was a staple food of Choctaws, who also wore plant-based clothing and who revered corn as a divinity. Aztecs and Mayan people are reported to have raised their children as vegetarians. Many other grains, legumes, fruits and vegetables in today’s domestic pantries, particularly those of vegans, are the result of agricultural advancements of Indigenous peoples, including tomatoes, potatoes and paprika.

Indigenous and diasporic Africans also have plant-based traditions that sustain today’s vegan movements. In Africa, Ethiopian food traditions have catered to semi-vegan diets since antiquity as a result of many Ethiopians’ adherence to the Ethiopian Orthodox Church’s fasting practices.

In the 1930s in Jamaica, Rastafarians developed a movement of Black vegetarians who opposed systems of oppression under British colonial rule and neo-imperialism. Rastafarians saw spiritual divinity embodied in Ethiopian leader Haile Selassie, who was referred to as Ras Tafari until he became emperor in 1930. Ras means chief in Amharic, the language spoken in Ethiopia. Since the 18th century, Black people active in U.S. social and religious movements have often identified with Ethiopia due to its central presence in the Bible, as explained in Horace Campbell’s Rasta and Resistance. The Ethiopianism movement solidified in South Africa in the 1870s, Campbell writes, spread throughout Africa, and contributed to the formation of the Rastafarian religion.

Ethiopian vegan dishes, like Rastafarian “Ital” foods, also have distinct histories tied to anticolonialism. Ethiopia’s victory against Italian invasion in 1896 was a significant sign of resistance, giving hope to Africans and Black people around the world organizing against white supremacists. Each year on March 2, Ethiopians celebrate that their country was the only African nation to successfully resist the European partition of Africa.

Why Choose a Vegetarian Diet?

Health is a commonly cited reason for people to pursue a vegetarian diet. Reducing harm toward the environment and to animals are also popular reasons for going vegetarian.

In India about one-third of the population is vegetarian, partly the result of social taboos around eating meat. These social stigmas can make it difficult to measure people’s fidelity to their self-described diets. Not eating meat in India can also be a matter of having little disposable income, living in rural areas and living in cultural isolation. These latter reasons for following a vegetarian diet reveal some of the diverse socioeconomic factors that complicate researchers’ understandings of dietary trends.

What Is a True Vegetarian?

There is no such thing as a “true vegetarian” in any generally accepted sense. However, academic researchers have used this term to describe people who choose to abstain from eating meat, poultry and fish. The term can be useful for researchers studying human behavior since a significant number of self-described vegetarians do eat some meat, according to nutrition surveys in the United States. Researchers also describe vegetarians who eat meat as semi-vegetarians or part-time vegetarians. Pesco-vegetarians eat fish, dairy products and eggs, but no other types of meat.

Some vegans regard vegetarianism as inconsistent, even characterizing vegetarians as hypocritical for consuming animal-derived products like dairy and eggs. But the characterization of vegetarians as hypocritical ignores the reality that there are many different reasons why some people choose to be vegetarian, according to the Vegetarian Resource Group. These include economics, health, the environment, disliking the taste of meat, compassion for animals and a range of other ethical principles. Vegetarians are simply people who do not eat meat, which includes fish and poultry.

To make matters more complicated however, because some self-described vegetarians do sometimes eat meat, discussions about the term can become challenging. When vegetarians are motivated by moral ideals such as not wanting to harm animals and then still eat meat, they may feel a tension between their beliefs and their behaviors.

The discrepancy between someone’s attitudes and their actions can be described as a form of hypocrisy — though the term has negative connotations and assigns unpleasant qualities to a person or organization. To deal with the difficult feelings that arise from consistently living out of alignment with one’s values, people develop coping mechanisms such as avoiding thinking about farmed animals or eating meat products that do not resemble the original animal.

Animal advocates who are interested in changing consumer habits have found that focusing on moral hypocrisy, however, is not necessarily helpful in achieving their goal of reducing meat consumption. In a 2021 survey of British respondents, the Humane League UK found that people were more likely to be swayed to sign a petition for farmed fish when they were told about the disgusting health of farmed fish, compared to when they heard messages about the corporate hypocrisy of supermarkets. The message about corporate hypocrisy did, however, resonate with anti-corporate vegans in the study.

While food and nutrition researchers classify vegetarian diets into different categories, two of which are listed below, there is significant heterogeneity of diet within each grouping of vegetarians. It all boils down to the individual experience of someone who is trying to eat in a certain way.

Vegans exclude all animal products from their diet — and lifestyle — to the extent that is practical and possible. Vegan diets typically exclude meat, eggs, honey, dairy and other animal-derived food ingredients.

What Do Vegetarians Eat?

Vegetarians eat fruits, vegetables, leafy greens, nuts, beans, legumes, grains and food products that are derived from these ingredients. Vegetarians can make simple meals quickly at home or they can purchase ready-made food from the supermarket or restaurants.

How Do Vegetarians Get Protein?

Vegetarians can get protein simply by eating a variety of foods. Some popular sources of protein include beans and legumes — like chickpeas, peanuts, black beans and soy.

What Foods Do Vegetarians Not Eat?

Vegetarians do not eat foods that have meat or animal products in them, including ham, chicken, or beef, or a soup with bone broth.

What Are the Benefits of Vegetarianism?

Many people adopt the vegetarian diet because it is associated with lowered risk of chronic diseases such as diabetes, high blood pressure and cancer. People who value animal welfare and animal rights can also feel better eating vegetarian foods, knowing that their diet will exclude their animal friends. Another benefit of vegetarianism is that it is considered better for the planet, and a way to mitigate climate change.

The information below is summarized from Vegan Health.

Vegetarians who do not eat eggs or dairy products should take vitamin B12 supplements and eat foods that have been fortified with the vitamin, according to nutritionists and vegan health professionals. B12 is found in meat, eggs and dairy, but it is not usually found in plant foods. However, it is made by bacteria, so B12 supplements are available that are not derived from animal products.

Plant foods with higher amounts of zinc in them include oatmeal, tofu, cashews, sunflower seeds, garbanzo beans and lentils. Zinc is not typically difficult for vegans to find in their diets, but like iron it is harder for them to absorb from their foods due to phytates that are found in plant foods.

How To Make the Change to a Vegetarian Diet

Organizations based in the United States and Europe have developed programs to support individuals seeking to make a change toward a vegetarian diet. Sentient Media’s Take Action resource webpage includes a section on Dietary Change that includes a 30-day pledge program, petitions for plant-based options in public schools, and other events.

If you haven’t already done so, you can read more articles to help you reduce meat in your diet. To help you consider a more vegetarian diet, check out Sentient Media’s plant-based guide and recipes.

Is Soy Good for You?