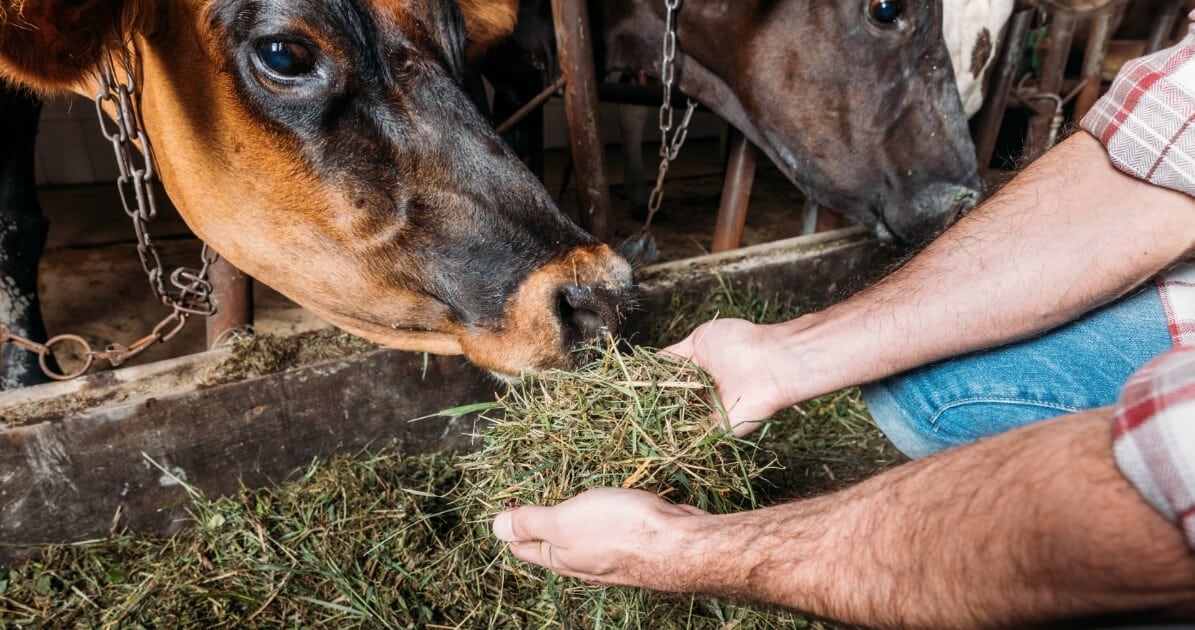 Cows are victims in institutions that seek to knock them down. For the most part, they are objects to be slaughtered, milked, marinated, grilled, and worn. The conditions in which cows are farmed in North America are bad for the environment, though cows themselves are merely surviving those conditions as source materials for Ben and Jerry’s ice cream and beef jerky, among other products of today’s food systems.

Are Cows Bad for the Environment?

While cows as a species are not inherently bad for the environment, the way that industrial farmers raise cows for food and other commercial purposes has harmed the environment. The immediate environment in which cows are farmed includes their barns, grazing pastures, milking parlors, and feedlots, and extends to ecosystems on local, regional, and planetary levels. This article will focus on the broader environmental impact of cattle farming on non-cows.

The way cows are farmed results in greenhouse gases that warm the earth’s atmosphere, contributing to sustained changes in the weather known as climate change. The effects of climate change include cycles of extreme weather like floods, excessive rain, and droughts. Climate change is also resulting in harm to ecosystems, such as the acidification of the ocean due to warmer waters. Greenhouse gases released as a result of cow farming include methane, carbon dioxide, and nitrous oxide.

Greenhouse gas emissions from cow farms indirectly contribute to increased respiratory disease in humans. Methane is reportedly responsible for about half a million deaths per year due to respiratory illnesses resulting from increased ozone levels. A substantial portion of human-caused methane emissions (44 percent) is created by the livestock industry, mostly from cows.

Animal farm workers and farmers need to wear respirator masks to protect them from poor air quality on the job, but often do not receive adequate training or equipment to do so. Migrant dairy workers in Vermont reported headaches, itchy eyes, cough, and breathing difficulties. Exposure to toxic air from animal waste, feed, and bedding at a dairy farm can cause respiratory disorders such as Farmer’s Lung and allergies, and “inflammatory reactions, fatigue, weakness, headaches, and gastrointestinal problems in farm workers,” according to a 2021 study by Bindu Panikkar and Mary-Kate Barret in the International Journal of Environmental Research and Public Health.

Raising cows requires using a lot of water, at a higher rate than other types of meat and crops. It reportedly takes about 600 gallons of water to make one hamburger, and about 300 hundred gallons of water to make one Starbucks Frappuccino, and these numbers vary depending on who calculates the water footprint. Waterways are drained not just by the water consumed directly by cows, or the water used to clean their facilities and their carcasses, but also for the water that it takes to raise the crops that feed the cows.

Land that is cleared to make large swaths of crops is typically tilled and eroded, resulting in fertilizer run-off that pollutes bodies of water downstream from those farms. Industrial-scale dairy farms directly pollute waterways by pouring a toxic slurry of manure, chemicals, and water into them.

Habitat loss is normally associated with non-human species, but cattle ranching is directly linked to the loss of the ancestral homes of Indigenous communities as well. Clearing land for cattle ranching is a current concern of Indigenous communities in Brazil’s Amazon region, as previously forested habitats for humans and biodiverse ecosystems alike are destroyed. In the present-day, western United States, colonialists also took over the lands of American Indians, often in the name of cattle ranching.

In Oklahoma, cattle ranching in the 19th century by settler colonists contributed to the “disappearance of many wild fruit plants, turkeys, deer, and pollinators,” writes Devon Mihesuah in Indigenous Food Sovereignty in the United States. Cattle grazing near Mihesuah’s family lands by ranchers has led to destroyed habitats in recent times as well. Clear-cutting of neighboring cottonwood trees for cattle grazing in 2016 resulted in the loss of habitats for “bass, carp, catfish, crappie, perch, and turtles” at Little Beaver Creek, according to Mihesuah.

The demand for beef is a major driver of deforestation, which results in land degradation including soil loss. In turn, land degradation hurts communities by exacerbating climate change and biodiversity losses. In the western United States, cattle grazing on public lands is a primary culprit not only for the endangerment of native species but also for desertification.

After displacing Indigenous people from land that they had stewarded for thousands of years, European settlers throughout the 19th and 20th centuries compromised the health of the soil in North America with their soil-tilling practices, which also contributed to global warming by releasing carbon dioxide “from the soil into the sky,” according to Leah Penniman in Farming While Black. Settler farmers replaced native grasses in the prairies with thirsty, annual crops like wheat and corn.

The subsequent production of monoculture corn, on a massive scale, is closely tied to the modern cattle business. Corn is considered a type of grain. Grain was originally fed to cows to fatten them prior to being transported for slaughter, a practice that continues into the 21st century. About 36 percent of corn grown in the U.S. is fed to livestock, including cattle.

How Do Cows Contribute to Global Warming?

Global warming occurs as a result of increased levels of greenhouse gases in the atmosphere. Raising cows for agriculture results in three main heat-trapping gases being released into the atmosphere: carbon dioxide, nitrous oxide, and methane, according to Denis and Gail Hayes in Cowed. Scientists measure and estimate the amount of these gases released during the following processes: growing and processing feed crops, how cows digest their food, and the decomposition of manure.

Cow farmers contribute to the release of carbon dioxide into the atmosphere when they cut down forests and clear land, to build feedlots and grazing pastures. The vehicles and machines used to transport cows, along with their feed, water, waste, and bodies run on fossil fuels that also produce carbon dioxide. The industrial production of feed crops also results in carbon dioxide release. Nitrous oxide is produced when cow manure breaks down. Cows produce methane when they burp and exhale, a by-product of a digestive process known as enteric fermentation, and also when their manure is spread and stored.

Facts about Cows and the Environment

Why Is Methane Bad for the Environment?

Just as cows are not “bad” for the environment, methane is also not inherently bad for the environment. It is a naturally occurring gas that protects the earth’s climate by helping keep it warm. Methane is a primary ingredient for natural gas, the same fuel that we use to light our stoves. The problem with methane, however, is that humans in the Global North are overproducing it as a result of industrialization, to the point of throwing ecosystems out of balance. Agriculture produces about 40 percent of methane emissions in the world.

Methane is more potent at warming the earth than carbon dioxide, as far as greenhouse gases go, and most methane emissions (60 percent) are generated by human activity. It is an important emission target for policymakers because it leaves the atmosphere more quickly than carbon dioxide.

What Are Other Sources of Methane Emissions?

Drilling for oil and natural gas is another major source of human-caused methane emissions, as are landfills, wastewater emissions, and coal mine emissions. Rice farms also produce methane. Peat bogs and other wetlands, wild animals that eat plants, and bodies of water are natural sources of methane emissions.

How to Reduce Methane Emissions?

The task of reducing methane emissions is a practical concern for countries, nations, and advocacy groups that are seeking to collectively lower the rate of global warming. Methods to reduce methane emissions from cows can include changing the types of food they eat, reducing food waste, halting deforestation practices for pasture and growing feed-crops, reducing the consumption of animal products in higher-income countries, and passing evidence-based, people-centered public policies to protect the environment, according to the FAO. Technologies also exist that minimize methane leaks when drilling for oil and natural gas, which can be put to use with the passage of strong governance and increased public scrutiny.

With increasing attention to the impacts of climate change, cattle farming is increasingly coming under fire. The conditions in which cows are farmed—from clearing land to cultivate corn to the feedlot and the slaughterhouse—are detrimental to the air, water, habitat, and soil. Even while putting aside the specific welfare of cows as their bodies are exploited for human consumption, the living conditions of all beings on Earth are threatened by the increasing demand for cow products. The political push to curb climate change requires reforming food and energy supply chains sprung from centuries of entrenched business practices.