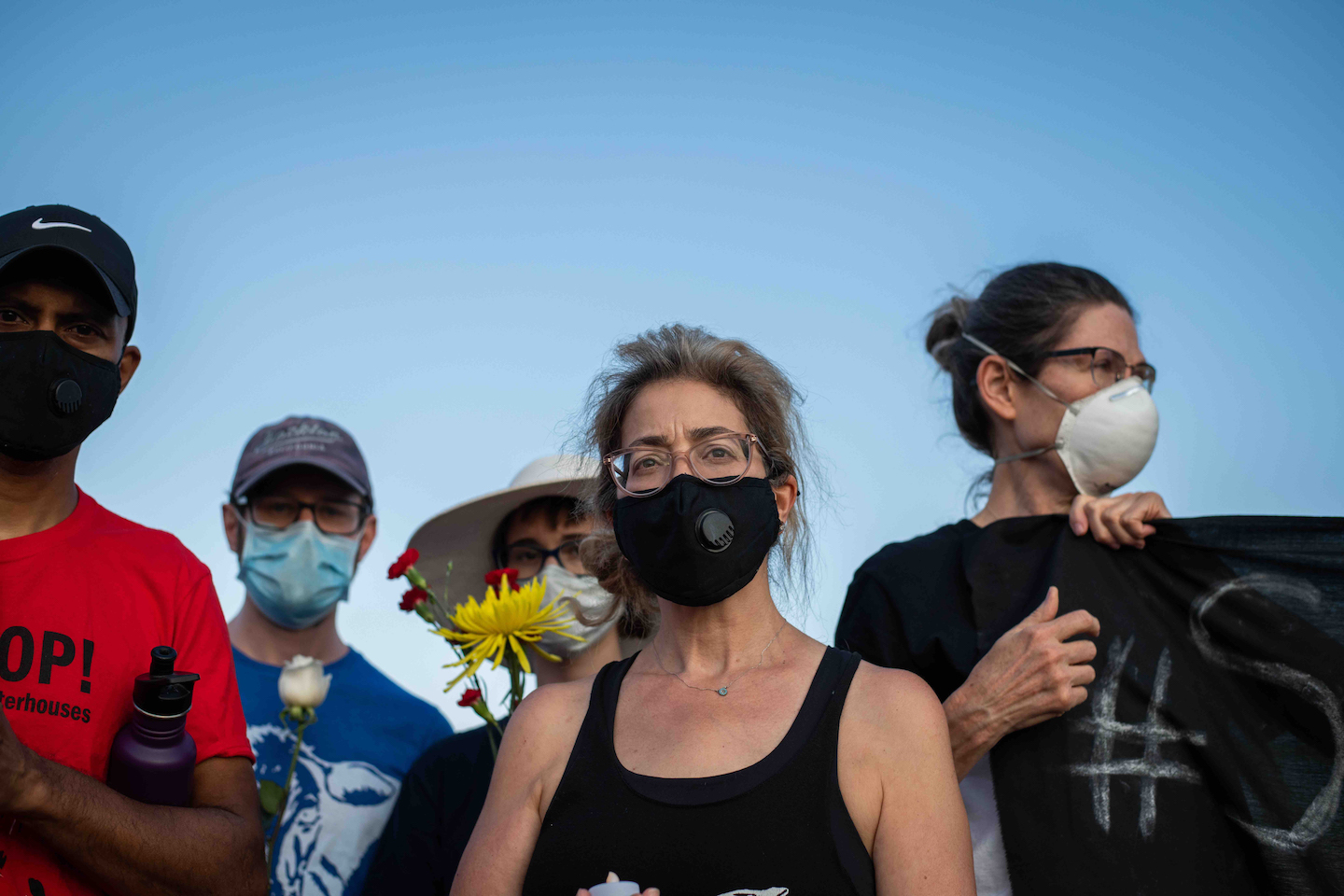 On June 19, Regan Russell was killed outside a meat-packing plant by a pig truck as she protested new “ag-gag” legislation. Recently, Russell’s activist friends gathered with signs at the slaughterhouse where she was killed to push for criminal charges against the driver who ran her down. Counter-protesters, including truckers supporting the one who killed Russell, attended the rally, holding signs asserting that “Regan Committed Suicide” and cooking pork hotdogs.

Vegan activists like Russell and her supporters make many members of the public uncomfortable, which may explain the counter-protesters’ antagonism. Vegans’ existence, as activists or not, exposes the cognitive dissonance involved in meat-eating. Cognitive dissonance, the process by which our brains try to reconcile behaviors inconsistent with our beliefs, lets us be outraged by puppy mills but indifferent to factory farms. To view ourselves as animal lovers while eating meat requires subconscious strategies such as believing that eating meat is necessary for survival. Hundreds of thousands of vegans surviving on plant-based diets inadvertently undermine these strategies by merely existing; they compel meat-eaters to acknowledge that, for many, meat-eating is a choice, rather than a necessity. To continue to feel untroubled, meat-eaters must employ a series of novel justifications, including adopting the view that vegans are in the wrong. Meat-eaters may also rely on stereotypes of vegans as militant, hypocritical, or irritating, whether they advocate for animals in other ways or not. By virtue of their activism or mere existence, vegans oblige animal eaters to confront a habit that they do not want to examine.

Vegans and vegan animal activists like Russell are not the only targets of public disfavor. The public disdains activists in general, even those who represent causes with which the majority generally agrees. In one study, people admitted to being less likely to adopt environmentally-friendly practices because of biases they held against environmentalists. They described typical environmentalists as “tree-huggers” and “hippies” and typical feminists as “man-hating.” In another study, college students described themselves as less likely to befriend people who are active in political and social causes by attending rallies and protests. But even while feeling discomfort with activists, the public overwhelmingly agrees with their causes: two-thirds of the American population think that the federal government should be taking stronger action on climate change, and at least as many, across the political spectrum, say that it is “very important” for women to have equal rights to men. The public persists in negatively stereotyping activists even when agreeing strongly with their causes.

Not all activists fit within the stereotypes associated with their specific causes, but even “atypical” activists may face public disapproval and backlash. Since George Floyd’s murder, Black Lives Matter (BLM) demonstrators have numbered 15 to 26 million; many of these millions are new to racial justice activism. Still, Trump is attempting to foster public dislike of even these atypical activists, calling BLM “a symbol of hate.” When activism is perceived as a threat to the majority’s power, it may incite backlash, whether activists are “stereotypical” or not and regardless of the broad base of support for the cause.

Activism is important because it can be effective, even when it is unpopular. Activists―sometimes breaking unjust laws―play a vital role in advancing rights in a democracy, and public disfavor is not an indicator of whether a movement will ultimately succeed. The Silent Sentinels, a group of suffragists who picketed outside the White House for two years starting in 1917, endured harassment and unjust treatment from counter-protesters and law enforcement. Suffragists’ struggles against popular opinion, though, ultimately succeeded in securing women’s right to vote when the 19th Amendment was ratified in 1920. Around the time when Rosa Parks refused to give up her seat on a segregated bus in Montgomery in 1955, civil rights activists like Parks were seen as “dangerous,” though they are now celebrated. After both the Civil War and the assassination of Martin Luther King, Jr., the white majority lashed out against Black progress connected with surges in support for slavery abolition and civil rights causes, respectively. Despite the backlashes, abolitionists and civil rights activists each ultimately saw legal success when the 13th Amendment abolished slavery in 1865 and the Civil Rights Act granted civil rights to Black Americans in 1964. The current backlash against the BLM movement indicates that despite its recent momentum, the struggle for racial justice is not over. The majority may not always perceive how current laws and the systems upholding them are unjust; activism can be effective by forcing public discourse that is crucial to creating change in a healthy democracy.

Animal rights activists are currently seeking to effect change in the same hierarchical system of oppression that causes both human and animal suffering. The movement is fighting to end humans’ oppression of animals for food, clothing, entertainment, and scientific research. The suffering of animals is not negligible—for food alone, globally, 72 billion land animals and 1.2 trillion sea animals (most as bycatch) are killed by humans every year. If humans ended the lives of each other at the same rate as we kill animals, our species would be extinct in less than six weeks. In the U.S., 99 percent of animals raised for food live their entire lives in captivity on factory farms, often in unclean and cramped conditions; they are killed at fractions of their natural lifespans. Animal activists are striving for systemic changes that protect animals from being used as a means to satisfy humans’ ends.

Animal activism is a movement in progress. Though predictably unpopular, animal rights activist groups are growing influential enough to claim limited stakes in political decision-making. In Canada, for instance, animal groups including Animal Justice Canada were recently consulted prior to the passage or amendment of several federal animal welfare laws—Bill S-203, on ending cetacean captivity; Bill C-68, to end the importation and exportation of shark fins; and Bill C-84, proposed to strengthen protections for animals against bestiality and prizefighting. Also in Canada, last year, animal rights and welfare organizations including Mercy for Animals were consulted about farmed animal legislation before the Canadian government amended its animal transport regulations.

But these consultations as victories are ambiguous—Animal Justice criticized Bill C-84 as insufficiently protective, and most of these federal laws do not address farmed species, who comprise the vast majority of human-controlled animals. Critics of the amended animal transport regulations say that the consultation was largely for optics because the new regulations still heavily favor industry interests—most farmed animals can still be legally transported for 28 to 36 hours without food, water, or rest. Animal activists are increasingly gaining influence, but the movement has not yet succeeded in effecting meaningful change for the many species of animals oppressed by humans.

Animal rights activists need not only care about or support animal-related causes—they can expansively work to support other activists, across movements, to increase collaboration and cross-movement engagement. Animal activists can engage more with intersectional vegan organizations like the Food Empowerment Project, which speaks out against many injustices in the food system, including environmental racism, hazardous farm work, and human slavery, such as occurs in the chocolate industry. Through greater acknowledgment of and support for other movements, animal activism may gain increased respect and support from other activists.

The animal rights movement can also increase its influence by treating its supporters in ways that ensure the longevity of their involvement. Both established and grassroots animal rights organizations can better support advocates by addressing racial and gender injustices in their own ranks. One study deserving of attention shows that racism and sexism are leading causes of burnout for activists in animal rights groups. Activists interviewed in the study—about a third of whom are people of color—identified racism, whether witnessed or experienced personally, as a major reason for disengaging from the cause. The study participants also described sexism from male advocates as a major driver of burnout. Corroborating these findings, the #MeToo movement exposed sexual harassment and male bullying allegations in prominent animal welfare organizations, including the Humane Society of the United States and Mercy for Animals. Lauren Ornelas, founder of The Food Empowerment Project, writes compellingly about leaving a 2015 Halloween animal rights protest in tears after arguing with a white animal activist over a racist comment. Animal activists can enhance their influence over public opinion for animals’ benefit by fully embracing diversity and inclusion.

Those who value democracy have an obligation to examine our collective discomfort with activists. The instinct to preserve established cognitive dissonances, such as those that drive meat consumption, may also subconsciously play a role in public discomfort with activists. We may denigrate those who act on their moral convictions, even if we agree with the underlying cause, for fear of how their behaviors make us look by association. Resentment for activists is deeply rooted in a fear of moral reproach for not doing as much as others. We may justify our own lack of action by projecting disapproval on activists’ specific behaviors, telling ourselves that protesters should not break laws, blockade streets, or stand in front of trucks—and that abstaining from such behaviors is morally superior. Those of us who consider ourselves ideologically progressive on causes like racial and gender equality, environmental justice, and animal rights can and should ask hard questions about what drives our actions, or lack thereof, and corresponding views on activists.

On the morning of her death, Regan Russell was holding vigil for animals going to their deaths; she was also protesting a law that criminalizes activism instead of cruelty against animals. Russell and other activists, by speaking out against the status quo, inadvertently trigger others’ fears of reproach for doing less. Collective public resentment against demonstrators may be inevitable but can be tempered by individual awareness of how important activists are, and how the processes with which they engage are crucial to fight against today’s persistent injustices. Despite our discomfort with activists, most of us oppose injustice and do not condone racism, sexism, homophobia, environmental destruction, or animal cruelty. Progress toward equality and justice for all requires the tireless work and dedication of activists willing to fight in all the ways that they can. The late John Lewis, who dedicated his life to civil rights and racial justice, once said, “Never, ever be afraid to make some noise and get in good trouble.” Even when we’re not the activists getting in trouble, it is incumbent upon all of us to support those who are.