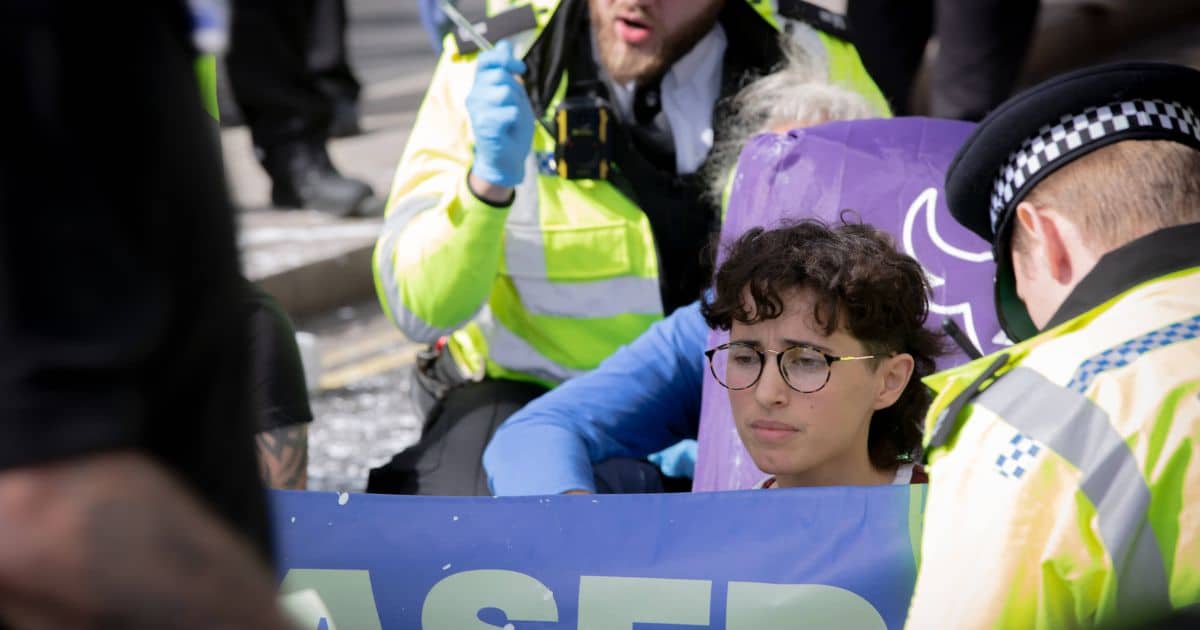 British supermarkets are beginning to feel the impacts of Animal Rebellion’s latest strike, as the group has now blockaded dairy distribution centers for the past week. Milk shelves are empty in stores in Portsmouth, Plymouth and London, with one Lidl store having notified customers of milk and cream shortages due to “haulage issues.”

Activists have been drilling holes in the wheels of trucks, climbing on top of milk silos and blockading entrances at three plants run by Muller and Freshways, as well as the U.K.’s biggest dairy distribution center in Buckinghamshire, owned by dairy production company Arla.

The group, which has paused its actions following the death of Queen Elizabeth II, has pledged to continue disrupting the country’s dairy supply until the government meets its demands — supporting farmers and fishing communities to transition away from animal farming and fishing and committing to rewild the freed-up land and ocean to restore wildlife and draw down carbon emissions.

Yet are the group’s demands feasible? Can the country’s farmers transition to a plant-based food economy and return overgrazed farmland to wild carbon-saving ecosystems?

The U.K.’s agricultural sector produces 10 percent of the country’s greenhouse gas emissions but accounts for 47 percent of its methane emissions — around 5 percent of total climate emissions in the country. Food sector emissions are caused primarily by farming ruminant livestock. 68 percent of all nitrous oxide emissions comes from farming, including synthetic fertilizer and animal manure. U.K. fisheries, meanwhile, emit an estimated 914 kilotons of carbon dioxide in a year–equivalent to the annual energy use of 110,000 homes — due to aging oil-powered vessels and destabilizing marine environments through overfishing and bottom trawling.

The National Farmers Union has proposed a strategy to make the country’s agricultural sector net-zero by 2040. Alongside tree-planting and the restoration of wetlands and peatlands to draw down carbon, the plan depends on feed additives and gene-editing to reduce emissions from livestock, anaerobic digestion of animal manure and bioenergy with carbon capture and storage.

Yet the feasibility and effectiveness of some of these measures — including anaerobic digestion and feed additives — is unclear. But most importantly, the advocacy group’s strategy does not include a critical recommendation endorsed by climate scientists — including the government’s own Climate Change Committee — to reduce meat and dairy consumption and, subsequently, the number of animals farmed in the U.K.

The Committee has called for a 20 percent reduction in meat and dairy consumption by 2030 to help tackle emissions. The National Food Strategy, written by government-appointed food tsar Henry Dimbleby, recommends a 30 percent reduction.

Other research suggests a move to an agroecological model of farming in the U.K. that involves halving consumption of animal products, which would free up land to grow plants for humans to eat. In such a scenario, the research estimates that 7 percent of land currently used for agriculture could be used “for purposes other than domestic production,” reducing greenhouse gas emissions (mainly from nitrogen) by around at least 38 percent, with the potential to offset 60 percent or more of remaining emissions if trees are allowed to regrow on spared land.

Animal Rebellion’s demands go further than these recommendations, but at the moment the government hasn’t even taken on board the moderate advice of its own scientific advisers. As a result it is now being sued by non-profit Feedback.

Government Support for a Plant-Based Transition

The moment seems ripe for a move away from animal farming.

Nearly a quarter of dairy farmers are thinking of quitting the industry due to rising costs. The pork sector has been in deep trouble for months, due to labor shortages, leaving farmers with no one to slaughter their pigs. Avian flu has been tearing through poultry farms in the UK, as elsewhere, resulting in the mass killings of thousands of chickens, turkeys and ducks to stop its spread — though already too late for many wild bird populations. The war in Ukraine has also pushed up the price of grain, fertilizer and fuel, making it more expensive for farmers to rear animals, while drought from an exceptionally dry summer has compounded the problem.

Meanwhile, the government has undermined its own efforts to make farming more nature-friendly, relaxing rules that set aside land for wildlife and allowing farmers to use these areas to feed animals.

Any suggestion that the UK can pivot away from animal farming to a plant-based food system is met by farming groups and the meat industry with the argument that 65 percent of British land is only good for grazing.

Yet the potential for increasing domestic plant production has historically been under-explored.

Currently, 70 percent of land in the UK is used for agriculture, with the majority taken up by grazing sheep and cows, and about the same amount used to grow feed for poultry and pigs as is used to grow vegetables, fruits and cereals.

Only 4 percent of crop-producing land is used for growing legumes — a proportion that must increase if the country wants to reduce reliance on animal-sourced proteins. Oxford University researchers are looking into how more legumes could be grown in the U.K., but there are barriers as research developments in arable production have historically been focused on high-yielding wheat and oil seeds for feeding animals.

According to research from environmental think tank Green Alliance, the government could use its own agricultural subsidies to draw down emissions from agriculture by a third, just by paying farmers for conservation efforts like rewilding land used for grazing.

The rate at which land in the U.K. could absorb carbon emission could more than double in some areas with high storage potential. “Rewetting” natural wetlands and protecting peatlands are strategies that also have huge potential to sequester carbon.

Rewilding has an added climate benefit — helping wildlife and human communities adapt to extreme weather events caused or made worse by climate change.

The U.K. ranks among the worst in the world for the destruction of nature and loss of biodiversity. Though the country once had extensive forest cover and robust populations of animals, many of these creatures are now absent, including wolves, or, like beavers, remain embattled even after being reintroduced.

Farmland expansion and intensification has been the driving force in destroying U.K. ecosystems, yet the agriculture industry is resistant to the idea that some landscapes could be better off without grazing animals, as well as to types of rewilding that involve reintroducing predators.

Livestock farmers, along with bird shooting estates, successfully lobbied for scrapping a planned reintroduction of white-tailed eagles to Norfolk in 2021, for example. A number of farmers characterize rewilding as a land grab, a sentiment echoed by right-wing media in the U.S.

Still, a growing number of farmers are embracing rewilding, with one ambitious scheme to create an extensive wildlife corridor set to receive financial support through government investment.

Ultimately, more than 100,000 acres of degraded land that currently support grazing animals could be rewilded while increasing job opportunities by 47 percent, according to a report by Rewilding Britain.

The government could at least partially meet the demands of Animal Rebellion then, both by increasing its support for rewilding plans and investing in research to grow a wider variety of plant-based proteins. It may seem far-fetched to imagine political leaders conceding animal rights activists have a point, but there are examples of direct action turning into proposed policy. In 2021, an environmental activist group blocked motorways to demand a national drive to insulate homes. This year — or at least since August — it’s a proposal the country’s Labour party is now promoting as its own.