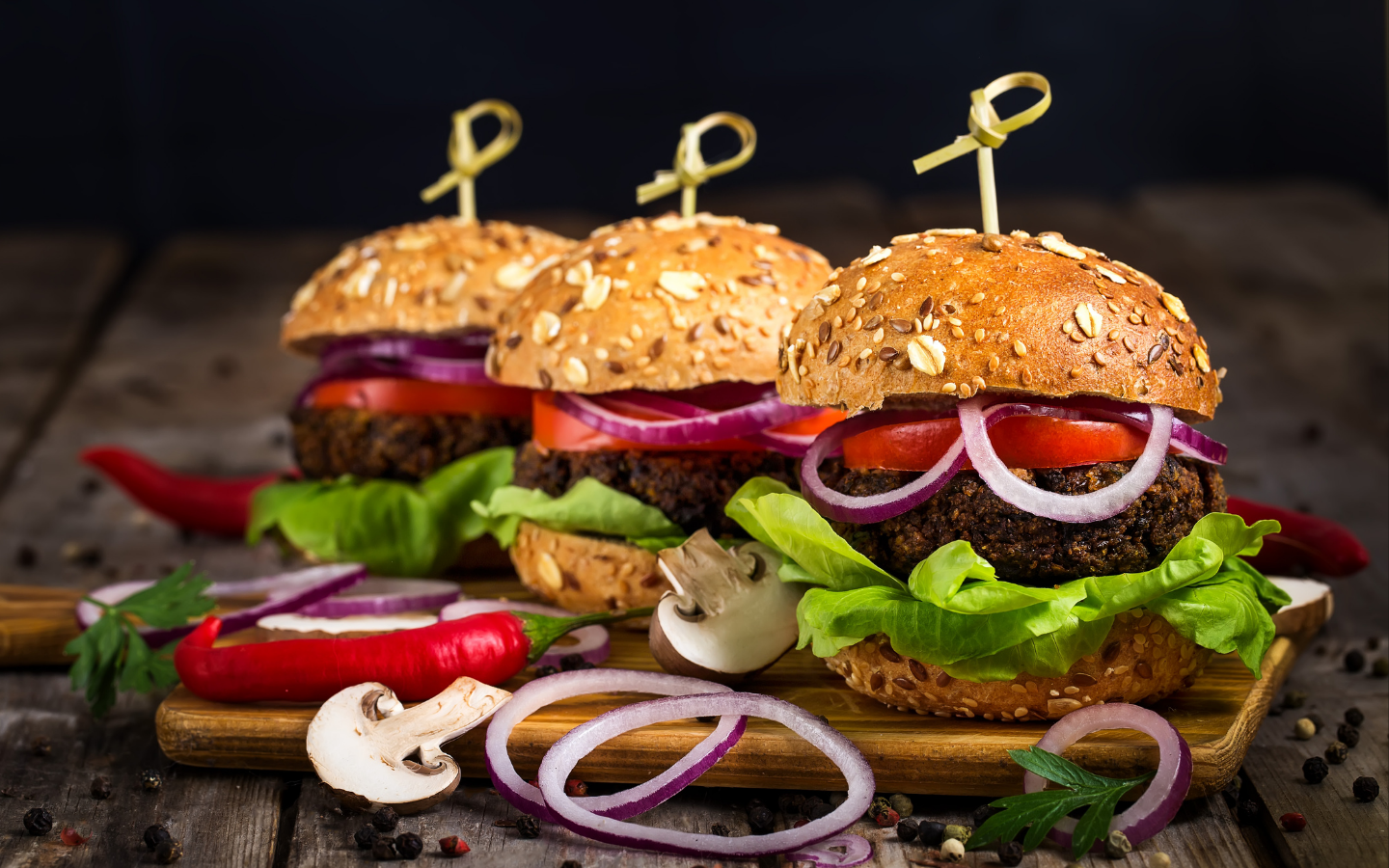 Plant-based meat is growing more popular by the day, and for good reason. Offering a healthier alternative to meat, while being vastly more sustainable and packing authentic flavors, aromas, and textures, plant-based meats are making it easier than ever to reduce conventional meat consumption, or even eliminate it altogether. But what, exactly, qualifies as plant-based meat? What differentiates these products from tofu or black bean burgers? And how good for the environment are they, really? Read on for answers to these, and other commonly-asked questions about plant-based meat.

What Is Plant-Based Meat?

Plant-based meat refers to products made from plant materials that are designed to mimic meat in every way, from taste, texture, smell, and appearance. Plant-based meats can come in the form of burgers, sausages, ground meat, crumbles, nuggets, even faux-seafood like shrimp and fish, and use one, or a combination, of alternative protein ingredients.

Whole muscle meat products are designed to resemble steak, chicken breast, or any other type of animal muscle. Many companies are striving towards developing an entirely plant-based steak; NovaMeat, a Spanish start-up, is developing a version made of pea and rice protein. A 3D-printed structure will give the product an authentic muscle feel that is a defining characteristic of real steak.

Restructured meat products are those that mimic products like ground beef, meatballs, sausages, and nuggets. Beyond Meat Burgers and Impossible Burgers, both fall under the restructured meat category.

What Is Plant-Based Meat Made From?

Plant-based meat can be made from a variety of ingredients, depending on the type of meat being produced and the company creating it. Common ingredients include grains and legumes, which are utilized for their proteins, fibers, and starches, which can be converted into isolates, flours, and concentrates. Through a process known as extrusion, whereby ingredients are put through hydration, shearing, and cooking, these ingredients are made to more closely mimic meat characteristics, while eliminating unwanted aromas, flavors or textures. By way of example, the Beyond Meat burger features pea protein isolate as its star ingredient.

Aside from protein components in grains and legumes, fibers and starches are also used in extruded plant-based meats to help make products more realistic. Whole muscle meat products can achieve a more realistic fibrous composition thanks to these ingredients, which can also be used to create realistic sausage casings.

Fermentation is another process commonly used in some plant-based meats. The Impossible Burger, for example, created a plant-based heme molecule that allows their burgers to bleed just like an animal-based burger would. Impossible’s heme is created through fermenting yeast that has been engineered to produce the molecule.

The U.S. Department of Health & Human Services reports that consuming excessive amounts of red meat can be linked to high cholesterol, cancers, cardiovascular disease, obesity, type-2 diabetes, and other chronic, potentially deadly diseases. In 2015, the World Health Organization classified processed meats, such as bacon, sausages, and beef jerky as being carcinogenic, and red meat, including beef, pork, and lamb as “probably carcinogenic.” These findings sound the alarm that American diets are in need of a revamp.

Plant-based meats can be healthier since they contain no cholesterol whatsoever while containing high amounts of fiber – a nutrient sorely missing from many meat-centric diets, since conventional meat is entirely lacking in fiber. Plant-based meat companies are also able to amplify their products’ nutrient profiles by fortifying them with various vitamins and minerals, similar to how conventional dairy is fortified with nutrients like vitamin D. In addition to this, plant-based meats are not filled with antibiotics and hormones that are fed to animals in factory farms. This is particularly important since antibiotic resistance is a serious, and growing, problem around the world.

Is Plant-Based Meat Better For The Environment?

Plant-based meat is vastly more sustainable than conventional meat, largely because of how unsustainable animal agriculture is. Animal agriculture uses 77 percent of the total available agricultural land on the planet while providing less than 20 percent of the food supply. Beef production, requiring vast ranges of pastureland, is one of the most important factors in global deforestation, which in turn is a major driver of climate change.

Plant-based meat is much less damaging for the climate in another critical way since emissions of greenhouse gasses are reduced by up to 90 percent when compared with conventional meat. Water pollution and nutrient pollution are also nearly entirely eliminated in many cases thanks to plant-based meat.

While taste is subjective to a large degree, many people agree that plant-based meat tastes like beef – particularly the Beyond and Impossible burgers. The popularity of these burgers attests to the impressive flavor profiles these companies have managed to achieve. Burger King wouldn’t have made the Impossible Whopper if it didn’t closely mimic the real thing!

Is Plant-Based Meat A Healthy Substitute For Meat?

It’s generally agreed that cutting down on red meat consumption is advisable for people in the United States, who consumed an average of 2.4 burgers every day in 2018. Many studies have shown that a high intake of red and processed meats is associated with increased mortality risk.

Opting for plant-based meat alternatives can help decrease risks associated with consuming too much meat. However, as with any diet, variety is the spice of life – eating too much of anything can have negative effects. This is why, for optimal health, it’s recommended to eat plenty of plant-based foods, particularly those which are considered “whole foods” – meaning unrefined, minimally-processed foods. These include leafy green vegetables, brown rice, whole-grain bread, and fruits.

The fake meat sector is booming, with projections for the global market expected to be worth over $7 billion by 2025.  In today’s world, consumer demand is skyrocketing. 2019 was a watershed year, seeing plant-based sales reach $5 billion, with the plant-based meat category accounting for over 208 million units sold, and 18 percent growth that year alone.

Two companies in particular have helped show the world that plant-based meat can be delicious, and remarkably meat-like. Restaurant chains including Carl’s Jr. incorporated the Beyond Burger into its menu, while Burger King used the Impossible burger for its new Whopper patty.

In short, things are looking very bright for the plant-based meat sector.

Who Are The Big Players in the Plant-Based Food Space?

The big players in the plant-based meat industry are not all new companies. In fact, many of them have been around for decades – and include some of the biggest animal protein companies in the world, such as Maple Leaf Foods, known for products like hot dogs and other processed conventional meats. Yet the meat industry’s interest in plant-based meat signals a growing trend of consumer interest in alternatives.

Below is a list of the top ten big players in the plant-based meat industry, along with their parent companies:

Are There Other Ways To Reduce Meat Consumption?

There are plenty of ways to reduce meat consumption beyond opting for plant-based meat. When having a meal that includes meat, bulk up the dish by adding more grains or vegetables, in order to use less meat. Conversely, try using smaller amounts of meat in every meal, opting for recipes that use meat as more of a flavoring than a main character. Buying meat on the bone can stretch the food longer, since bones can be used to make soup stocks. When snacking between meals, choose minimally-processed whole foods like vegetables, fruits and whole grains will make you feel more full for longer, rather than eating processed snacks – regardless of whether those snacks are plant-based or not.

Consumer demand and positive reception over the last few years have illustrated that plant-based meats are not only here to stay, but they could help reinvent the food industry writ large. Plant-based meats represent the kind of change the world needs at a time when the climate catastrophe is wreaking havoc, and many people are suffering negative health effects from consuming too much conventional meat. So the next time you’re perusing the grocery store shelves, give plant-based meat a go and see for yourself how friendly they are to the planet and your palette.