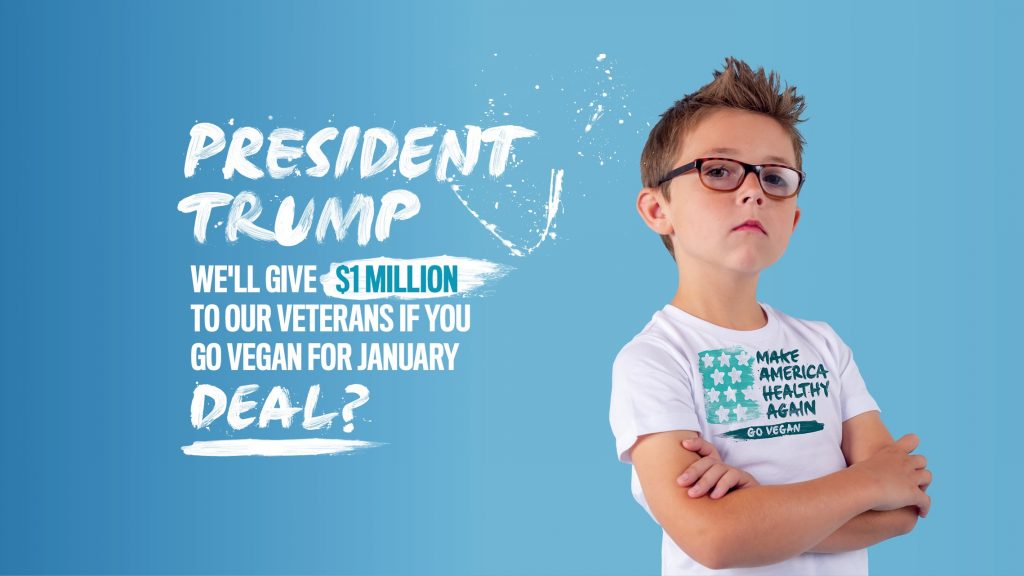 Calf Life: A Story of Opioids, Export, and Abuse

With the money already waiting in an escrow account, Million Dollar Vegan, a nonprofit organization, has asked President Trump to help “Make America Healthy Again” by going vegan for the month of January. For their part of the deal, the organization will donate one million dollars to veterans organizations picked by POTUS. Led by Evan, President of Animal Hero Kids and ambassador to Million Dollar Vegan, the group says it is ready to sign the check within one hour as soon as the President signals his agreement on Twitter.

“We really want President Trump to accept our offer,” said Evan, the 9-year old lead for the campaign (whose last name is withheld because of his age). “We want to write that check! But most of all we want to help Make America Healthy Again, and that is why we have some awesome resources available for anyone who would like to go vegan for January and see what it could do for them. It’s really not that hard and it can do so much good. Everyone should try it.”

This is the second $1 million offer made by the group this year. In February 2019, Million Dollar Vegan offered the money to Pope Francis if he would go vegan for Lent. That campaign resulted in more than 1,000 media articles around the world, a meeting with senior priest Father Paweł Ptasznik at the Vatican, and the Pope’s blessing, the pontiff did not confirm that he would go vegan for Lent. That money is now being offered to President Trump, with the aim of inspiring people across America and beyond to rethink their food choices and improve their health.

The offer made to President Trump has the backing of medical and nutritional experts, including Dr. Dean Ornish, Dr. Caldwell Esselstyn, Dr. Michael Klaper, Dr. Angie Sadeghi, Dr. T. Colin Campbell, Dr. Joel Kahn, and Dr. Neal Barnard. They, like many other medical professionals,  advocate a plant-based diet to prevent, halt and reverse some of the Western world’s biggest health risks, including heart disease, type 2 diabetes, and obesity.

In a full-page ad in the New York Times on Sunday, December 1st, the campaign elaborated on the emergency and need to change how the country gets its nutrition. “Cardiovascular disease and stroke already create more than $329 billion in healthcare costs and lost productivity, while the American Diabetes Association has estimated the total cost to the economy of diagnosed diabetes exceeded $327 billion in 2017 alone.”

Nothing to Lose, Everything to Gain

The extent of the epidemic and the pathology of eating patterns in the Western diet are undeniably costing both individuals and national economies. The industrial factory farming model of food production has also created a system of perpetual suffering for billions of animals, a system which is mostly operated out of the public’s sight.

And while President Trump may not be interested in farmed animal suffering, or the massive climate impact of animal agriculture, we’re still left with the huge negative health impacts of animal products, and it is Trump’s own base who are some of the primary demographics at risk from unhealthy food.

And, at the end of the day, even if President Trump does not bite the million-dollar vegan bait here, the media attention created by the campaign will get the idea of trying out this vegan thing in front of many people who otherwise might never have thought of it.

You can read more about the campaign on its website, which also offers practical and informative guides – a Vegan Starter Kit, a Health & Nutrition Guide, plus some healthy and delicious plant-based recipes. Those wishing to go vegan for January can access all these for free, and receive daily newsletters throughout January to help them get started.