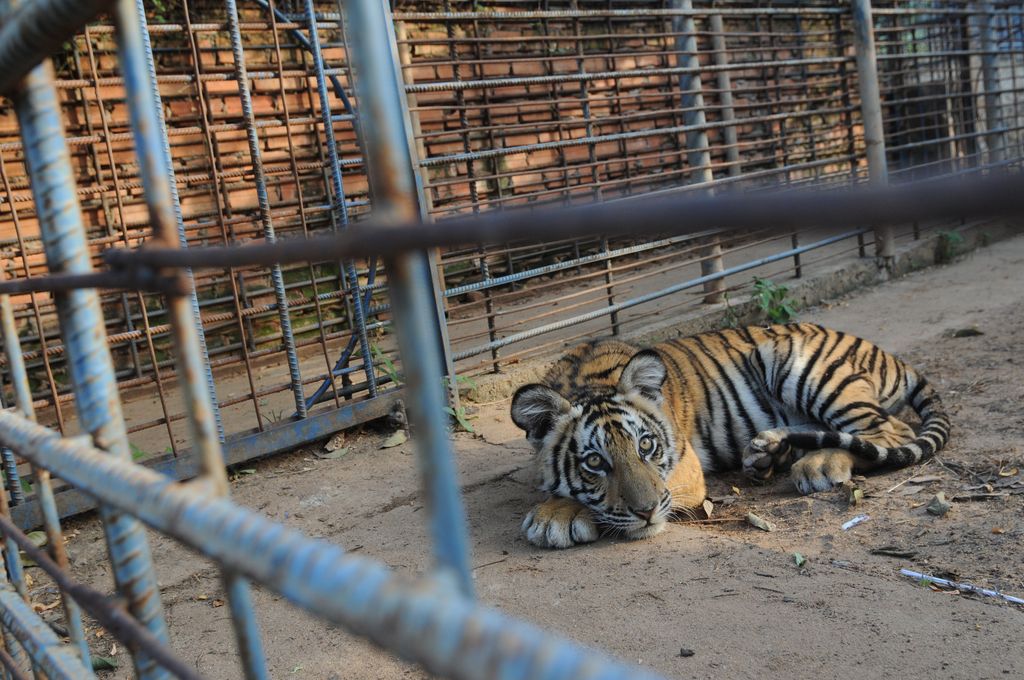 Even though zoos are non-profits, they still focus on the bottom line. The ethical implications of wildlife conservation efforts have gone unexamined.

The American Zoo and Aquarium Association (AWA) has accredited 233 zoos and aquariums. Including the 233, the U.S. Department of Agriculture has given licenses to about 2,400 “animal exhibitors.” Animal exhibitors use their licenses to operate roadside zoos and petting zoos, which are both notorious for animal abuse.

Zoos claim to save wild animals, but wild animals in zoos are reduced to commodities and given inadequate habitats. Many animals in zoos are “charismatic megafauna,” such as lions and elephants, because they attract visitors. Charismatic megafauna are wild animals that interest humans, such as giraffes and tigers. And on the whole, at an institutional level, zoos paint overly simplistic views of biodiversity and ecosystems by only promoting exotic animals that are well-known, and are often at the apex of their particular food chain.

Zoos engage in animal exploitation by profiting from the visitor attention and conservation grants they garner while providing the captive animals with a poor quality of life. Since 1995, zoos have turned to antidepressants, tranquilizers, and antipsychotic drugs to alleviate depression and aggression among zoo animals across America.

Only baby chimpanzees are taken from the wild. And when captured, baby chimps experience unforgettable trauma since their mothers are shot to death in front of them. Many infant chimps are wounded while captured and die before they reach market.

Breeding captive animals is the only alternative to capturing wild animals. Yet, successful captive breeding programs produce what zoos deem “surplus animals.” A surplus animal has “made its genetic contribution to a managed population and is not essential for future scientific studies or to maintain social-group stability or traditions.” When selling them to other zoos or private collectors, zoos don’t consider the trauma of separating the animals from their families and communities. The existence of surplus zoo animals perpetuates canned hunting ranches, which facilitate wealthy clients shooting drugged animals and having them stuffed as trophies.

Serious conservation efforts begin with humans’ commitment to stop encroaching on and destroying wild animals’ habitats because we are pushing many species to extinction. According to the World Wildlife Fund’s 2018 Living Planet Report, between 1970 and 2014, humanity has been responsible for wiping out 60 percent of the global wildlife population, which encompasses mammals, birds, fish, and reptiles. This report corroborates that the planet is undergoing its sixth mass extinction, which scientists warn will have grave consequences for humans.

Why is it admirable to “save” animals whose natural habitats are disappearing due to humans? Because in a sense, we are playing God by keeping wild animals captive and forcing them to reproduce, in the hope that our children will be able to see them alive, in-person. There is an irony that in conservationists’ pursuit to save a species, individual animals suffer in captivity in zoos, and are forced to use their reproductive systems to bring new wild animals into existence to add to zoos’ populations. This debate can be framed as the conservation versus rights approach.

Even if zoos have become experts at keeping captive animals alive, and forcing them to reproduce, the ethics of keeping wild animals is problematic. Granted, zoos, on occasion, have successfully reintroduced animal species into the wild, but this does not justify the grounds of their captivity. Zoos’ commitment to wildlife conservation is called into question since many are guilty of profiting from the sale of extra animals to third parties instead of returning surplus animals to their environment.

A 2008 study from researchers at the University of Exeter in the U.K. found that most captive-bred carnivores released into the wild do not survive the transition, which raises questions about the efficacy of captive-based conservation efforts for carnivores, such as tigers, cheetahs, and brown bears. The study reviewed 45 carnivore reintroductions worldwide and found that only 33 percent survived. Their low survival rates have been attributed to their lacking fear toward humans and crucial hunting skills.

Visiting zoos doesn’t send the right message to children about wildlife conservation and animal ethics. Most children visit zoos for entertainment, while some focus on education. Americans can learn more about wild animals from National Geographic than zoos, which often entertain children with playgrounds and videos anyway. Zoos teach children to value animals as property, rather than individuals that deserve compassion and fundamental rights, such as the right to bodily integrity and dignity. And the right to bodily integrity and dignity are both violated through zoos’ implementation of forced breeding programs and selling “surplus” animals to canned hunts.

Zoos exploit captive animals by causing them more harm than good. And their wildlife conservation efforts are misguided at best, and pernicious at worst. While zoos claim to champion conservation efforts, they sell surplus animals, such as male lions, to roadside zoos or private collectors. Concentrating on anti-poaching efforts would greatly help wild animals facing extinction. Another solution is international policy efforts to conscientiously end the encroachment and appropriation of these animals’ habitats in the wild. These solutions can meet the conservation needs that zoos are trying to meet, without zoos.

Boycotting zoos, and other exhibits that display captive animals is a powerful way to stand up to a system more concerned with profits than the animals under their care. If a species is unfortunately unable to survive in the wild, either because of poaching or the destruction of habitats, are we really giving individuals of the species a fair chance at survival in captivity? Even if basic needs are met, zoos force wild animals to endure the psychological trauma of unnatural and unstimulating confinement. In an environment completely determined by humans, e.g., community members, food, habitat, it’s no wonder zoo animals will never have a chance to thrive.