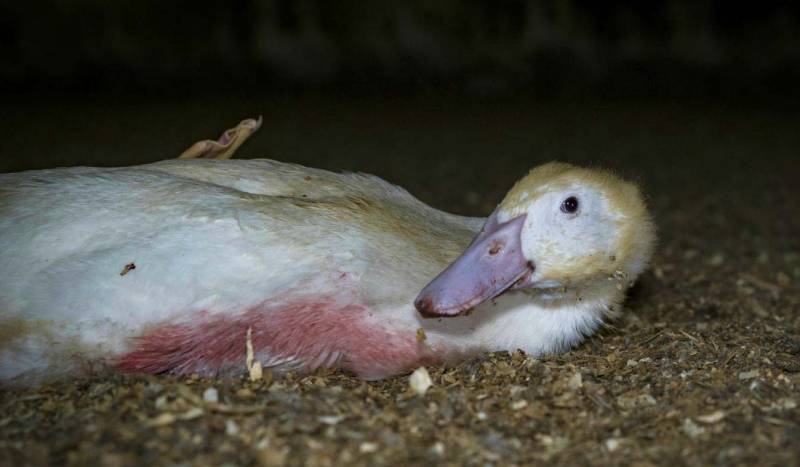 Millions of ducks are raised on industrialized farms for their meat and eggs every year. Reichardt Duck Farm, made infamous by DxE’s latest Right to Rescue operation, slaughters around one million ducks alone, so it’s not hard to imagine what happens on duck farms around the world.

Farmers enter the duck business to turn a profit as quickly as possible by selling “high-ticket” “items” like duck eggs and meat.

Foie gras, for example, is considered a delicacy and comes with a high price tag for consumers, but is duck farming really that profitable?

Is financial gain from the loss of countless animals’ lives worth the physical and psychological effects of workers, the clogging of arteries in consumers, and the environmental concerns associated with factory farming?

Too many farmers believe so, and whenever profit is the main motivator, animal cruelty is never far behind.

Duck farms exist to raise and slaughter birds for their meat and eggs.

These birds are docile animals and are considered “easy” to raise, so they are the perfect animals to exploit in the minds of producers.

Their products can be sold for more than those of a chicken, so (naturally) factory farms exist to crank out as many ducks as possible to turn the highest profit with little-to-no regard for the animals’ safety or wellbeing.

The duck meat industry in Australia is worth around $100 million and increases about 5% each year. That number might seem high, but Australia is not even a top producer like Asia, Africa, or the Americas.

Much of Australia’s ducks are sent to Asia, where around 100,000 ducks are shipped each week.

Two Chinese companies recently bought one of Britain’s largest duck farms for $183 million, contributing to the billions of ducks bred and sold every year in China alone.

The big money comes from specialty ducks like those force-fed into liver failure, also marketed as “foie gras.”
One pound of foie gras can cost $50–$90 to purchase from the supplier, not taking into consideration the preparation costs at the restaurant.

Though duck eggs are not as popular as those from chickens, duck farmers can get around $6–$12 per dozen, which is more than double the cost of chicken eggs.

Ducks are the second most slaughtered land animal, right behind chickens, and billions are slaughtered every year around the world.

Consumers often use duck eggs over chicken eggs because they last longer, are larger, and have higher concentrations of nutrients like Omega-3 fatty acids.

Duck meat is considered “versatile,” so it appeals to connoisseurs and common folk alike and offers a few more grams of protein than chicken.

Just because it is popular and profitable does not mean it is perfect. Cruelty runs rampant within supply chains around the globe, and ducks are forced to pay the consequences.

Why Duck Farming is Unfair

Though duck farming might be profitable for the producers, it is far from glamorous for the birds kept inside, as well as the workers.

Conditions are dark, dirty, and cramped which is the complete opposite of how ducks live in the wild. Birds are kept from displaying their natural behaviors and suffer a ghastly death.

Think of any ducks you’ve seen at the park, near a pond, or around the lake. They are normally swimming, flying, or rummaging around in the grass.

Water is a key component of a happy, healthy duck and factory farms remove that “luxury” from them.

Since they spend most of their life on or around water in the wild, their bodies are not made for standing on hard surfaces or grates for extended periods of time. Inside these sheds, birds are forced to stand on uncomfortable ground for weeks until they are sent to slaughter.

Ducks have hollow bones, so they break and fracture easily in these conditions.

Water helps ducks clean themselves, so infections of the eyes, skin, and lungs are common due to the buildup of excrement.


When you force hundreds of birds, who would naturally have the entire world to explore, into sheds and strip them of any normalcy, psychological and physical effects are imminent.

The bedding used on duck farms normally does not get changed for the entire breeding process, so there is a buildup of waste which exudes the stench of ammonia. This putrid odor burns the lungs of birds forced to reside in it as well as the workers who enter the barns.

Without access to clean water, ducks cannot routinely clean themselves, meaning that infections and diseases are likely to occur.

Health risks increase as ducks begin to succumb to their illnesses as well since they decay within the same confines as the rest of the flock and can easily spread diseases.

Ducks also need sunlight, exercise, and places to explore, but they are prevented from enjoying even the smallest of normal behaviors.

Since birds are unable to properly bathe, ammonia burns are common from the buildup of feces and urine caked onto their skin. Respiratory infections are not uncommon from the ammonia in the air as well.

Sick birds are often trampled due to lack of space by others.

Since workers are expected to feed, move, and slaughter as many ducks as possible, the opportunity for abuse is high.

Ducklings hatched in the hatchery are often thrown, grabbed aggressively, and some are even tossed into a grinder if they are “unfit” for consumption. Ducklings are discarded due to disease or deformity, or because they are males that cannot produce eggs.

As you can imagine, when you are trying to do your job of transporting hundreds of ducks in a short period of time, speed and efficiency often trump compassion and tenderness.

Physical and Psychological Effects on Workers


Workers on factory farms are exposed to some of the most horrific sights, smells, and expectations of anyone in the workforce.

Someone can detach themselves from their compassionate instincts for only so long before they crack.

It is not in a human’s nature to want animals to suffer, especially those who are gentle, innocent, and being taken advantage of.

Many factory farm workers are underprivileged citizens or undocumented immigrants. This demographic is less likely to complain about low wages, poor working conditions, or any animal abuse that happens within the barns.

Workers are exposed to hazardous conditions, potentially without knowledge of them. Ammonia clouds the air, making it difficult to breathe without burning your lungs. This can also cause eye issues.

Since many workers are from other countries, the language barrier plays a role in why none of them speak up about the atrocities happening every day at their workplace.


Foie gras is an expensive dish consisting of fattened duck liver. In order to rapidly engorge the liver, ducks and geese are force-fed via long tubes shoved down their throats at least twice per day.

The rapid growth and stress on these birds’ livers, as well as their joints and other organs, leads to difficulty breathing, inability to regulate body temperature, and extreme exhaustion. These are all signs of liver disease and failure.

These engorged birds are kept in cramped conditions, often even small cages, until they are transported to slaughter.

Outside of foie gras, ducks are selectively bred to produce the most meat in the shortest amount of time. Since these birds are growing at alarming rates in such a short time period, their organs have trouble keeping up.

Heart attacks, respiratory issues, and broken legs occur as a result of this unsustainable growth.

Due to the high volume of ducks packed inside one small barn, anxious birds tend to peck at each other due to boredom, territorial tendencies, and/or sheer lack of space.

To prevent ducks from pecking each other, farms often require “debeaking,” which is the searing, grinding, or cutting of a bird’s beak.

Ducks have nerve endings all the way to the tip of their beak, so they feel every bit of the hot blade as it removes up to half of their bill. The thought process of removing a portion of a duck’s bill so they are unable to harm each other before you slaughter them seems a bit ironic, don’t you agree?

Life of a Breeder Duck

Ducks require their own personal space to make their nests and do not thrive in crowded areas.

On factory farms, hundreds to thousands of ducks are stuffed into one artificially lit barn. The normal egg production process requires around 14–16 hours of daylight, yet ducks inside these structures never see the light of day. They never get the opportunity to splash in fresh water or rummage around in the grass like their instincts are begging to do.

Egg-laying ducks are stripped of their instinctual motherly practices, and their eggs are taken from them as soon as they are laid. Baby chicks are normally hatched in a “hatchery” away from their mothers.

Sick ducklings are discarded like garbage, while the healthy ones that can be used for egg-laying or meat continue their dreadful journey.

The natural lifespan of ducks in the wild is around 10–15 years, but ducks on factory farms are slaughtered for meat starting at just six to seven weeks old.

Ducklings deemed “unhealthy” (aka “unprofitable”) are sent to the macerator where they are ground up alive.

This process is still considered standard practice, even though it is incredibly barbaric and despicable.

The slaughtering process is chaotic, traumatic, and barbaric. Birds often do not die right away, so you can only imagine how horrifying that experience is.

As you will see in the video below, birds often live long after their necks are cut. Many are sent to be de-feathered while still conscious.

What you are about to see is graphic.

Duck farming might be profitable for the companies in charge, but it is cruel and unfair to the animals residing inside these farms.

Ducks are stripped of even the smallest decencies and forced to live in stressful conditions until they are ultimately slaughtered.

Nothing humane happens inside factory farms, and duck farms are no exception. Confusion, anxiety, and fear are all these ducks have ever known. They never asked for this life, but humans forced them into it.

What can you do to stop this cruelty? Stop supporting duck farms by removing their meat and eggs from your diet. This cruelty is not specific to just ducks, though. All factory farms are unethical.

The best way to help animals within these industrialized farms is by educating yourself and taking action – you can start by signing this petition.

As Dairy Industry Evolves, Farmers and Their Animals Continue to Suffer