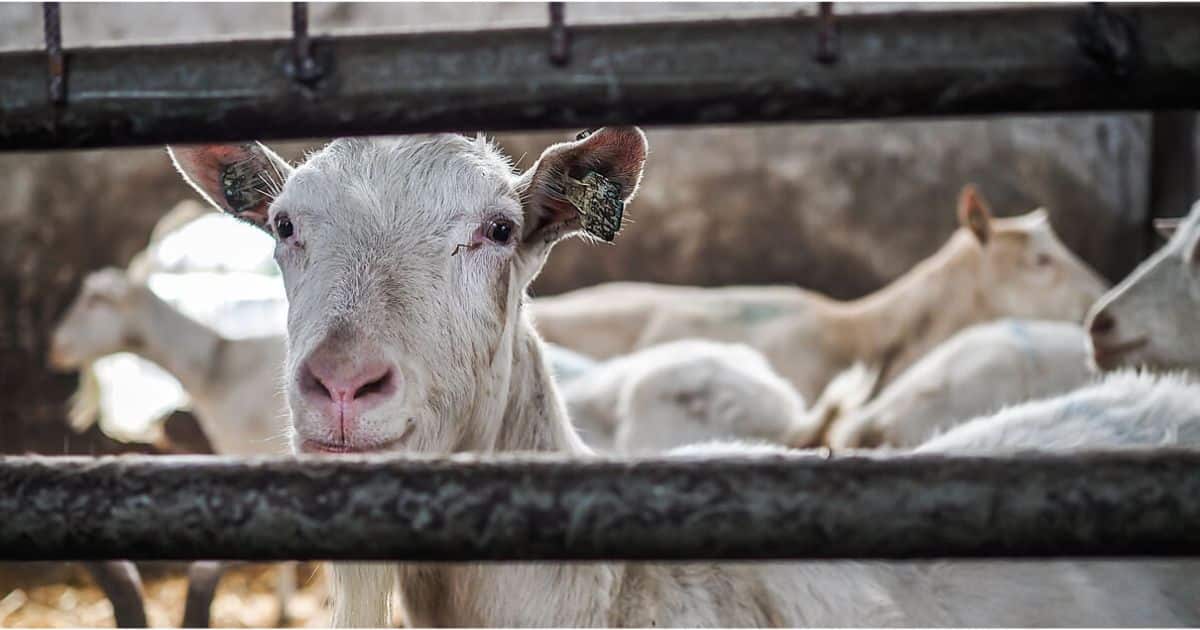 Goats have long been regarded as sociable animals by the humans who keep them. In fact, these animals are often described as curious, reactive and even imaginative.

In the United States, where cow milk is the norm, the image of goats as friendly individuals living in spacious farms lends itself to the myth that drinking milk from goats is healthier and more ethical than drinking milk from cows.

Yet a recent investigation into an award-winning goat milk producer in the United Kingdom, with operations in Asia and the United States, revealed that supermarket purchases of goat milk and the products made from it — such as cheese, butter and yogurt — do not deserve this ethical halo. Despite being surrounded by luscious green fields in the producer’s marketing materials, the Animal Justice Project found that these goats spend their entire lives inside bare and filthy sheds that do not allow access to outdoor grazing.

Yes, goat milk is dairy. Dairy products are made mostly of milk that comes from mother animals such as goats, cows, buffalo, donkeys and other livestock.

U.S. dairy goats can be found all over the U.S. but are concentrated in the Midwest, including Wisconsin and Iowa, Texas and California. Worldwide, the U.S. is not a significant producer of goat milk. Goat dairy milk production tends to be much higher in Asia, the European Union, Africa and South America.

There are multiple agricultural uses for goats. Goat meat is popular in India and Latin America, while Europeans highly value goat cheese and milk. In China, cashmere fiber is a hugely valuable product for export.

Yes, goat milk does contain lactose, just as cow milk does. Healthline reports that the amount of lactose in goat milk tends to be slightly lower than the amount found in cow milk.

Lactose is a sugar that most people in the world cannot digest after they’ve reached the age of five. Food researcher Marion Nestle has reported that during drafting for the 2000 national dietary guidelines, the Congressional Black Caucus argued that the proposed guidelines demonstrated “a consistent racial bias in recommending dairy products as part of a balanced diet.” The Caucus worked with the Physicians Committee for Responsible Medicine to demand that “dairy products be listed as optional rather than as superior sources of calcium.”

Humans are omnivores, so they are capable of digesting goat milk. While most dairy goat milk in the U.S. is used for making cheese, it’s also become more common to find goat’s milk in typical supermarkets in a fresh, pasteurized form. The goat milk industry is worth more than $90 million in sales in the United States per year, and the industry is growing.

Why Shouldn’t You Drink Goat Milk?

One reason for not drinking goat milk is to protect against harming animals through factory farming. Many of the same conditions that threaten cows in the dairy industry also apply to goats.

Susana Romatz, a vegan cheese maker, used to work on a free-range goat farm that touted its practices as “humane.” Romatz soon learned that this marketing obscures questionable practices, including the disbudding of baby goats, known as kids, without anesthesia. This practice is common but highly painful for the goats. Romatz was also concerned by the separation of mother and baby goats, who continued to call to each other from separate pens.

Dairy goat farming can also cause high rates of lameness in goats, failing to provide timely euthanasia and slaughter of excess production of buck kids — that is, male goats who are killed after they are born because they are deemed not useful for goat milk operations. These male goats could be turned into goat meat in areas where populations eat goat meat, but dairy goat meat is not always marketable to those populations.

There are several factors to consider when researching the benefits of consuming goat milk and how it compares with cow milk. The Pennsylvania State University extension website states that “scientific evidence does not support most health claims” made about goat milk being healthier than cow milk.

Saanen goats are a goat breed of choice in the industry because their bodies have been selectively bred to make the most milk, generating about 1.5 to 2 gallons of milk per day. Saanen goats are comparable to the black-and-white Holstein cows who are preferred in the cow milk industry for this reason. Just as with cows who are used for their milk, the lactation period — that is, the period of milk production — for a dairy goat is roughly 305 days per year.

The image of a free-living dairy goat smiling at the camera from atop a boulder on grass acreage is more a fantasy than reality. Being able to purchase a log of chèvre or other goat milk products from the chilled section of a grocery store unfortunately means that there is a system of mass food production in place that is probably hurting people, animals, and the environment. The efficiencies gained from making goat milk products affordable to the ordinary American palate have externalized costs.

Goat Milk Is a Part of the Dairy Industry in the U.S.

In the public imagination goat milk might evoke pastoral, green fields where goats can graze on brush and frolic, but a 2019 video depicting a standard goat milking parlor in the U.S. shows a different story. In it, about 30 goats are milked at once along two aisles with their heads locked into metal crates. A sparsely filled feeding trough sits on the ground for them to bend their heads toward to eat food rationed to maximize their milk outputs.

About one-fifth (19 percent) of farmed goats in the United States are used primarily for milk production, according to a USDA study published in 2019 that covered operations with more than five adult goats, reflecting at least 70 percent of U.S. goat farms. Most goats are primarily raised for their meat (62 percent), and the remainder are raised for their fiber, kept as pets or companions or used for other purposes including brush control.

Goat Milk Is Not Better for the Environment

Goats are ruminant animals, which means that they digest their food in a way that generates methane. When they are farmed intensively their burps release large amounts of this potent greenhouse gas into the atmosphere. Cows and sheep are also ruminant animals whose digestive systems produce byproducts that contribute to climate change.

Another source of toxic levels of methane from livestock is the manure that gathers in large quantities at concentrated animal feeding operations.

In addition to being a significant source of greenhouse gas emissions, livestock farming — which includes goats — accounts for most agricultural land use, and contributes to land degradation, deforestation and loss of biodiversity.

Goat Milk Is Not Good for Your Health

Living within a kilometer of a goat farm increases the likelihood of getting infected with an illness, according to news reports citing European experts in human-animal disease risk. While for some people this may mean no symptoms, for others this looks like “fever, chills, fatigue and muscle pain.”  A scientist told The Guardian in 2021 that people who live near goat farms “have a 20 percent to 55 percent higher risk of developing pneumonia.”

About a decade prior to this finding, an outbreak of a different zoonotic respiratory disease killed 95 humans and gave dozens more complications like heart failure in an intensive goat farming region in the southern Netherlands. About 50,000 people were infected with Q fever in this outbreak.

In the region where this intense goat farming is concentrated in the Netherlands, herd sizes grew from 313 goats per farm in 2000 to 1,177 goats per farm in 2020. The density of animals at these farms may help explain the rise in infectious diseases among people, though this link has not been established. Another potential explanation for the rise in pneumonia near intensive goat farms may be the presence of particulate matter. Poultry farms also have similar pneumonia risks due to the presence of dust.

Sentient Media’s Take Action hub offers multiple ways to learn more about alternatives to dairy that you can buy and support. One resource is Switch4Good, a web resource aimed at helping people learn how to go dairy-free. Farmers looking for support to make an income other than through dairy farming can check out Miyoko’s Dairy Farm Transition program.