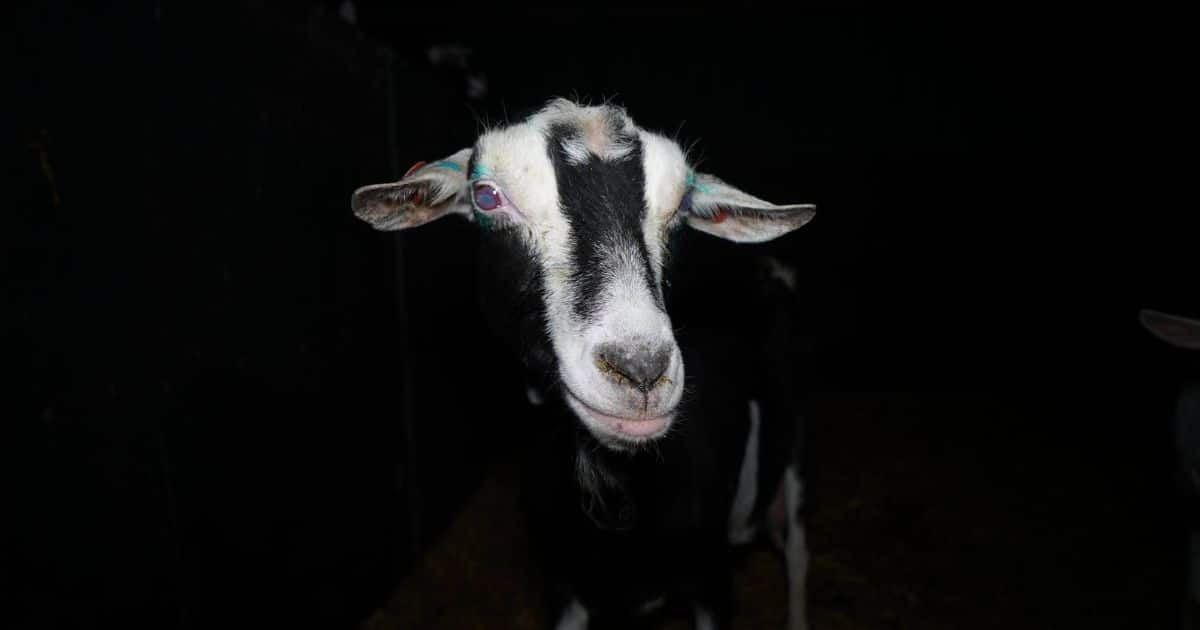 A new undercover investigation by nonprofit campaign group Animal Justice Project (AJP) has revealed the “violent killing” of baby goats at Pasture House Farm in North Yorkshire, England. Secret footage captured inside the intensive dairy — which holds more than 2,000 goats and churns out over a million liters of milk each year — also appears to show goats being slapped, shoved, grabbed and shouted at.

Warning: This story contains images and video that may be disturbing

The farm’s owner, Phil Ormerod, who is also the director of the Milking Goat Association, did not respond to our request for comment. However, the BBC reports that he “strongly denied” claims that his animals were mistreated.

Pasture House Farm supplies award-winning dairy brand Delamere Dairy, which sells goat milk, butter, cheese and yogurt to major supermarkets including Tesco, Asda, Sainsbury’s, and Morrisons. Delamere dairy farms in the U.K. reportedly account for around one-third of the country’s goat milk production. According to its website, the company also operates in the U.S., Australia, China, Malaysia and Thailand.

Delamere Dairy said in a statement: “From the evidence presented to us, we do not believe there have been any breaches in animal welfare or legalities at the farm in question, which is also the view from a number of independent sources.” It added that Pasture House Farm “has recently passed its Red Tractor independent Goat Farm Assurance, as well as passing all its unannounced independent veterinary inspections”.

In addition, a spokesperson for Delamere Dairy said in an email that what appears to be rough handling and violence toward animals in the footage is actually a worker “tending to the health and welfare of the kids.” The worker pushing the young goats away while she tries to carry out her tasks “is no different to someone pushing away their pet dog that was getting in the way and being bothersome,” the spokesperson said.

Goat dairy is a popular choice among people who, for whatever reason, don’t consume cow’s milk. But AJP’s investigation shows that dairy goats face almost exactly the same plight as cows.

In free-living populations, goat kids have been known to stay with their mothers for as long as eleven to twelve months. But at Pasture House Farm, secret cameras filmed mother goats being taken away from their babies just hours after giving birth, a practice common to all dairy farms. AJP says that following separation, the goats showed signs of distress such as searching for their kids and crying out.

Females are usually raised for use in the milking herd. Estimates suggest that 25 to 50 percent of male goat kids born into the industry are culled.

The investigation is believed to be the first in the U.K. to film the killing of surplus baby goats. The video shows newborn goats as young as one and two days old being shot with a stun gun before having a metal rod inserted into their forehead to end their life. Other goats appear to be watching as this was carried out.

Distressing images show dead goats, including both kids and adults, dumped like waste in piles across the farm.

Goats have adapted to live in rugged, mountainous areas, where they would dig, climb, play and browse for food. In contrast, goats at Pasture House Farm are held in large, crowded sheds with no enrichment and no access to the outdoors.

Goat dairy consumers may not realize that zero-grazing systems are the norm in goat farms. In a survey of Milking Goat Association farmers in England and Wales, which was published in 2019, just 17 percent of respondents said that their dairy goats are allowed to graze outdoors.

Delamere Dairy’s website claims that its suppliers keep the goats indoors for “the welfare of the goats, not the convenience of the farmer.” Goats, the company explains, are not well-suited to the British climate and would be at risk of foot infections if they spent time on soggy ground.

A spokesperson for the company reiterated this and said that the goats are housed in “large, airy, but draft-free barns” where they are “free to roam around in familiar groups, on dry straw bedding with a constant supply of food and water.”

These indoor goat farms are different from natural goat habitats. “Goats naturally live in complex social groups and the use of their horns plays a strong role in communication,” says veterinarian Molly Vasanthakumar. “Zero-graze systems inherently deny goats access to elevation and spaces to hide, the ability to selectively browse and the space to form dynamic groups.”

Adds Vasanthakumar, these goats are also de-horned in painful procedures. “Farms like Pasture House necessitate disbudding [a painful procedure that involves burning off a young goat’s horn buds with a hot iron], subsequently denying them the use of their horns. Therefore it is impossible for farms like this to provide these highly inquisitive and intelligent animals a ‘life worth living’.”

“The accumulation of poor living conditions, mental health concerns, and denial of basic natural behaviors cancel out Delamere’s claim that goats need to be housed in zero-grazing systems,” says Ayrton Cooper, AJP’s Campaigns Manager.  “Convenience and profit is what drives this industry.”

Rather than being an isolated case of abuse, campaigners believe that Pasture House Farm is actually typical, “representative of commercial goat farming in the U.K.” AJP’s new investigation suggests that the ethical issues associated with dairy farming aren’t limited to cows. “We urge people to make their choices count by opting for plant-based foods as the only ethical alternative to dairy,” says Cooper.