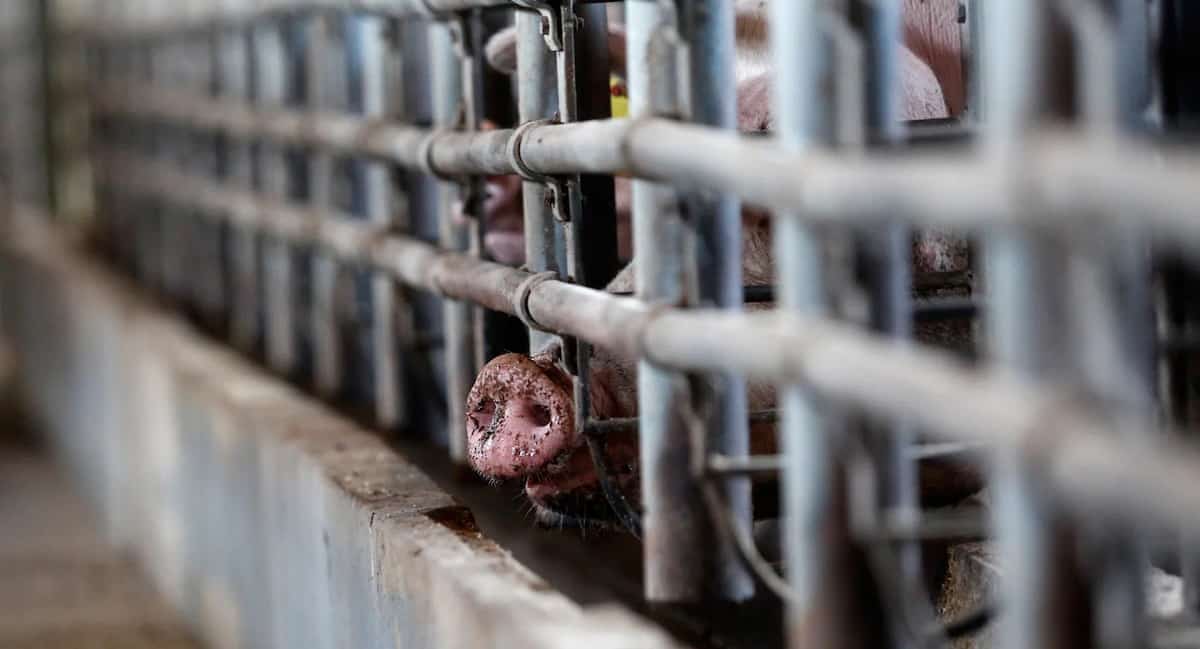 A Direct Action Everywhere (DxE) investigation, in collaboration with an industry whistleblower, has culminated with the release of “Unseen.” The mini-documentary chronicles pigs’ harrowing 700-mile journey across the American southwest, with misconduct that’s cruel to pigs and threatens public health.

Hidden cameras planted at Yosemite Meats in Stockton, California, show diseased flesh cut away from carcasses which are then approved by USDA inspectors for human consumption. Other footage showed pigs regaining consciousness after having their throats slit while upside down on the slaughter line.

Raven Deerbrook, who led DxE’s investigation in addition to directing the film, followed transport trucks emerging from Smithfield’s Circle Four Farms in Milford, Utah—the largest pig farm in the county. It was previously investigated by DxE in 2017.

Unseen shows rotten pig flesh at Yosemite Meats dumped on the ground in open air, where it is fed on by wild animals—a proven hazard for the spread of zoonotic diseases like COVID-19.

Despite ghastly infractions of the USDA’s guidelines, the USDA and Smithfield have taken no remedial action. Activists say the demands the industry sets on kill lines are despicable to humans, resulting in many amputations and deaths each year, even as slaughterhouses breed the largest COVID-19 outbreaks in the US. These protocols, they say, also ensure that pigs suffer significantly before death.

DxE previously exposed gruesome “ventilation shutdown” mass killing of thousands of pigs with shocking footage recorded in May. They say the new abuses exposed in Unseen further demonstrate the depths of the industry’s cost-saving cruelty.

DxE says the public is opposed to industry abuses, but are denied truthful information by the animal agriculture’s corrupting influence over our political system. And they say Smithfield is a prime example. The company contributes large sums to political candidates, who in turn target the investigators, rather than taking action to stop the misconduct they reveal.

As part of its #CancelAnimalAg campaign, DxE is calling on California Governor Gavin Newsom to issue a moratorium prohibiting the construction of new factory farms and slaughterhouses in the state, with a plan to phase them out entirely over the next five years. Rather than doubling-down with subsidies to support the construction of facilities, like the $2,000,000 incentive California contributed to the construction of Yosemite Meats, activists are calling for an end to the devastation once and for all.

“Expose the truth to protect our future, to prevent pandemics while we still can,” Deerbrook implores in the film’s narration. “Turn towards suffering with the strength of mercy, because our fates are connected if we don’t stop this industry.”