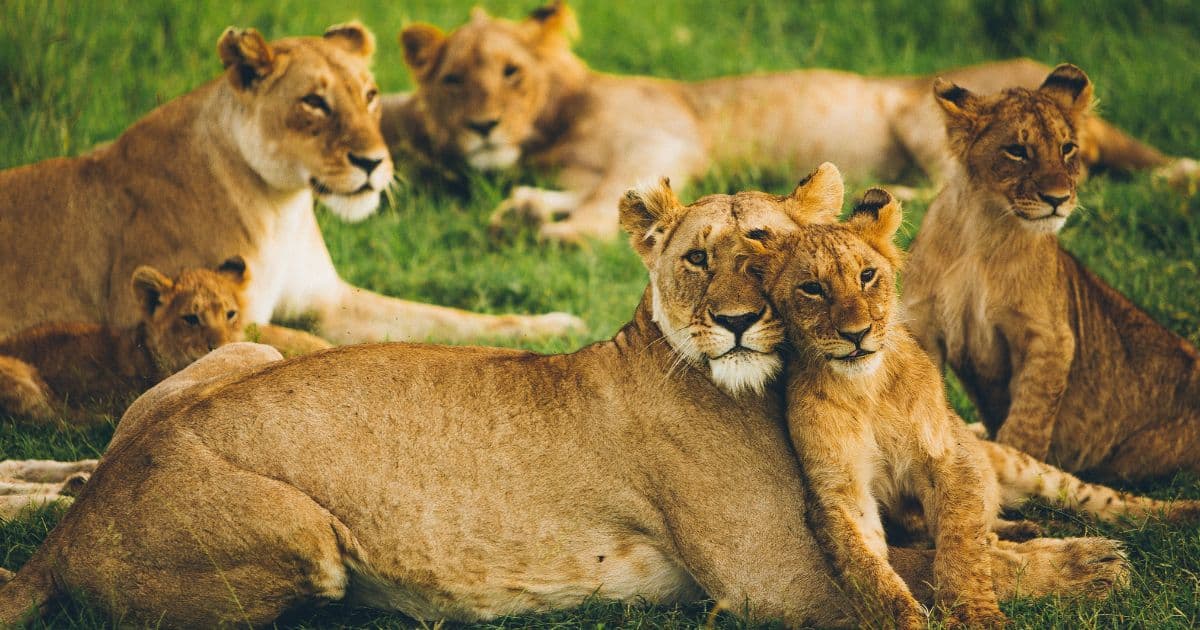 In 2021, the South African government seemed to signal an end to its once booming captive lion industry — from the breeding of big cats to their use in tourist attractions, canned hunts and the trade in bones and other body parts. In August, the government even reported an environmental minister would be working to assign a team tasked with planning an end to the industry, including paths forward for lion breeders.

Yet despite these announcements, the $180 million-dollar industry continues to rake in profits, with estimates of the number of lions remaining in hundreds of South African facilities ranging from 8,000-12,000 animals. Now, new research reveals how tourists unwittingly make life worse for these lions, despite, in many cases, a firm desire to support these animals and the conservation of their species with their travel dollars.

The study, published October 14 in the journal Animals and conducted by New York University and Four Paws, examined 49 YouTube videos taken by tourists at 11 or more safari parks in South Africa. Its authors found practices they describe as “inherently harmful to cub development,” including inbreeding, the early separation of cubs from their mothers and forcing nocturnal animals to be active during the day to entertain tourists.

The majority of the videos studied, 61 percent, showed cubs of less than three months of age. These infant cubs — isolated from their pride at a tender age — are often fed a formula meant to replace their mothers’ milk, which may lead to weakened immune system functioning and nutritional deficiencies, the researchers write. Among other indicators of poor animal welfare, the researchers saw barren environments lacking enrichment and cubs engaging in “stress behaviors” including aggression and avoidance.

Most tourists are probably unaware of the negative effects these attractions have on animals, “and may even believe that they are helping the cubs,” according to the study. The researchers also suggest it may be a well-meaning if misguided fondness of animals that draws people in for a rare up-close interaction with species they have never encountered before — not to mention the chance to publicize these interactions on social media.

The Independent reports that many travelers to South Africa’s lion attractions believe they are aiding cubs who will ultimately be released into the wild. Yet, most of the time, the opposite is true. In 2019, Natasha Daly wrote for National Geographic, “The wildlife tourism industry caters to people’s love of animals but often seeks to maximize profits by exploiting animals from birth to death.”

In a 2021 report, Humane Society International wrote that these lions are “bred for slaughter” and, following separation from their mothers hours after birth, “exploited for profit throughout their entire lifetimes.” For many, those lives end when the lions become part of a global bone trade or are sent to canned hunting facilities, where in an enclosed area, hunters take aim at lions lured with bait or even drugged, and unable to escape danger.

Almost immediately after birth, cubs born into the industry are separated from their mothers. In the wild, lions live in large groups called prides, a trait that is unique among cats. Female cubs stay with their pride for life, later protecting and providing food for the group and raising its young, while male cubs ultimately form their own prides. The isolation from other lions and close interaction with humans inherent in this captive industry is a far cry from the natural behavior of lions.

For the first few months of their lives, cubs are used for tourist photo opportunities. The travelers are allowed to hold and pet them — some may even be drugged to keep them tamed for these unnatural interactions. When cubs become too large and strong to directly engage with humans, their use by the industry continues in the form of “walk with lions” experiences. Tourists are offered the chance to walk alongside the big cats in what may be marketed as their natural environment. Eventually, many will be sent to canned hunting operations, in which the animals are confined within an enclosed area, offering little to no escape from hunters.

Lions are considered to be one of the “big five” species highly sought by hunters. But hunting a captive-bred lion is significantly cheaper than hunting the cats in the wild, and while their wild counterparts are more elusive, lions kept within a canned hunt area are an easier target for several reasons, the Humane Society points out. The cats are sometimes drugged or lured with food, and having been raised in captivity, the lions may not be naturally afraid of humans. The Guardian reports that to hunt a wild lion in Tanzania may cost around $57,000 USD, while in South Africa, a captive lion can be hunted for approximately $5,000. Both, however, are most likely activities that only wealthy travelers can afford.

Canned hunts — and their violent and shocking visual images of slain wildlife — tend to get all of the attention when it comes to global outrage. Yet, it’s the attractions that exploit lions as cubs and adolescents that draw in unsuspecting tourists from around the world. These cub attractions are a fundamental part of the same system that ultimately puts lions in a hunter’s sight. It is their early use in what many consider entertainment that causes these wild animals to lose their fear of humans, leaving them even more vulnerable when hunted.

Also unbeknownst to most tourists may be the international trade in lion body parts, especially bones, claws and teeth, and its ties to the captive industry. Those lions not sent to canned hunting operations are likely killed to fuel this trade that claims the lives of wild and captive cats alike. Reportedly, some end up in slaughterhouses, where many lions are killed at a time, a fate well-known when it comes to animals considered livestock but likely unimaginable to wildlife tourists when applied to lions.

This disconnect in the minds of wildlife-lovers is no accident. According to Four Paws, “in the wildlife tourism industry, the exploitative side is often not obvious and the facilities themselves can deceive visitors by telling them a false backstory of the animals in question.”

South Africa is a popular tourist destination, drawing visitors from around the world, in part due to its wildlife tourism — which includes many other activities such as wildlife-viewing safaris in protected national parks.

In 2021, U.S. tourists topped the list of travel to and spending in South Africa and, most notably, the U.S. represents a major market that bolsters the nation’s trophy hunting industry. According to a 2019 survey, the industry was “economically destabilised” by a 2016 U.S. ban of trophy hunting imports, leaving 52 percent of industry respondents turning to other markets for the trade in lion bones.

‘No Education or Conservation Value’

Globally, the diverse field of wildlife tourism is valued at $135 billion in 2022. The beauty and awe of seeing wild species before our eyes draws travelers from all over the world, in part due to a love of animals and nature. Marketed as conservation, businesses offering wildlife interactions often lead tourists to believe that their interest and financial support contribute to the welfare of these animals and the survival of their species despite strong evidence to the contrary.

Lion Encounter, which has locations in Zambia and Zimbabwe, states that its lions are put into prides for release once they are no longer in interactions and walks, and that while interactions with cubs are available, physical contact is not guaranteed as the young lions “are not drugged or trained to act like pets.” Encounter is self-described as “an active conservation program” and “Africa’s first genuine program to ethically re-introduce the offspring of captive-bred African lions back into the wild.”

There is disagreement among experts about the conservation benefits of the captive lion industry. While some conservationists and researchers believe that lions, being social animals who live in prides, can be successfully released especially if they are released in number, others disagree. Four Paws states that captive-bred cubs in this industry “can never be released into the wild after being in such close contact with humans because they have never learned how to hunt.”

One industry group is more definitive, however. In its 2019 report titled Evaluating Captive Wildlife Attractions & Activities, the Southern African Tourism Services Association concludes that there is “no education or conservation value in tactile interactions with predators that cannot be achieved better by other means,” and that captivity interferes with the natural behaviors of a large predator.

Dangers to the Public

Most animal advocates warn about dangers facing tourists from stressed wild animals. Lion cubs can be forced to engage with the public for up to 8-10 hours of the day, according to Four Paws experts, and that added stress can have dangerous consequences.

Incidents have shown that even as babies, lions can indeed pose a threat. In 2012, an interaction with a one-year-old lion cub led to 60 stitches to repair bite wounds to a tourist’s face, near to an artery in her neck.

Forcing captive wild animals into “unnatural and uncomfortable proximity to people” creates a risk to humans, say advocates with Born Free USA. Despite the use of “cruel training” or drugs to subdue the animals, they “remain essentially ‘wild,’” still presenting a danger to public safety, according to the organization.

There may be public health risks posed by these close encounters with wildlife too. Zoonotic disease can pass between species, leaving tourists vulnerable to illnesses that may be present in these captive lions kept in close interaction with humans daily – humans traveling to and from places all over the world, potentially further spreading disease.

A 2020 study by Blood Lions and World Animal Protection traced a connection between captive lions and 63 pathogens – parasites, viruses and bacteria – also found in wild lions, including zoonotic pathogens that can be transmitted to humans.

Researchers warn that our increasingly close proximity to wildlife due to climate change and habitat loss is already putting us at higher risk of zoonosis and pandemics. The United Nations reports that 60 percent of currently known infectious diseases and 75 percent of those emerging are zoonotic in nature.

Much of the public supports making life better for these captive animals. A May 2022 international survey of 10,900 people found that 74 percent of South African citizens, along with 84 percent of international travelers, favor “wildlife-friendly tourism” over canned hunting.

Yet the dismantling of a multi-million dollar industry that still holds thousands of captive lions will undoubtedly be a complicated process.

Four Paws, which hopes to work with the South African forestry and fisheries department to phase out captive lion cubs, emphasizes that even if the lion industry comes to an end, other species such as endangered tigers will remain in jeopardy.

Like the South African Tourism Services Association, Four Paws urges the support of “true sanctuaries,” offering this list including its own LIONSROCK Big Cat Sanctuary as a guide to travelers.

Organizations caution that it is hard to move forward without a full assessment of where we are. “There needs to be a proper audit,” Dr. Louise de Waal of Blood Lions told Associated Press in 2021. “How many facilities and where, and how many lions do they have?” Ultimately, many of the facts about these facilities remain murky. Says de Waal, “There’s very little transparency.”

15 Animals That Mate for Life