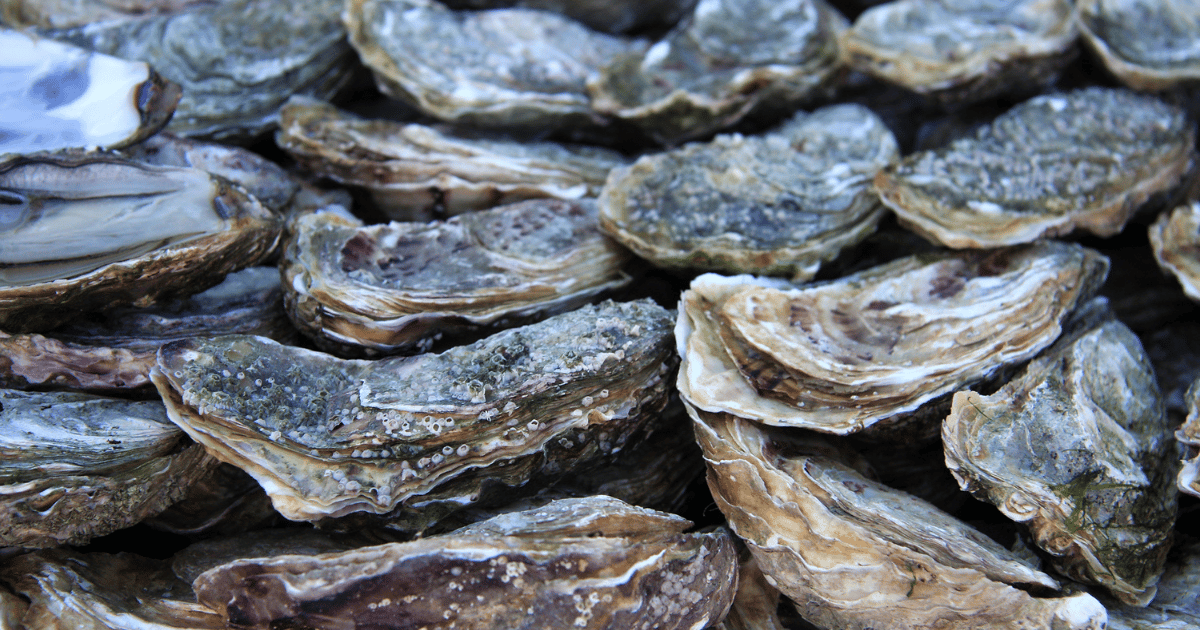 Few animals prompt such a variety of reactions as the oyster. Eaten across the world, some consider them nothing less than a salty ambrosia, while others can’t get past their less-than-appetizing appearance.

But oysters are more than a food, they’re an animal, and specifically a keystone species in marine habitats on every continent. Unfortunately, their numbers are declining worldwide, primarily due to human activities.

How Are Oysters Farmed?

Oyster farming comprises a variety of techniques, but there exist a few founding principles derived from oyster biology.

Oysters filter water through their gills, feeding on algae and plankton in the water.  Oysters do not contain binary sex organs like humans. Instead, each oyster usually contains both sperm and eggs and can even change sex throughout its lifetime. When matured and ready to mate, oysters secrete sperm or ova into the seawater, which will combine and become a free-swimming larva.

Oyster farmers place adult oysters into a controlled environment and manipulate the temperature to induce this reproductive process. After a few weeks, the larvae are ready to attach themselves to an available surface, usually provided by the farmers in the form of a mass of shell or rock, called “cultch.” As the larvae settle onto the cultch, they become “spat.”

All forms of oyster farming involve taking this newly formed collection of spat and providing it with food while avoiding exposure to predators and harsh environments.

The most traditional form of oyster farming is also the most basic. The bed culture method simply comprises placing the cultch onto the seafloor near the beach, allowing the oysters to grow for a few years, and then dredging with small boats or by hand once they are mature. It is often called “bottom” culture because, well, the oysters rest on the bottom of the ocean. However, this can expose the cultch to mother nature and potentially damage oyster populations, which is why many farmers will use some of the following “off-bottom” methods.

This method of oyster farming involves placing a large steel rack on the shoreline with mesh bags of oysters on top. The racks allow the oysters access to the water as the tides come in, while protecting them against any potential predators like crabs or gulls.

Farmers using this method will construct large nets and dangle them in the ocean, usually suspended by lines or buoys. The advantage of this method is that oysters will grow very quickly, as they have 24/7 water access. This method is sometimes also called the “floating bag” approach.

In intertidal longline culture, oysters are tied to a rope and strung along the shoreline, about a foot above the ground. This technique is similar to the rack and bag culture, but with more of a DIY twist. As the tide comes in, the oysters will have access to water and nutrients while still avoiding many beach predators.

How Long Do Oysters Take To Grow?

Oysters become juveniles at one year, but usually are not eaten until they reach adulthood, which is around three years old. Oysters grow at a rate of about an inch every year. The natural lifespan of most oysters can be up to 20 years, far longer than oysters bred for human consumption.

Where Are Oysters Farmed?

Oysters are part of local cuisines across the world, but there exist hotspots of farming activity. The top five oyster-producing countries are as follows:

Despite China’s massive oyster production, the average consumer anywhere else is unlikely to find a Chinese-sourced oyster on their local supermarket shelves. China consumes nearly all the oysters it produces. In fact, oysters are very rarely traded internationally. Only around 5 percent of total oyster production will ever move between countries, as the shelf life of an oyster is extremely short.

Within the U.S., oysters have historically been caught wild in the Gulf of Mexico and farmed more in the Northeast and Northwest. Chesapeake Bay has become an important center for oyster farming over roughly the last decade, in an effort to make up for a decline in the number of oysters being landed there that has gone on for over 50 years, caused in part by overfishing and other human activities.

Why Are Oysters So Important?

Oysters themselves are a keystone species in many ocean ecosystems. Oysters are known to filter seawater for nitrogen and sediment, which makes the water clearer and allows seagrasses to thrive by providing better access to sunlight. Oyster reefs can protect beach habitats from tidal currents and even provide housing for fish, crustaceans and other marine life.

Ecological protections in sites historically rich with oyster populations, like Chesapeake Bay, should aim to protect their existence as much as possible. Unfortunately, human activity, including oyster farming, has been decimating oyster populations for hundreds of years, a process that continues to this day.

Unlike most forms of animal agriculture, oyster farming has one major advantage: emissions reduction. In oyster farming, food does not need to be grown or caught to sustain oysters, which reduces land use, transportation emissions and the burden on other ecosystems. Oysters also don’t produce methane during their digestive cycles, unlike ruminant land animals like cows and sheep. Because of these factors, scientists estimate that oyster farming releases no methane into the atmosphere, and negligible amounts of carbon dioxide and nitrous oxide.

However, it’s not all good news for the planet. First, hotspots of oyster farming are at risk for depleting their natural ocean resources and populations. For example, the natural oyster reefs of Chesapeake Bay (once so large they threatened to sink ships in the colonial period) are today mere remnants of their former glory. Some estimate that the oyster population is 100 times smaller than two centuries ago, partly due to both historic and modern-day overharvesting. The decline of oyster populations is part of a vicious cycle: because oysters filter the water naturally, their decline makes the water less suitable for all marine life, including oysters.

Oyster farming also increases the possibility of disease. It’s a well-known fact that animal agriculture increases the likelihood of animal-based and zoonotic diseases (thus increasing the threat of another pandemic), and oysters are no different. Disease has been known to wipe out entire oyster populations across coastal regions. The controlled process of mating oysters can increase the likelihood of spreading diseases among populations, and the authors of this 2016 article in the Philosophical Transactions of the Royal Society note that while oyster farms can take some measures to decrease disease, more research is needed to better understand how diseases spread among shellfish.

Evidence suggests oyster farms that harvest the oysters before 18 months can actually protect local ecosystems from disease through water filtration. However, there currently exist no U.S. federal guidelines aimed at protecting against disease spread by utilizing this research, and most farmers don’t harvest their oysters before two years. Also, the trade and transfer of oyster spat can introduce invasive species into ecosystems, such as the Mytilicola orientalis pest introduced to Ireland as a result of oyster farming.

Oyster farms can also physically disturb the seabeds with machinery and structures, and collection equipment can harm local ecosystems. Most oyster farming equipment is not cost-effective to remove from the ocean, so farmers will often leave it in the seafloor, which can change tidal patterns, create silt build-up, and negatively affect marine life. Farming practices have been shown to reduce seagrasses and benthos, the organisms living on the ocean floor. What’s more, these populations tend to grow again if the oyster farms are left unstocked.

Unfortunately for those prone to slurping down these bivalves, oysters are known to retain toxins and pollutants from the seawater. Oysters farmed from coasts with plenty of pollution (which is most of them) are likely to become toxic themselves. Health-conscious consumers may want to be mindful of this fact next time they are browsing the freezer aisle or tins.

Supporting sustainable ocean activity is a critical component of any wildlife and environmental conservation, despite a lack of public interest in this area. Since oysters are a critical species in marine environments, it is important to maintain their populations while avoiding overharvesting and the damaging effects of oyster farming techniques.

One such solution is ocean rewilding, which is essentially the same concept as tree planting and ecosystem restoration on land, except for marine life. Climate-conscious individuals can research local rewilding initiatives and support them, either through donations or volunteering. Such projects include the Massachusetts Oyster Project based in the U.S. or the Wildlife Trust oyster rewilding project and Seawilding Project in the U.K.