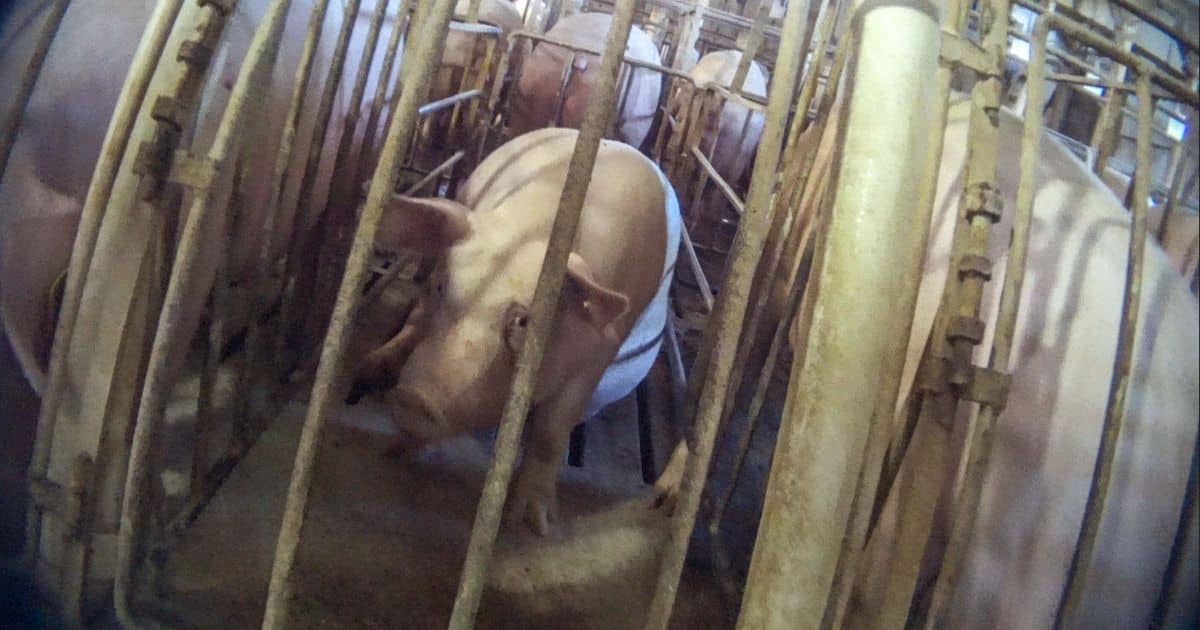 On October 11, the Supreme Court will hear oral arguments in the pork industry’s challenge to California’s farmed animal protection law, Proposition 12. As the justices consider the fate of legislation prohibiting intensive confinement of farmed pigs, calves and hens, the animal advocacy group Mercy for Animals has released a new undercover investigation reporting on the conditions mother pigs and their piglets experience on farms that use gestation crates.

The footage was filmed this summer by a Mercy investigator inside a Minnesota farm that sells piglets to be raised at “finishing farms” for slaughter. What the investigation revealed isn’t necessarily new — many investigations have shown the confinement of pregnant pigs in gestation crates, says a managing director for Mercy, AJ Albrecht. Still, she describes this particular footage as “vivid and clear,” and set apart by the audio.

Pigs can be heard squealing loudly in their crates, and piglets cry out as they are castrated without anesthesia – a standard industry practice.

Among other documented incidents, the investigation found pigs bleeding and injured, and the bodies of newly born piglets on the floor. The video’s release comes as National Pork Producers Council v. Ross plays out in the nation’s highest court, threatening the reversal of Proposition 12 and the protections passed by a clear majority of California voters.

Proposition 12 regulates the amount of space in which farmed animals are confined for foods produced or sold in California, effectively prohibiting the use of gestation crates, veal crates and battery cages. The enclosures at the heart of this case are so small that animals are denied the room to turn around or, in the case of hens, stand up or spread their wings.

Female farmed pigs used for breeding are often kept in gestation crates throughout their pregnancies. Some are moved to similar enclosures called farrowing crates after giving birth, where they are unable to reach their piglets through the metal bars. Proponents of crates argue that piglets are safer in this system, protected from being crushed by the weight of their mothers.

The American Veterinary Medical Association characterizes gestation crates as “increasingly controversial,” even among pork producers. Yet the industry group defends the use of these crates in its opposition to Proposition 12 as a protection for the animals, despite the veterinary association findings that crates restrict behaviors, that pigs housed in these enclosures are “less active,” may exhibit the stereotypical behaviors of stressed animals and “may have a higher incidence of injuries such as pressure sores, ulcers and abrasions.”

The U.S. Department of Agriculture has also found that crated pigs may have weakened cardiac and immune functioning. Mercy researchers attribute bleeding and wounds found on pigs documented in their investigation to repeated rubbing against the bars of their crates.

Pigs kept in these crates can also be at higher risk for joint and leg problems, urinary tract infections and aggressive behavior, according to data compiled by the Humane Society of the United States.

Yet the nation’s leading veterinary association has stopped short of taking a stance against gestation crates, noting that their advantages for pork producers include more efficient feeding and ease of providing veterinary treatment. These arguments assume producers provide regular and individual care to the thousands of pigs who tend to be packed into the factory farms that use these crates.

In 2018, The Guardian reported that the mortality rate among female pigs on U.S. farms with more than 125 animals had soared from 5.8 percent to 10.2 percent between 2013 and 2016. Pigs that have suffered prolapses can be seen in Mercy’s new footage, and in this 2018 report, prolapse — uterine, rectal or vaginal — was cited as a major contributor to mortality, either directly leading to death or resulting in animal culling.

‘An Issue of Democracy’

Proposition 12 was passed with over 60 percent of the vote, which is why this Supreme Court hearing, says Mercy’s Albrecht, “is an issue of democracy.” “Corporate greed,” she also says, is behind the meat industry’s fight to “silence voters” by attempting to have the law overturned.

The National Pork Producers Council is arguing that Proposition 12 is an unconstitutional restraint on interstate commerce. But Kelsey Eberly counters that the pork industry’s arguments “lack any foundation in the Constitution.”

Eberly is Harvard’s Animal Law & Policy Program Legislative Policy Fellow and the author of a recent report outlining potential widespread impacts of a ruling against Proposition 12. She told Sentient Media in August, “The pork producers are asking the Supreme Court to strip states of their ability to not only ban cruel and unsafe products but also combat climate change, protect consumers from financial scams and much more, whenever regulation economically inconveniences out-of-state industries.”

What Is Proposition 12 in California?