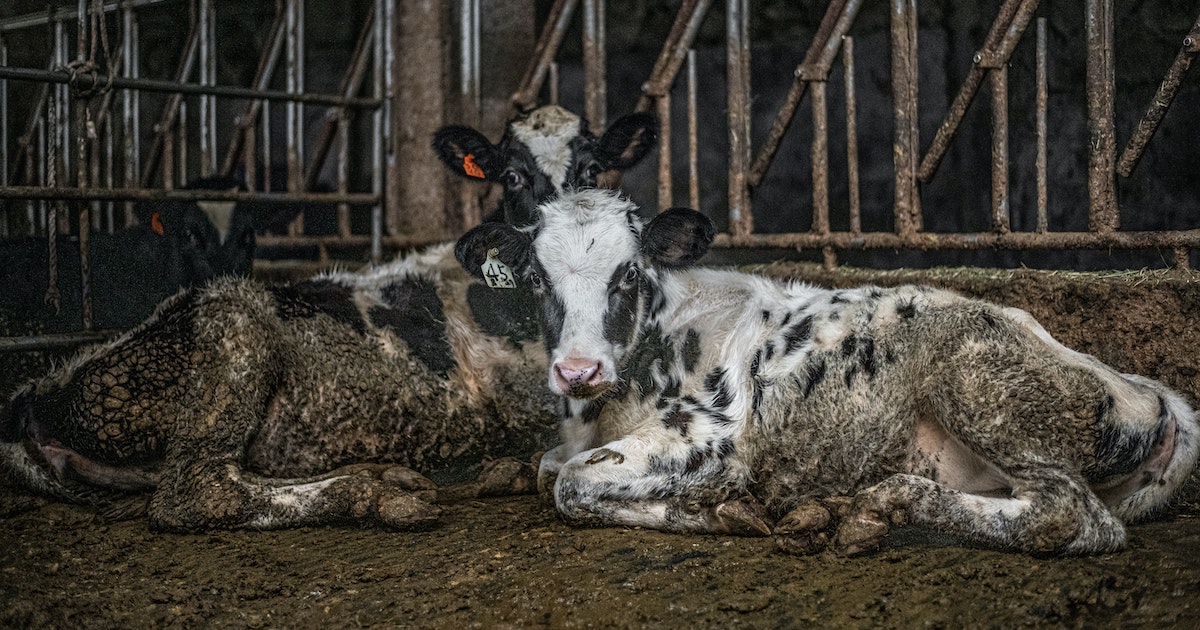 In 2018, California voted by over 60 percent to pass a new law to protect farmed animals starting in 2022. Nearly four years later, the law has yet to be fully implemented. Trade associations for meatpacking and meat processing companies and big-box retailers are spending money to fight this law. They oppose consumers’ demand, through Proposition 12, to give farmed egg-laying chickens, mother pigs, and baby cows room to turn around freely, fully extend their limbs, stand up, and lie down.

Proposition 12 is a law that California voters passed in 2018 to define the minimum amount of space that farmers must give to cows, pigs, and chickens who are held in confinement. The law applies to food products made from these animals and sold in California, even if the animals were raised and slaughtered outside of the state.

Who Are the Prop 12 Supporters?

The primary sponsor of the proposition is The Humane Society of the United States (HSUS). HSUS was joined in supporting the proposition by other groups including the Animal Legal Defense Fund (ALDF). More supporters are listed on the Prevent Cruelty California campaign website, including animal protection groups, faith leaders, veterinarians, family farmers, elected officials, and other allied groups.

Who Are the Opponents of Prop 12?

The primary opponents are the American Farm Bureau Federation (also known as the Farm Bureau) and the National Pork Producers Council.

The meat and poultry processing industry is highly concentrated in its economic power—meaning that just a few companies control the chicken, beef, and pork sectors. About 40 U.S. pork producers own about two-thirds of female pigs who are kept for breeding. Most pig farms are concentrated in just a couple of states, and the top pork producer in the U.S., Smithfield Foods, has about 530 company-owned and 2,100 contract farms producing about 18 million pigs every year (including 1.2 million sows).

In the hog- or pig-farming industry, four meatpackers control nearly 70 percent of the market: JBS, Tyson, Smithfield, and Hormel. Through production contracts with farmers, the companies dictate how pigs will be raised in America—otherwise, they do not pay for the service that the farmers provide in raising the pigs from birth to pre-slaughter.

The companies own the pigs and require the farmers to maintain the land, equipment, and other “inputs” like food, water, and labor. In exchange, they pay the farmer based on the pigs’ final weight before slaughter. Nearly three-quarters of all pigs raised in the United States were part of contracts in which the pigs were not owned by the farmer.

What Are the California Prop 12 Regulations?

California’s Prop 12 regulations are set by the state’s Department of Food and Agriculture (DFA) and the Department of Public Health. The California DFA is currently writing the rules that will provide more details on how the new standards will take hold. The standards will require farm operators to implement new space minimums for confined animals. Business owners and operators will also be required to sell only veal, pork, and eggs (liquid or in-the-shell) from animals raised according to the new space minimums.

Prop 12 required egg-laying hens to be provided with a minimum of 1 square foot (144 square inches) of usable floor space per hen by 2020, and up to 1.5 square feet of floor space per hen in one-floor housing systems. These dimensions were initially set in the United Egg Producers’ 2017 cage-free housing guidelines.

Starting in 2022, female pigs kept for the purpose of breeding, who are at least six months old or pregnant, must have at least 24 square feet of usable floor space per pig. That comes to about 5 feet by 5 feet of space while typical enclosures for breeding pigs are currently about 7 feet by 2 feet.

Cows raised to be sold as veal must have at least 43 square feet of usable floor space. Baby cows are ideally raised with their mothers and other cows in group housing, but in most U.S. states and many countries, it still is legal to raise them in isolated hutches that give them just enough room to stand. Veal hutches are typically 2.6 by 5.9 feet (or 0.8 by 1.8 meters), according to one estimate. They are so small that the baby cows raised in them can’t turn around.

Prop 12 went further than previous laws on the books for California’s farmed animals. Prop 2 protected hens, mother pigs, and veal calves by describing the behaviors they should be able to display while in confinement. Prop 12 specifies with precise numbers the minimum amount of space that farmers must allow when enclosing egg-laying hens (including chickens, turkeys, ducks, geese, and guinea fowl), pregnant female pigs, and baby cows raised for veal. Prop 12 also adds a sales ban on specific meat and egg products that come from animals not raised in the new minimum cage sizes.

For the past decade, meat processors, meat retailers, egg producers, and major retail businesses have contested the implementation of animal welfare confinement statutes passed by the people of California, including Proposition 12. The Humane Society of the United States and other animal welfare organizations have intervened as parties on behalf of the state, to defend this and similar laws.

Proposition 12, passed in 2018 for full implementation in 2022, refines the work of animal welfare advocates in passing Proposition 2 and AB 1437, both of which went into effect in 2015. Several lawsuits challenged Prop 2, AB 1437, and Prop 12 with the same goal in mind: allowing farming animals in cramped cages to continue.

In 2008, Californian voters passed Proposition 2, the Prevention of Farm Cruelty Act, which went into effect in 2015. The new law required that farmers give hens, sows, and veal calves raised in California the space to stand, lie down, turn round, and stretch. In 2012, William Cramer, representing the interests of egg producers, claimed that these new requirements were too vague to implement. The courts disagreed with him—both the U.S. Court of Appeals, Ninth Circuit in 2015, and the district court preceding it. The Proposition was reasonable in its requirements because “hens have a wing span and a turning radius that can be observed and measured,” which means someone trying to comply with the new law could be expected to figure out the dimensions for correctly sized hen cages.

This multi-state lawsuit contested a California state law (AB 1437) passed in 2010 that required that eggs produced or sold in the state had to come from hens who could fully spread their wings without touching other hens or the sides of their enclosure. The law was a response to egg farmers in California who felt that the state’s recently passed reforms in 2008’s Proposition 2—to give egg-laying hens enough space to “lie down, stand up, turn around and extend their limbs”—would put them at a disadvantage against egg farmers outside of the state.

Missouri and five other states (Nebraska, Oklahoma, Alabama, Kentucky, and Iowa) then claimed in 2014 that AB 1437 violated the Commerce Clause of the U.S. Constitution. Ultimately, more than a dozen states joined the suit. These states lost their suit in the District Court for Eastern California and in the U.S. Court of Appeals for the Ninth Circuit. The Supreme Court declined to hear the case in 2019.

In a prior lawsuit on a similar matter, Missouri’s then-Attorney General estimated that about one-third of Missouri’s eggs sales went to California, which made Missouri the second-largest egg exporter to California in the U.S. Iowa exports another third of eggs eaten in California, according to Iowa State University’s Center for Agricultural Law and Taxation.

The Supreme Court of the United States is reviewing this legal case as of March 2022, after the U.S. Court of Appeals for the Ninth Circuit ruled against the plaintiffs. This lawsuit claims that Prop 12 violates the U.S. Constitution’s Commerce Clause, and is led by the National Pork Producers Council and the American Farm Bureau Federation, against Karen Ross, the Secretary of the California Department of Food and Agriculture.

The lawsuit also names as defendants Sonia Angell, the director of the California Department of Public Health from 2019 to 2020, and Xavier Becerra, the Attorney General of California. Rob Bonta and Tomás Aragón were substituted for their predecessors as they took up these posts.

The North American Meat Institute (NAMI)’s lawsuit challenges Proposition 12, representing the interests of meat processors and retail stores such as Cargill, JBS USA, Smithfield Foods, Wegmans, Chipotle, Target, Whole Foods, Tyson Foods, and Walmart. NAMI appealed its case in 2019 in the Ninth Circuit Court of Appeals after losing its initial case in the U.S. Central District Court of California. Both courts found that Proposition 12 did not violate the commerce clause, and denied NAMI’s request for a preliminary injunction. Had the injunction been approved, the plaintiffs would have succeeded in canceling the proposition’s impact on sales of animal products.

Defendants included Xavier Becerra, Karen Ross, Dr. Sonia Angell, and Susan Fanelli, who was the Acting Director of the California Department of Public Health in 2019. The 9th Circuit Court affirmed the lower court’s decision on June 5, 2020, and the Supreme Court declined to hear the case in 2021.

The Superior Court for Sacramento County halted enforcement of Proposition 12 because California’s regulations for pork producers have not yet been finalized. Once the regulations are issued, the new law can be enforced 180 days afterward.

In the Supreme Court’s October 2022–2023 term, the justices are expected to hear arguments for National Pork Producers Council v. Ross.

Proposition 12 is part of a worldwide trend and movement of consumers and the businesses coveting those consumers, seeking to improve the conditions of factory-farmed animals such as chickens, pigs, and cows. New Zealand, Australia, the European Union, and many U.S. states (Arizona, Colorado, Florida, Maine, Michigan, Ohio, Oregon, and Rhode Island) have passed laws banning the use of gestation crates for sows, according to the ASPCA. Many of these entities have also passed laws banning the use of cages for egg-laying hens and veal crates. You can learn more about the background and context of Proposition 12 from Vox. As well as supporting this movement and its legislative initiatives, if you’re concerned about protecting farmed animals the best thing you can do is to reflect your priorities in your consumption habits, and send a message to an industry that spends so much effort resisting reform.

In Defense of Prop 12: Why This Historic Law Is Worth Protecting