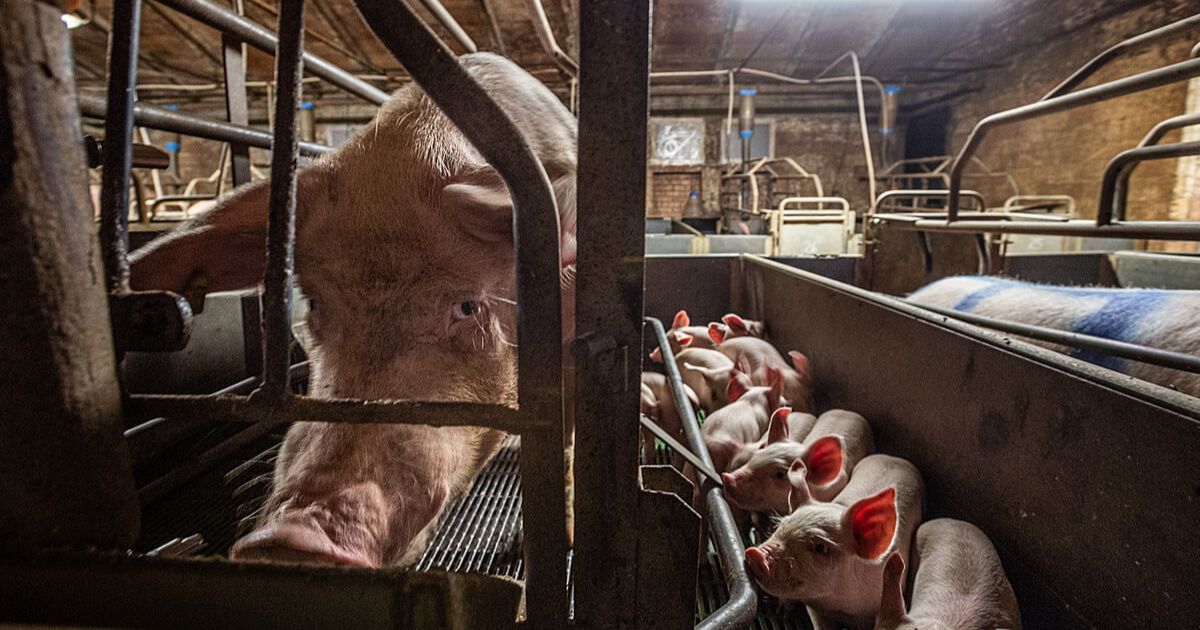 In 2018, the people of California voted to amend the State’s Health and Safety Code to prohibit the in-state sales of pork, eggs and veal from animals that were maintained in extreme confinement and unsanitary conditions. Proposition 12 or Prop. 12 as it is commonly called, was passed into law by a convincing majority of 63 percent.

Even as many veal and egg producers have agreed to improve farming methods to comply with Prop. 12, a significant number of pork companies, backed by the National Pork Producers Council (NPPC), have continued to challenge the measure. Disregarding the votes cast by the people of California, NPPC’s main opposition to Prop. 12 is the ‘massive, nearly apocalyptic impact’ it will have on the pork industry, and the resulting financial burden the industry would have to shoulder.

Pork is a $23 billion industry in the U.S. After unsuccessfully suing the state of California to nullify the law, the NPPC appealed to the Supreme Court. The court agreed to hear oral arguments in the case, scheduled for October 11. On August 15, a number of companies, individuals and organizations filed amicus briefs to weigh in, including Senator Cory Booker, the ASPCA and Niman Ranch. NPPC has also sued Massachusetts’ Attorney General to enjoin enforcement of that state’s anti-animal cruelty law, pending the Supreme Court’s decision on Prop. 12.

“California has the right to relieve animals from their suffering inside tiny, body-gripping cages, and to divest from the products of that cruel confinement,” says Harvard’s Animal Law & Policy Program Legislative Policy Fellow Kelsey Eberly, who authored a 60-page report that catalogs the myriad, diverse state laws and local ordinances that could be imperiled if the Supreme Court rules in favor of the pork producers.

“Yet the pork producers are asking the Supreme Court to strip states of their ability to not only ban cruel and unsafe products but also combat climate change, protect consumers from financial scams, and much more, whenever regulation economically inconveniences out-of-state industries. These arguments lack any foundation in the Constitution.”

Harvard’s Animal Law & Policy Clinic also filed an amicus brief with the court in support of California’s Proposition 12 on behalf of a coalition of animal protection groups.

We now know there are also health and safety benefits in keeping animals farmed for food in less stressful, and more hygienic environments. There is ample scientific evidence that shows that animals maintained in extreme confinement within densely packed facilities are particularly vulnerable to pathogens, and heighten the risk of zoonotic diseases that can easily spread from animals to humans.

Foodborne illness from the consumption of pork causes more than 500,000 infections per year, resulting in thousands of hospitalizations and scores of deaths.

Animal Outlook, along with several other animal protection groups, filed a separate brief earlier this month. Cheryl Leahy, the organization’s executive director, commented: “Not only is it a part of our law but a part of our humanity to show compassion to animals and protect them against extreme deprivation and violence. This must hold true even if, and especially when, committing that cruelty is profitable to some corporate interests. As citizens, we have a right to pass laws to avoid being complicit in some of the worst animal cruelty, and that right is now under threat.”

In the U.S., over six million breeding sows spend their pregnancies in gestation crates. Sows, who weigh anywhere from 300 lbs (female pigs who are impregnated for the first time) to approximately 800 lbs occupy crates that are typically slightly larger than their enlarged bodies at 16 square feet. Left unconfined, a pregnant female will turn around up to 200 times in a day. Held within the metal bars of gestation crates at most 16 square feet in size, with no room to turn around, the females are confined for 112-115 days at a stretch during each pregnancy.

Sows can have up to three litters in a year and are impregnated repeatedly to have anywhere from four to 14 pregnancies before they are slaughtered for meat at three to four years of age. Their short lives are spent shuttling between the metal bars of gestation crates and farrowing crates to nurse their young ones, before being impregnated again.

Prop. 12 rejects the use of narrow, confining gestation crates and increases the minimum space requirement for sows during their pregnancies from 16 square feet to 24 square feet. These requirements apply only to the sows destined to be sold as pork products in California. Currently, only 4 percent of the country’s 66,000 pork producers meet this space requirement for gestation crates, and hence, the NPPC claims that implementing Prop. 12 will have catastrophic impacts on the pork industry.

The ‘Apocalyptic Impacts’ of Prop. 12

With the increased space requirements for the humane treatment of sows, NPPC fears that smaller family farms will be driven out of business because of increased costs. However, pork producers who support Prop. 12 such as Hormel (a company that sells pork products under the Applegate brand) and Perdue (a company that sells pork products under Coleman Farms and Niman Ranch brands, among others) have pointed out that smaller farms have been meeting Prop. 12 standards and producing humanely raised pork for years without going bankrupt.

Niman Ranch products come from 600 pork-producing farms that have managed to meet Prop. 12’s humane standards while turning a profit, indicating that making a profit and being humane to animals need not be as mutually exclusive as top pork producers and the NPPC claims.

The top three pork producers, the WH Group, JBS, and Tyson Foods control large slices of the U.S. market and together the corporations saw record pork sales in 2021. As California represents only 9 percent of the pork market in the U.S., the apocalyptic losses for the pork industry predicted by NPPC are not likely to occur as pork producers who prefer not to comply with Prop. 12 are free to sell their products to the rest of the country.

An in-depth study published by UC Davis Department of Agricultural and Resource Economics states that Prop. 12 “will cause only tiny changes to prices and outputs of the pork industry.” The additional cost of Prop. 12-compliant pork will be $8 per person, per year, which will be passed on to consumers in California.

An amicus filing by the same group of researchers shows that contrary to what the NPPC claims, the price of uncooked cuts of pork in California will rise by 7.2 percent while there will be a 0.3 percent decrease in the price of products produced from non-compliant pork. Given the record profits projected for the meat sector in the coming years, the pork industry in the U.S. will continue to thrive.

The NPPC argues that Prop. 12 will also likely force pork suppliers to provide improved housing conditions to all sows, not just the ones that are California-bound. They also believe that segregating pigs based on the size of their gestation cages will be challenging. Clearly, the NPPC has overlooked the fact that the pork industry already classifies pork products as “no antibiotics” and “crate-free,” which require segregating and tracing animals within facilities.

Moreover, a large portion of the pork industry in the U.S. also sells ‘organic’ products. Under current USDA guidelines, to be considered ‘organic’, pigs have to come from quarters where they are given “sufficient space” and “the freedom to lie down, turn around, stand up, fully.” In other words, allotting larger crates and better animal welfare for pork products destined for California need not necessarily require a complete overhaul of the way factory farms are currently set up.

Over the last decade, growing consumer awareness of inhumane practices within factory farms has driven large corporations and stakeholders in the meat industry to heed customer concerns about animal welfare. Pork producers in favor of Prop. 12 see the new law as an opportunity then, to provide consumers with what they have been demanding for so long now. Collectively, they view the decision to implement or not implement Prop. 12 in their facilities as a business decision and a competitive choice, and not a right that has to be protected from fair competition.

Putting a Price on Compassion

Ultimately Prop. 12 asks for 24 square feet of space for a pregnant sow instead of 16 square feet provided by most gestation crates, which will come at a cost of $8 per year per person among consumers in California. Unlike laws that protect animals used in research and in exhibition centers such as zoos, there are currently no federal laws that protect animals farmed for food. Despite its limitations, Prop. 12 is still considered a watershed moment in the history of animal welfare and one of the strongest animal welfare laws in the world that can have a positive impact on farmed animals.

Multiple states have passed animal welfare regulations banning or stipulating requirements around the use of gestation crates in factory farms that breed pigs. Together, these states cover only 3 percent of the expected production of pork in 2022. By passing laws that further prohibit the sale of pork originating from sows kept in gestation crates or from their direct offspring, California’s voters have shown that their compassion for the animals in our food systems extends beyond state boundaries.

“Our amicus brief illustrates the cruelty and inhumanity of this kind of confinement with photographic and videographic evidence of pigs suffering in these horrific gestation crates,” said attorney Rebecca Garverman, a clinical fellow at Harvard’s Animal Law & Policy Clinic. “We urge the Supreme Court to uphold the right of states to regulate products sold within their borders by keeping the products of such cruelty off grocery shelves.”

What Is Proposition 12 in California?