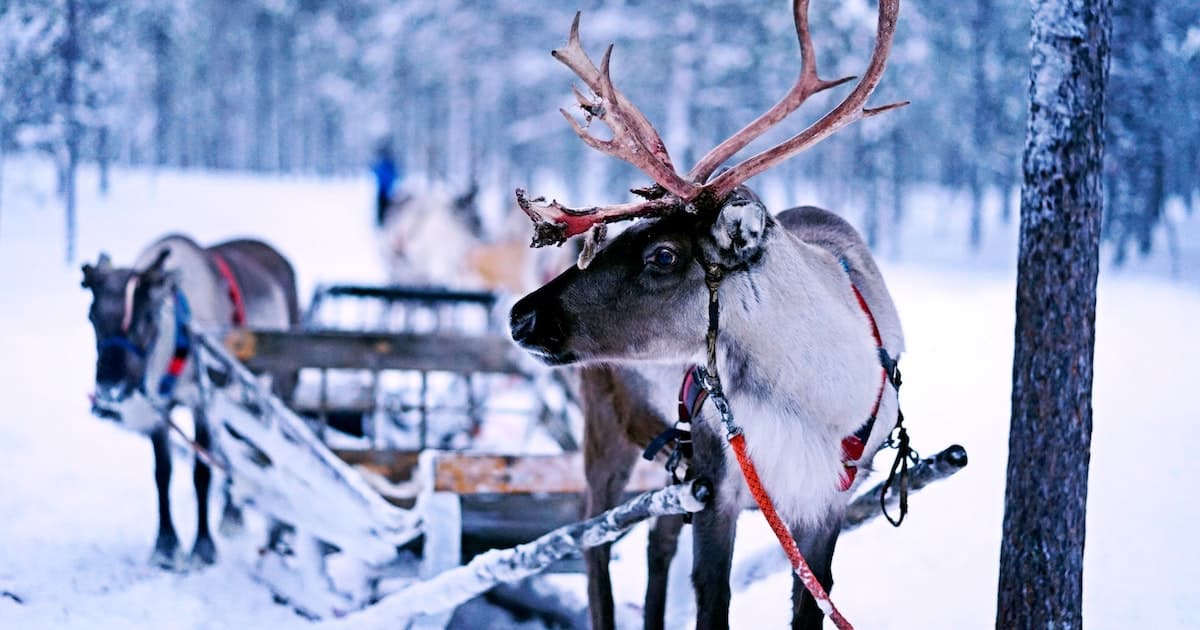 Last year, on December 23, a four-year-old reindeer named Smokey escaped from a festive event in Liverpool, England. He spent a whole month on the loose before being darted by a vet and returned to his “owners.” Smokey was not the first reindeer to make a bid for freedom and he likely won’t be the last. This holiday season, he and thousands of other animals will be hired out and used as props in Christmas parades and displays around the world.

Meeting a reindeer in real life can seem like a ‘magical’ experience, especially for young kids. But what is it like for Smokey and his friends? “Reindeer are intelligent, sensitive, semi-wild animals,” says Isobel McNally, festive events campaigner at UK animal protection organization Freedom for Animals. “They’re used to living in large herds with vast tundra to roam, where they feel safe and comfortable. Festive events where they are separated from their herd, corralled into pens, paraded down busy streets, and subjected to loud noises and manhandling from the public are therefore incredibly stressful.”

The stress caused by attending these public events can make reindeer physically ill. “It’s clear from this that the experience the reindeer have is far from ‘magical’,” says McNally.

Despite rising awareness that it is unethical to keep animals in captivity and make them perform for human entertainment, reindeer displays remain a popular attraction. That, however, could soon change. There’s a new kind of reindeer on the market. One that doesn’t need food, veterinary care, or companionship, and, most importantly, one that can’t suffer. Interactive, programmable, life-size animatronic reindeer, such as those offered by festive display company The Seasonal Group, are making it possible for people to have a ‘magical’ experience without harming any animals.

Although most robotic animals are currently far from convincing, there is huge potential for them to become more true-to-life. Delle, an animatronic dolphin created by special effects company Edge Innovations, could easily be mistaken for a living being. Thanks to a combination of “live puppeteering, programmed behavior, and artificial intelligence,” Delle can swim, perform tricks and interact with people as well as any dolphin, with the key difference being that it is actually an object. The robot can inspire interest in and compassion for animals while helping to keep real dolphins in the wild. Edge Innovations’ first pilot attraction using animatronics is set to open to the public next summer, and the company hopes to one day bring an end to dolphin and whale captivity.

One of the biggest barriers to this kind of technology being used to replace animals across the entertainment industry is money. A single robot dolphin currently costs at least $3-5 million, compared to $100,000 for a real one. But while the initial costs are high, Roger Holzberg, Edge Innovation’s head of Experience Design told Freethink that “over a 10-year lifespan, it saves many, many tens of millions of dollars to only have to plug your animals in at night to recharge.”

With some other animals not costing as much as dolphins, it’s too early to tell if the potential for businesses to save money by switching to robots will apply to the likes of reindeer displays. On the other hand, the fact that technology doesn’t require the same level of upkeep might suit those hiring out reindeer for entertainment, a business model that is only profitable in November and December. Reindeer don’t magically disappear when not making public appearances. They still need food, water, veterinary care, and somewhere to stay for the other ten months of the year.

Although they have lived alongside humans for thousands of years, reindeer have many of the same needs as caribou, their wild counterparts, making them ill-suited to life in a captive environment. Not only that but, as is all too common in the entertainment industry, the animals are vulnerable to neglect and mistreatment. An investigation by UK non-profit Animal Aid at three separate reindeer centers over several months throughout 2017 and 2018 found that when not making public appearances, the reindeer were living in “desolate, unnatural” conditions. Commenting on the undercover footage, a veterinary deer specialist said that animals at one of the centers looked “very thin to the point of emaciation.” On two separate occasions, a worker was filmed kicking reindeer.

Developing the animal animatronics sector might come at a cost, but for captive animals, the cost of the current system is much greater.

Also shaking up the entertainment industry is the world of holographic projection. While laser beams might not sound very entertaining, they can create incredibly realistic three-dimensional illusions. In 2019, Circus Roncalli became the first circus in the world to use holograms instead of animals. Its groundbreaking show used 11 different projectors to display performing elephants, horses, and fish without involving any real animals.

Even entertainment giants who used to be infamous for animal performances are realizing that the future of their industry is animal-free. Last month, Feld Entertainment announced that the Ringling Bros. and Barnum & Bailey Circus, which closed in 2017 following years of campaigning by animal rights activists, is planning to return in 2023—this time without animals. If circuses that used to be heavily reliant on training wild animals to perform are moving forward, there’s no clear reason why the entire entertainment industry can’t follow suit.

A kinder future of entertainment

New and emerging technology such as animatronics and holograms “allow the public to be entertained without causing stress or harm to a live animal, and crucially without perpetuating the idea that live animals are props, not thinking, feeling sensitive creatures,” says McNally.

With a clear public appetite for the entertainment industry to go animal-free and more alternatives than ever before, Smokey’s dreams of freedom might someday become a reality, not just for reindeer, but for captive animals at zoos, petting farms, marine parks, and circuses around the world.

McNally points out, however, that although replacing animals with technology is a step in the right direction, it doesn’t tackle the root of the issue. “At Freedom for Animals, we work to end animal captivity. Animatronics, virtual reality, and holograms are alternatives that may help us achieve that goal, but a wider social shift is necessary to bring an end to exploitation,” she says. “We need to recognize that animals are intelligent, sensitive individuals with their own needs and desires, and create a world in which they are respected as such.”

Click here for more information on how Freedom for Animals is working to bring an end to reindeer exploitation at Christmas and to find out ways you can help.

Technology Is Changing Everything—Including the Way We Eat