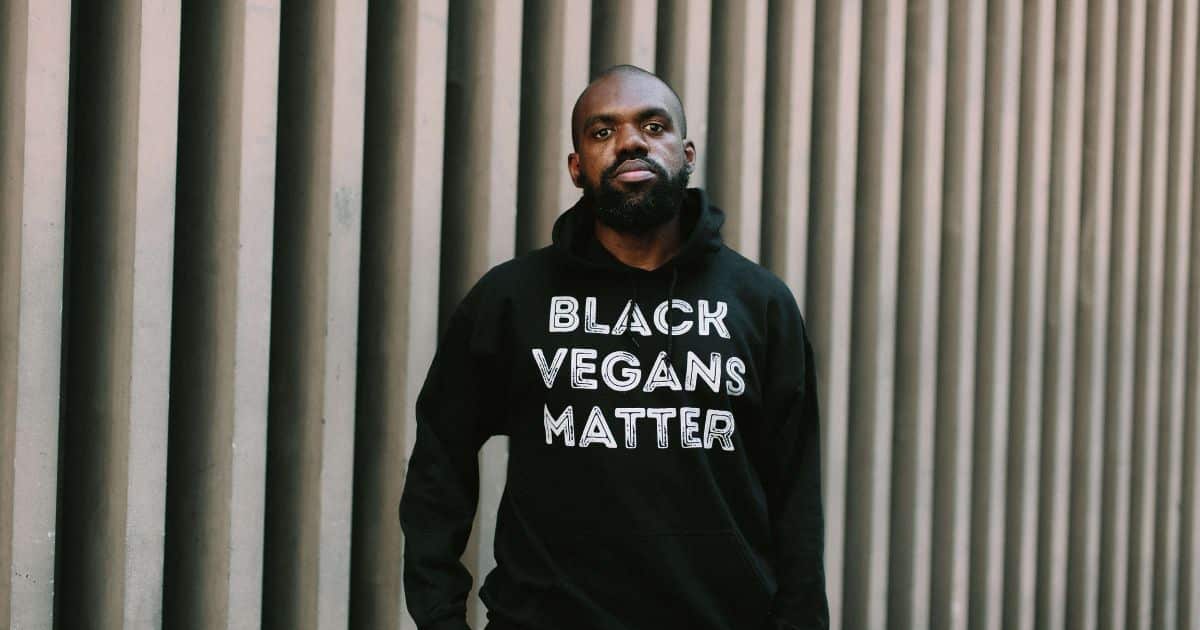 Chris “Soul” Eubanks has made huge waves within the animal rights space through his work with a number of different organizations on behalf of animals but also his never-ending advocacy for advocates of color. In 2021, he founded Apex Advocacy, an organization that seeks to increase BIPOC representation within the animal rights movement through collective liberation and a focus on marginalized areas and communities.

Chris Eubanks: I went plant-based after I watched Cowspiracy. Over the next six to nine months, I really learned more about the ethics of animal exploitation, and abuse and went vegan. That’s when I started to do animal activism locally in Atlanta and started organizing with different organizations. I was working with the Humane League, Animal Save Movement, Anonymous for the Voiceless, PETA and MFA. In 2019, I helped organize Atlanta’s first ever animal rights march.

During this time of being involved in animal activism, I felt like there were a lot of opportunities for the animal rights community to involve more People of Color, have a bigger base of activists and a more diverse base of activism. However, I didn’t really know how I wanted to lend my energy towards that. In 2020 I thought about starting a nonprofit, as a place where advocates of color could feel heard and seen and have our ideas spearheaded by activists of color.

Our board of directors are all advocates of color. It’ll always be People of Color, as long as I have something to say about it. I just want Apex to be a space where advocates of color that are advocating for animal rights can be seen and heard, have their ideas embraced, share their concerns about activism and share their stories. I don’t know of too many organizations that are focusing on advocates of color doing direct action or more grassroots action in the movement.

I also wanted to make sure that I have space for these advocates to discuss the way animals are exploited and how that intersects with other issues. I think those other issues are impacting the activists themselves. When you’re an advocate of color, and you come into this space, or any advocacy space, there’s a particular type of baggage or trauma or just lived experience that you have that some whites may not have. We don’t get to separate ourselves from the trauma in our lived experience when we clock out of our activism. I can’t stop being Black once the protest is over. I wanted to make sure that in this space where Apex Advocacy exists, activists are able to address these other types of issues that correlate to the oppression of animals.

Grace: Can the animal rights movement succeed without other social justice movements?

Chris: You know, honestly, I’m not sure if any social justice movement can truly succeed without any other social justice movements. It’s something that isn’t limited to the animal rights movement, but it is a little bit more prevalent in the animal rights movement. All of our movements need each other because all of these issues intersect. The same perpetrators, the same systems, are responsible for all of our oppression whether we’re looking at the oppression of marginalized groups or animals. When that lightbulb goes off for all of the marginalized and oppressed groups, that’s when the world is going to have a revolution and change in a drastic way.

Up until then society has gotten better. Life is much better for most people in 2022 than it was for people in 1922 or 1822. We’ve seen legislation, we’ve seen progress in a lot of areas. But once we all realize that all of our oppressions are interlinked, all the movements will benefit greatly from that.

Grace: When talking to people, especially People of Color who face so much trauma and additional barriers just being alive, how do you address the idea that with so many people experiencing so much suffering, why should they care about animals?

Chris: What it comes down to is understanding that, like I said earlier, all of these oppressions are interlinked. Sometimes as oppressed groups, we forget that the psychology behind the discrimination of one group over another is what actually got us into being a society where exploitation is normalized. It’s not necessarily about not caring about or ranking one oppression over the other, it’s more so about making sure that we don’t exclude anyone from our circle of compassion. We can be just as passionate about animal advocacy as we are about women’s rights or the Earth. It’s all about making sure that we don’t limit our compassion to just one group, and see your group as the group that is most deserving of justice or equality or equity. There’s no limit to compassion; we can be compassionate about a variety of things. We don’t have to be an activist in every area. What we do have to do is, oppose all injustices. Even if we’re not going to be protesting on a regular basis, when we are confronted with injustice in other areas, we oppose it. We need to make sure that we have an equal stance against speciesism, racism, sexism, and classism. The stance should be the same against all of them, even if you are particularly focused on one.

Grace: How is the idea of intersectionality between different social justice movements and animal rights addressed in the No Backyard Slaughter campaign?

Chris: When I was an organizer for The Save Movement, the vigils that I organized were always an hour away from the metro Atlanta area because that’s where the slaughterhouses were. Late last year, I found out that there was a slaughterhouse literally 10 minutes from where I lived in someone’s backyard. They had been slaughtering animals there for years. I was surprised I hadn’t known about it despite being an organizer for one of the bigger animal rights organizations in the movement. I think that’s because in the animal rights community we should be hyper focused on animal liberation, but we should also be aware of other injustices, but often we’re not.

This slaughter has been going on for five to ten years. He kills on average right now about 100 animals a month, as indicated by the Georgia Department of Agriculture. He’s almost at 7000 animals that have been killed on record, since 2018.

What really made me feel like I had to stand up in this situation is the community that was fighting against it. They aren’t activists; they aren’t people that are specifically trained in advocating for animals in this capacity. A lot of the people organizing events and actions and having meetings with the City Council are just regular everyday neighbors and people. They were doing all of these things in their spare time. I have an organization and I was in a position to really make this a focal point of Apex. So I started to really apply pressure on the county to shut the slaughterhouse down because it not only kills animals, but it’s a sore spot for the community. People are going to sleep and waking up with sounds of animals being killed next door to them. There’s animal bodies being decomposed on this land, it’s just up the street from an elementary school. It’s just a regular neighborhood and a Black community. It impacts the property value of the community. Think about it, you can’t really sell your house for the same amount that you would normally be able to if there’s a slaughterhouse next door. Who knows what impact the decomposing bodies of animals, blood and manure soaking into the soil and entering the local water supply and sewage system has. It’s a campaign that has a lot of different angles and perspectives and touches on a variety of issues.

Grace: Black Vegan Everything represents a less traditional approach to grassroots organizing; what was the thought process behind that campaign?

Chris: That campaign is a lot more carefree and less intense. Black Vegan Everything is a platform where we showcase and display a variety of Black-owned vegan businesses across a variety of industries. The goal is to showcase the way that Black communities fully embrace veganism. A lot of times when we think about Black people and veganism, we think of food. I wanted to have this platform to show that Black people are embracing veganism in a variety of ways. This platform could help circulate Black dollars in Black communities. There are a lot of people looking for Black-owned vegan businesses. Our goal is to help promote these businesses and help to expand them so they can reach bigger audiences and also help grow a community within these business owners, so they can share resources, share information, talk about their ups and downs, and use each other as a community, benefitting from each other’s experience. That’s what we’re trying to do with Black Vegan Everything:  hold space for Black owned vegan businesses and amplify their work.

Chris: You can always support by going to Apexadvocacy.org. We are a 501c3 nonprofit, so any donations are tax deductible. You can support us through one time donations or you can support our I have a Patreon that you can subscribe to to support Apex. Another way is by letting people know about our Black Vegan Everything campaign, No Backyard Slaughter campaign and our Global Majority Caucus campaign, which we embraced after Encompass closed their doors. The caucus is essentially a space for activists of color to come and talk and have a sense of community. We have monthly meetings, monthly book club readings, we try to do in person meetings together with other activists of color whenever we can. We’re just really trying to grow the community of activists of color. So all of our resources are available to all caucus members. Support us by simply going to our website, and seeing which one of our initiatives resonate with you.

Grace: Is there anything you would like to add?

Chris:  The thing that’s coming to my mind right now is just making sure that when you’re involved in any type of advocacy that you make space for yourself, and don’t burn out and don’t have compassion fatigue. A lot of times when we advocate, it can be very heavy on our hearts, and very demanding and taxing on our spirits. A lot of times activists feel like we have to push ourselves to the limit, because the animals don’t get a break; they’re always suffering. We need to realize that we can give as much as we can, but that doesn’t mean that we also don’t allow ourselves to be human and enjoy this experience of life. Hopefully will achieve a world of collective liberation one day, and when we get to achieve collective liberation we need to be able to operate in a happy space. We don’t want to be the people that have only devoted ourselves to activism and burnt out and don’t even know how to exist as a person. Give yourself a break from advocacy or pace your activism in a manner that allows you to enjoy life and to enjoy being a human. Leave space for yourself in any type of advocacy work that you do.