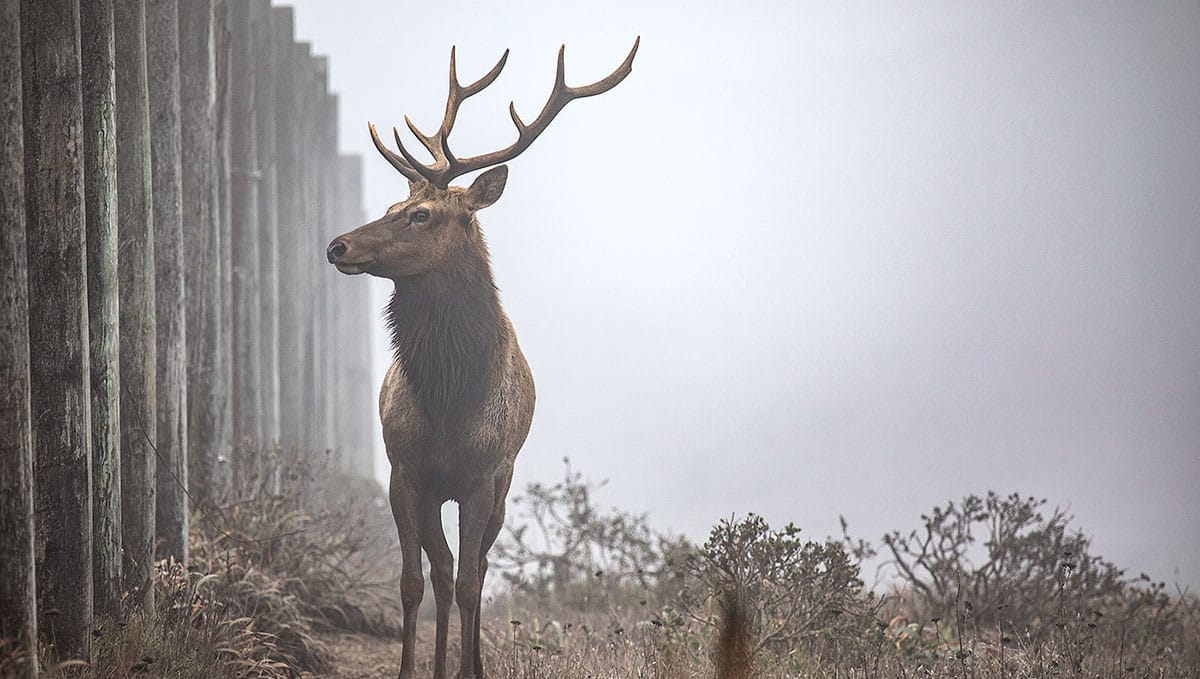 Over 25 percent of the tule elk herd held behind a fence in California’s Point Reyes National Seashore have died this summer. The loss of 72 elk, who faced slow, agonizing deaths from thirst and starvation, brings the population to its lowest since 1993. While the tule elk herd dwindles, an ongoing court battle is being fought over how the National Park Service is managing them.

On January 5, the Animal Law & Policy Clinic at Harvard Law School filed another legal brief on behalf of the tule elk, part of a lawsuit that has stretched over several months and seeks to force the Park Service to take action to save the remaining elk. A key issue is the General Management Plan for the elk of Tomales Point, which the Park Service has neglected to update for 41 years. This plan has not only failed to account for changing environmental conditions that impact the elk but also keeps the Tomales Point herd penned behind a fence at the tip of the peninsula. The fence prevents the elk from ranging beyond the 2,600-acre area of confinement to find year-round food and water sources.

According to Kate Barnekow, lead attorney on the Harvard Law lawsuit, the National Park Service announced in December their intention to revise the General Management Plan over the next three years. Tellingly, this announcement came one day before the Park Service was due to respond to the lawsuit in court. Barnekow is concerned that this is an attempt by the Park Service to avoid being told by the court to update the plan, calling it “just another move in a decades-long history to avoid taking actions that they are legally required–as well as ethically obligated–to take.”

Harvard Law’s latest brief asks the court to accelerate the Park Service’s proposed timeline to safeguard the elk’s continued survival. It also asks the court to allow further arguments on behalf of the elk, in particular, on whether the National Park Service should provide relief like adequate food and water in the interim.

“If the Park Service cannot compel itself to respond more quickly to the current needs of the tule elk, then we hope that the Court will order them to do so,” says Barnekow.

The tule elk are, in many ways, a conservation success story. A subspecies of North American elk and native only to California, the tule elk once ranged widely across Central California and numbered around 500,000. By the 1870s, they were considered extinct until a herd of around 20 individuals was discovered. Due to reintroduction efforts, around 5,700 tule elk currently live in 22 herds around California, all of whom came from this initial small group of elk.

Three of the existing herds are in Point Reyes, where their presence has caused conflict with ranchers who graze cattle on land they lease from the National Seashore. Of the elk at Point Reyes, two small herds are free-ranging, the Drakes Beach herd with 139 elk and the Limantour herd with 155. The largest herd, at Tomales Point, has been isolated behind an eight-foot-tall fence since 1980. Over the past two years, their population has drastically declined from 445 to 221, mainly due to thirst and starvation in deaths that Barnekow describes as “horrific.”

Point Reyes National Seashore is one of several national parks that permit cattle grazing and the only park with commercial dairy operations. Ranches and dairy operations occupy over 28,000 acres of park land. These operations are permitted to lease public land by the Secretary of the Interior, and the Park Service has renewed their leases in five- and ten-year increments since the early 1990s. This changed recently when in late 2021 the Park Service announced that it will grant 20-year leases to cattle ranches with the intention of diversifying agricultural operations.

Along with this news comes a plan to haze and kill elk in the free-ranging herds. Another lawsuit, filed by the Resource Renewal Institute and two other environmental organizations on January 10, 2022, challenges this plan to reduce the already small populations of native elk.

A matter of survival

For the Tomales Point elk, removing the fence that confines them may mean the difference between survival and slow, prolonged death. Over the summer, the Park Service provided several water troughs and a mineral lick for the elk–stopgap measures that do not address the effects of continued drought, nor the fact that available forage behind the fence lacks essential minerals that the elk need.

With continued die-offs, the population’s genetic diversity is at stake, a concern already raised by the National Park Service in 1998 when the herd numbered around 500. However, ranchers represent a powerful lobby that opposes removing the fence to allow the elk to search out food and water. “Without relief, tule elk will continue to suffer and die horrific deaths at alarming rates,” Barnekow says. “The situation is dire.”

Jack Gescheidt, founder of The TreeSpirit Project and tule elk campaigner for In Defense of Animals, asserts that the Park Service’s continued reluctance to intervene on behalf of the elk supports the interests of the agriculture industry and not conservation. As he points out, “the Park Service has killed half the elk at Tomales Point in just two seasons.”

Gescheidt is also a plaintiff in Harvard Law’s lawsuit, along with two other California residents and the Animal Legal Defense Fund. He has traveled to Point Reyes for years, taking photographs that convey both the unique beauty of the elk and their intense suffering. “These animals were entrusted to their care,” he says, “and the Park Service has egregiously violated that mandate.”

Gescheidt also sees the tule elk’s situation as part of a larger problem: government organizations charged with caring for and preserving wild species that instead bow to the desires of the cattle industry. The elk deaths at Tomales Point are a “microcosm for what’s going on across America and even the world,” where wildlife populations and wildlands are being destroyed to raise animals for human consumption. Gescheidt points out that the “very businesses the National Park Service and other agencies are working to protect by killing the wildlife are the ones doing the greatest harm to the park and the surrounding environment.”

With the latest legal action on behalf of the tule elk, Barnekow and the plaintiffs hope that the court will impel the Park Service to intervene quickly while there is still a population left to protect.

Endangered Elk Starve While the National Park Service Stands By