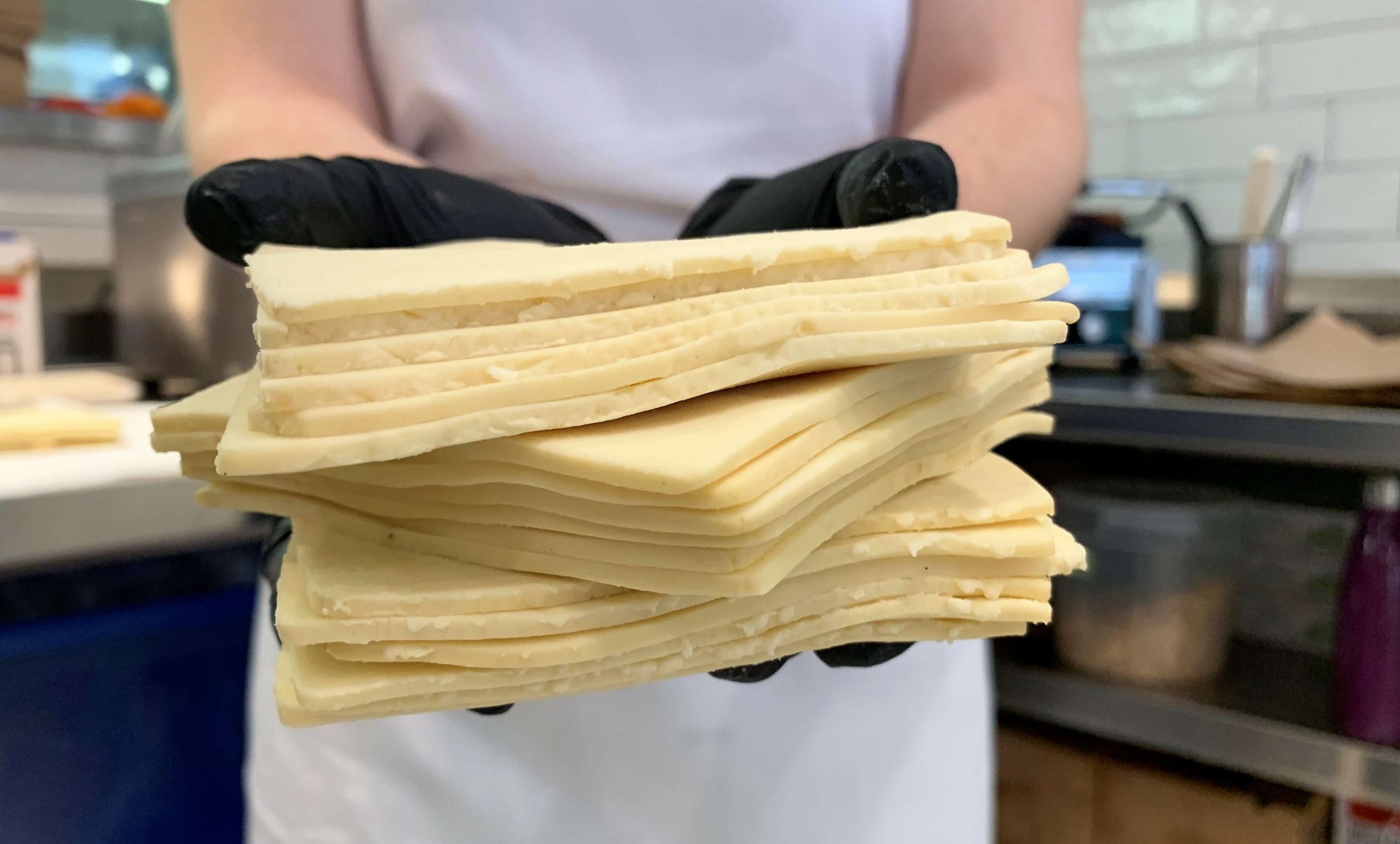 Over the past year, cell-based meat, plant-based milk, and now vegan cheese have all taken their turn under the microscope, as legislators decide whether or not these animal-free food products count as the “real thing.”

There’s a big difference between vegan cheese and non-vegan cheese. Everyone seems to understand that one is from an animal and other is not, except the select few in charge of writing the rules for how vegan cheese products appear on shelves. It’s a problem vegan food companies are all too familiar with.

But to be very clear, this is not a dispute over what is vegan and what is not. Legislators know the difference–one cheese is made from an animal that spends its days suffering at the hands of massive corporations, and the other is not. The other is vegan, which we assumed would be self-explanatory at this point.

Then what’s wrong with calling it vegan cheese? A cheese shop named La Fauxmagerie clearly isn’t trying to fool anyone… I mean, come on, it’s right there on the label. Still, clearly labeled vegan cheese shops around the world are being accused of misleading customers.

Demand for vegan cheese is growing—fast

US sales of plant-based cheese rose to $124 million at the end of June 2018. That’s a 43% increase from this time last year, making vegan cheese the fastest growing plant-based food for the second year in a row, according to the Plant Based Foods Association.

The forecast for global sales is just as bright. Variant Market Research is calling for the global vegan cheese market to grow by 7.6% over the next four year. The only vegan food industry expected to grow faster globally is plant-based meat, with the potential to grow 9% in the same time.

Vegan cheese brands are no different than the rest of the plant-based movement. They are picking up on this impressive potential for growth and going mainstream. In the UK, sales for the 100% plant-based cheese brand Violife are right up there with the top 20 cheese brands in the country. It’s the first time a vegan cheese brand has ever made the UK’s top-cheeses list, LIVEKINDLY reports.

Much like they did for plant-based meat, venture capital firms are helping push smaller vegan cheese brands into the spotlight. Kite Hill and Miyoko’s Kitchen both received new funding this year—$40 million and $9 million, respectively—to expand their operations. Canada-based Daiya Foods is one of the oldest and strongest vegan dairy brands in the world. It sold for $324 million in 2017, back when the plant-based cheese industry hovered around $104 in market value. They must be doing something right.

“Vegans and traditional consumers alike are looking for better-for-you options that aren’t only plant-based, but ’swap worth,” Michael Lynch, CEO of Daiya, told SmartBrief. “When it comes to dairy-free cheese, consumers are looking for a product that tastes just like dairy-based cheese.”

And they’ll find plenty of delicious options. That is if legislators can stay out of the way.

This is how big dairy is responding

The language of the bill seeks to amend the Federal Food, Drug, and Cosmetic Act and prohibit the sale of any food that uses the market name of a dairy product and is not the milk of a “hooved animal.”

Legislators are defending against imitation and replacement yogurt, milk, and cheese explicitly “to promote the regular intake of dairy.”

They were successful, but only partly. Backed by the National Milk Producers Federation, the DAIRY PRIDE Act made its way into the 2018 Omnibus spending package. But what actually made it into law was not nearly as scrupulous as the national milk lobby would have hoped. Congress passed directions (not legislation) for the FDA to establish standards of identity for dairy products, all of which were non-binding and had zero legal significance at the time.

The DAIRY PRIDE Act is still nothing more than a directive, but it carries a series of implications. Look at it as a litmus test for vegan cheese around the world.

Earlier this month, Dairy UK announced that it will take action against the country’s first vegan cheese shop, La Fauxmagerie.

“Dairy UK has a duty to ensure the nutritional and health benefits of real dairy are recognized by and communicated to consumers,” a spokesperson for the dairy lobby told the Telegraph. “It concerns us that consumers are being misled with the use of dairy terms like cheese by the plant-based sector.”

But the same industry-led doubt is threatening Vancouver plant-based creamery Blue Heron. This time the complaint is coming from the Canadian Food Inspection Agency, which provided this statement. “Federal cheese composition standard requires that products labeled as cheese be dairy-based.”

Every sector of the plant-based food industry is growing. Vegan products are on more shelves in more places. Often times, you can find them right next to the real thing. When plant-based consumers walk into the store to buy vegan eggs or vegan cheese, research shows that they know exactly what they’re buying. They even check twice.

If the plant-based consumer is one thing, they are conscious and intentional about the food they eat. No one is trying to trick anyone into doing anything, except big meat and dairy companies. They have a bone to pick with the competition. They’re willing to hit the plant-based food industry where it hurts to make sure people eat more meat and dairy.

Where else are labeling bills being introduced?

The plant-based movement wasn’t a fad. Big dairy and meat companies don’t think so either. If they did, they would not be trying to make it harder for vegan cheese makers to sell their products. Two of the three countries trying to corner the cheese market for real dairy cheese also happen to be two of the top ten milk producers in the world. The U.S. sits at number one, producing 23,738,000,000 gallons of milk a year. The UK comes in at number 10, producing almost 4 billion gallons of milk a year.

There’s more good news. The vegan cheese business is not suffering in Canada–at least, not yet. Ottawa welcomed a new vegan cheese maker Happy Heart Vegan Gourmet last month. Meanwhile, the USDA opened the door to UK-based cheese company Lye Cross Farms. Their Grass-Fed Organic Sharp Cheddar Cheese will be in more than 1,000 U.S. stores by the end of 2019. It’s worth noting that milk is the cheese’s primary ingredient.

“The steady growth of the plant-based foods industry shows that consumers continue to shift away from animal products towards plant-based options,” said Michele Simone, executive director of the Plant Based Foods Association.