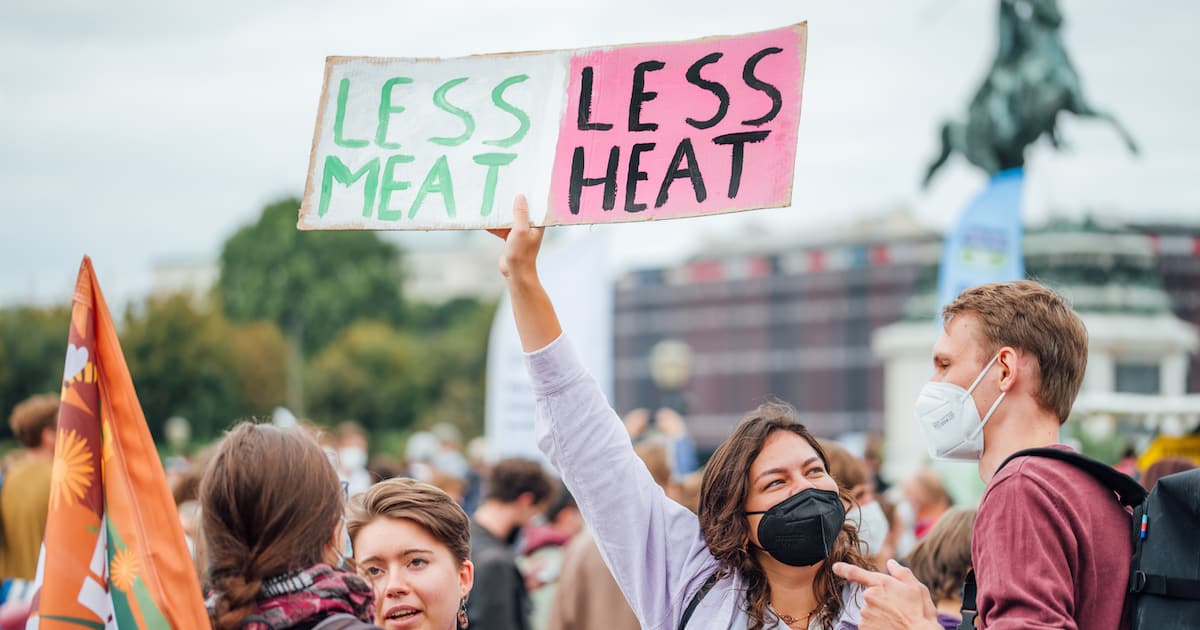 Science has spoken: Humans created the climate crisis. Researchers concluded that more than 99.9 percent of 88,125 peer-reviewed studies support that very fact. And while there is more than one polluter at play, animal agriculture factors heavily into the climate equation, so substantially that a recent study suggests that animal-based foods account for 57 percent of greenhouse gas emissions from agriculture. Plant-based foods only account for 29 percent.

But animal agriculture is not buying it. Instead of developing bonafide climate solutions, the meat, egg, and dairy industries are now promising to give their foods a facelift by making them more sustainable. Maybe they see the writing on the wall (or their newfound commitment to sustainability is just a marketing ploy). Either way, animal producers are dumping millions of dollars into unvetted climate solutions in a vain attempt to save face with climate-conscious consumers. The result? Big meat and dairy companies are betting that if they can make their products even marginally more sustainable, they will somehow eliminate the burden animal agriculture has on the environment and that we, the consumers, will buy it.

Clearly, we cannot trust the animal agriculture industry to implement effective climate solutions on its own. So, in advance of the United Nations Climate Change Conference, COP26, we compiled a list of actions that governments around the world can take to protect the planet from the disastrous impacts of animal agriculture.

This should go without saying, but meat and dairy companies have a moral responsibility to the climate and its inhabitants. By continuing to operate without emissions caps or regulations, as many of them do, they are essentially sponsoring the large-scale destruction of our planet.

While big meat and dairy companies have invested heavily in the alternative protein space in recent years, including sizable investments from Nestlé, Tyson Foods, JBS, Hormell, Cargill, Smithfield, and Unilever, to name a few, there is plenty of room for more. It is time for governments to get involved. In fact, it is long overdue: Fund new research into alternative proteins. Share that research openly and actively with others. Partner with industry leaders to bring new products to market. You did it for Big Meat and Dairy. Who’s next?

3. Enact a moratorium on factory farms

4. Understand what it means to be sustainable

It is hard to take anyone who mentions factory farming and sustainability in the same sentence seriously. But big meat and dairy companies do it all the time. Heck, so does the USDA. And they cannot even begin to understand the implications their double-speak has on the average consumer. But we can and should still demand transparency. One of the fastest and most effective ways to do that? Carbon labels. They give consumers the information they need to make an informed, climate-conscious decision and affect consumer behavior, too. A recent study found that consumers presented with carbon labeled products were more likely to buy a meat ​​substitute instead. Imagine if governments around the world made carbon labels mandatory. A pipedream? Sure, but we have to start somewhere.

World governments spend $540 billion on agriculture subsidies every year, and a large chunk of that goes to big meat and dairy companies. The United States alone spent $52 billion on farm programs in 2020, and the producers farming the healthiest foods on the planet, like fruits, vegetables, legumes, grains, nuts, and seeds, received only five to 11 percent of that money, according to the Agriculture Fairness Alliance. And during the pandemic, millions of dollars in emergency relief funding helped keep some of the most destructive meat companies in the world afloat. The obvious solution is to allocate money for food systems that improve human health and heal the planet instead of destroying it.

Although several countries have already embraced this action—Canada, for instance, kicked dairy out as a food group in its recent guidelines—this shift could be a worldwide movement. According to the Eat-LANCET report, the global consumption of fruits, vegetables, nuts, and legumes needs to double, and red meat and sugar consumption need to be reduced by more than 50 percent to meet key measures of planetary health by 2050. And while individual actions do matter, their impact would be more substantial if every high-emitting country, especially those in the Global North, modified its dietary recommendations to meet Eat-LANCET’s suggestions. For the U.S., in particular, achieving these new goals would be a challenge. It would mean adopting guidelines that are driven by science and not meat industry lobbyists.

When the German Environment Ministry knocked meat and fish off the menu of official government functions in 2017 and said that all food served had to be seasonal, produced on organic farms, and sourced from Fair Trade vendors, it was met with backlash. But doesn’t it make sense for governments to be role models for their citizens, kind of like parents eating their veggies to encourage their kids to do the same?

Denmark recently became the first country to announce a plan to fund plant-based foods, awarding substantial bonuses to farmers who grow plants for human consumption. What a novel idea, right? The program is part of its climate agreement for food and agriculture, and it could provide a roadmap for other countries to follow.

These eight actions are only the tip of the iceberg. But with each tick of the Doomsday Clock, each one becomes even more dire.