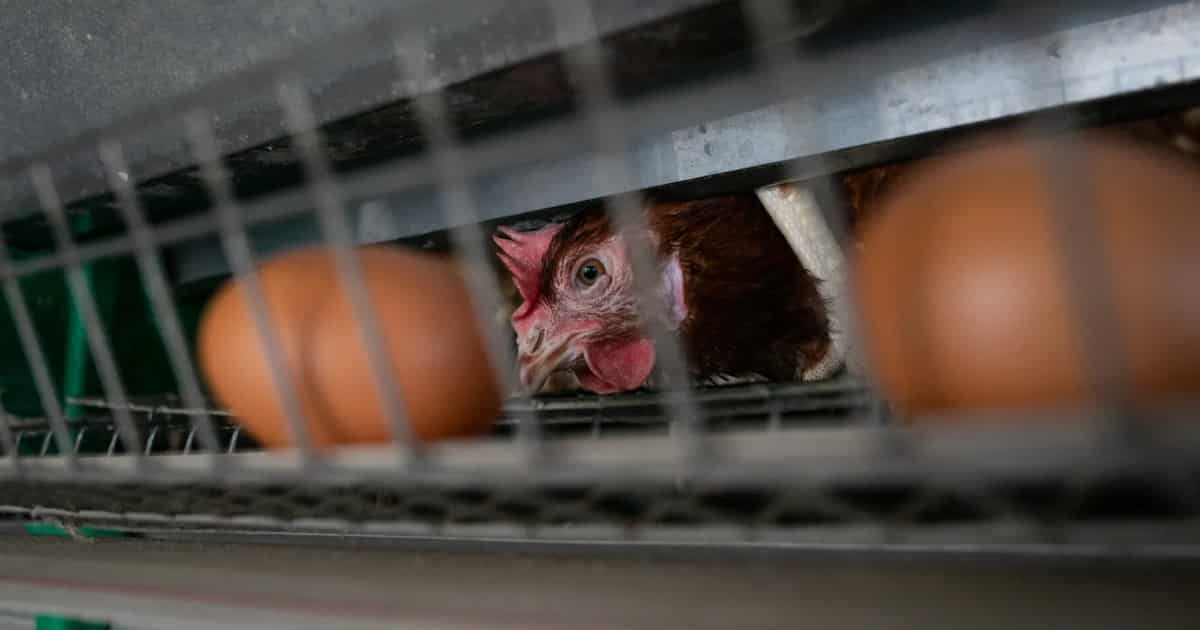 Chickens are widely considered to be unintelligent. This crude classification is perhaps assigned to chickens without much thought and may, in part, stem from our views of chickens as food animals. Chickens account for 95 percent of animals farmed for food around the world. In the United States, 99.9 percent of chickens raised for meat, known as “broiler chickens,” are intensively confined inside factory farms, according to Sentience Institute.

Scientific American calls the intelligence of chickens “startling” because “chickens are smart, and they understand their world, which raises troubling questions about how they are treated on factory farms.” Dr. Lori Marino, a neuroscientist who studies cognition, emotion, and behavior in chickens, has a unique approach to the age-old question: are chickens smart? In 2017, she told Mental Floss, “There’s not a lot of scientific work being done on chicken cognition, because if you assume an animal doesn’t have a given trait, you aren’t going to study it. But what research there has been is very, very compelling.”

What do we know about the minds of chickens? How smart are these birds, and what might they be thinking and feeling?

Chickens are inquisitive, and they notice—and relay to others—what is going on around them. Dr. Chris Evans of Macquarie University has studied communications in chickens and says, “They can signal with remarkable precision about critical events in their world, such as the appearance of a particular type of predator, or the discovery of food.”

They Can Be Manipulative

Chickens are capable of many positive social behaviors, but much like other animals and humans, they can be manipulative and deceive each other. Dr. Marino writes, “Males will sometimes make a food call in the absence of any food. This serves to attract females who, once near them, can be engaged and defended against other males (Gyger and Marler, 1988). Of course, females develop counter-strategies and eventually stop responding to males who call too often in the absence of food (Evans, 2002). These kinds of social strategies—deception and counter-strategies—are striking similar to the same kinds of complex behaviors identified in mammals, including primates.”

They Can Learn Quickly

Chickens learn very quickly, even in comparison to humans. Author of the study “The Intelligent Hen,” Dr. Christine Nicol writes that “chickens have the capacity to master skills and develop abilities that a human child can take months and years to accomplish,” including keeping track of numbers up to five, displaying object permanence similar to that in apes, and understanding concepts such as basic structural engineering.

They Can Perform Basic Arithmetic

Like some other birds and chimps among other animals, chickens can do simple arithmetic. Dr. Marino writes, “Chickens possess some understanding of numerosity and share some very basic arithmetic capacities with other animals.”

A study published in 2009 even found arithmetic abilities in newborn chicks, concluding that “in the absence of any specific training, chicks spontaneously discriminated between two and three, in both cases preferring the larger stimulus set.”

A 2005 study showed that chickens anticipate and worry about the future. They can also show self-control. The study found that when offered a small reward, chickens would wait for a larger one.

The author of the study, Dr. Siobhan Abeyesinghe noted, “An animal that can anticipate an event might benefit from cues to aid prediction but may also be capable of expectations rendering it vulnerable to thwarting, frustration and pre-emptive anxiety. The types of mental ability the animal possesses, therefore, dictate how they should best be managed and what we might be able to do to minimize psychological stress.”

They Can Show Self-Awareness

Chickens can also anticipate and worry about the future, which may be related to their self-control. Marino writes, “Self-control may also be associated with the development of self-awareness (Genty et al. 2004) and autonomy—the ability to think about and choose future outcomes.”

Do Chickens Recognize Their Owners?

Chickens can recognize up to 100 faces—and have been found to associate the faces they remember with the positive or negative experiences. Chickens can also show love and affection for the humans who care for them, and they certainly remember the humans they know and how those humans may have treated them.

Chickens, like humans and other animals, are unique and may have different preferences. But many chickens do like being petted once they are accustomed to interacting with humans. They will sometimes even purr contentedly like cats. Even in an environment such as factory farming, where chickens likely have not experienced kindness, the curious birds may enjoy interacting with someone.

In a short film, We Animals Media Founder Jo-Anne McArthur documents a chicken farm. She narrates, “I wonder how these chickens will react once they realize I mean no harm. I stop shooting, sit down, and put my camera on the ground. At first, they’re still cautious. But soon the bolder birds start to get closer. They’re curious. Soon I find myself surrounded by a sea of chickens.”

The small birds soon begin climbing onto her lap. McArthur, who has photographed chickens in both industrial farms and the safety of sanctuaries, says of one bird who sits in her hands, “This bird has never been a pet before, and she loves it, I mean chickens just love this. She’s settling down onto my hand. She’s starting to preen herself now because she likes what I’m doing so much.”

Not just members of a faceless flock, chickens are unique individuals with personalities. Dr. Marino writes, “There is an abundance of anecdotal evidence for individual personalities in chickens from sanctuaries, small farmers, and people who keep backyard chickens. And… mother hens show a range of individual maternal personality traits which appear to affect the behavior of their chicks.”

Like mothers of other species, hens are extremely protective of their young. A 2013 study found that mother hens act protectively if they feel their chicks are threatened—not only when the chicks are showing distress, but based on the mothers’ knowledge of potential threats.

The authors write, “Hens increased maternal vocalizations and walking,
and decreased preening, when they perceived their chicks to be threatened, regardless of the chicks’ reactions to the situation. Hens exhibited signs of stress-induced hyperthermia only when their perception of threat was in accordance with that of their chicks. Chick behavior was influenced by the hens’ expectations, with all chick groups
spending more time distress vocalizing and less time preening when in the environment that the hen associated with a threat.”

Chickens experience REM (rapid eye movement) sleep—and like in the case of any other animal, we cannot know what they’re dreaming about, but researchers believe that they do dream.

Chickens show empathy for one another, meaning that they can understand what another is feeling or experiencing. Researchers concluded that mother hens show signs of distress when their chicks are distressed.

Do Chickens Have Memory?

When it comes to not forgetting, we likely think of elephants, but chickens also have a remarkable memory. Researchers have found that chicks can recall objects after they are hidden from view.

How Can I Tell If My Chickens Are Happy?

Guidelines from the Farm Animal Welfare Council establish welfare standards known as the “Five Freedoms,” which are as follows:

Undercover investigations have revealed, though, that even on farms held to “high” animal welfare standards, chickens can often suffer, and some may not even survive until slaughter.

As animal welfare researcher Dr. Mary Baxter writes in The Conversation, “There are many ways of telling if a chicken is suffering. But to create truly positive environments for farmed broiler chickens, researchers must find ways of measuring their contentedness.”

So, what are signs of true happiness in chickens? Baxter writes, “Play-like behaviors in poultry were first described in the 1950s and 60s, with researchers writing detailed accounts of ‘sparring,’ ‘frolicking’ and ‘food running’ in young birds. In the following years, they were renamed as ‘aggression’ or ‘running-with-flapping.’ This is probably because of the general reluctance among scientists to attribute emotion or awareness to birds. But these behaviors fit within well-established definitions of animal play and their presence in modern broilers might just be the happiness marker we’re looking for.”

But we don’t need to look only to industry guidelines to understand the behavior of chickens. Those who have interacted with chickens, often rescued birds at sanctuaries, often notice that they purr when happy, as mentioned above.

Like humans and other animals, chickens are capable of feeling pain. A report titled “Pain Issues in Poultry,” published in Applied Animal Behavior Science states, “Receptors which respond to noxious stimulation (nociceptors) have been identified and physiologically characterized in many different parts of the body of the chicken including the beak, mouth, nose, joint capsule, and scaly skin. Stimulation of these nociceptors produces cardiovascular and behavioral changes consistent with those seen in mammals and are indicative of pain perception.”

The authors continue, “Physiological and behavioral experiments have identified the problem of acute pain following beak trimming in chicks, shackling, and feather pecking and environmental pollution. Chronic pain is a much greater welfare problem because it can last for long periods of time from weeks to months. Evidence for possible chronic pain is presented from a variety of different conditions, including beak trimming in older birds, orthopedic disease in broilers, and bone breakage in laying hens.”

Are Chickens Similar to Companion Animals?

Chickens are very similar in some ways to animals we typically think of as household companions. Like other animals, these birds are unique individuals with different personalities but are often inquisitive, playful, and affectionate.

In 2017, the Guardian asked “Are chickens really the new dogs?” as people in the UK increasingly kept the birds as pets. A similar rise was simultaneously happening in the U.S., where the L.A. Times called raising chickens “one of the fastest-growing hobbies.” Because the birds have different needs than animals more commonly thought of as “pets,” the Times also cautioned that “chickens often suffer because people don’t know what they are doing.”

Are Chickens More Intelligent Than Dogs?

Chicken intelligence rivals that of dogs, the remarkably smart animals we celebrate as a best friend to humans—but these birds are also more intelligent than a human toddler.

A Better World for Chickens

The evidence that chickens are intelligent and capable of feeling pain and suffering is overwhelming. Yet, because we farm and kill chickens by the billions every year, there may still be a disconnect in our ability to see these animals as sentient. Dr. Lori Marino believes that to understand chickens’ intellect, we need to start studying them from a different viewpoint.

She told Mental Floss, “Most of the work that’s done on chickens, fish, and cows tends to involve trying to figure out how to make them lay more eggs or grow faster or not peck each other. It’s all very applied, and it misses the whole point. These are animals who have an evolutionary and adaptive history just like a chimpanzee or a dog or a human being. They’re animals. And at the very least, we need to approach them as animals in their own right.”