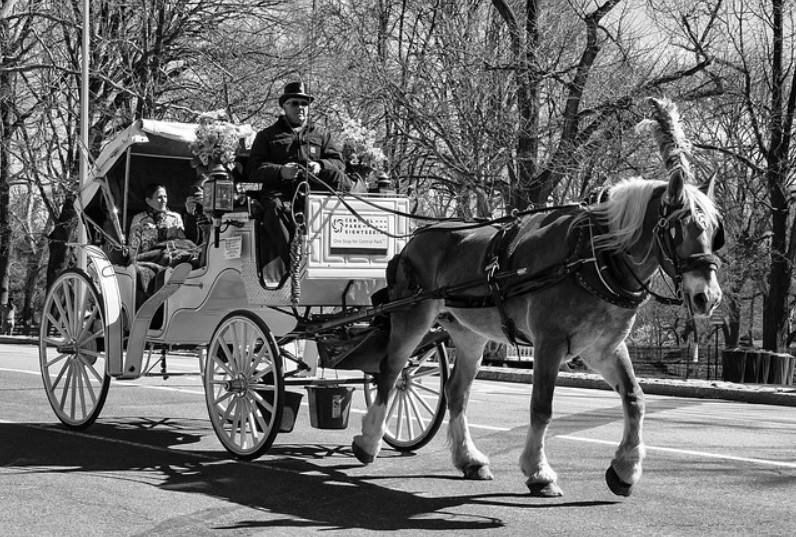 This Is How the Fast Food Industry Treats Chickens

Earlier this year, New York City Mayor, Bill de Blasio, enacted commonsense restrictions on horse-drawn carriages. The carriages are now required to stop picking up passengers on the bustling streets of Midtown Manhattan. The carriages now have three designated boarding areas in Central Park, along Fifth Ave., Sixth Ave., and Seventh Ave., and cannot be driven below 34th Street, which has been a restriction since 2010.

Since its founding in 2006, the Coalition to Ban Horse-Drawn Carriages has supported a ban on the industry, and not more “regulations because they do not work.” The co-founder and president of the Coalition to Ban Horse-Drawn Carriages, Elizabeth Forel has been involved with this issue since the 1990s and believes that the moving of the designated boarding areas is a failure because the Seventh Ave. boarding area is on an incline, which is bad for the horses, and there is no shade.

Carriage drivers and the horse owners are infuriated by the new rules because it requires them to take longer routes in the mornings, which cuts into their profits. And the New York Carriage Association has threatened to fight these changes in court.

The problem with horse-drawn carriages comes down to three main welfare concerns: the horses’ working conditions, their resting quarters, and their retirement (or lack thereof). Many horses have collapsed from exhaustion while pulling carriages. Other horses spook near traffic and die because of the stress caused by this unnatural work environment.

The horses’ working conditions are rough – and they work nine hours a day, seven days a week, 47 weeks a year. This translates into only 35 days off every year. And their rest days are spent in pathetically small stalls, since they aren’t allowed time in a pasture, which is detrimental to the horses’ physical health and emotional well-being.

When the horses are not confined to standing in their stalls, they are most often pulling a carriage with one or more occupants. The unrelenting streets of the concrete jungle are physically strenuous on the horses’ feet and joints, including their ankles and legs, even with metal horseshoes and rubber booties.

From 2005 and 2015, 581 horses have cycled through the NYC carriage industry. Unfortunately, we do not get to know what happens to the horses once they are no longer pulling carriages, but the answer is likely grim. Most will be sold to auction and eventually sent to slaughterhouses in Mexico or Canada. Owners are not required to guarantee any period of retirement for the horses who can begin working at five years old and can continue working for another 20 years of their life.

NYC is famously a vivacious, busy city, and its bustle brings constant noise pollution—sirens and honking vehicles—that negatively impact the horses’ stress levels and overall well-being. The horses’ lives are centered around providing physical labor for others because it creates a profit for their owners. Since the horses are not human pedicab drivers, they cannot agree or give consent to spend the majority of their days’ pulling carriages. While some worry about killing the minor Manhattan industry, I worry about the horses exploited and killed as a result of the continuation of this industry.

NYC Mayor Bill de Blasio originally promised in 2013 to ban horse-drawn carriages on his first day in office, but every initiative the mayor introduced prior to the recent restrictions died in the City Council because of intense opposition from the horses’ owners, the industry’s workers, and their allies.

The owners of the horses are often referred to as the “Entitled 68,” and consider carriage workers as independent contractors with no job benefits. The union for carriage drivers is weak, charging  $60 a month in dues, and members receive no benefits like health care, vacation, or sick days.

While about 200 workers currently depend on this job for their livelihood, City Council member Daniel Dromm, in 2014, introduced an initiative that would provide free specialized job training for workers and owners after banning carriages. The same bill that passed in 2017 did not ban horse-drawn carriages and recently went into effect partly with the new rule that sets up four designated boarding areas around Central Park.

The workforce composing the horse-drawn carriage industry in the city is relatively small in terms of human capital, but it has a remarkably large impact on the horses and their quality of life. According to Forel, who has access to NYC Department of Health data, as of September 2018, there are 191 horses registered to work in New York City, with 17 renewals pending. The horse-drawn carriage industry consumes the lives, or the totality of their existence, of the working horses.

If their owners would only allow it, these majestic creatures could live out the rest of their days at one of the numerous horse sanctuaries in the tri-state area happy to give them a loving home. To find homes for the horses, the Global Federation of Animal Sanctuaries would need to be contacted.

These horses deserve an early retirement, and, going forward, the city should stop giving out more licenses to exploit them.