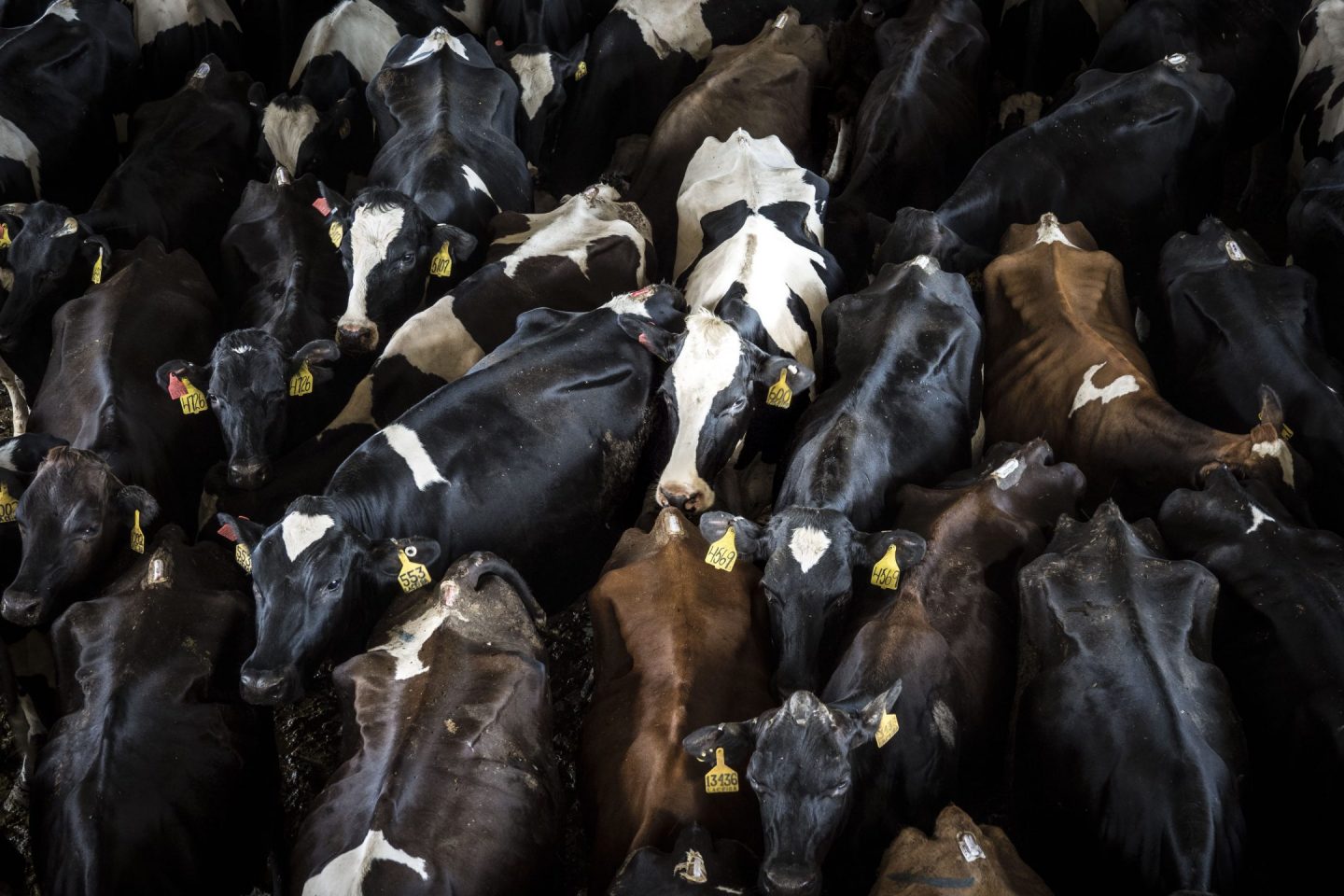 The dairy industry is having a hard time keeping up with the welfare of its animals, according to a new post from industry outlet Dairy Herd Management.

In the post titled “Animal Welfare Demands Will Keep Coming,” Nigel Cook, a veterinarian and animal welfare specialist, accuses animal welfare activists of attacking food companies by linking them to cases of animal abuse. He writes off the documented abuse and calls for food companies to protect their brands.

The agenda of animal activists is simple. Animal welfare policy should focus on animals, not preserving corporate interests.

Activists take every chance they get to respond to publishers that outright support the dairy industry, especially when the headline is directed back at them. We’ve included a point-by-point response to what the dairy industry is calling its biggest problems with animal welfare in the next five years.

Dairy companies claim to be working towards animal welfare. But the solution to their systemic animal welfare problem will only come with the rearrangement of corporate priorities and ultimately, the end of animal farming. Why? Because this is how farmers treat dairy cows.

Dairy Herd: “Criteria for immediate euthanasia. Welfare programs will push for an earlier decision on when to euthanize, such as when cattle that are unable to maintain an upright sitting position, where they are bleeding uncontrollably, or have suffered a catastrophic injury, such as a broken limb.”

Dairy cows can’t stand upright because they spend their lives in stalls. Like any living being, cows need to move to stay healthy and move more when they’re consuming as much food as they do. But the opposite happens.

With their heads stuck through metal stocks, dairy cows cannot move forward or backward. Farmers force cows to stand on concrete floors for hours on end, and eventually, their bodies can’t take it anymore. They fall and break limbs.

Standing immobile on concrete is unnatural and puts excessive stress on dairy cow’s joints. Cow hooves and joints are not fit to stand on concrete all day. Nonetheless, dairy farms are built with concrete floors for easy cleanup.

Cows develop sores, fall down, and can’t get back up. But a life filled with such extreme suffering is not worth continuing. If the prognosis is indeed poor and the cow cannot stand anymore, early euthanasia is favorable. Every year, some 375,000 dairy cows fall and can’t get back up–in the U.S. alone. 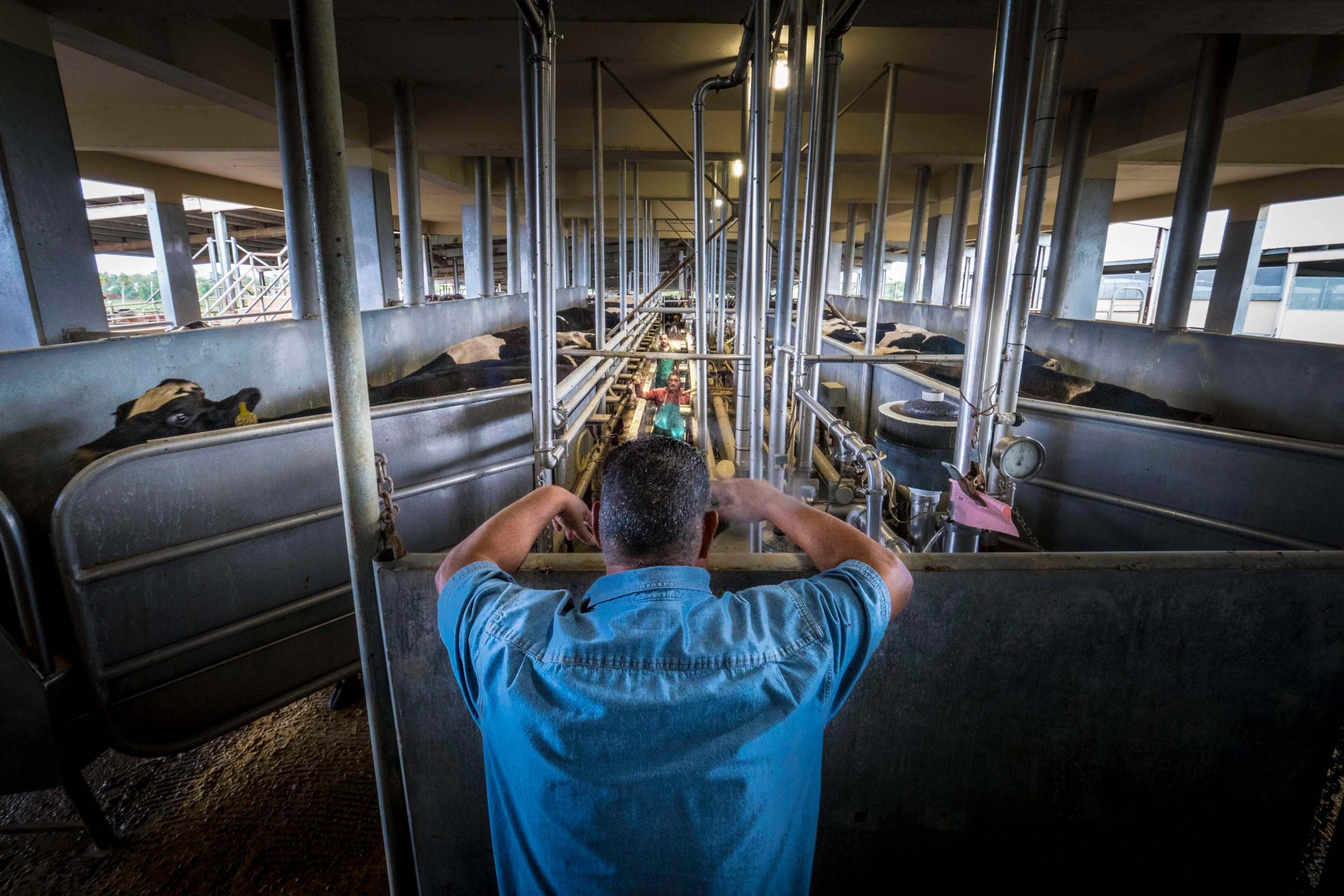 According to Temple Grandin, Professor of Animal Sciences at Colorado State University, almost 90% of downed cattle cases are preventable.

Too many cows are euthanized only after they become physically unfit to walk. The problem, Grandin says, starts with dairy cow breeders who select traits for higher milk production at the expense of foot and limb strength, which comes at the cost of dairy cows and only dairy cows.

Bleeding ulcers develop in the gastrointestinal tract of dairy cows, especially on factory farms. Ulcers are most common in high-producing, mature dairy cows within six weeks of giving birth. The cow slowly bleeds out from inside its stomach. When ulcers rupture, cows often die due to a septic infection.

“Continuous improvement in lameness scores. The FARM program currently allows for 5% of cows to be severely lame, while the standard for Dean Foods Dairy Well program is just 1%. “It is likely these thresholds will continue to strive toward zero for severe lameness—animals that are barely able to walk,” says Cook. “These represent a failure to prevent and a failure to treat promptly.”

Severe lameness from hoof infections. Most lameness occurs within the first 100 days after giving birth. An infection, caused by confinement on concrete, starts in the tender indent in the middle of the two toe-like parts for the hoof. More often than not, hooves are infected by their own feces or the feces of another animal.

There is no standard treatment for a lame dairy cow. One option is to dig out and drain the infection, with or without anti-inflammatory medication to help the animal with the excruciating pain. The other option for “treatment” is to kill the cow.

Chronic hoof infections can result in the gnarled disfiguration of the cow’s hoof. The longer a cow stands on a lame hoof, the most likely the cow is to develop other problems with lameness, like sole ulcers or abscesses. Both are extremely painful for a cow forced to be on her feet all day.

About 90% of dairy cow lameness is a result of hoof infection. Their symptoms include depressed appetite, weight loss, and something called abomasal displacement, which is when one of the cow’s stomachs fills with gas and rises to the top of the abdomen. This often happens because pain is suppressing the cow’s appetite. The cow’s stomach does not have enough muscle to digest its contents and instead fills with gas.

“Hock injuries. Globally, herds have 50% of their cows with hair loss on hocks due to friction—rubs on uncomfortable surfaces. Deep bedding goes a long way in reducing these problems. “This will drive the move away from mat and mattress surfaces already seen in the Midwest, where 70% of herds have adopted deep, loose bedding,” Cook says.”

Dairy cows don’t have enough room to lay down. The recommended space for a cow to lay down is about 100 square feet, about the size of a walk-in closet. The reality of factory farming is that dairy cows on factory farms do not get the “recommended” amount of space, which varies from 6.5 feet in length to 8.5 feet long and about 3.5 feet in width to less than 4.5 feet wide depending on the size of the cow (900-1700 pounds). 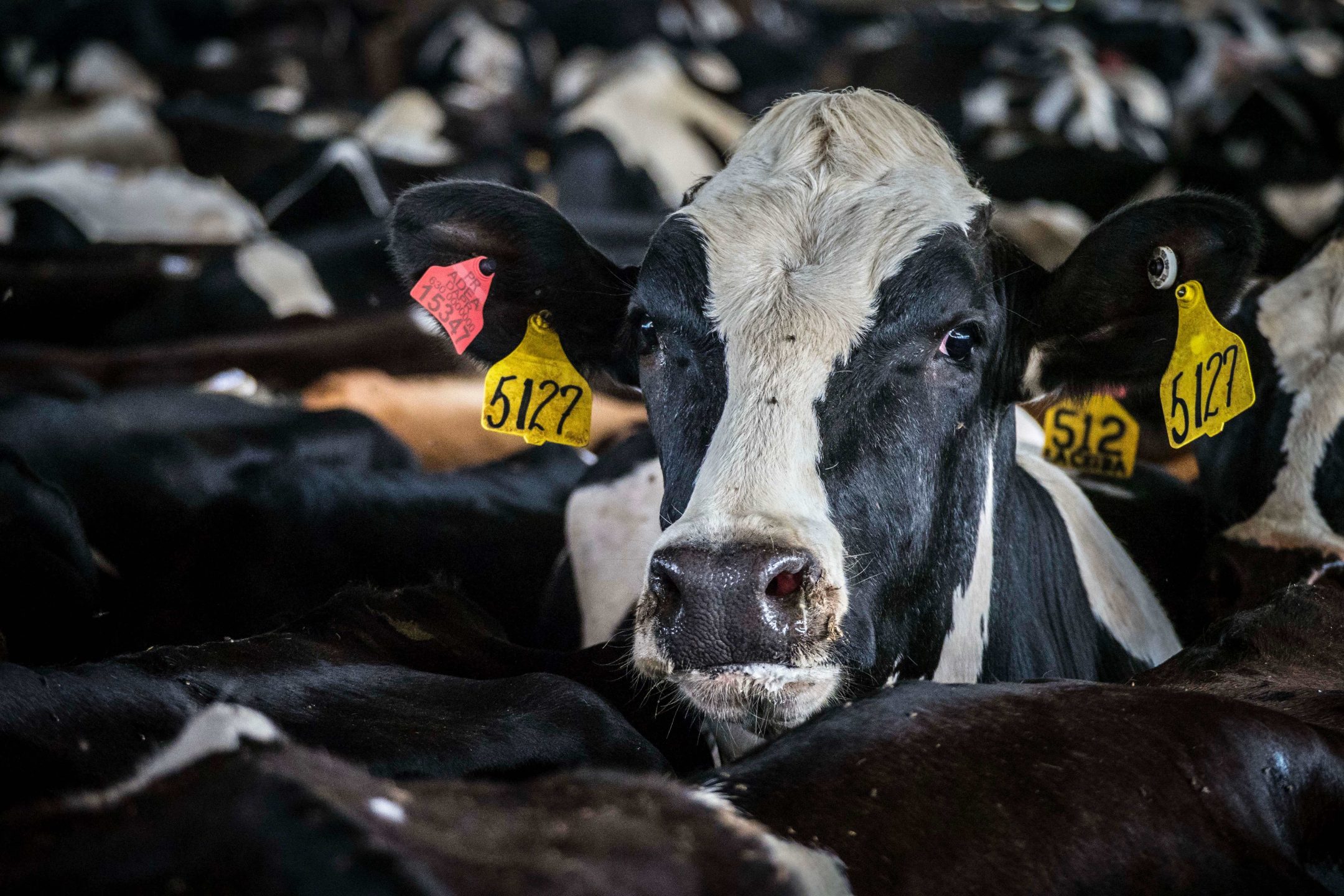 Deep, loose bedding cushions the stall base and prevents this from happening. But if farmers do not change stall bedding regularly, it becomes damp and clumps together. This exposes the base and the cow rubs against it. Rubbing causes abrasions on the cow’s hock and are at high risk of infection. This leads to a higher risk of lameness and it still doesn’t address the issue at hand. Dairy cows don’t have enough space.

“Skeletal injuries. Future audits will likely begin recording knee, neck and back injuries and broken tails. “Often, these problems have herd specific issues that need to be addressed, such as low feed rails or poor stall design,” he says.”

Long-term skeletal injuries from spending entire lives on industrial farms. With proper bedding, cows spend equal amounts of time laying on either side, but discomforts felt during pregnancy can change that. The admission that the problems are “herd specific” goes to demonstrate how poorly the industry is regulated and enforced.

By far the greatest cause of discomfort for dairy cows is improper handling. Dairy cows are regularly poked and prodded during herding (see for yourself). When farmers rush cows or otherwise handle them improperly, this causes stress for the cows. Under stress, cows are more prone to injuries like running into a railing on the side of their stall.

“Tie stalls will also come under greater scrutiny because they restrict animal movement and a cow’s ability to groom herself. Cows should be given access to outside areas for 2 to 6 hours of untethered exercise, says Cook.”

Restricted movement. Dairy cows allowed to roam for any amount of time throughout the day have a higher quality of life than cows that stay tied to their stalls. But up to 13% of U.S. dairies don’t allow any outdoor access to their animals—all 900,000 of them.

Dairy cows are prohibited from socializing with other cows in the herd or grooming themselves. Both of these highly social activities are essential to the health and wellbeing of the animal and impossible when tethered to a stall.

Because farmer tie cows by the neck to the stall, they further restrict every movement the cow makes in the narrow stall. They fall harder and struggle to get back up. Rates of lameness are higher for dairy cows in tie stalls. 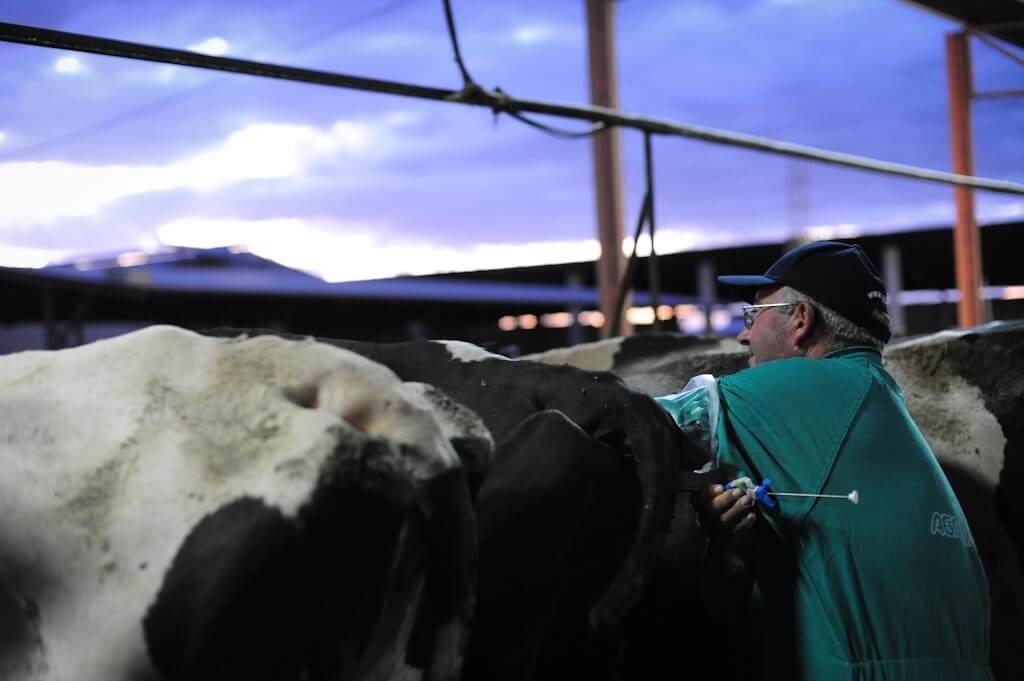 The herd size at free stall farms, where cows are let out of their stalls and into a pasture at least once a day, ranges from 20 to 244 cows. But even on the best dairy farms, farmers forcibly impregnate cows. This happens in cycles of three pregnancy, birthing, and lactation periods before a short break (3-4 months). Then farmers impregnate them again. This takes a toll on their life expectancy.

The lifespan of an unfarmed female cow is over 20 years. Most dairy cows, on the other hand, don’t see if past their 5th birthday.

“Cow-calf separation at birth. “Separating calves from cows immediately after calving does not sit well with consumers,” says Cook. That may create some disease control issues, particularly for Johne’s disease and Salmonella Dublin infections. But some companies are already urging their farms to find ways to keep calves with their dams for more than 24 hours, he says.”

Calves are separated from their mothers hours after birth. The Dairy Herd post goes on to point out that, “Some dairy companies are urging farmers to finds ways to keep newborn calves with their dams for more than 24 hours.”

Intriguingly, the author seems to indicate that “consumers,” not the readers of Dairy Herd, care about whether a mother gets more than 24 hours with their newborn. Cows, like all mammals, have evolved very strong emotional bonds to their offspring (and the offspring to their parents, naturally). So, it’s safe to assume that the emotional trauma of removing a newborn from a mother is comparable across mammals. That includes humans, of course.

Calves are separated from their mothers specifically so the bonding cannot develop. Dairy farmers believe this separation minimizes the distress of calf-cow separation later in life. But with broader, evolutionary context, it is much likelier that the bond is at its strongest when the newborn is at its most defenseless–not later in life.

Male calves are sent to slaughter. Young female calves become heifers until farmers forcibly impregnate them–and the process starts all over again. In the same videos called out in the Dairy Herd post, mother cows can be heard bellowing for their children.

Separating dairy cows from their calves shows how committed the dairy industry is to milk production. Further, it shows how uncommitted producers are to animal welfare. Of course it doesn’t sit well with customers. But that shouldn’t be the only reason Dairy Herd readers should feel uneasy.

Animal welfare policy should prioritize animals. It should keep mothers with their children. Instead, dairy farmers deprive cows of a natural life so they can, essentially, steal their milk and sell it in the morning.