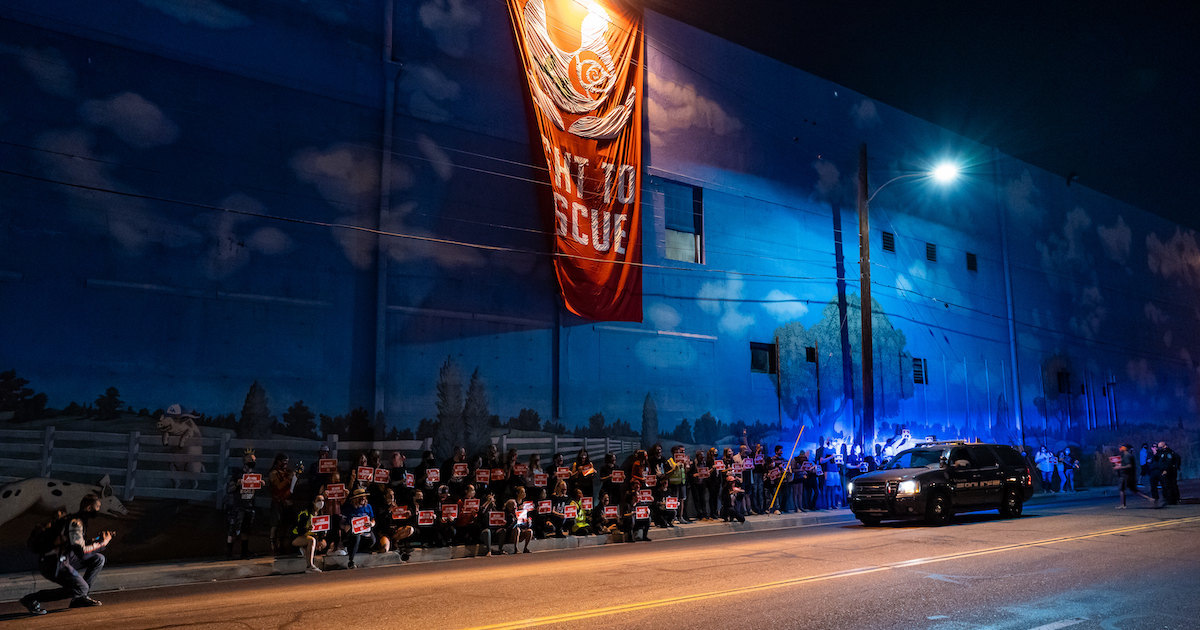 At its best, Hollywood acts as a harbinger of social change. Visionary directors seek to anticipate the future and, in so doing, introduce their audience to ideas previously beyond the public’s imagination. This dynamic played out a few weeks ago in L.A., where animal rights activists brought Okja—a 2017 film by Academy Award winner Bong Joon-ho—to life.

In Okja, activists attempt and at first fail to rescue a pig, Okja, from the grip of a malevolent multinational corporation. The film draws inspiration from the hundreds of daring Open Rescues that have successfully rescued individuals from slaughter around the world. But the activists in Okja take it to a whole new level, attempting to save a fully grown pig from a slaughterhouse.

Then, in the early hours of September 25, 2020, mere minutes from Hollywood at the Farmer John slaughterhouse, Okja’s story unraveled in real life. A team of activists, myself included, donned the uniforms of slaughterhouse workers and entered the facilities, owned by Chinese multinational corporation Smithfield Foods, to rescue a 300-pound baby pig. We entered the premises in the dead of night and were met by thousands of baby pigs who would soon be forced into gas chambers. The acrid stench of blood penetrating my mask brought tears to my eyes. We saw a scared and isolated pig—who we named Greta—and moved quickly to load her onto a custom-made stretcher and ferry her to an animal sanctuary.

Although we came excruciatingly close, seven of us were instead intercepted and arrested by police before we could rescue Greta. Despite this failure, the action was still historic. Outside of Hollywood, a rescue of this magnitude had never been attempted. And while rescuing a lamb or a duck is one thing, rescuing a 300-pound pig is another. We didn’t just attempt to save Greta from an isolated factory farm in the countryside. We infiltrated the largest slaughterhouse in the Western United States, a veritable urban fortress.

On September 27th, two days after we were forced to leave Greta behind, upwards of 200 activists gathered around the Farmer John slaughterhouse to hold a 48-hour vigil for the pigs still inside. Smithfield responded to our presence by canceling deliveries of live pigs that night. Our ability to delay the deaths of upwards of 8,000 pigs was demonstrative of our power, but the harsh reality is that ultimately no lives were saved. Their suffering was simply prolonged a day.

Following this empty success, we returned the next night determined to save a life. In the midst of dozens of armed security guards, one team of activists managed to slip by and enter the blood-soaked facility once again, where we peacefully used a chain and locks to block the gas chamber and prevent any killings. A second team locked down the gates outside, preventing three semis filled with hundreds of pigs from entering. This night, our demand was both simple and reasonable: honor Greta by releasing one pig—just one pig—to live out their life in a sanctuary, and every activist would immediately unchain and leave peacefully.

Smithfield refused. Instead, their private security violently accosted activists sitting peacefully inside, sending one woman to the hospital. And if that wasn’t enough, Smithfield pressured the police to further arrest the team of activists sitting outside on a public sidewalk, ultimately sending myself and 25 others to jail.

As nonviolent activists, we do not wish to go to jail, especially during a pandemic. And we most certainly do not wish to be sent to the hospital. That said, we are ready and willing to do so if that is what ending animal slaughter will take.

But it doesn’t have to be like this. Just as Governor Newsom used his executive power to place a moratorium on killing imprisoned humans, so too could he move California towards becoming a slaughter-free state by placing a moratorium on the construction of new slaughterhouses and factory farms. Importantly, 68 percent of Californians already support his doing so.

Although Hollywood activists initially fail to rescue Okja, the movie concludes with her successful liberation. You can help bring this vision to life and prevent the needless suffering of pigs just like Greta by adding your name in support of a moratorium on new factory farms and slaughterhouses.