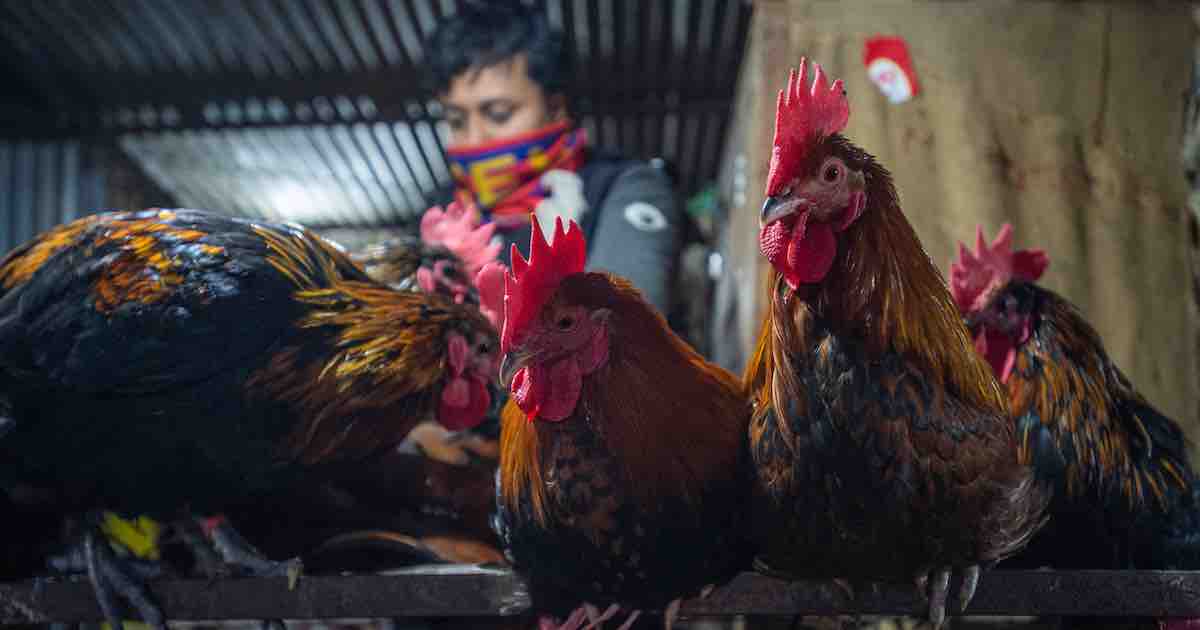 Many Americans are quick to blame the pandemic on China’s eating habits while ignoring the issues with their own food system. Even as COVID-19 ravaged slaughterhouse workers and health officials scrambled for answers, hundreds of other disease-prone facilities were overlooked.

Major metropolitan areas are housing many of the very same live animal markets found predominantly in Asia and heavily criticized for their role in the spread of COVID-19. In fact, one of the epicenters of the COVID-19 pandemic, New York City, is home to over 80 live animal markets. Other cities, such as Philadelphia, Newark, Bloomfield, Cleveland, Chicago, Alexandria, San Antonio, Los Angeles, Oakland, and San Francisco also house live markets.

Live markets in America slaughter traditionally farmed animals such as chickens, ducks, turkeys, quails, pigeons, rabbits, goats, lambs, and calves as opposed to wild or exotic animals. However, the conditions and procedures in many U.S. live animal markets reflect those practiced in places that do slaughter and sell wild animals like the live animal market in Wuhan, China, where experts believe COVID-19 may have originated. Live markets in the U.S. foster many of the same public health threats, leading activists to question the role these markets play in their communities.

Activists from Slaughter Free NYC are driving awareness around this public health risk, documenting conditions in live markets throughout New York City. Investigative photos and videos show the gruesome, hazardous environments in which animals are forced to live. In some cases, investigators found deceased and sickly animals held in close proximity to live animals. They also found animals confined and covered in each other’s urine and feces, and employees were seen working without gloves or face coverings. Outside live markets, the city streets were found covered in blood and waste.

Bronx resident and activist Chasity Alicea said she recently noticed a live market opening next to a playground in her neighborhood. “It has the potential to spread disease if people happen to walk past the slaughterhouse and get feces on their shoes, then bring that into the park,” she said. “Kids will be running around spreading whatever they have on their shoes all over the playground and potentially put their hands on that then touch their face. It’s just a lot of variables that can lead to a disaster.”

According to an NYS Department of Agriculture & Markets inspection conducted in 2018, one of the chickens in a Bronx live market called One-Stop Live Market tested positive for H2N2, also known as avian influenza.

“These lab results are disturbing, but not surprising,” said James Desmond, DVM, MS, an American veterinarian and infectious disease researcher. “Wet markets that sell live animals house different species in close proximity to each other and to humans. If different strains of influenza in any of these species combine to create a new flu strain, then a more lethal outbreak could occur, similar to the H2N2 pandemic of 1957.”

Sentient Media also spoke with a representative from the NYS Agriculture & Markets Compliance Unit who confirmed that live animal markets operating in violation of current regulations may be subject to warning letters, penalties, and hearings. If the facility is repeatedly found in violation of these regulations, a judge can order it to be shut down temporarily or, in extreme cases, permanently.

One-Stop Live Market remained open despite the detection of H2N2. The market was given 30 days to resolve the issues raised by the initial inspection and take the necessary steps to ensure H2N2 would not be detected again. A second inspection determined the viral threat was no longer relevant. The facility was never fined, ordered to appear in court, or shut down. One-Stop Live Market is still open today, along with more than 80 live animal markets operating across New York State during a global pandemic.

By now it’s no secret, the use of animals for food poses an enormous health risk. The most influential pandemics within the last 40 years were zoonotic in origin, including the human immunodeficiency virus, severe acute respiratory syndrome, avian influenza, swine influenza, Ebola virus, and Zika virus.

Officials in both Los Angeles and New York City have proposed legislation to enhance regulations surrounding local live market operations due to COVID-19. In August, California State Senator Henry Stern introduced SB 1175, calling for a ban on wild animal imports due to the risk of zoonotic disease transmission. The bill later died in the Senate.

Later that month, Gov. Andrew Cuomo extended a moratorium on live poultry markets and slaughterhouses in New York City. The new bill “prohibits the city from issuing new licenses to operate such facilities within 1,500 feet of residential buildings for the next four years.”

New York State Senator Luis Sepulveda also proposed a temporary ban on existing live animal markets. Sepulveda’s proposal includes a task force “composed of experts in epidemiology, veterinary science, and animal welfare to determine whether any amount of regulation can make the slaughterhouses safe enough to operate,” according to the Senator. While the task force reviews their findings and determines the best course of action, live animal markets and local slaughterhouses would be temporarily closed.

“There are concerns with this legislation within members of our communities—in my district and across NYC,” said Sepulveda. “Many are regular consumers at these live animal markets because of traditional cultural practices. Members have also expressed some concerns with religious traditions, and have brought up enacting a religious exemption.”

He also said that it is important to recognize the availability of religious animal products in conventional grocery stores, noting that they are available, but increasing their accessibility could address some consumers’ worries.

“Our goal is to establish regulations, accountability, and oversight over an industry that currently has none,” said Sepulveda.