Over the past year, the USDA’s Food Safety and Inspection Service (FSIS) claims to have modernized its approach to poultry slaughter inspection. But for food producers, modernization sound more like a welcome distraction. After 390 facilities tested positive for hazardous levels of Salmonella, the FSIS will do almost nothing to intervene on the slaughterhouse floor, aside from collecting more positive tests.

Federal food safety inspectors are waiving the white flag. According to the FSIS policy, if test results indicate a loss of quality control, the slaughterhouses themselves are responsible for fixing the problem. So, the same 390 slaughterhouses that just failed the FSIS’s Salmonella performance standards will now take independent action to investigate and correct the cause of a potential outbreak.

No meat is safe. Every time a chicken or turkey is processed, regardless of whether or not the slaughterhouse fails performance standards, meat companies take a calculated risk.

They rely on consumers to cook the meat correctly, killing any bacteria that made its way from factory farms into slaughterhouses and onto dinner plates. When contaminated meat is not cooked all the way through, people get sick and die. 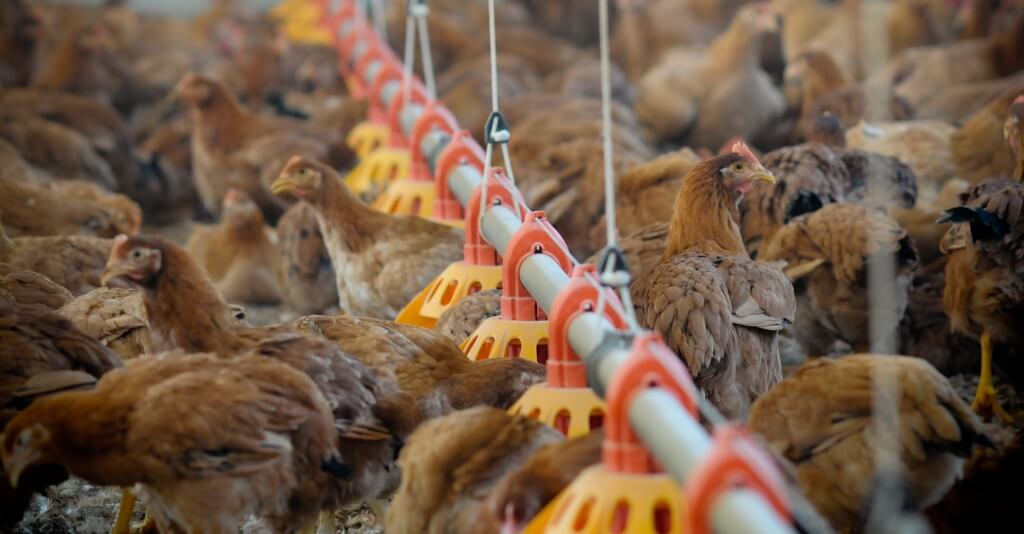 On average, the minimum sample size for the FSIS inspection was just over 10 birds. That means at least one in 10 dead birds will leave the worst facilities contaminated with Salmonella. In the case of comminuted, or “raw” chicken, one in four birds were contaminated.

Salmonella is prevalent in raw poultry and meat. To stave off the worst of the multidrug-resistant bacteria, slaughterhouses wash bird carcasses with chemicals. But carcass washes, dips, drenches, and brushes, as recommended by the FSIS, are clearly not enough. Heat is.

Heat kills Salmonella–at 160°F. If the meat is cooked properly, there should be no problem. That’s why you hear about so much contaminated meat being pulled off the shelves at grocery stores. Meat companies rely heavily on the food safety warnings found in fine print on back of meat packaging. They know the meat’s potentially contaminated. They’re just willing to take the risk, or pass it down the line.

This plays right into the hands of big meat companies

Because the FSIS passes responsibility for food safety down the line to meat companies, meat companies follow suit. They adopt their own food safety standards. Then they leave it to the consumer to squint at food labels and cook their chicken correctly.

Now, play that same logic in reserve. Consumers trusts meat companies to sell uncontaminated meat. Meat companies adopt food safety standards, which they communicate to the FSIS. Then when nearly half of slaughterhouses fail FSIS inspections, consumers don’t know where to look.

And therein lies the problem. Neither meat companies nor the FSIS wants to be solely responsible for a problem as large as Salmonella in the United States.

But this year, another 274 processing facilities surpassed 50% or more of the instances of Salmonella needed to fail the inspection. That brings the running total of failing and near-failing slaughterhouses to 664, none of which will be shut down. Instead, FSIS inspectors conduct a Public Health Risk Evaluation, which may lead to a Food Safety Assessment and more frequent sampling at failing facilities.

All the while, the slaughterhouse line keeps moving.

No meat is safe, according to the national Salmonella prevention guidelines, so individual processing facilities prescribe food safety procedures to ensure meat leaves the building uncontaminated. Once these procedures are in place, it’s up to the FSIS to monitor their effectiveness.

For all the TSA has done for travelers, they could teach the FSIS a thing or two about the No Fly List. Even if a pre-checked slaughterhouse fails to meet Salmonella performance standards, the slaughterhouse can continue to operate at its own discretion. 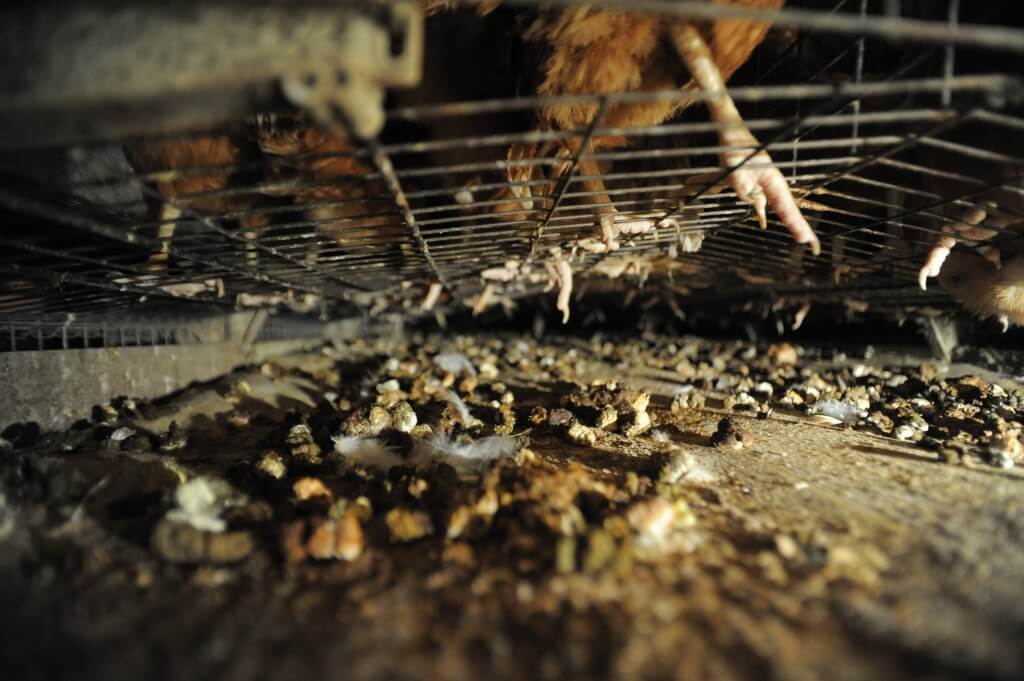 Yes, you read that correctly. The worst facilities–many of which reported instances of Salmonella upwards of 25%–are processing chicken and turkey today. One in four pieces of meat leave contaminated.

In late 2013, two years after the Center for Disease Control reported 19 Salmonella outbreaks across the U.S., the FSIS announced a new Salmonella Action Plan.

But testing positive for Salmonella is only part of the problem. Because the FSIS defers responsibility to processing facilities, there is no way to enforce a food safety standard that will limit the amount of contaminated meat that makes it to market.

Slaughterhouses inspected by the FSIS processed at least 20,000 chickens in the past year (or 1,000 pounds of meat per day).

When asked to comment, an official from the FSIS said that historically, Salmonella protection is getting better. That’s true, for the FSIS.

In 2011, Cargill recalled 36 million pounds of contaminated ground beef. This year, Cargill’s name only appears once on the FSIS’s list of the worst offenders. The FSIS’s Salmonella protection might be getting better–but Salmonella, the multidrug-resistant bacteria, is getting worse.

Over the past two months, JBS Tolleson, a subsidiary of the world’s largest meat company, recalled 12 million pounds of contaminated ground beef.

A week prior to the release of the USDA report, Jennie-O Turkey Store Sales, a subsidiary of Hormel Foods, recalled nearly 150,000 pounds of contaminated meat.

Since November 5, 164 people have contracted Salmonella Reading from raw turkey products in 35 states. So far, 63 people have been hospitalized and one person has died.

In mid-November, state and federal agencies, including the CDC, FSIS, and Arizona Department of Health Services, matched a strain of Salmonella Reading from an unopened package of Jennie-O ground turkey to the outbreak strain.

According to the FSIS, this does not definitively link the outbreak to Jennie-O ground turkey. Patients from the 164-case Salmonella cluster reported eating different types and brand of turkey. They purchased turkey products from different stores and handled raw turkey in both human and pet food. Many also came in contact with live turkeys.

CDC: Salmonella “could be widespread in the turkey industry”

Hormel said the company will continue to work along with the rest of the turkey industry to reduce Salmonella. Their efforts are evident in the lower FSIS Salmonella performance standard for raw turkey relative to raw chicken.

“More responsibility is placed now on the establishments to test for pathogens and actively prevent foodborne illness,” according to a spokesperson from the FSIS. “We are always working to get better and faster.”

The lower performance standard for raw turkey (13.5%) indicates more industry confidence in raw turkey than raw chicken (25%) producers to keep things clean. For the record, neither meat is more or less prone to Salmonella contamination than the other.

“Recent massive recalls due to Salmonella outbreaks… offer a serious reminder that the public deserves more transparency and accountability from the meat industry,” Irina Anta, Counsel for Compassion Over Killing. 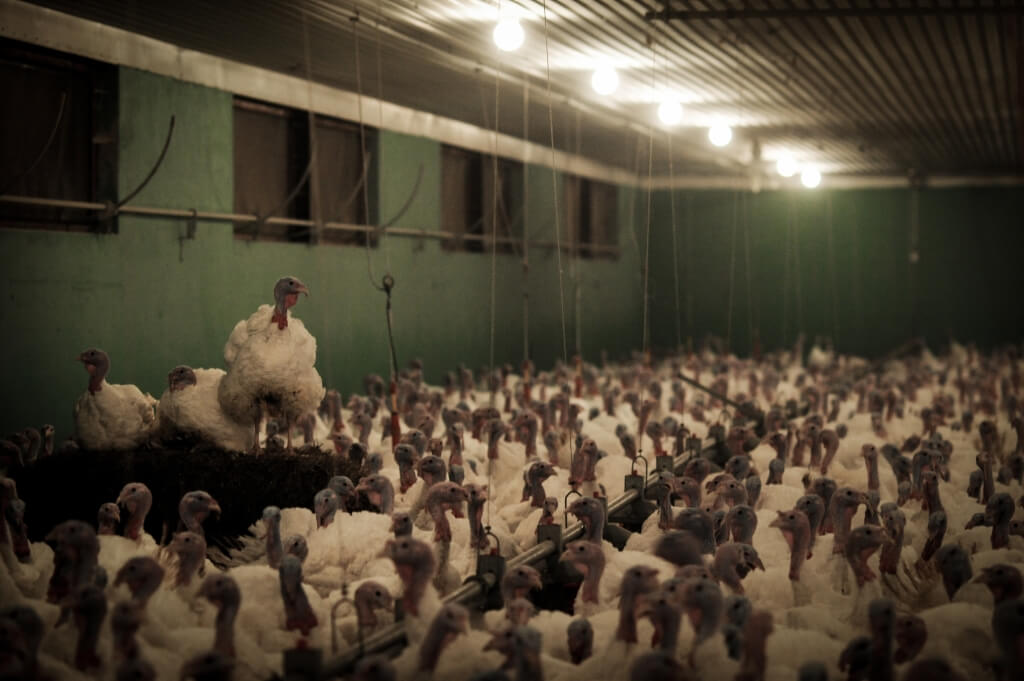 With outbreaks of this magnitude, processing 2 billion fewer pounds of meat does not make Jennie-O turkey 11.5% less likely to contain Salmonella. At the end of the day, no meat is safe.

In the months leading up to the release of the USDA report, 92 people reported Salmonella Infantis linked to raw chicken products across more than half of the continental U.S.

A common supplier of contaminated chicken has not been identified yet. The FSIS found the outbreak strain of Salmonella Infantis in live chickens and many different kinds of raw chicken products.

According to officials from the CDC, the levels of contamination found indicate the outbreak may be widespread throughout the chicken industry.

“Salmonella is a complicated issue for the poultry industry as a whole,” said an official from the FSIS.

“Factory farms that raise chickens and turkeys for meat are filthy and overcrowded,” said Sharon Nunez, President of Animal Equality. “The tens of thousands of birds crammed into these dark sheds are forced to live in their own waste.”

Inside the slaughterhouse, the message is: so, we have to be better, faster at breaking down animals. Companies write their food safety standards with this in mind. Speed first. Animal welfare, performance standards, heck–foodborne illness, later.

“It’s no wonder that these facilities are breeding grounds for Salmonella,” said Nunez.

A history of criminal incompetence

This is what happens when profits drive food inspection policy. Producers get comfortable. They slip up, and without the appropriate industry safeguards, people get sick (a lot of people) and some of them die.

“The profit-driven chicken and turkey industries are producing cheap meat as quickly as possible, often at the expense of animal welfare, as well as, worker and consumer safety,” said Anta.

Salmonella causes 1.2 million illnesses and 450 deaths in the United States every year. It’s increasingly resistant to antibiotics and increasingly widespread throughout the farm animal industry.

Rampant Salmonella outbreaks demonstrate a history of criminal incompetence on the part of the USDA and meat companies. When a federal agency promotes faster slaughter and “better” Salmonella performance standards, the movement away from such an inhumane and unsanitary practice is lost. The result is sickening. 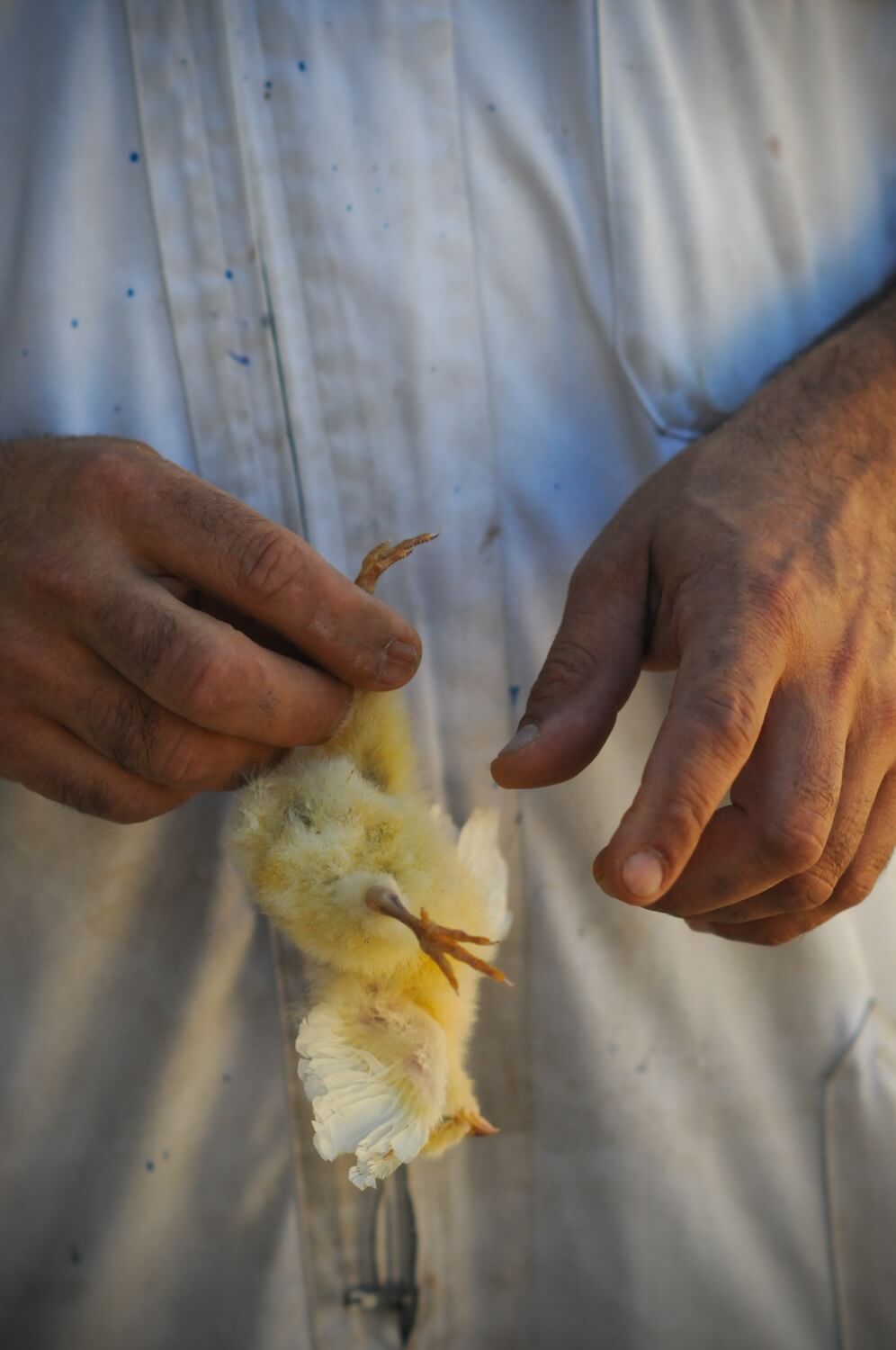 No matter how many times meat companies and federal agencies remind us that meat is safe, they won’t change our minds. Eating animals is wrong. People choose to eat meat because they’ve been conditioned to eat meat their entire lives, but change has to start somewhere. The historic levels of Salmonella contamination this year should stand as a reminder that no meat is safe.

Meat companies need to step up or shut down. Consumers should not be held responsible–at the cost of their lives and millions of animal lives–for the criminal incompetence of the meat industry.

Let them hear your voice. Demand more transparency and accountability from the meat industry. Call your local slaughterhouse. If you live in Gainesville, Georgia or Chattanooga, Tennessee, call a few.

Here’s the complete list of slaughterhouses that failed the inspection and how to reach them. 1-800 numbers not included.

We tried as many numbers as we could. You won’t get a machine on the other end. You’ll talk to a person who–unlike the intern answering phones at your local congressman or woman’s office–is not anticipating an angry caller. Please be respectful.

Note: All facilities were responsible for slaughtering 20,000 or more animals last year. 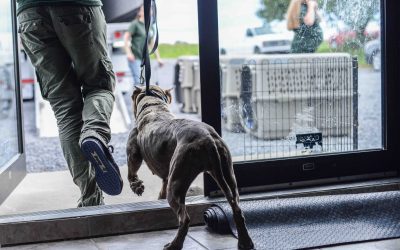 Despite being classified as a felony in every U.S. state, dog fighting takes place in many parts of the country. Dogs are forced to fight each other almost daily, and many don’t make it out alive. 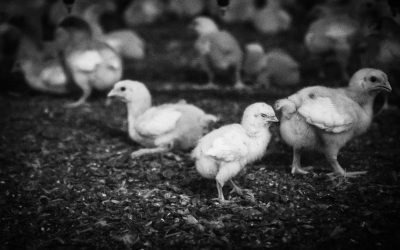 Perdue is often touted as a leader in chicken welfare. But across the poultry industry, companies continue to leave their youngest and sickest birds behind. 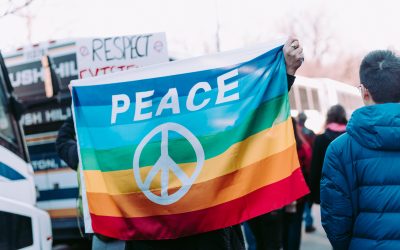