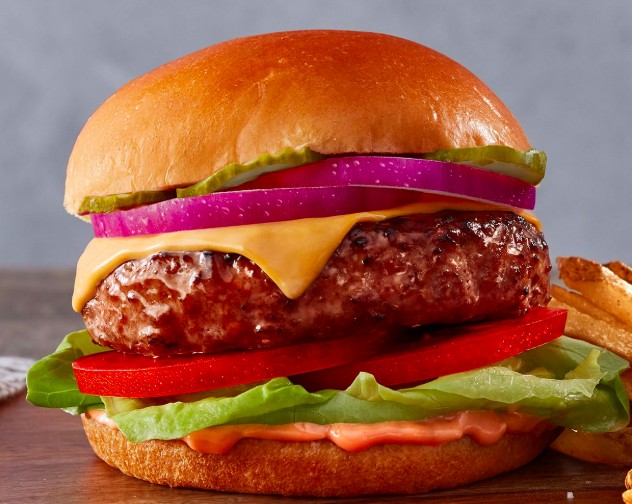 Plant-based meat is rapidly growing in popularity. This has created a surge in awareness and put meat alternatives into the spotlight.

2018 was the year that meat alternatives were truly put on the radar of many people outside of the world of vegans. And 2019 was the year that they became a force to be reckoned with. Beyond Meat’s IPO made international headlines and showed people that plant-based alternatives are here to disrupt the system.

Plant-based meat isn’t anything new. In fact, they have been around for decades. Tofurky was launched all the way back in 1980 and the Boca Foods Company, maker of the famous Boca Burger, dates back to 1979.

And while those products are still popular to this day, the plant-based meat industry has come a long way since the days of few choices and scarce availability.

What is Plant-Based Meat?

Plant-based meat is an animal-free alternative to common processed foods that are typically made of animal parts.

These products are typically made from soy, vegetables, seitan, tempeh, pea proteins, and other plant-based ingredients.

Some of the most popular types of plant-based meat are made to replace hamburgers and hot dogs. It’s also easy to find plant-based nuggets, deli slices, cheeses, dairy alternatives, and much more.

And while plant-based meat used to consist mainly of soy and vegetables, new technologies have made it possible to create meat-free hamburgers that can even fool meat eaters.

Plant-based meat (like Beyond Burgers) is a vegan product that is made from non-animal sources. While these meat alternatives might not be the healthiest options (more on that soon), they are appealing to almost everyone. The target audience ranges from vegans all the way to meat eaters.

And while the target audience of these meats is meat eaters, vegans should be applauding the efforts and rooting for victory when it comes to the success of companies like Memphis Meats. No one is expecting a vegan to consume the clean meat but its success could be an integral part of the fight to end animal farming.

While lab-grown meat is a fascinating topic that deserves a lot of attention, this article is going to look into some of the companies leading the way in the plant-based meat revolution.

There are two companies that have made waves in the international spotlight.

Beyond Meat and Impossible Foods have been cheered in the mainstream and their products are exploding in popularity.

Impossible Foods landed a deal with Burger King to create the Impossible Whopper and Beyond Meats were popping up pretty much everywhere leading up to their mind-blowing IPO.

And while these aren’t the only plant-based companies out there, they are the ones driving the most awareness.

The progress these two companies have made in the mainstream is game-changing. Because they have broken into some of the largest franchise restaurants and supermarkets, they are spreading the word about plant-based living that no other companies have ever been able to do.

And while many other plant-based meat companies have existed for years and paved the way for Beyond Meat and Impossible Foods, these two companies are showing the world, especially meat eaters, that a plant-based diet is a very real possibility.

What is Plant-Based Meat Made of?

There are a lot of different options out there so each product will have different ingredients.

Back in the day, many plant-based meat alternatives were compressed vegetable patties or soy patties. Some of the brands that made these burgers famous were Morningstar Farms and Boca Burgers, two companies that are still around today and wildly popular.

But, again, let’s look at the Impossible Burger and the Beyond Burger as those are the products currently making waves and breaking the plant-based diet into the mainstream.

To the surprise of many, the Beyond Burger has no soy, gluten, or GMOs. It also doesn’t qualify as a veggie patty because it isn’t made out of vegetables.

So What Are Beyond Burgers and Impossible Burgers Made of?

The four main ingredients of a Beyond Burger are water, pea protein isolate, canola oil, and refined coconut oil. Beyond that, there are many other ingredients that help bind the burger and preserve the patty.

Many people think of veganism and plant-based eating as a much healthier lifestyle. While many studies point out that this is true, simply going plant-based isn’t a guarantee that you will automatically be healthy.

Beyond Meats and Impossible Foods produce delicious plant-based meat alternatives. The fact they are succeeding in a meat eater’s world is proof of that. However, they are far from healthy foods.

It is very possible to follow a plant-based diet and only eat whole foods that provide all of the nutrients you need for optimal health. But junk food exists in the plant-based world. In fact, more and more highly processed vegan junk foods are hitting shelves and making it so people on a plant-based diet have more choices, healthy or not.

Let’s look to see if the most popular items are healthy or not.

Are Beyond Burgers and Impossible Burgers Healthy?

The term “healthy” is certainly subjective in this debate.

And while there are countless articles and opinion pieces about this very subject (Googling “are Beyond Burgers healthy?” yields over 40 million search results), it could be easy to see this from two different angles. 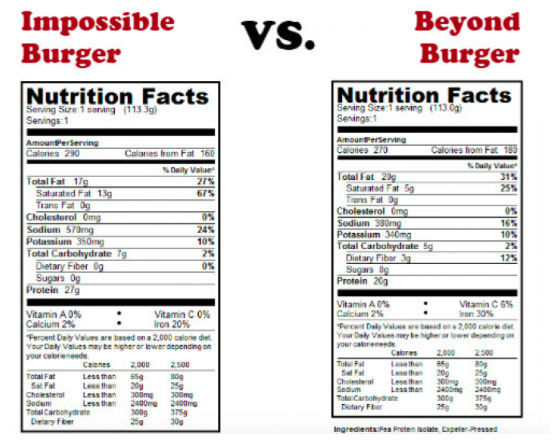 However, a single Beyond Burger still contains 31% of your daily suggested fat intake, 25% of your saturated fat, and 16% of your sodium. That is literally just the patty, not taking into account a roll or any toppings you add to the burger.

But let’s get one thing straight. Neither the Beyond Burger or the Impossible Burger are being advertised as healthy snacks.

They are being advertised and sold as plant-based alternatives when it comes to snacking on junk food. No one goes to Burger King to get a healthy meal. People go to Burger King to get a fast, quick bite. And to be able to do that while buying a burger that tastes amazing and reminds meat eaters of the real thing without having to kill a cow is a wonderful thing.

The debate about whether or not they are healthy should not even exist. Highly processed foods are more likely than not bad for your health. That’s why it’s always best to eat processed foods in moderation.

What is the Healthiest Vegan Meat?

Moving away from the commercially successful junk-food plant-based meat alternatives, let’s look at some vegan meat options that are actually much healthier for you.

There are many different plant-based meat alternatives that can be made at home without needing a laundry list of ingredients or a lab to process those ingredients.

All of these ingredients are capable of being cooked in different ways and shaped into a variety of textures to appeal to whatever craving you might have.

Making plant-based meat alternatives at home is cheaper and easier than most people think. And the best part about taking the homemade route is that the results will be much more healthy than buying a highly-processed option from a store or restaurant. Deciding which ingredients become a part of your meal gives you control over your diet and health.

Is a Plant-Based Diet Healthy?

Yes. A plant-based diet is very healthy if the person pays attention to what they are eating.

It is possible for someone going vegan or vegetarian for the first time to not have a great understanding of nutrition or how to eat a well-balanced diet.

Some people will start loading up on carbs by consuming more bread and pasta but fail to mix in other essential foods. By not eating an eclectic selection of food, it is possible to face health problems.

It is, however, very realistic to have optimal vegan nutrition.

Understanding the nutrients, minerals, and vitamins needed to maintain a healthy vegan lifestyle is key.

Keep in mind that this isn’t something that happens overnight. Not everyone learns about nutrition or knows what they need to stay healthy and strong.

Studying about plant-based nutrition and learning about being healthy after transitioning to a plant-based diet is recommended. This way you won’t run the risk of encountering any deficiencies along the way.

Going plant-based happens for a variety of reasons. Some people do it for the animals and are known as ethical vegans. Others do it for the environment and some do it for health reasons.

As long as you understand what you are getting into with your new plant-based diet then it shouldn’t matter what drove you to make the decision.

Just know that a plant-based diet can be healthy if you strive for a healthy lifestyle.

Most plant-based meats, especially the ones you find in restaurants or frozen at the grocery store, aren’t meant to be health foods.

They are usually highly-processed, delicious options for those that don’t have the time or desire to make their own food.

Beyond Burgers and Impossible Burgers are delicious. If that wasn’t the case, they wouldn’t be seeing the success in the mainstream that they are experiencing right now.

But they shouldn’t be confused as health foods. That is an important thing to remember.

They don’t exist for that reason. They exist to give people an alternative to popular foods that come from the slaughter of innocent animals.

Ethan Brown, the CEO of Beyond Meats said that their goal is to “make the existing product on the shelves obsolete.”

So while they might not be producing the healthiest food in the world, their mission is much nobler than simply human health.

They want to save billions of animals from being bred into an existence of suffering and imminent slaughter.

And from the reaction to their IPO and the popularity of their products, they are on their way to making that happen.