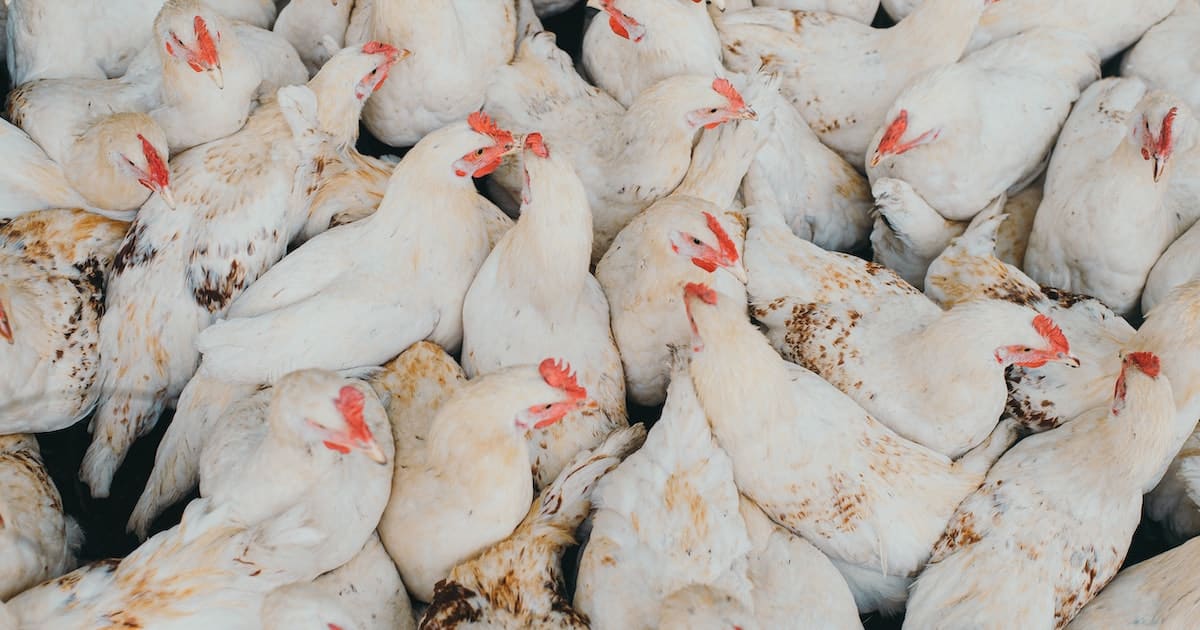 The purpose of factory farming is to profit by producing meat for a mass consumer market, lowering the cost of production, and maximizing efficiency. It arose as part of the Industrial Revolution in the United States, as cows and pigs became the raw material for increasingly mechanized “disassembly lines.” Developments in transport and technology, and the falling price of feed, then allowed the quest for efficiency to move from the slaughterhouse to farms. Yet factory farming’s success has come at the expense of environmental, animal welfare, labor, antiracist, and other community concerns. Michael Pollan describes the setting of the animal factory farm in The Omnivore’s Dilemma:

“The industrial animal factory offers a nightmarish glimpse of what capitalism is capable of in the absence of any moral or regulatory constraint whatsoever. (It is no accident that the nonunion workers in these factories receive little more consideration than the animal in their care.) Here in these wretched places, life itself is redefined—as “protein production”—and with it “suffering.” That venerable word becomes “stress,” an economic problem in search of a cost-effective solution such as clipping the beaks of chickens or docking the tails of pigs [. … .] It all sounds very much like our worst nightmares of confinement and torture, and it is that, but it is also real life for the billions of animals unlucky enough to have been born beneath those grim sheet-metal roofs into the brief, pitiless life of a production unit[.]”

In a factory farm, animals are essentially agricultural machines. Their bodies are fit to be turned into bottles of milk, wedges of cheese, deli cuts of turkey, fish sticks, and grilled spareribs. This production process isn’t just harmful to the nonhuman animals raised for their meat, but also to the air, water, land, ecosystems, and climate that we rely on.

What Is Factory Farming?

Factory farming is the standard way nearly all meat and dairy is produced worldwide. The term describes an intensive process where thousands of the same type of chicken, pig, cow, fish, or other animal are packed into a confined space, often with little or no access to the sun or fresh air. Animals are born, fed, watered, and inseminated en masse through automated or highly mechanized processes. They are then sent to slaughterhouses, processed, and packaged into frozen, canned, chilled, or dried products like chicken nuggets, pate, beefsteak, or prosciutto.

Most animals raised for food are crammed into concentrated animal feeding operations or CAFOs. The food that the animals eat is also grown using industrialized and intensive processes, which depend heavily on privately owned seeds, synthetic fertilizers, herbicides, and pesticides to grow vast fields of mono-cropped corn and soy. Often animals are fed antibiotics and hormones with their food and water, a reflection of their poor health and the pressure their bodies face to grow quickly.

Does Factory Farming Affect the Environment?

Industrial-scale cattle ranching is a primary cause of deforestation in Brazil’s Amazon rainforest. The cleared land is either used for feedlots and pastures where the cows can graze, or for growing soybeans, most of which are fed to livestock to double them in weight prior to slaughter. The effects of deforestation include loss of land for Indigenous peoples, loss of habitats for plants and animals, increased greenhouse gases in the atmosphere, and also, potentially, droughts in regions as far away as California and São Paulo.

The industrial production of meat is a major driver of global warming thanks to its release of greenhouse gases. The effects of global warming include extreme weather events like droughts, hailstorms, floods, and hurricanes. Climate change also does damage to ecosystems, whether through rising sea levels, ocean acidification, increased prevalence of diseases, or outright extinction of plant and animal species.

The industrial production of meat in North America was introduced by settler colonists, and Kyle Powys Whyte, in their book chapter “Indigenous Climate Justice and Food Sovereignty,” connects food systems to Indigenous groups’ response to climate change. Whyte writes that “vulnerability to climate change is part and parcel with the terraforming of colonialism. […] In the case of treaty rights, the United States disrespected the terms of treaties with Indigenous peoples in order to make way for many of the industries and lifestyles that have brought about the current rise in global average temperature.”

The livestock sector contributes more greenhouse gas emissions than the transportation sector, according to a landmark 2006 FAO report. Nitrous oxide, methane, and carbon dioxide are the three major greenhouse gases released by factory farming practices. These gases are emitted throughout the entire life cycle of meat production, including deforestation, manufacturing, and transportation of petroleum-reliant synthetic fertilizers, production of growth hormones, manure and exhalations of livestock, and burning the fuels for machines that produce animal feed and that transport livestock to slaughterhouses and meat to the deli counter.

Meat production is a major driver of changes in land usage. The livestock sector eats up most of the land used for agriculture in the world, while only producing “18 percent of the world’s calories and 37 percent of total protein,” according to Our World in Data. This land use comes with major losses in water availability, biodiversity, habitats, and soil health. Converting biodiverse lands to industrial use, such as cattle ranching, is also a known risk for new zoonotic diseases that impact human health.

Marine environments and coastal communities have been directly hurt by pollution, overfishing, and bottom trawling from the fishing industries. However, most ocean pollution comes from the land in the form of runoff and atmospheric change.

Farmlands that produce animals and animal feed are known sources of nitrogen and manure runoff that contribute to the development of low- or no-oxygen “dead zones” in bodies of water. Low oxygen levels in the ocean can slow the growth rate of marine animals, damage their immune systems, increase stress, make it difficult for them to procreate, and even kill them. These changes in individual organisms then reverberate throughout entire ecosystems, marine populations, and can even hurt coastal livelihoods.

With the increase of carbon dioxide in the atmosphere due to human activity, the ocean is also absorbing more carbon dioxide, making it more acidic and less inhabitable.

Cattle ranching in the western United States has its roots in the appropriation of ancestral Indigenous lands and the genocide of Indigenous peoples. This same cattle ranching worked in tandem with the creation of the industrialized meat sector that led to today’s methods of farming chickens and pigs. This farming system is controlled by large companies.

For example, meatpackers buy cattle from ranchers in the United States and other countries like Brazil and turn them into meats to be sold at places like Amazon, Wal-Mart, and Costco. The U.S. cattle industry’s top four companies dominate 85 percent of its meatpacking process. As those four large beef companies grew, they increasingly squeezed smaller and midsize independent cattle ranchers and meatpackers out of the market.

Meanwhile, rural areas of the United States, where meatpackers and the rest of the animal agricultural sector are based, tend to be in economic decline, with higher rates of poverty and unemployment, a less educated workforce, and a shrinking population. Rural areas have also become places where immigrant communities are increasingly living in high-poverty, isolated neighborhoods.

Cattle ranches across the western United States, such as those in Texas, Nebraska, Oklahoma, and South Dakota, sit on top of the Ogalalla water aquifer, which Denis and Gail Hayes describe as a source of water for “40 percent of the grain for grain-fed beef” in the United States, in their book Cowed. While it was once unnecessary to filter or treat water from the aquifer prior to drinking it, the water is now contaminated with “pesticides, fertilizers, feedlot wastes, trace metals, and volatile organic compounds.”

Factory Farming and Water Use

Agriculture is responsible for most of the world’s fresh water usage, and animal agriculture accounts for much of this use. Meanwhile, animal products have two to six times greater water footprints than pulses. In the United States, the livestock sector consumes about 2 billion gallons of water per day, though this figure excludes the irrigation and other water uses needed to produce animal feed crops. The aquaculture sector consumes about 7.6 billion gallons per day.

Species of plants, animals, bacteria, and fungi are going extinct at a higher rate than at any time in the past 10 million years, according to a Chatham House report. The main reason for this biodiversity loss is the conversion of lands previously devoted to natural ecosystems into intensive, industrial-style farmland. To make way for cattle farming, an area about 1.5 times the size of Spain has been cleared in the Amazon rainforest (more than 75 million hectares) between 1978 and 2020. The loss of biodiversity is primarily down to a global food system that prioritizes cheap food and whose intensive farming methods degrade “soils and ecosystems.”

Facts and Statistics About Factory Farms and the Environment

What Can We Do?

Kyle Powys White writes that food systems are not only about how societies produce and consume food but that they are “collective capacities” for doing worthwhile things like fostering political self-determination and healthy lifestyles. In this view of food systems, we can avoid doing things that would harm others. We can build systems centered around deep, trustworthy relationships between entities—systems that “connect humans and nonhumans culturally, spiritually, economically, and nutritionally.”

Factory farming is a primary cause of biodiversity loss, the overuse of water, water pollution, land-use change, global warming, and deforestation. It is part of a global food system that prioritizes cheap food at the expense of animal welfare, society, and the environment. People seeking to interrupt this trend of environmental destruction, as it is perpetuated by industrial animal agriculture practices, have an opportunity to instead create food systems that support the collective good.