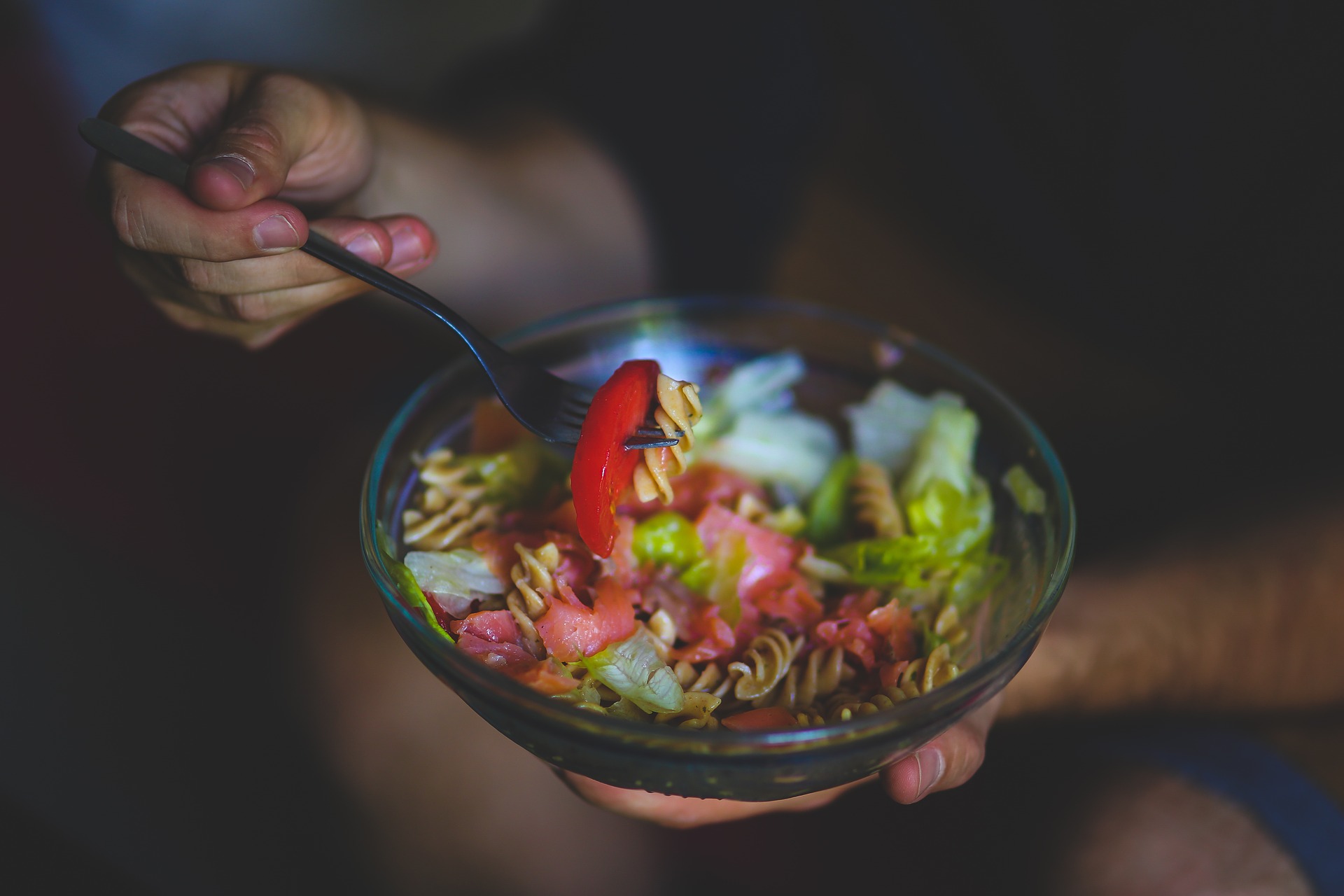 The Best Defense Against the Next Pandemic: Your Fork

As a volunteer scoops salad into a bowl, she says, “Some people who eat here don’t get many greens the rest of the week.” She hands the bowl across the table, and the man who accepts it thanks her. She is spending her Sunday afternoon in Allan Gardens with Food Not Bombs, a grassroots organization that cooks and dishes out free vegan lunches.

Food insecurity—when poverty limits access to food—is a problem in Toronto, where this chapter of Food Not Bombs is based. In Ontario, 11.3 to 12.5 percent of families struggle to pay for food. And across North America, folks who rely on emergency food assistance, from shelters, food banks, and community kitchens may be especially at risk for nutritional deficiencies. One U.S. study shows that the diets of homeless people, for example, are high in calories, fat, and cholesterol; the study’s participants averaged only 3.4 servings of combined fruit and vegetables per day. As the cost of living rises, food insecurity is likely to rise too.

Serving primarily plant-based meals in shelters and soup kitchens would be a partial salve. Minimally-processed grains, fruits, vegetables, and legumes can comprise plant-based meals that are low in saturated fat and aligned with federal nutrition guidelines. A strictly vegan kitchen is well-positioned to accommodate other special dietary needs like vegetarianism, low sodium intake, and allergies to dairy, shellfish, and eggs. Some municipalities enforce guidelines, like Toronto’s Shelter Standards, requiring that city-administered shelters make an effort to accommodate special diets. A manager at one Toronto shelter said that vegetarian meals must be provided “when requested;” one well-planned plant-based menu would eliminate the need to cook multiple meals for specific dietary requests. Plant-based menus would benefit shelters as well as clients.

Serving plant-based meals in shelters would alleviate health concerns about serving animal products to vulnerable people. Evidence is growing for the many health benefits of plant-based diets, and organizations like schools and hospitals are making the switch (and making the news for it). Last year, New York passed a law requiring that all state hospitals offer a plant-based option at every meal. The American College of Cardiology is encouraging every hospital in the country to follow suit. A shelter’s decision about what types of meals to serve should be made by consensus, one that includes the members of society who require the shelter’s services. Food-insecure people are especially vulnerable to adverse health effects; it’s important that they, too, have access to nutritious fare.

Offering plant-based meals in shelters alleviates ethical concerns, too. Last summer, Denver’s Parks Department created controversy when it proposed to donate culled Canada geese to food-insecure families for consumption. The suggestion generated social media debate and a protest, but would not have drawn attention if the wild geese were of a species that North Americans typically consider as edible. Billions of farmed animals raised for consumption live in squalid conditions out of sight of those who consume them; these creatures deserve as much consideration as wild geese. Serving meat in emergency food assistance programs means serving marginalized animals to marginalized people. Ethical concerns compound nutritional concerns; feeding farmed animals to food-insecure people compounds suffering.

The goal of serving only plant-based meals to those in need may seem lofty, but the means are already available. Food insecurity only exists because capitalism treats food as a commodity instead of a human right. Research suggests that food costs compel many shelters to cook mostly the foods donated by their communities—foods that are often highly processed and high in fat. But the abundance of wasted fresh food in industrialized food systems—58 percent of the food in Canada’s supply chain is lost or wasted before it reaches consumers—presents another possible source of plant-based nutrition. Research by Second Harvest, a food rescue organization, estimates that farms and groceries currently only rescue and redirect half of their unsellable fresh produce.

Requiring food producers and sellers to divert unsellable produce to providers of emergency food assistance would drastically increase shelters’ ability to serve nutritious food. In Toronto, food rescue organizations like Second Harvest and Feed it Forward, from which Food Not Bombs receives donations, are taking alternative approaches. By receiving nutritious donations and growing produce itself at a local community farm, Food Not Bombs is able to serve plant-based meals—including legume soups, rice pilafs, pasta with greens, roasted veggies, and salads. The Canadian federal government recently passed a law to fund more food rescue and local food initiatives, but the need still exists for a coherent policy to efficiently rescue and donate the huge amount of perishable produce that is wasted each day.

But what if shelter clients (and operators) are not interested in menu changes because of their taste preferences? A study conducted at two shelters in California shows that shelter clients tend to fill up on starches and proteins, discarding around 40 percent of their portions of fruits and vegetables. This preference for starch and protein is a barrier to healthy eating for the whole North American population, not just the food-insecure. Food manufacturers have unnaturally warped our taste preferences. Transitioning to plant-based diets is a way to divest from an industry that preys upon the marginalized by valuing profit over health. Education is a key part of facilitating this divestment: one U.S. study reveals that more shelter clients express interest in healthy foods after taking nutrition classes. Engagement is key, too: giving clients an active role in developing new menus incorporates their taste preferences and cultural traditions

Progressive community food organizations like The Stop, Community Food Centres Canada (CFCC), and FoodShare are already changing the face of emergency food assistance with programs focused around healthy food, education, and food skills. In many ways, these programs are congruent with a focus on plant-based nutrition. A survey of CFCC’s clients reveals that 74 percent are eating more fruits and vegetables as a result of its program interventions. Community health organizations may be concerned that eliminating meat from their menus is at odds with clients’ cultural traditions—and this is an important consideration. Acknowledging that the industrial food system is a colonial system of oppression is also necessary. Animal agriculture perpetuates colonialism globally by feeding 75 percent of the world’s grain to livestock. Livestock, in turn, produces only about 13 percent of the world’s total food calories, of which rich countries receive a disproportionate share. Animal farming’s environmental devastation, however, disproportionately affects the less affluent countries of the global south. Plant-based foods have an important role to play in global decolonization.

In Allan Gardens, Food Not Bombs’ vegan options are well-received by first-time clients and weekly regulars alike. Regulars rave in particular about the soup—some combination of lentils with sweet potatoes, carrots, or squash on most weeks. Part of the societal mandate to care for everyone includes guaranteeing food security. As plant-based diets gain in popularity and credibility, everyone deserves access to their myriad benefits.