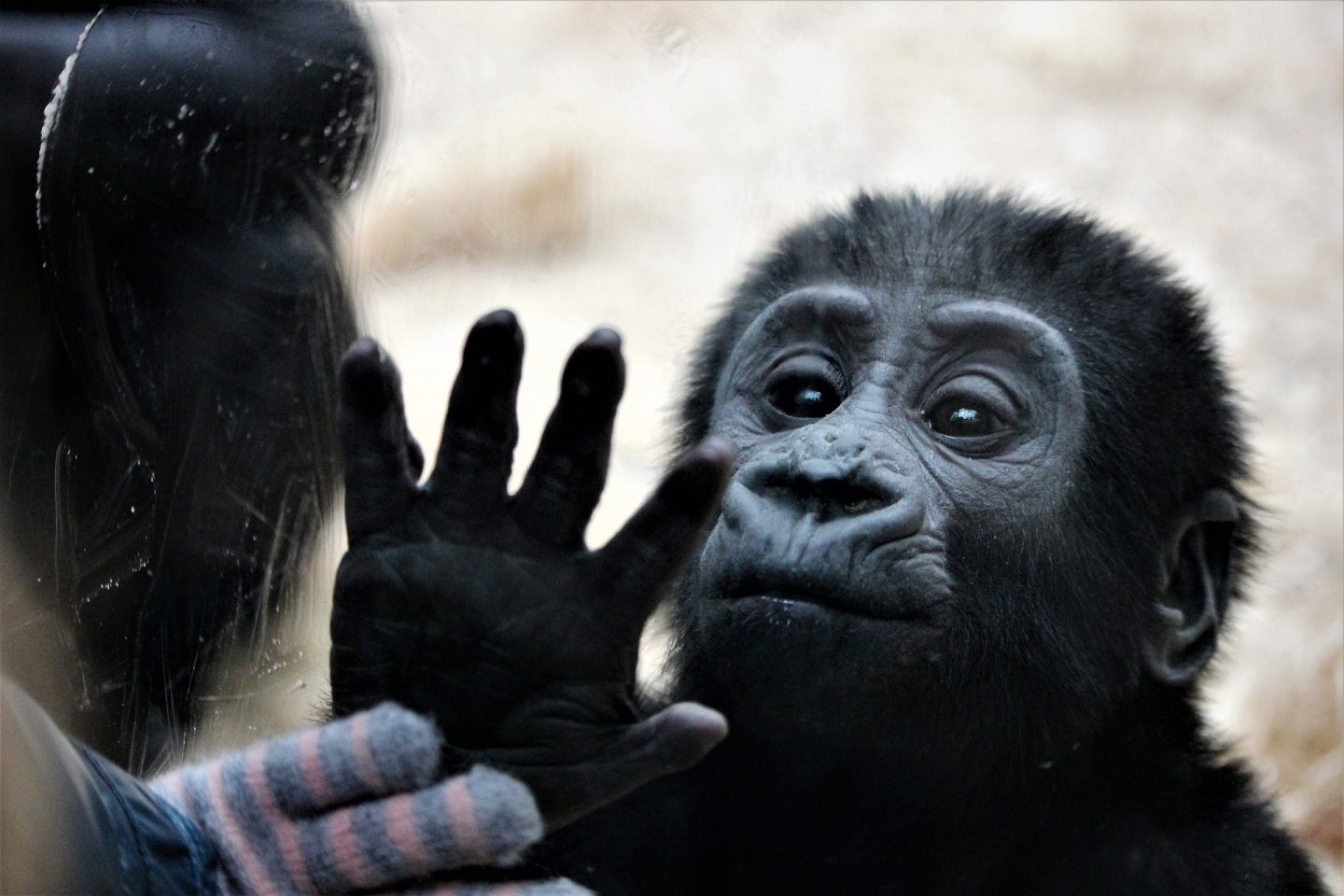 On New Year’s Day, a public memorial appeared at the gates of Krefeld Zoo in North Rhine-Westphalia, Germany. A local newspaper image showed flowers, candles, cuddly toys, a framed collage of three orangutans and two gorillas, children’s drawings wrapped in cling film, and the word “Warum?” (“Why?”) written on cardboard signs. “Why did this have to happen to you?”

A sky lantern landed the night prior on the roof of a tropical enclosure in Krefeld Zoo, setting the building on fire. The sky lantern was released by three women celebrating New Year’s Eve. The building was ablaze when fire services arrived; the response team did not attempt to evacuate the trapped animals but rather focused on protecting adjacent buildings. Police officers stood by, prepared to shoot animals who might escape. The affected animals lived in a 2,000-square-meter building without fire protection measures. The fire burned out at 4:40 a.m. on New Year’s Day, yet the search for survivors did not begin until two hours later—when zoo employees heard screaming from within the ruin. A search party discovered and evacuated two surviving chimpanzees. At 8:00 a.m., another search party found an orangutan and a gorilla who were both severely injured. A veterinarian injected the orangutan with an overdose of tranquilizer, which is the legally required method of euthanizing animals in Germany. The tranquilizer failed to euthanize the gorilla because of his extensive skin injuries. At 10:15 a.m., a police officer shot the gorilla with a machine gun, claiming afterward that he was obligated to release the animal from suffering. In total, more than 60 animals died in Krefeld Zoo on New Year’s Day.

After the tragedy, Krefeld Zoo posted black-and-white pictures on the zoo’s website, similar to photos shown at funerals, of every deceased ape. The remaining 40+ victims received significantly less attention. Online, the zoo lists the affected animals as follows:

This ranking, unlike accounts of human casualties, is not by name or number of fatalities. The apes are listed first, the smaller monkeys second, the bats third, the rodents fourth, the birds (whose species is unspecified) fifth, and the reptiles (whose number is unspecified) last. The omission of the birds and lack of pictures of other victims clearly indicates that the zoo considers the loss of the great apes more lamentable than the loss of other creatures.

Media coverage of the Krefeld Zoo fire focused so exclusively on the great apes that it is possible to believe that only five orangutans, two gorillas, and one chimpanzee died. The media, by only scrutinizing the deaths of the most human-like animals, reveals a species bias that renders all impartial investigation impossible. The media coverage of the Krefeld Zoo fire also serves to answer the question of why the fire happened in the first place. Singling out the three women who released the sky lanterns—which are illegal in Germany—provides only a cursory explanation for the tragedy. What turned one irresponsible act into a death sentence for many animals is a deeply-rooted social bias known as speciesism.

Speciesism is a form of discrimination in which some species are regarded as less important than others. The zoo’s ranking of the victims and the media’s omission of 21 avian victims are prime examples of speciesism. Had the birds been considered as “important” as the great apes, then the zoo would have taken care to disclose their species. Without its speciesist bias, the media would have reported the other forty victims. The logic by which some creatures matter more than others is based on a human-centric notion of worth.

In addition to influencing the media’s portrayal of the fire, speciesism contributed to the Krefeld Zoo tragedy itself. When humans consider all other sentient species as less important than themselves, nonhuman animals are treated as subordinates. The zoo claimed that it had not been required to install fire protection measures and that smoke detectors—legally required in all human-occupied buildings in Germany—would not have worked accurately in the building’s dusty atmosphere. Other German zoos have installed fire alarm systems in similar tropical houses. Further, the roof of the affected building consisted of flammable glass, creating a preventable fire hazard. The personnel present before, during, and after the fire was insufficiently prepared to deal with animal fire victims. Only one watchman guarded the 13-hectare grounds of the zoo during a night known for causing mental and physical harm—including stress, fear, tinnitus, and hearing loss—to animals. Had the veterinarian been equipped with a more suitable drug or remedy for animal fire victims, the further trauma of Massa being shot might have been prevented. The lack of adequate fire protection measures, nighttime supervision, and veterinary equipment all stem from the belief that humans are more deserving of protection and consideration than other sentient beings.

Zoos are, by definition, places where animals are put on display to amuse and entertain humans. In the U.S. alone, zoo animals face 181 million visitors every year. Zoo animals are often separated from their families and live in inadequate habitats while enduring mental and physical distress and forced interactions with visitors. Some zoos attempt to recreate animals’ natural habitats, but these attempts often fail because, ultimately, zoos prioritize visitors’ enjoyment over animals’ wellbeing. Before the Krefeld Zoo fire, the website where the zoo now displays the list of victims asserted that the “Great Ape House is exciting at all times…Only a dry trench separates visitors from the apes, which makes it possible to see and hear the animals directly.” After the fire, Krefeld Zoo expressed a sense of loss for the deceased animals but also has decided to rebuild the tropical house for a “new” generation of great apes. As of February 2020, the zoo had collected 1.5 million euros in fire-related donations; the number of members of Zoofreunde Krefeld e.V., a society supporting the zoo, rose from 3,200 to 4,700. Prioritizing the experiences of human zoo visitors over the experiences of permanent zoo residents equates to valuing a trivial human desire for a specific form of “fun” over animals’ most basic needs.

The memorial in front of Krefeld Zoo reveals a silver lining about the human-animal relationship—people are outraged by the loss of life. The press photos of the “Why?” signs follow a German media tradition of using images of impromptu memorials to convey a combination of grief, outrage, and scrutiny after tragedies that the public perceives as preventable. Few images could convey the message of the German public suspecting systemic failure more clearly than a “Warum?” sign framed by teddy bears and roses. In Krefeld, the human mourners partly overcame speciesism by grieving at least some of the zoo animals as they would human victims, while rightfully perceiving unjust systemic failures.

Legally defining animals as less worthy than humans all but guarantees that tragedies like the Krefeld Zoo fire will happen again. Fires regularly kill large numbers of captive animals—barn fires in 2019 killed at least 110,000 animals in Germany and 469,000 animals in the United States. The Krefeld Zoo tragedy demonstrates that holding animals captive is not an ethical or sustainable way for humans to interact with wild or “exotic” animals. Animals deserve not to be enslaved based on humans’ speciesist beliefs; they also need laws and infrastructure that protect and honor, at the least, their basic needs. Disaster management training for natural or human-caused catastrophes, including fires, needs to include clear and humane protocols for animals. Disaster relief workers need access to equipment designed for animals—like the oxygen masks for companion animals that some U.S. fire departments already use. Perhaps by spending a day in the zoo, rather than at the zoo, humans would finally realize that nonhuman animals are equally morally significant.

To honor all the victims of the Krefeld Zoo fire, below is the alphabetical list of victims with all 15 species included:

3 western chimpanzees (two of whom have survived)