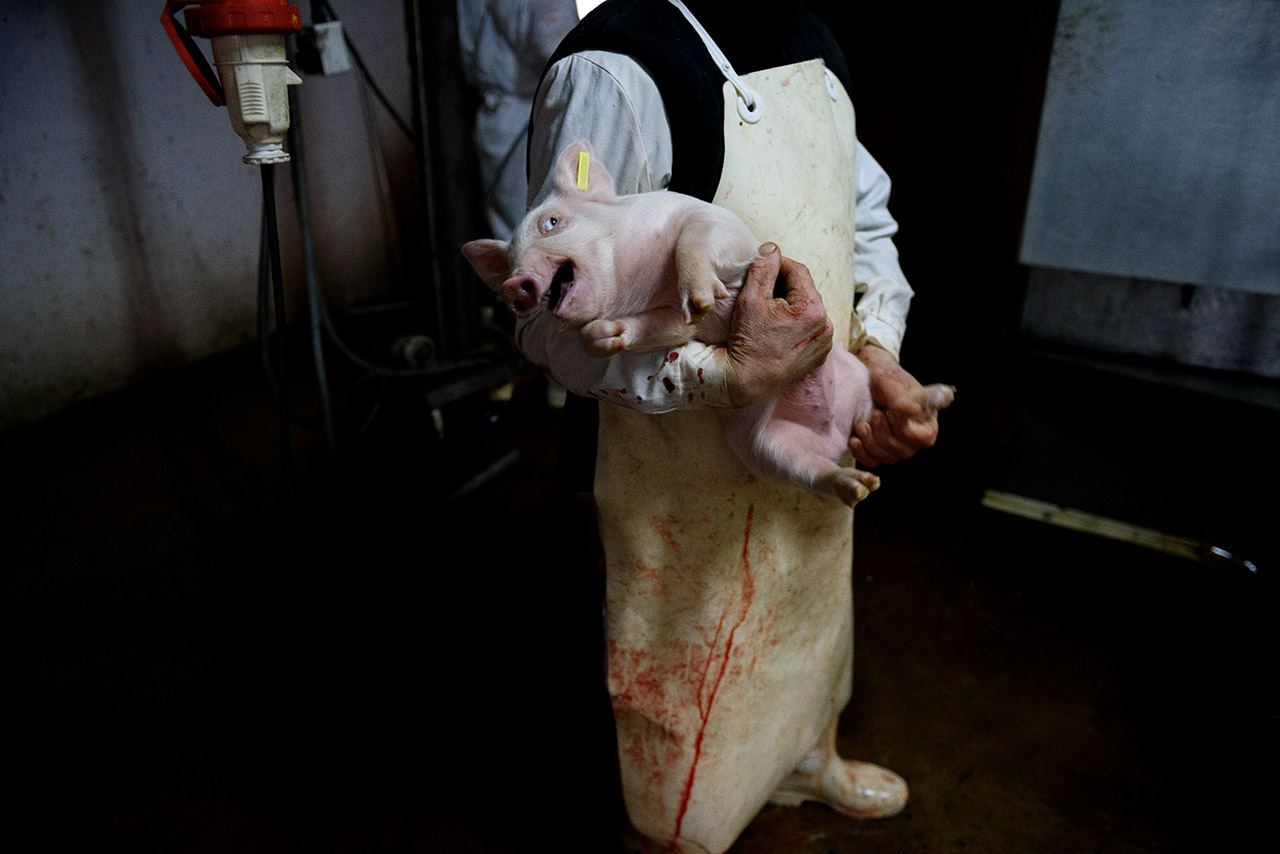 The case is the first filed by Lewis & Clark Law School’s new Animal Law Litigation Clinic (ALLC) at the Center for Animal Law Studies, the only law school clinic in the world dedicated to farmed animal advocacy. ALLC brought the case forward on behalf of some of the nation’s leading animal and environmental advocacy groups, including Farm Sanctuary, Animal Equality, the Animal Legal Defense Fund, the Center for Biological Diversity, Animal Outlook, Mercy For Animals, and North Carolina Farmed Animal Save.

The groups’ legal action highlights not only the USDA’s shortcomings on animal welfare, but the troubling expectation that pork producers can regulate themselves. In September, the USDA pushed forward its New Swine Slaughter Inspection System (NSIS) rule, which significantly deregulated the pig slaughter industry and revoked all maximum slaughter speeds.

Previously, a slaughterhouse could kill up to 1,106 pigs an hour. Under the new rule, slaughterhouses are allowed to run the slaughter line at any speed they choose.

The lawsuit challenges this complete revocation of limits on the number of pigs that can be slaughtered per hour, alleging that the USDA is acting in violation of the Administrative Procedure Act, Humane Methods of Slaughter Act, and the National Environmental Policy Act.

The rule change is also being scrutinized under the Federal Meat Inspection Act, as the measure is set to reduce the number of inspectors required at pig slaughterhouses nationwide. Earlier this week, two federal meat inspectors warned that U.S. pork coming from slaughterhouses under the new meat inspection rules is at a heightened risk of contamination. These facilities process more than 90 percent of the pork Americans eat, according to an NBC News whistleblower report.

“The consumer’s being duped,” Food Safety and Inspection Service inspector Jill Mauer told NBC News. “They believe that it actually is getting federally inspected when there’s no one there to even watch or do anything about anything.”

A spokesperson for Animal Outlook, formerly Compassion Over Killing, added: “The USDA has long asserted that its inspections are the most effective way to protect against disease epidemics that could devastate animal populations and threaten public health. Yet, at the same time, the agency is preparing for the possibility of a disastrous outbreak of African swine fever—which is expected to decimate up to a quarter of the world’s pig population—it is replacing its front-line inspectors with untrained and overworked slaughterhouse staff.”

This presents serious food safety concerns for the pork-eating American public. According to Mauer, the “mystery” meat coming from deregulated pig slaughterhouses may be more likely to contain feces, sex organs, toenails, bladders, and unwanted hair. The USDA is considering similar changes for the beef industry.

“The Department of Agriculture is supposed to regulate the meat industry, but this regulation reads like a joint venture between big business and the federal government,” said Cristina Kladis, an ALLC student representing the plaintiff organizations.

High-speed slaughter is linked to increased humane handling violations, including failure to properly render pigs unconscious before they have their throats slit and are dropped into scalding tanks. The agency’s decision to cut line-speeds will also lead to approximately 11.5 million more pigs being slaughtered annually at these massive industrial plants, according to USDA profit estimates for the rule.

In 2015, Animal Outlook investigated one of the five NSIS pilot plants, Quality Pork Processors, which is a Hormel supplier. Inside the high-speed slaughter facility, investigators found horrific animal abuse, as they would at any facility killing more than 20 animals per minute.

Since it became clear they were going to roll out the new pig slaughter rule at facilities nationwide, the group has aggressively campaigned and submitted comments to the agency advocating against NSIS.

“These sensitive, intelligent animals are already largely overlooked by the law, and the USDA has effectively written out the little protections Congress extended to them,” said Delcianna Winders, Assistant Clinical Professor and Clinic Director of the ALLC. “This illegal regulation is a total abdication of the USDA’s statutory responsibilities to millions of pigs and must be overturned.”

For the past year and a half, animal advocates have worked with dozens of other worker, consumer, and food safety groups to block NSIS, but the agency pushed forward, passing the new rule in late-September. Now, they’re fighting back.

“Slaughtering 11.5 million more pigs in these plants will recklessly increase the already overwhelming amount of pollution generated by this dirty industry,” said Hannah Connor, a senior attorney at the Center for Biological Diversity.

“It’s an immoral disgrace that this administration is so blatantly willing to trade environmental health and animal welfare for inflated corporate meatpacker profits,” said Connor.

Correction: A previous version of this article incorrectly stated that The Humane Society of the United States (HSUS) is a plaintiff in the lawsuit. HSUS is not one of the plaintiffs.