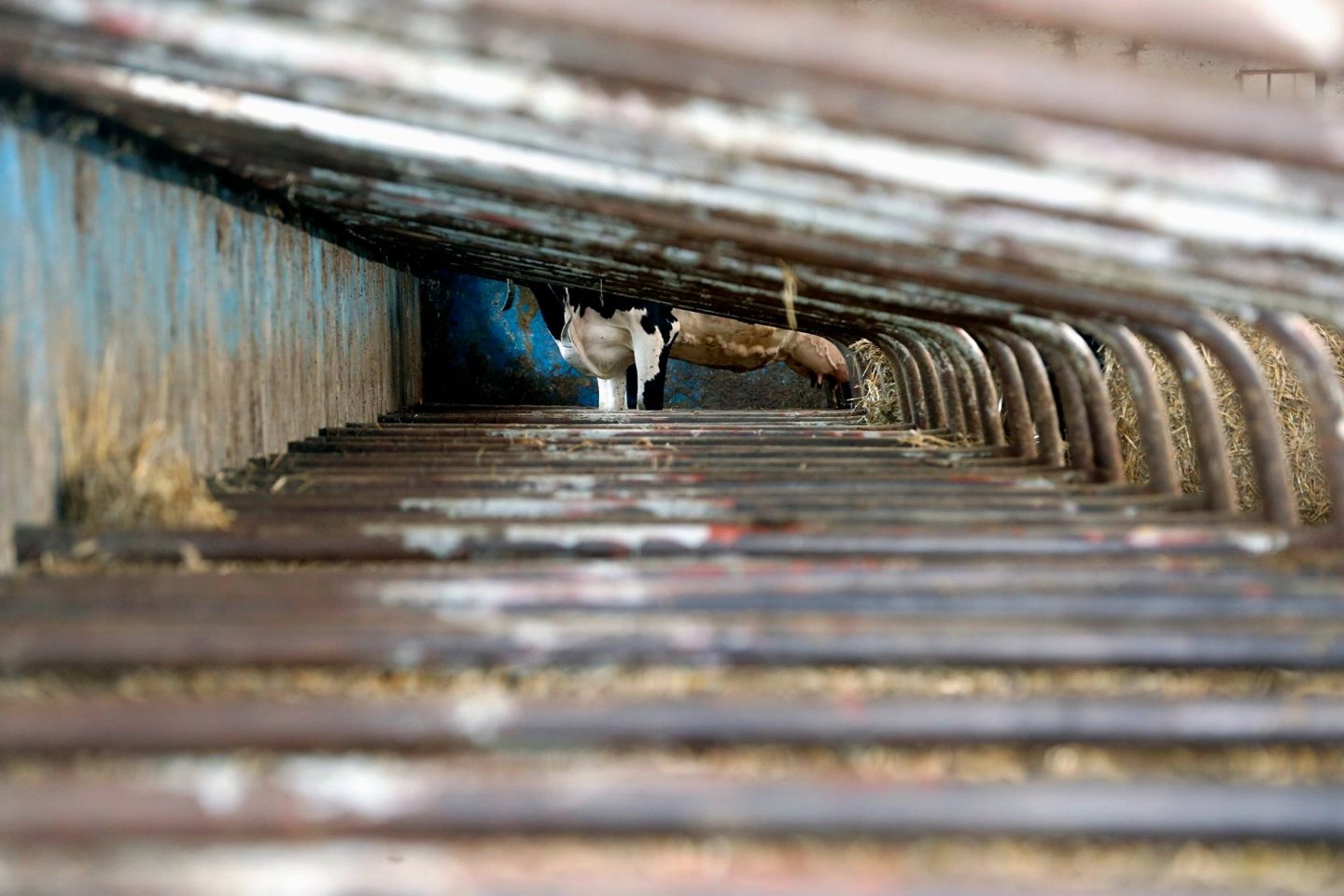 When activists shut down downtown Melbourne, chaining themselves to cars and blocking traffic for hours to raise awareness for the animal suffering happening behind closed doors on factory farms and in slaughterhouses across Australia, they caught the attention of millions of people around the world. In a coordinated effort, a covert group of activists in breathing masks and plastic booties gained access to a slaughterhouse in Queensland and staged a nonviolent, sit-in protest.

The demonstrations were meant to commemorate the one year anniversary of Dominion, the landmark documentary film about animal exploitation on factory farms. The film was viewed 55,000 times in the 48 hours following the protests.

But the federal government quickly shifted the narrative away from the film and came to the defense of farmers, villainizing the activists involved.

“Vigilantes who are entering our farmers’ property illegally are nothing short of domestic terrorists,” said NSW deputy premier John Barilaro. “Our farmers have had a gutful. They don’t deserve, nor have time, to be dealing with illegal trespass and vile harassment from a bunch of virtue-signaling thugs.”

Trespassing on a farm carries an on-the-spot fine of $1,000, according to a new law that went into effect in NSW early last week. The legislation also included an anteed-up Biosecurity Act that could cost organizers upwards of $200,000 for aiding and abetting activists. No doubt, this is just the beginning of the state-sponsored scare tactics.

There has not been a single incident of a biosecurity hazard caused by activists in Australia, despite hundreds of investigations into farms and slaughterhouses, says animal rights group Aussie Farms.

Over the past 40 years, investigators have revealed countless atrocities that would have continued to be an industry secret. Every day, five-day-old male calves are slaughtered because they won’t ever be able to produce milk. Farmers use carbon dioxide gas chambers to sedate pigs before they are slaughtered by the millions. Young piglets, lambs, goats, calves, and chickens are routinely mutilated without anesthetic. These are all problems inherent to the factory farming industry and often invisible to consumers.

“The industry is saying they have the right to operate in secrecy,” said Aussie Farms founder and Dominion director Chris Delforce. “No other business in the world can do that.”

While the new trespassing fines were proposed in the context of recent protest actions inside factory farms and slaughterhouses across Australia, there have only been two such incidents in NSW in recent years. One of the protests took place at a free-range egg farm, where 4,000 suffering hens were held without food and water to increase laying frequency, a common industry practice. The other protest was at a slaughterhouse, where the threat of disease is “surely not applicable to those [animals] who are seconds from having their throats cut,” Delforce said in a statement.

What happens on factory farms stays on factory farms, as long as they can keep activists out. The new Biosecurity Act will help farmers in NSW do just that. It’s being used as an excuse to prevent factory farming operations from being filmed and seen by the Australian public.

When activists illegally enter private farmland, they intend to bear witness and oftentimes, to save lives. But in Australia, where the public perception of animal rights activists is complicated by a farmer-friendly government, it is becoming increasingly dangerous and frighteningly costly for activists to intervene on factory farms and in slaughterhouses.

NSW already has some of the strongest right-to-farm laws in the world. The “right to farm” stems from a desire by farmers to undertake what they deem to be lawful agricultural practices without conflict or interference arising from neighbors and other land users. This state-wide policy extends to farmers who comply with legislation and regulation regarding land use, use of chemicals, intensity and timing of lighting and noise, and management of odors. The policy does not, however, include a single word about the welfare of the animals they farm, which means the right to farm extends to animal farmers and abusers alike.

“We know there is growing anxiety in our communities about animal cruelty in the animal agribusiness industry,” said Emma Hurst, who was just elected to the NSW Parliament with the Animal Justice Party. “There is no protection for these animals outside of laws which the community recognizes are failing.”

The laws intended to protect farm animals in Australia – there are only a handful – were put in place on the state-level to minimize the federal government’s involvement in animal welfare issues. According to the Australian Department of Agriculture, “Australia’s state and territory governments have primary responsibility for animal welfare and laws to prevent cruelty.”

But the Australian government has gone out of its way to protect farmers, doing its part to halt activists at the gates and bury the animal rights movement in fines, criminal charges, and misleading monikers.

Regardless of the level of cruelty happening inside, the second they step foot on a farm, it is the activists, not the farmers, that risk facing criminal charges. But to gain access to a factory farm, first, they have to find it.

This January, Aussie Farms got the attention of farmers when it published a comprehensive map containing the exact location of 5,832 factory farms, slaughterhouses, and other animal exploitation facilities across Australia. The organization hoped the map would encourage the animal agriculture industry, which prides itself on secrecy, to be more transparent.

Direct actions in Australia and abroad are all marked by one thing: the activists’ commitment to nonviolence. But as a result of escalating farmer-activist tension in recent months, farmers have been increasingly hostile towards intruders.

Shortly after the Aussie Farms map was published, a confrontation between a Western Australian dairy farmer and two activists got heated. The farmer demanding they stop filming his animals – who were without shade and appeared to be suffering from dehydration and exhaustion – and leave. When they refused, he grabbed a shotgun and fired two rounds in the air, which he says were meant to scare off any “vermin” that might be threatening his animals. The two activists remained in their car, which was on a public road outside the property.

A few months later, activists broke into a factory farm in Queensland and successfully negotiated the release of three sheep. The direct action there was as peaceful as the demonstration in downtown Melbourne – and as complicated as its aftermath.

The Melbourne demonstration led to the arrest of 39 “green-collared criminals,” Morrison’s particularly inventive name for animal rights activists. At a national news conference following the protest, he flung more insults at activists, calling their actions un-Australian.

Hoping to win over much-needed votes from the country’s $30-billion animal agriculture industry before the upcoming election, Morrison promised to protect farmers, who were growing increasingly enraged by the constant threat of intruders. His promise escalated quickly, turning into a full-fledged attack on animal rights activists.

In the days following the protests, he proposed a new law aimed specifically at people trying to gain access to factory farms using the information provided by Aussie Farms. Under the new law, people who encourage trespassers by posting the location of an agricultural business on the Internet could face up to a year in prison if found guilty.

Delforce said he would rather go to jail than take down the website. For years, he has fought tirelessly to end commercialized animal abuse and exploitation in Australia by educating the public about modern farming and slaughtering practices.

“The simple fact is that what’s happening to animals on farms and in slaughterhouses is intentionally hidden from consumers,” said Delforce. “We believe they have the right to know.”

Aussie Farms has already explicitly stated that they do not condone or encourage the use of the map for illegal purposes like trespassing. But when activists simultaneously showed up at farms and slaughterhouses in three different states, carrying flowers and holding up peace signs to protest animal exploitation, Morrison had a protest of his own. “[Farmers] are being targeted in the most mercenary way by an organization that can only think of itself and not think of the real damage that is being done to the livelihoods of these hard-working Australians,” he told Reuters.

It’s easy to take Morrison’s word for it. Farmers are suffering because of the attention activists bring to their facilities. One goat farm says it was forced to close by sustained bullying from “abusive vegan activists.”

“So, to the thieves, trespassers, and activists; you have won,” said the Gippy Goat Cafe, a goat farm in Victoria. But they’re missing the point. It’s the goats who should be celebrating.

Before closing its doors for good, the Gippy Goat Cafe kept 2,000 goats in stalls, where they would spend their entire lives being milked by machines. The farm welcomed visitors from around the world. Occasionally, dairy companies even flew in Chinese influencers to take photos with the flock. Standard practices like separating baby goats from their mothers, needless to say, didn’t make the photos.

But exposure is a double-edged sword. Where animal rights activists see animals suffering, animal farmers see a profit. The animal agriculture industry in Australia, including beef cattle, dairy, sheep, pig, and poultry, accounts for about half ($30 billion) of the gross value of Australian agriculture as a whole. About 70 percent of this value comes from slaughtered animals. The other 30 percent comes from milk, wool, and eggs.

Australia is second only to the United States in the amount of meat consumed per person. According to Animal Clock, 2.9 billion animals have been killed for food in Australia so far this year – and counting. Their plight is inspiring a movement.

“As long as these facilities exist – unnecessarily breeding animals, using, abusing and brutally slaughtering them without any sort of transparency or honesty – there will be people willing to risk everything to bring it to the public’s attention,” Delforce wrote in an op-ed for 10daily.com.

With activists like Delforce at the helm, the animal rights movement in Australia is quickening its pace. It’s becoming more effective, garnering more support, and meeting more resistance than ever.

The industry and the government are taking notice, but not with a comprise in mind. They’re not even addressing the issue of systemic animal cruelty in the slightest. In place of honest discourse about what’s happening to animals, the government is punishing whistleblowers, enacted industry-favoring laws, and calling anyone who does not abide by them a “terrorist.”

“Every totalitarian government that has fallen has made that mistake of going harder and harder thinking it’s going to stop those who are resisting them,” said Delforce.

It has the opposite effect.

“The more aggressive they become and the harder we fight back, the more people take our side,” he said. “The truth is all we need.”