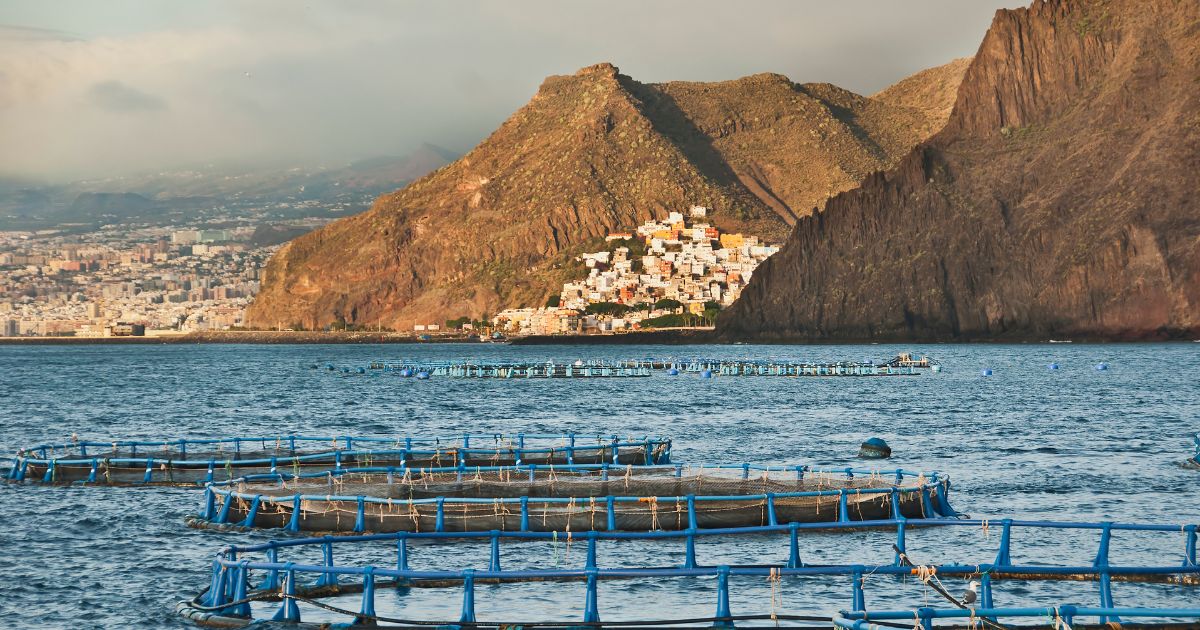 The global aquaculture industry — otherwise known as fish farming — has dramatically increased since 2013. Fish farming has been practiced for centuries, particularly in East and Southeast Asia, and is still a part of the incomes of many smaller farmers in the region. However, modern fish farming arose during the 1970s as the fishing industry realized that it was rapidly depleting wild fisheries and other aquatic ecosystems. The response was to increase fish and seafood production from aquaculture — but is this method of food production good or bad?

Aquaculture is the production of food and other products in water. Though aquaculture may make you think of fish farming, which is its largest component, it also includes the farming of other aquatic animals such as shrimp or oysters, as well as the farming of aquatic plants, notably seaweed. At aquatic farms, operators raise and feed aquatic plants and animals in a limited area, mostly for human consumption. Popular types of finfish who are raised in aquaculture include carp, salmon, tuna, flounder and tilapia.

What Is the Difference Between Fishery and Aquaculture?

Fishery is the general term for the “harvesting,” or catching and cultivation of fish. It covers both the aquaculture industry and the capture fishing industry. In this context, the term fish includes mollusks, crustaceans and any aquatic animals. Harvesting refers to the act of pulling fish from the water to slaughter for food or for any other purpose.

What Are the Methods of Aquaculture?

There are several ways to describe how modern aquaculture is carried out. Two notable ways to cultivate food in aquatic environments are mariculture and integrated fish farming.

Mariculture is the practice of aquaculture in salt water, whether it is to raise finfish, seaweed, shrimp or mollusks like clams and even octopuses — though octopus farming is a very new and highly contentious form of mariculture. Four of the five most produced types of organisms in aquaculture come from mariculture: red seaweeds, brown seaweeds, marine shrimps and prawns, and oysters. These four groups of species make up nearly 40 percent of the world’s total aquaculture production.

Integrated aquaculture is a centuries-old practice of producing aquatic and non-aquatic products in an interdependent system. The traditional Chinese farming practice of integrated fish farming raises fish in rice paddies or grass ponds. The plants get fertilizer-like nutrients from the fish feces, and the fish get a place to live where they can eat grass.

In modern aquaculture, integrated fish farming is seen as a way to use water efficiently. The waste from fish is considered a byproduct that can be used to nourish other farmed products.

What Are Examples of Aquaculture?

There are a range of different ways to evaluate whether aquaculture is good or bad. For example, the impact of fish farming on climate change is an important consideration for people concerned with the impact of global food production on the environment. Farmed salmon, bivalves (like oysters, mussels, clams and oysters), and seaweed all have low rates of greenhouse gas emissions when compared to other types of seafood.

Yet greenhouse gas emissions are just one measure of sustainability. Many small wild fish are increasingly captured to feed farmed fish in order to satisfy surging consumer demand for seafood. Some farmed fish operations are located in ecosystems that can’t accommodate the fish waste or other byproducts of aquaculture.

Eating some types of fish and other sea creatures can also potentially be harmful to human health. A report for National Geographic by David Ewing Duncan found mercury levels in some fish to be so high that eating two meals of large, long-lived fish — in this case halibut and swordfish — more than doubled the mercury levels in the reporter’s blood within 24 hours of ingestion.

What Are the Impacts of Aquaculture?

Much like land-based factory farms, intensive industrial aquaculture operations cram together many animals in tight quarters, which isn’t good for the fish or the environment.

Overcrowding in aquaculture systems can spread disease to farmed and nearby wild fish alike. Compassion in World Farming’s Rethink Fish campaign has criticized overcrowded conditions in many aquaculture operations.

Ecological concerns over fish farming have been documented in both coastal and freshwater communities. In Vancouver, Canada, a local sports fisherman gave testimony to the legislative committee on sustainable aquaculture in 2006 about the impact of salmon farming and its escapees on his life on the coast. He described catching salmon who were severely infested with sea lice:

“The lice that you see on these things are tremendous, and these are full-grown salmon that we see them on. Sometimes some of the fish that you bring in…. Their whole bodies are infested with it. It’s inside the skin on the meat. You see bumps all along the whole body of the salmon.”

The coastal community could see that fish farming was harming their free-living salmon population and gathered to learn lessons from the devastated coastal systems in Norway that had resulted from intensive fish farming.

Taiwan has experienced land subsidence after too much fresh water was pulled from the ground to fill the ponds for intensive aquaculture. Also, taking too much groundwater for use in freshwater ponds can result in the salinization of aquifers.

The aquaculture industry generates significant plastic waste — fish can be farmed using fish cages made from plastic, for example. Some coastal ponds are lined with plastic bags used for growing oysters. Irish oyster farmers will use 30,000 to 200,000 plastic bags for their operations per harvest.

Plastic waste, including waste from aquaculture, has resulted in a permanent set of unnatural, floating islands of plastic debris. These islands are famously referred to as the Great Pacific Garbage Patch and have been compared in size to large masses of land. The plastic breaks down into tiny bits, and much of it is already in the form of small pellets that are the pre-production form of many plastics, known as nurdles. Small bits of plastic like nurdles are capable of soaking up toxins, and even acting as rafts for concentrations of bacteria, posing serious health risks.

The FAO has called for a “blue transformation” — an increase in sustainable aquaculture in order to feed the world’s growing global population. However, critics say calls to increase aquaculture production fail to address the detrimental effects of the global aquaculture industry. There are many examples of unsustainable practices across the world, including overfishing wild fish to feed fish raised in aquaculture operations and overcrowding of fish that results in spreading disease and pollution from fish waste.

As mentioned above, bivalve and seaweed farms are among the types of aquaculture that have comparatively lower greenhouse gas emissions. Yet some commercial bivalve farms have been responsible for disease outbreaks. The process of introducing new types of seaweed farms to an area may negatively affect native habitats and biodiversity.

It is also the case that aiming for sustainability or sustainable development doesn’t automatically mean looking out for animal welfare, or protecting the lives of the vast numbers of sentient aquatic beings killed for human food. In some ways, however, sustainability and animal welfare are interlinked and will need to be addressed together.

Aquaculture in the United States: Statistics