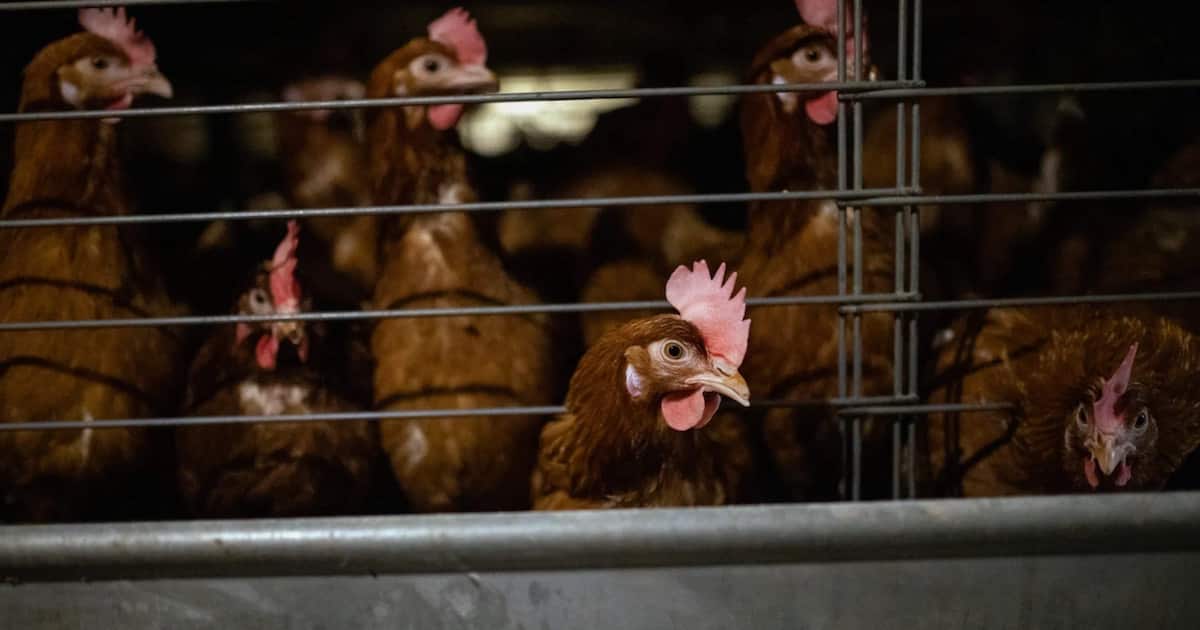 White Veganism Doesn’t Serve Me Either: A White Vegan’s Perspective

Battery cages are widely used for egg production in countries like the U.S., but there’s a good reason that you may not have heard of them before. These cages cause so many welfare problems for hens that farming companies go to great lengths to hide them away from the public. As more people find out about the realities of battery cages, however, demand for cage-free eggs is steadily growing.

Read on to find out what battery cages are, and why they’re not good for chickens or the environment.

What Is a Battery Cage?

A battery cage is used in egg production facilities known as concentrated animal feeding operations (CAFOs), and more commonly as factory farms. Layer hens—meaning chickens who lay eggs—are kept in these cages for the whole duration of their lives, where they lay roughly an egg per day until they are sent to the slaughterhouse.

Battery cages are primarily designed to achieve high density, by being stacked on top of one another. A single egg-producing factory farm may confine thousands of hens at a time in these stacked cages.

Why Do People Put Chickens in Cages?

Battery cages are used in intensive agricultural operations that prioritize productivity and profits, which are achieved by expending the fewest resources per unit of production. In egg production, as with factory farming scenarios involving other species, space is at a premium — so providing birds with as little of it as possible saves companies money. Tightly confining chickens also enables greater control over their bodies, and more control means that less time is required from farmworkers.

The chickens themselves bear the physical and psychological toll of these cost-saving measures, as will be explored further below.

How Big Is a Battery Cage?

Although battery cages come in different sizes, generally they are about the size and shape of a desk drawer, about 67 square inches. Each bird is given so little living space that they cannot stretch their necks upwards or fully open their wings, let alone run, jump, or do anything else a hen might do in more natural settings.

How Many Chickens Are Kept In Battery Cages?

In the U.S., the majority of layer hens are kept in battery cages. According to the United States Department of Agriculture, in the year 2020 close to 74 percent of the national layer hen flock still languish in cages, amounting to around 243 million hens. Fortunately, the share of the cage-free flock continues to increase, albeit slowly.

Cage-free eggs come from hens that are not confined in any type of battery cage. While cage-free environments can look different depending on the farming setup, generally hens will be provided with some space in which to move around and scratch in the litter. Sometimes dust-bathing and perching areas are also provided. While an improvement over battery cages, there remain many welfare concerns associated with cage-free CAFOs, including high stocking densities, air pollution, and the fact that hens are not provided with outdoor space.

Why Are Battery Cages Bad?

Battery cages give rise to many serious welfare concerns that can cause a host of physical and emotional problems in hens.

Chickens are intelligent, curious, and gentle creatures by nature who are used to perching in trees at night to evade predators and wandering over great distances in order to forage for food and explore their territory. Confining any species within what is essentially a small box for the duration of their lives would slowly drive them mad, and this is the case for chickens too.

The interiors of battery-cage barns are dismal for many reasons, including the lighting. These barns do not have any windows, so hens never even get to gaze out at the world they are denied access to. Instead, the barns are lit with dim, artificial lighting to manipulate the hens’ natural laying cycle, which is ordinarily determined by the seasons.

Many chickens lay eggs during springtime when there are more hours of light each day as summer approaches. The evolutionary reason for this is to allow chicks to hatch in the spring, and benefit from the warm months of summer when food is plentiful. Conversely, as daylight hours grow shorter, fewer eggs are produced, since raising chicks in cold weather is more perilous.

By keeping the light constant, typically for 18 hours out of every day, farms can trick the birds’ bodies into a sort of perpetual spring. But the resulting changeless, cave-like conditions are extremely unnatural for chickens.

Chickens normally lead complex social lives, and this is where the term “pecking order” originated. But in the severely restricted conditions of battery cages, the social order entirely breaks down. Hens cannot avoid one another, and dominance hierarchies cannot be safely established or maintained, leading to aggression that hens cannot escape. Beak trimming, described below, is the inadequate response from the egg industry—an attempt to cure the symptom rather than the underlying causes of aggression in chickens.

On CAFOs, factors including high stocking densities, unsanitary conditions, demanding production schedules, and the selective breeding that results in hens producing far more eggs than they would do naturally, all culminate in serious damage being done to chickens’ bodies. The following are some of the more debilitating and painful conditions and mutilations that chickens must routinely endure.

Beak trimming, also called de-beaking, refers to the removal of portions of a chicken’s beak. Often done within the first few hours of a chick’s life, and without any anesthesia, de-beaking is thought to be painful for chicks and can potentially result in chronic pain. This operation is performed to prevent birds from pecking at or eating one another’s bodies—behaviors that are unnatural and directly related to factory farm conditions.

People are told that exercise is critical in maintaining bone health in people, but this wisdom also applies to other animals. Osteoporosis, a condition that can lead to brittle, easily broken bones, is rampant among battery cage hens who are prevented from doing virtually any exercise at all.

The wire cages in which battery hens live cause a host of painful and sometimes fatal foot problems. Hyperkeratosis, where the skin thickens on the feet of hens, is a common problem with battery cage hens that can lead to painful inflammation and lesions.

Overgrown claws are another foot problem. In the wild, hens constantly scratch in the ground and walk on a variety of surfaces that naturally file down their nails. In battery cages there are no such abrasive materials, allowing nails to become overgrown. Curling nails can then catch around the wire floor of the cage, causing tears in the flesh and sometimes trapping the birds entirely, preventing them from accessing food and water and ultimately leading to their death.

Cage layer fatigue is a condition found almost exclusively in battery-caged hens. Thanks to the selective breeding that forces hens to churn out excessively high numbers of eggs, the amount of calcium that goes into making eggshells leeches the mineral from the bones of the hen, weakening the entire skeletal system. In some cases, this disease reaches a point where hens become paralyzed and die of thirst or starvation.

Molting is part of a naturally occurring cycle in chickens’ lives. As the winter season approaches, birds begin to produce fewer eggs, eat less food, and lose feathers that are then soon replaced. Forced molting is a different story. As the birds’ egg production begins to decline, they are starved of food and water for some time, sometimes days. They lose a drastic amount of body weight and many feathers. Many birds also die in the process. When they are fed again, the birds’ bodies return to producing eggs at the maximum rate for a short period—and after this, they are sent to the slaughterhouse.

Damage to the Environment

As with any CAFO, animal waste becomes a huge and dangerous problem. Chicken feces contain many toxic compounds that can contaminate the air and water of the area surrounding these farms. Other impacts of the egg industry, including chicken feed production on deforested land, the use of cleaning products, and transportation also contribute to environmental problems, including climate change.

How Long Do Battery Hens Live?

In backyard flocks, which are far less stressful than any industrial farm, chickens can easily live a decade or more. On factory farms, layer hens live for about two years before they are considered “spent.”

Which Countries Have Banned Battery Cages?

More and more people around the world are coming to understand the significant harm caused by battery cages, resulting in countries taking steps to ban or phase out this farming method. The European Union banned cages in 2012, although enriched cages—cages with very minor improvements—are still used. Other countries that have passed laws regarding battery cages include Bhutan and New Zealand.

Are Battery Cages Legal in the U.S.?

Currently, there is no federal legislation in the United States that makes battery cages illegal. The good news is that many states have taken it upon themselves to enact laws of their own. California, Michigan, Ohio, and Colorado are among the states that are either phasing out battery cages or that have already banned them outright.

Other Examples of Caged Animals

The animal agriculture industry in countries like the U.S. is dominated by factory farming, meaning that many other species face similarly harsh living conditions.

Gestation crates are a particularly extreme example, where female pigs are confined to cages that are not much bigger than their own bodies for the duration of their months-long pregnancies. Gestation crates prevent pigs from even turning around, resulting in boredom, depression, and chronic stress.

Tethered cows are a feature of some dairy operations. Cows are tied to stalls via ropes or chains and remain standing or lying down in the same place for much of their lives. This is a far cry from the lives cows were meant to live, out on pastures where they roam nomadically.

Battery cages give rise to so many welfare problems that there is really no excuse for companies to continue using these devices, nor for food companies to source eggs from factory farms that use cages. As a consumer, the best way you can signal your displeasure about battery cages is to carefully check egg carton labels and ensure that you’re purchasing eggs that are at least cage-free.

There is also a multitude of plant-based proteins you can use to swap out eggs from your diet entirely.

Ultimately, battery cages should be on their way out—and the sooner, the better.