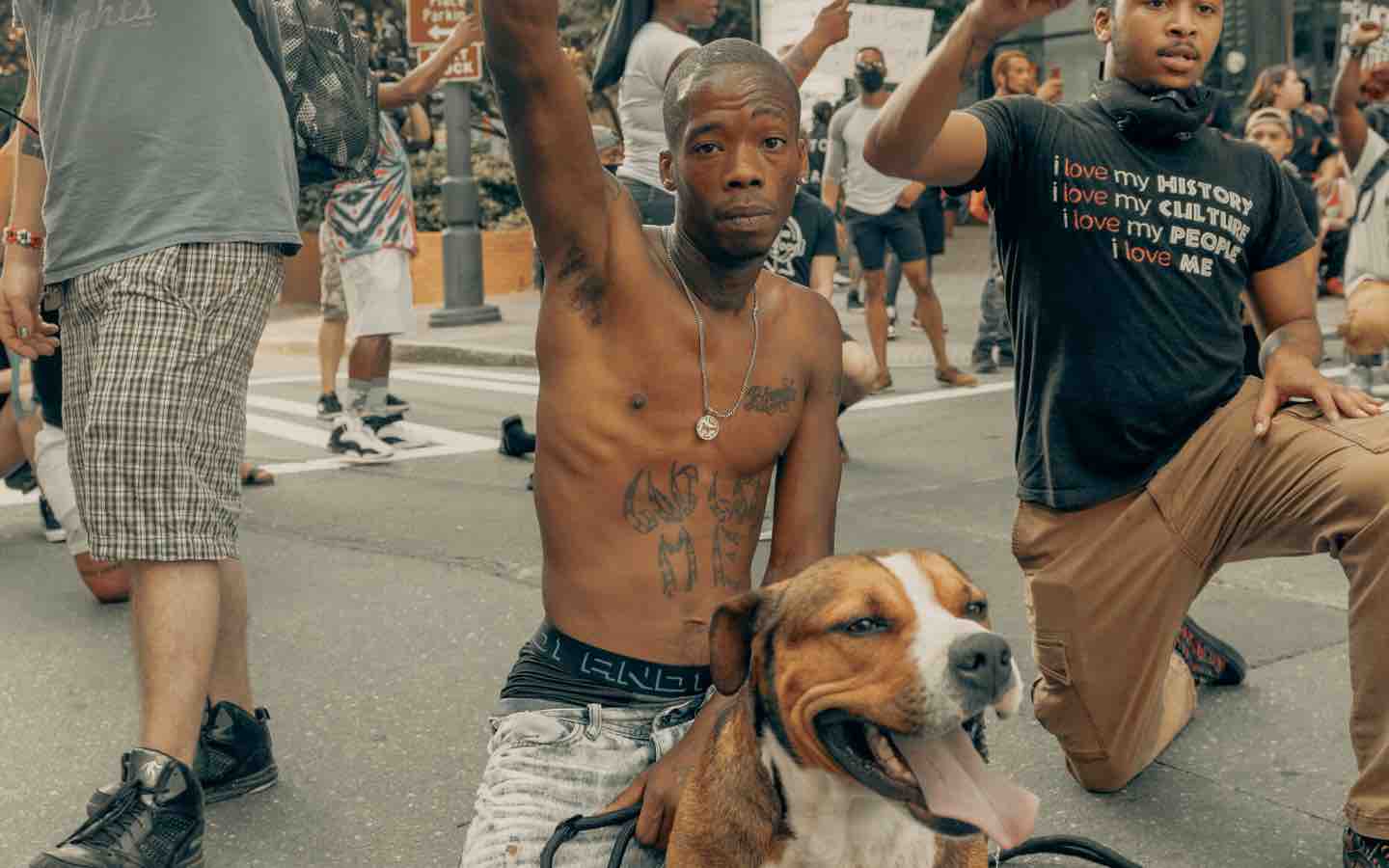 As protests gripped Kenosha, Wisconsin following the police shooting that left Jacob Blake paralyzed, another story broke out almost immediately. Kyle Rittenhouse, 17, drove from Illinois to Wisconsin with a rifle and allegedly shot three protestors, killing two and injuring one.

Social media exploded. Stories were being shared everywhere. Some people expressed their shock over the deaths. Others expressed grief. But something else was also happening.

Under a Facebook post dated August 29, describing the reaction of Kenosha Police Chief Daniel Miskinis, Facebook user Laura Mills posted a photo and commented, “Peaceful protestor chokes puppy…….He should have been one of the three!”

Shocked, another user Kristy Johnson replied asking, “So the kid should have murdered more people?”

A reverse image search on Google revealed that the photograph Mills shared was doctored. Furthermore, it led to additional stories that debunk claims that the man in the photograph killed the dog. Perhaps most bizarre of all is the fact that Mills had determined, based on no evidence whatsoever, that the man had both molested children and sold drugs.

In fact, Mills decided that not only was an unrelated Black man—hundreds of miles away from Wisconsin altogether—guilty of several crimes, he deserved summary execution at the hands of an armed 17-year-old.

This story doesn’t happen in isolation. It’s part of a disturbing trend.

People are invalidating Black opposition to state violence by using stories of animal abuse to delegitimize protests. And the truthfulness of some stories is questionable at best. In this universe, where urban legend is as good as verification, rumor becomes fact.

An image of a police horse allegedly injured by a protester surfaced in late May. Absent of any context, social media users have placed this horse all over the United States from Ohio to Texas. The narrative chosen depends on who is telling the tale. The only constant seems to be that the innocent horse was violently attacked by people described as everything from leftist racists to human garbage.

It doesn’t much seem to matter whether or not horses are being forced into service at the hands of the state. It only matters that an allegation can be made that an animal was injured by the protestors.

Facebook user Mitzi Ocean shared a story from the website Newspunch, about a raccoon who was beaten to death by a group of men. She wrote, “That BLM and their supporters have a number of times attacked and even killed both human and animal, prove they have no regard for life and that fact delegitimizes them. The Peaceful Great Activists like Dr. Martin Luther King jr. and Gandhi would be appalled. Violence begets violence. They loose [sic] their right to the ‘Victim’ card if they themselves become the murderers of the innocent!!”

On their own merit, Ocean’s words don’t really make sense. State violence against Black people isn’t nullified by individual acts of Black violence against animals any more than gendered violence is mitigated by homophobia. Groups can (and do) occupy multiple identities. It would be equally absurd to argue that white women shouldn’t have voting rights because some white women are racist.

Having started as a decentralized organization in 2013, popularized by the kneeling of athletes like Colin Kaepernick, it’s hard to argue that Black Lives Matter (BLM) has not existed as an overall peaceful movement for years, with a sharp spike in media attention following the death of George Floyd in May 2020.

But whether protests are peaceful or violent is irrelevant. As the Washington Post points out, public perception is what matters. And one of the easiest ways to demonize a group is to play on the media trope that bad people abuse animals.

The decentralization of BLM is also very important to observe here. When right-of-center websites framing themselves as alternative news sources infiltrate the social media apparatus with stories of individual acts of animal abuse, decentralization makes it much easier to use isolated acts interchangeably with the whole ‘organization.’

And the use of animals as victims is extremely intentional. Dr. Corey Wrenn, a sociologist at the University of Kent, said:

Nonhuman animals play a symbolic role in our anthropocentric culture. Rather than view them as individuals and persons with their own rights and interests, they become politicized weapons for advancing ideologies of domination. Psychological research supports that those with more conservative/right-leaning value systems are far less likely to support vegetarianism, veganism, or animal rights. Thus, when the right campaigns against social justice causes on grounds of animal welfare, we have reason to be suspicious as to their underlying strategy.

Wrenn’s point is proven over and over again. If society had consistent attitudes about animal abuse, these types of misinformation campaigns would be much more difficult to politicize. Every single person who eats a hamburger would be forced to reevaluate their position. But societal attitudes about animals are completely subjective.

Some people might relegate stories like this to the periphery or otherwise claim they’re unimportant. But it would be unwise to discount them. It’s easy to assume that the goal of right-wing propaganda is to get people to like all the same things that right-wing extremists like. But that’s an unrefined view of the way propaganda works. Radicalization is a process.

Sometimes the goal is to make people hate the same people you hate. You don’t have to believe in right-wing extremism to think animal abuse is unacceptable. And if you read an article from an unvetted website that says Black people abuse animals, you might be convinced to think that Black lives do not, in fact, matter. Not because you hate Black people, but rather because your empathy was diminished by people who instrumentalize your natural love for animals.

To the purveyors of disinformation, that’s a victory. Ask Ms. Mills and Ms. Ocean.