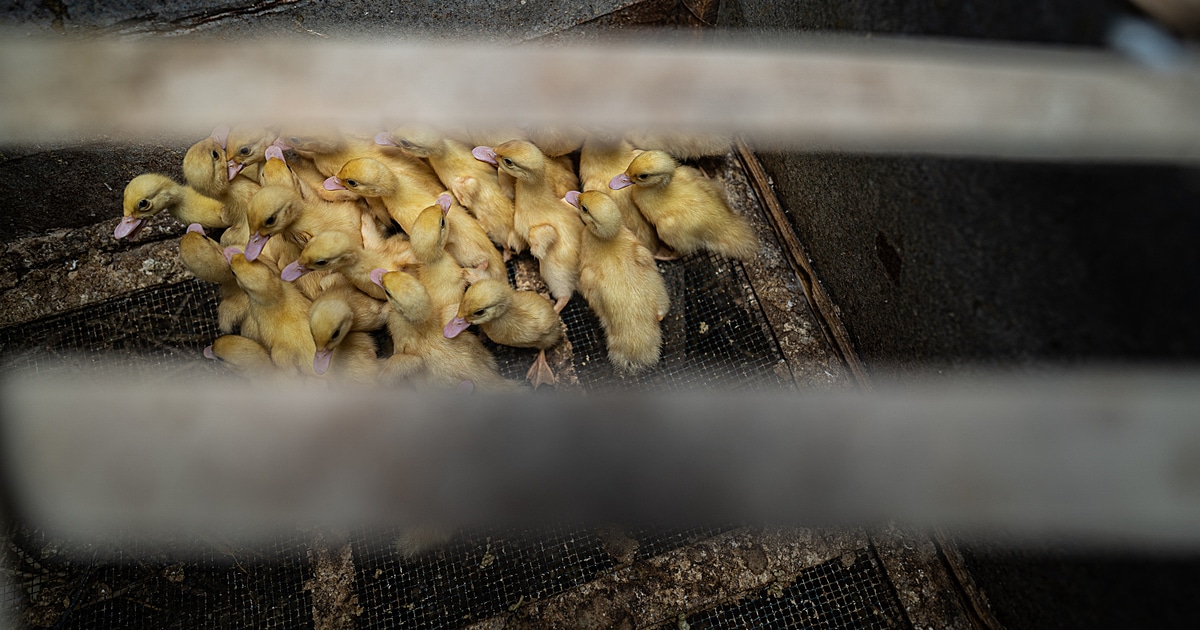 The Future of Beavers Depends on Learning Lessons From the Past

Earlier this month, five billboards with the message, “Go vegan for duck’s sake,” appeared across England, reaching a combined total of more than half a million people. This comes as the latest in a new campaign by animal rights NGO Animal Justice Project (AJP) to make duck farming a thing of the past.

Unbeknown to many consumers, the vast majority of farmed ducks in the UK are intensively raised indoors with barely any water in sight. A single shed typically holds between 6,000 and 13,000 ducks.

“We are calling upon the [UK] government to ban this cruel industry,” said Ayrton Cooper, AJP’s Campaigns Manager. “There is no place in Britain or anywhere else for it.”

The billboards, which were in Birmingham, Derby, Nottingham, Reading, and Wolverhampton for two weeks, also claimed that “UK duck farms violate the Animal Welfare Act by preventing natural behaviours.”

Under Section 9 of the UK Animal Welfare Act 2006, a person must take “reasonable” steps to meet the needs of any animals under their care “to the extent required by good practice.” This includes the animal’s “need for a suitable environment,” and “need to be able to exhibit normal behaviour patterns.” Based on the fact that most farmed ducks are denied access to water for swimming and bathing, AJP believes that duck farming is “at odds with” this legislation.

“The Animal Welfare Act was put in place to supposedly protect farmed animals, yet millions of commercially farmed ducks held in vast, industrial sheds within the UK are not afforded even the most basic protections,” said Cooper. “This is despite clear acknowledgment by scientists that ducks should be provided with open water as well as a sound legal basis to require this.”

But duck farming has been allowed to continue thus far for selfish reasons. “Sadly, animal welfare law is often predicated on the commercial needs of industry, which in this case is the duck farming industry,” Edie Bowles, lawyer and co-founder of the nonprofit law firm Advocates for Animals, said in an AJP press release. “However, it is difficult to understand what normal behaviours the law is trying to protect, or the suitable environment it is trying to provide, if access to water for aquatic birds like ducks is not required.”

Left to their own accord, the UK’s top duck producers do not appear to have any real intentions of improving the lives of farmed ducks. It could even be argued that the conditions inside duck factory farms have deteriorated in recent years.

In 2010, approximately half of all ducks reared for their flesh in the UK were purportedly raised in accordance with the Royal Society for the Prevention of Cruelty to Animals (RSPCA) Freedom Food Scheme, which requires that ducks have full body access to open water.

That same year, the poultry industry launched its own Duck Assurance Scheme (now run by Red Tractor), which instead requires that ducks have only enough water to dip their heads into. Duck producers started to switch schemes, and by 2014 the number of ducks farmed to the RSPCA’s welfare standards had fallen to virtually zero. The RSPCA now states on its website that “there is no duck meat currently available in the UK that can be considered acceptable on animal welfare grounds.”

The poultry industry has a different perspective. Farmers believe that giving their ducks full-body access to open water would facilitate the spread of disease. “[Ducks] do not know the difference between drinking water and toilet water,” Dr. Andrew Ballantyne, commercial farms manager at Gressingham Foods, the UK’s largest duck producer, told Farmers Weekly in 2019. He claims that for this reason, “preventing full-body access to drinking water is far better for the birds’ health.”

But as far as campaigners are concerned, there’s an obvious solution to any biosecurity concerns or other difficulties presented by giving ducks raised indoors access to open water: Don’t farm ducks.

Why it’s so hard to implement change

Animal rights groups like AJP believe that welfare standards and laws will never be enough to protect farmed animals. But even if they were, the meat industry has a poor track record when it comes to complying with the limited regulations that do exist. Gressingham Foods—which churns out roughly eight million ducks per year—is no exception.

The new campaign comes after more than 71,000 people signed a petition calling on the Crown Prosecution Service to take action against Gressingham Foods over alleged law-breaking. Secret filming by AJP inside a Gressingham Duck slaughterhouse in September 2020 revealed, among other things, that on one occasion at this facility, ducks were left shackled upside down for fourteen minutes. Under animal welfare law in England, conscious ducks must not be hung on the shackle line for any more than two minutes.

Following the release of the secret footage, an analysis of Food Standards Agency data by Sentient Media revealed that Gressingham Foods’ facilities had been breaching welfare standards for at least six years prior to the investigation.

Gressingham’s track record points to a major reason why it’s so hard to implement change in factory farms: that those who are responsible for the conditions inside these facilities are often the same ones asked to fix them. When faced with criticism, managers of factory farms tend to deny the allegations, say they will investigate, or let the blame fall on low-paid employees, and then continue running the farm as usual.

When asked for comment for this story, a spokesperson for Gressingham Foods said: “We are committed to upholding excellent farming and processing practices, which adhere to stringent ethical standards and ensure the welfare of our animals. Our farms and factory are subject to some of the world’s highest regulatory standards in food production from DEFRA [the Department for Environment, Food and Rural Affairs] and APHA [the Animal and Plant Health Agency]. Everything we do is open to regular auditing and review from external parties, including our retail customers and Red Tractor.”