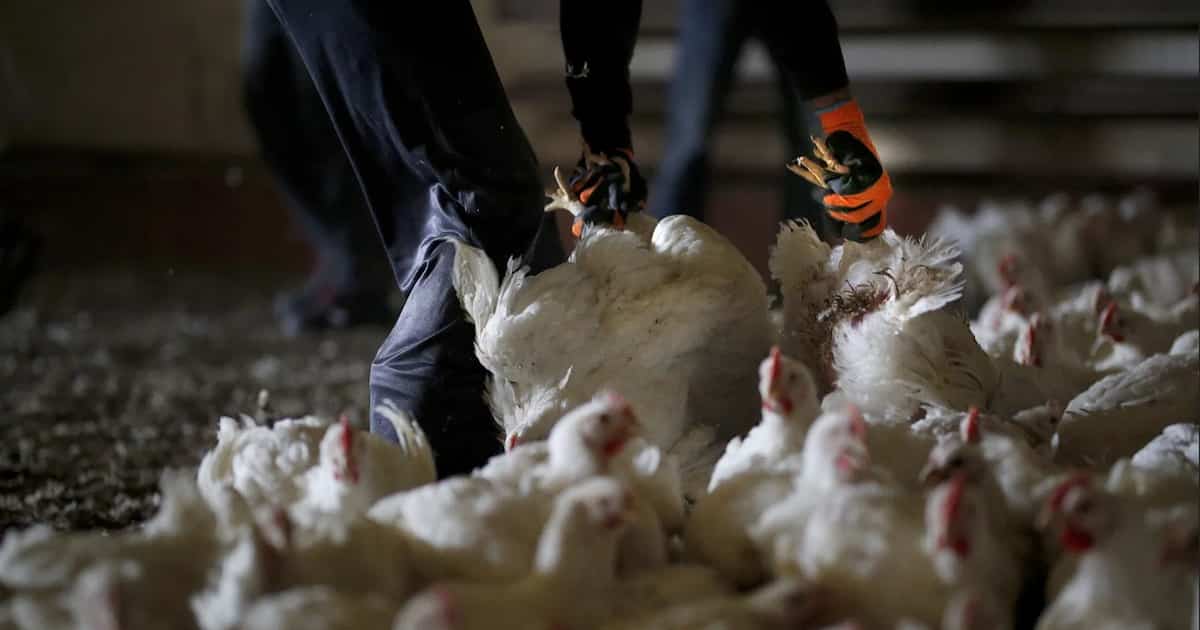 There’s no doubt that the discovery of antibiotics and their immense capabilities to combat and destroy bacteria and infection was one of the most significant advancements in human history. It is estimated that antibiotics save around 200,000 lives per year in the United States, as well as increasing life expectancy by 5-10 years at birth; in World War II alone penicillin saved millions of lives.

Chickens are by far the most numerous animal on the planet, with around 23.7 billion of them raised for meat and eggs in 2018, and are therefore the heaviest consumers of antibiotics in the world.

Why Are Chickens Given Antibiotics?

There are two major reasons why chickens are given antibiotics. The first is to encourage weight gain and growth promotion after scientists discovered that chickens fed B12 grown from antibiotic residue grew fifty percent faster than other chickens. Today, the use of antibiotics to encourage growth in chickens is becoming more and more regulated and is prohibited in the EU, the U.S., and the U.K. However, much of the world continues to pursue these techniques.

The second and primary reason for antibiotic use is to keep animals healthy, or healthy enough to gain enough weight before slaughter. Chicken antibiotics are administered in bulk because industrial chicken farms function much like bacterial soups. They are perfect incubators for disease. Battery chickens are crammed into cages the size of an A4 sheet of paper which creates enormous heat stress, and these putrid conditions are excellent breeding grounds for bacteria like E. coli and salmonella which can be deadly without the help of chickens antibiotics.

Additionally, chickens are far more susceptible to catching diseases in this environment due to their suppressed immune systems. In nature, chicks wander around their surroundings, pecking at feces and other sources of microbes in the natural world, which builds up their antibodies and strengthens their immune system. This is not possible in the confines of a bare wire cage.

Fundamentally, the administering of chicken antibiotics is done for the profit of farmers, who desire large and bulky birds that don’t prematurely die of disease and cause them financial loss. Antibiotics also allow farmers to keep chickens in the enormous numbers that they do—as many as 20,000 per building and in squalid conditions.

Antibiotics are therefore a mechanism by which low animal welfare standards can be maintained for the benefit of cheap prices for consumers and big revenues for farmers.

What Antibiotics Are Used on Chickens?

Some of the major antibiotics used in chicken farming are:

What Do Antibiotics Do to Chicken?

Antibiotics allow chickens to be kept in crowded and immobile conditions, transforming the birds from dynamic, sociable, athletic explorers into crippled blocks of protein. The growth of antibiotic resistance in chicken farms also means that the bacteria found on store-bought chickens, like campylobacter, salmonella, or E. coli, is more likely to be antibiotic-resistant.

Bacteria do not pose a problem to one’s health if the chicken is thoroughly cooked, but severe poisoning caused by undercooked chicken would become dangerously untreatable. These bacteria can be deadly, particularly to young and elderly people with vulnerable immune systems.

Although this is less of a problem in the U.K., the EU, and the U.S., elsewhere there is a chance that antibiotic residue will be consumed in the meat of the chicken. This is a huge health concern, as it means that small doses of chicken antibiotics will be constantly eaten by human consumers which can lead to an increase in antibiotic resistance among human microbes.

In one study, evaluating chicken farms in Lebanon, over three-quarters of all chicken flesh contained residues. Without strict procedures for the elimination of residues from chicken meat, this will remain yet another pressing contributor to the emergent health crisis of antibiotic resistance.

Are Human Antibiotics Used in Chickens for Weight Gain and Growth Promotion?

This practice has been banned for some time in the EU and U.K. and as of 2017 has been banned in the USA as well. However, worldwide this practice is still infrequent use. India is a leading offender in this regard, as it still uses colistin on chickens to promote rapid growth, receiving hundreds of tonnes of chicken antibiotics in 2018 with the government refuses to impose regulations.

China is the world’s largest consumer of antibiotics, and its chicken farming industry has not banned the use of growth-promoting chicken antibiotics. Additionally, a recent study suggests that, although the Chinese government has banned medically important antibiotics for use in agriculture, the majority of chicken farms continue to use these banned variants.

Who Regulates the Administration Of Chicken Antibiotics in the U.S.?

Another crucial change was the requirement of medically important antibiotics to be prescribed to animals by a vet rather than being bought over the counter. This does represent some significant progress, yet there are question marks about whether or not these measures go far enough.

The guidance regarding phasing medically important drugs out of animal feed is emphatically non-binding and voluntary. The regulations also contained exploitable loopholes, which have allowed large amounts of medically important antibiotics to remain in agricultural use. This suggests that as long as the use of chicken antibiotics and other antibiotics remains profitable in animal farming, then ways will be found to use them, even if they are attained by chicanery and lead to irresponsible outcomes.

What Is Antibiotic Resistance?

Antibiotic resistance is when bacteria subjected to antibiotics mutates in response to the treatment, developing resistance to the medicine instead of being killed by it. A process of natural selection sets in; because the non-resistant strains are killed by antibiotics, only the antibiotic-resistant forms of bacteria are left to proliferate. These types of resistant bacteria are immune to treatment, making them far more dangerous when infecting the human body. When such germs develop in animal agriculture they can spread to humans through meat, dairy, and eggs or out of farms through the air, soil, or waterways.

Are Antibiotics in Chickens Bad for You?

It is not the chicken antibiotics or the meat that is the concern, but the antibiotic-resistant bugs which are generated in factory farms and can spread to human populations through pollution, in packaging, or on farmworkers. This could result in humans catching potentially severe infections untreatable by antibiotics.

A large-scale outbreak of an antibiotic-resistant “superbug” would be catastrophic, catapulting us back into the pre-antibiotic age of medicine where death from microbes was commonplace. Research from the WHO suggests that at the current rate antibiotic resistance is developing this would manifest itself globally into 10 million yearly deaths from infection and disease, surpassing cancer as the number one global killer, and the economic devastation wrought by ensuing health conditions would force 24 million people into extreme poverty.

To provide a concrete example of how the relationship between the animal farming industry and chicken antibiotics could have disastrous results for human health, take a look at campylobacter. Campylobacter is a type of bacteria and is the leading cause of gastroenteritis and diarrhea, normally experienced as food poisoning, accounting for a quarter of global cases. American chicken farmers feed fluoroquinolones to chickens via their drinking water targeted at killing the more potent bacteria E. coli. Yet this treatment does not kill all the campylobacter, which developed resistance, and now 21 percent of campylobacter infections in the U.S. come from antibiotic-resistant strains.

Campylobacter infection can be deadly amongst infants, the elderly, and the immunosuppressant. This same process of antibiotic resistance could develop in more deadly bacteria and resistance can form against more crucial antibiotics, a process which could make every broken bone, tooth removal, surgery, or paper cut pose a mortal risk of untreatable infection.

Indeed, thousands of tonnes of antibiotics critical for human medicine like colistin, which is used to treat pneumonia, are shipped overseas to unregulated farming industries in India, Vietnam, Russia, Mexico, Colombia, and Bolivia. If such vital antibiotics as this were to be rendered ineffective by microbial resistance, the resulting deaths would be severe.

What Does the CDC Say About Antibiotics Resistance?

The Centers for Disease Control and Prevention (CDC) states that it “is concerned about rising resistant infections in the community, which can put more people at risk, make spread more difficult to identify and contain, and threaten the progress made to protect patients in healthcare.”

The CDC explains that it is investing in testing and laboratory infrastructure to detect the emergence of antibiotic-resistant bacteria and promotes vigilant surveillance of such threats as well as judicious antibiotic use in human and animal settings. However, as a consumer, there are only one sure-fire means of withdrawing support for use of antibiotics in animal agriculture. Refraining from purchasing animal products is a start.

In 1950, when it was first unearthed that feeding chickens with B12 and antibiotics would increase their growth by 50 percent, a reporter for Science News Letter claimed that the discovery “cast the antibiotic in a spectacular new role” for the “survival of the human race in a world of dwindling resources and expanding populations.”

Antibiotics remain essential to the survival of human beings and, as such, their mass-use in animal agriculture must end. The more humanity splurges its antibiotics on chicken farming, and other forms of animal agriculture, the quicker we charge towards a post-antibiotic world where going to the hospital for a simple procedure could be deadly.