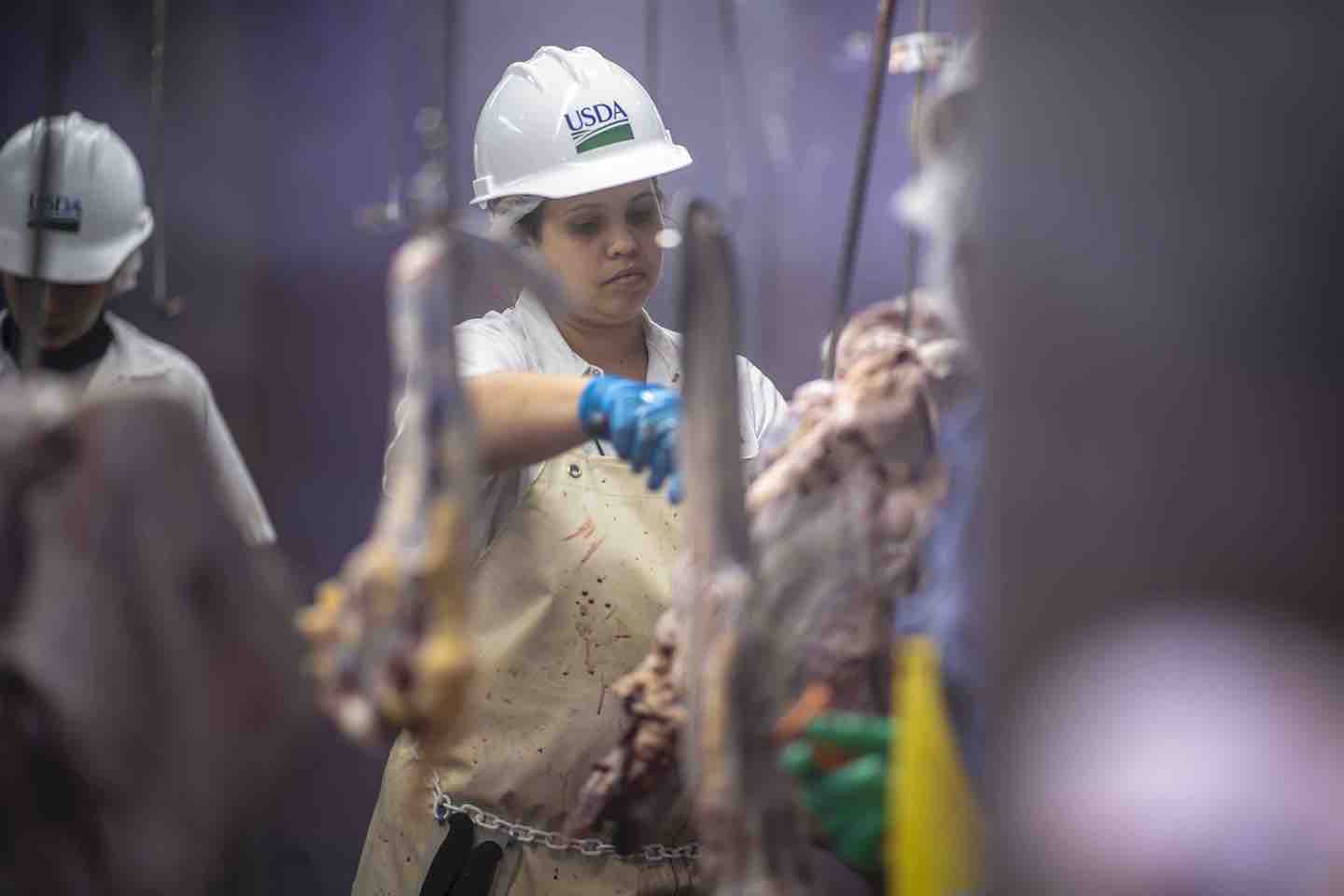 Workers stand shoulder to shoulder in a freezing room. Workers cut and clean 5,000 cattle carcasses every day. The fast pace of the conveyor belt, which requires workers to stand side by side to carve the carcasses, makes social distancing almost impossible. The difficulty of the labor makes keeping on a mask difficult—though most of the employees are not given masks to begin with. Under these conditions, COVID-19 spreads quickly.

The majority of people put on the front lines in slaughterhouses are Black Brown Indigenous People of Color (BBIPOC) and immigrants. At companies such as Tyson, Cargill, and Smithfield Foods, the employees who work some of the most demanding, underpaid jobs in the country are currently facing significant health risks.

A CDC disparity report, published July 7, 2020, found that 87 percent of COVID-19 cases at slaughterhouses occurred among racial minorities. The report found that Asian and Hispanic workers faced the brunt of the threat. This isn’t because BBIPOC are less cautious, but because of the structural racism endemic to meatpacking plants. This structural racism places white folks in safer managerial positions and BBIPOC in front-line work.

In addition to pervasive structural racism, the poor response to COVID-19 by big meat companies is also emblematic of speciesism, a concept that humans are superior to the animal ‘Other,’ which leads to the exploitation of nonhuman animals. This lack of care for nonhuman animals is apparent in the recent mass killings of farmed animals related to COVID-19. Farms are being forced to kill millions of animals because they are no longer profitable. This is a perfect example of speciesism. Instead of seeing animals as “someone,” they view them as “things,” making it easier to enact violence against them.

The racism and speciesism illustrated by the industry’s response to COVID-19 are intimately entangled. Writer Leah Kirts has argued in the anthology Queer and Trans Voices: Achieving Liberation Through Consistent Anti-Oppression that both farmworkers and animals are exploited in similar ways. She contends that speciesism is integral to the marginalization of and normalized violence against those who are racially “othered.”

Activist-scholar Julia Feliz calls this concept “racialized speciesism.” They contend that BBIPOC have been “animalized” and “otherized” by white supremacist culture to “establish … hierarchies of inequality and oppression.” Kirts’ and Feliz’s sentiments are echoed by other activist-scholars like Dr. A. Breeze Harper and Christopher Sebastian, who have written on the interconnections between speciesism and white supremacy.

“A serious commitment to anti-racism will involve a deep commitment to animals,” and vise versa, according to activist-scholar Syl Ko, co-author of the book Aphro-ism: Essays on Pop Culture, Feminism, and Black Veganism from Two Sisters. Because, as Ko explains, speciesism has a socio-political impact—it not only harms animals but also works with white supremacy to dehumanize BBIPOC.

What it means to be human, versus what it means to be an “animal,” is influenced by white supremacy. Ko contends that if to be human is, at its perceived best, “an expression of whiteness,” the “animal” is anything that deviates from that. She argues that in order to decolonize oneself from the white supremacist logic that “posits the ‘human’ as whiteness,” one must also dismantle one’s internalized speciesist logic—that to be human is superior to being an animal. This has led us to value white lives over BBIPOC lives and the lives of humans over other species.

Now, animal welfare groups are recognizing that the oppression faced by animals in factory farming also extends to the marginalization faced by slaughterhouse workers. In July, the Animal Legal Defense Fund (ALDF) launched a whistleblower campaign to report COVID-19-related abuses towards animals and humans, focusing on the mass killing of animals during the pandemic, as well as issues of worker safety. PETA has also demanded greater worker protections, such as slowing the speed of the cutting line and giving more space between slaughterhouse workers.

“It’s not only animals—slaughterhouses can be deadly for workers, too,” says PETA Latino.

The fights for more equitable treatment of marginalized humans and animals, to be effective on either front, must address both speciesism and racism. Coalitions are already forming between animal, labor, and environmental organizations and groups. The environmental and animal advocacy group Food and Water Watch and poultry worker rights organization, Venceremos, together filed a complaint to the Federal Trade Commission alleging that Tyson is misrepresenting workers’ safety. In June, facing nearly 100 slaughterhouse worker deaths related to COVID-19, the Iowa chapter of the League of United Latin American Citizens (LULAC) called for Americans to boycott meat. The chapter asked consumers to stand in solidarity with workers who it claims are “being forced into a death march by an administration and an industry that place profit over lives.”

Since April, COVID-19 has brought international attention to the poor conditions faced by workers and farmed animals, but this is not a new phenomenon. Big Ag companies have historically endangered the most marginalized individuals in a quest for profit. Meatpacking workers have one of the most dangerous jobs in the world and the industry has regularly denied employees bathroom breaks and threatened deportation when workers voice their concerns, which often results in emotional abuse and humiliation by managers.

Previous investigations of meatpacking plants further illustrated how companies have routinely prioritized profits over workers’ safety and public health. The industry also normalizes violence against factory-farmed animals, which account for 99 percent of animals raised for food in the United States. On these farms, animals are crammed into confined spaces, bred for quick and painful growth, and slaughtered for food at a fraction of their natural lifespan.

During COVID-19, companies have illustrated that not only do animals’ lives not matter to them but that the lives of their workers are also considered disposable. Despite the persistent threat of the pandemic, meatpacking workers dependent on their meager wages risk their lives in slaughter facilities. As outbreaks continue to disproportionately affect immigrant and BBIPOC slaughterhouse workers, it is paramount to acknowledge how racism and speciesism are inherently connected. To fight against the oppression of meatpacking workers, we must also simultaneously fight against the normalized violence against farmed animals.