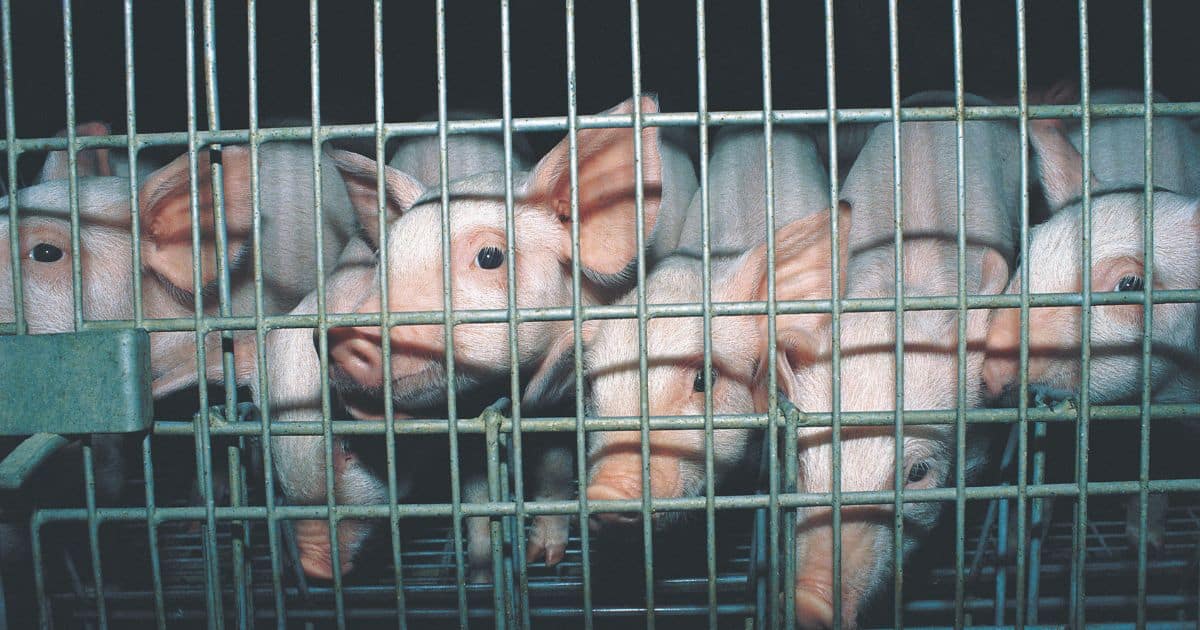 While it might be tempting for some to believe the meat on your plate comes from some idyllic version of a family farm — the kind depicted in childhood stories like Charlotte’s Web or Babe — the reality in the U.S. is very different. Today, the vast majority of our meat comes from large-scale operations, what are often called “factory farms.”

In the U.S., more than 21,000 of these industrial operations raise and slaughter billions of livestock animals each year to satisfy our insatiable demand for cheap meat. But cheap meat comes at a cost — the animals raised in these production systems can experience broken bones, uncomfortably small living space and high levels of stress, to name just a few examples. So just what is a factory farm? And why is the most common source for meat and dairy in this country so bad for animals?

Just What is a Factory Farm?

While exact origins of the term are unknown, historians say researchers began talking about “factory farms” much more frequently by the mid-20th century. The idea was to encourage farmers to run their operations in ways that maximized speed, profit and efficiency, just like a modern factory. Within a matter of years, this “Big Ag” style of farming was becoming the norm, encouraged by President Nixon’s Secretary of Agriculture, an agronomist named Earl Butz who famously urged farmers to “get big or get out.”

In the animal farming business, factory farms are regulated as “concentrated animal feeding operations,” also known as CAFOs. These facilities raise hundreds and as many as thousands of livestock animals at any given time, all confined to what are typically crowded and uncomfortable spaces.

On factory farms, animals live brief lives. Pigs and chickens live as long as just a few weeks to several months. Dairy cows live longer, but spend most of their lives standing for hours on concrete floors. Beef cattle “finished” on large-scale feedlots get to spend as much as half of their early lives on open pasture, yet even they live only about 18 months at longest, and their production is responsible for wiping out wildlife and driving up climate emissions.

Here are some of the most striking examples of animal suffering on factory farms:

About half of all calves born on dairy farms are killed simply because they are born male and can’t produce milk. These unwanted male calves are slaughtered for veal at anywhere from a couple of weeks to just under a year old.

2. Cages the Size of a Piece of Paper

In the U.S., around 80 percent of layer hens are still kept in battery cages typically sized anywhere from 67 to 86 square inches per bird, or less than a standard sized sheet of printer paper. One 2020 study found 97 percent of hens all had at least one keel bone fracture, a condition that causes pain and can inhibit the animal’s natural movement.

In the U.S., baby piglets are typically castrated at just a few days old — their testicles surgically removed without anesthesia. During the procedure, the piglet is restrained as their scrotum is cut open with a scalpel to pull out and remove the testicles.

5. Raising Cattle for Beef is Destroying the Amazon

Beef cattle have more access to space and live longer than most other factory farmed animals, yet our appetite for cheap beef has other damaging impacts to animals — namely the wildlife populations that are wiped out, contributing to biodiversity loss. Cattle ranching is the number one driver of deforestation in the Amazon rainforest in Brazil, and the U.S. is one of the biggest purchasers of beef sourced from that region. In 2021, 320 million pounds of beef from cattle raised in Brazil ended up on U.S. plates.

The standard housing system for pregnant pigs are gestation crates usually 7 ft by 2 ft. These crates provide only enough space for the animal to stand, sit and lay down but not enough room to turn around. About a week before she is due to give birth, the mother pig is moved to a farrowing crate that allows her piglets access for feeding, yet these are not much bigger. Researchers have found that these crates can be detrimental to the wellbeing of mother pigs and their piglets. The pork industry continues to insist farrowing crates are necessary to prevent mother pigs from crushing their piglets, despite the existence of roomier alternative systems.

If you want to reduce the amount of suffering caused by what’s on your plate, shift as much as possible to a plant-rich diet. Find out more about how to make that transition by visiting our Take Action page here.