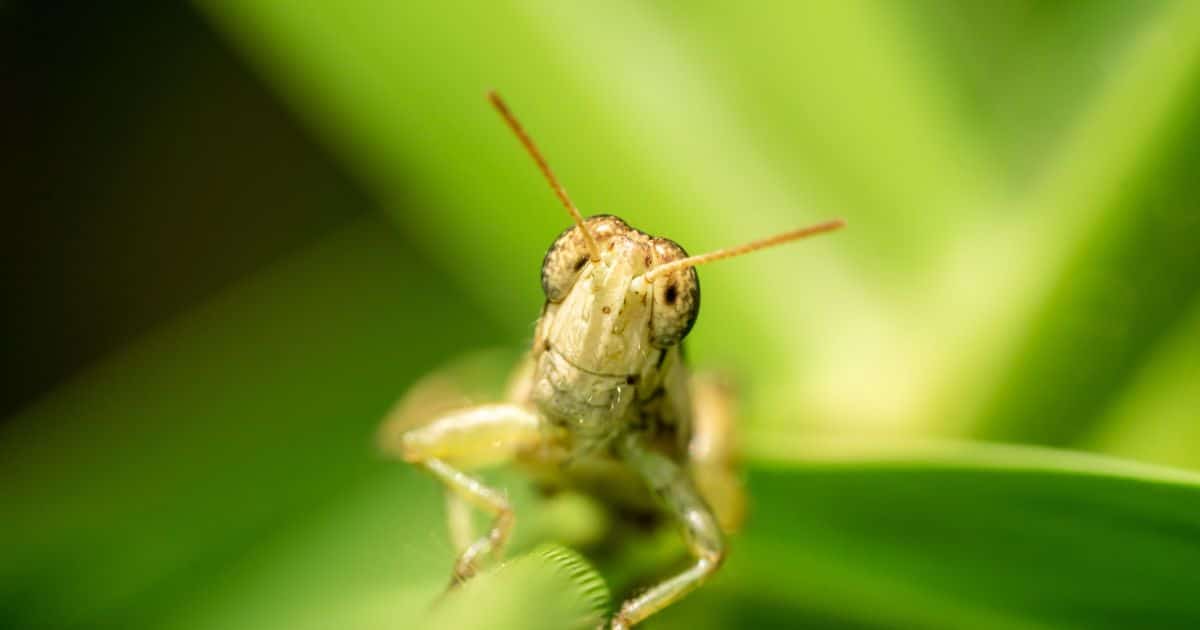 One type of farmed animal sits above all others just by sheer numbers farmed per year. No, it’s not cows, sheep, pigs or chickens. It’s not even fish. It’s insects.

Every year, over a trillion insects are farmed for human consumption: whether for food, clothing or traditional medicines. That’s more insects killed in a single year than all the humans who have ever lived: crickets, bees, cockroaches, ladybugs — the list goes on.

Yet insect farming is largely ignored by the general populace, especially in the West. The average consumer probably doesn’t think twice about the ethics, sustainability or processes underlying the insect farming industry. So what is really going on in this massive market?

What Is Insect Farming Called?

Industry members refer to insect farming as “micro stock” or “minilivestock,” but in most circumstances it is simply known as “insect farming.”

But beyond these overarching terms, insect farming constitutes a collection of farming practices, each of which bears a distinct name and methodology.

What Are Insects Farmed For?

What Insects Are Commonly Farmed?

By far the most well-known type of insect farming is honey cultivation. Honeybee farming, also called beekeeping or apiculture, has been around for 10,000 years. Most consumers are familiar with honey, which is generated when bees regurgitate nectar, but beekeepers also rent their bees to farmers for pollination. This migratory beekeeping can have harmful effects, as it spreads diseases among bee populations, particularly other bee species.

In popular media, beekeeping is often regarded as an act of conservation or “saving the bees.” Unfortunately, most beekeeping practices tend to benefit only the beekeeper, not the environment or the bees themselves.

If you’ve ever had strawberry yogurt, you may have ingested a cochineal beetle, also called a cochineal. These beetles are harvested, baked and then crushed to create an artificial red dye called carmine. This dye is used in a variety of foods, usually notable for a bright red or pink color, like candies, syrups, jams and even processed meats.

Carmine is more than just food, though. It’s been used in textiles, lip glosses, pills and in paint to restore historical paintings. It has become less common over the years, with big brands like Starbucks slowly phasing out the use of carmine in their signature drinks.

In some farms, billions of cockroaches are reared on food scraps, then eventually boiled alive, dehydrated and ground into a meal for human consumption.

Cockroach farming is a huge industry in China and Africa. In China, cockroaches are consumed as food and also used in Chinese traditional medicine to cure ailments such as ulcers and open wounds. In Africa, the industry is nascent but growing, with some touting it as a way to feed growing populations more efficiently.

If you’ve ever worn a silk scarf, you’ve benefited from something called sericulture, or silkworm farming.

The silkworm caterpillar, nested in a mulberry tree, will create a cocoon of a long, continuous fiber as part of its life cycle. Farmers will then kill the insect with hot air or boiling water, remove the body, and unwind the filament. The filament, when processed and treated, becomes silk thread.

Silk has been produced for 5,000 years and is popular around the world. China and India produce over 98 percent of the world’s silk, which is often considered a luxury good.

Mealworms (and their close cousins buffalo worms and waxworms) are used for, well, meals. In Southeast Asia, these worms are fried and baked and served as a popular street food, and they were approved for human consumption in the EU in 2020.

But these worms are not always for humans; many pet foods contain mealworms, as does some farmed animal feed. They are also used to break down food waste.

Interestingly, mealworms are not really an animal species unto themselves, they are the larval form of a type of beetle (sometimes called the yellow mealworm beetle). Similarly, waxworms are larvae of wax moths and buffalo worms are the larvae of the darkling beetle.

Lac insects are a family of multiple species native to Asia that produce a substance known as lac. A horde of these insects are exposed to a tree, like a hibiscus or kusum tree. The insects then colonize the branches of the tree, secreting the lac resin in massive quantities. The farmers may or may not purposefully kill the insects, or let them escape or die in the elements, before scraping the sticky substance off the trees.

This lac is used for a variety of purposes: leather dyes, wood polish, sealing wax and violin varnish. Some East Asian countries use it for traditional medicine. It is primarily produced in India, although it is often sold to Western countries and appears in goods around the world.

Crickets are usually harvested for food. Many startups, like Chirps and Chapaul, are touting crickets as a cheap and abundant protein source. Crickets are ground into a meal and processed into food for humans, including chips, crackers and cereal bars.

In Western culture, these brands have yet to find mainstream appeal. In other parts of the world, crickets have long been consumed as part of traditional cuisines, as in Southeast Asia.

How Are Insects Farmed?

Insects are harvested in two main ways: from the wild, or from farms. Collecting insects in the wild is obviously a more traditional way of eating them, but it has many challenges, including varying weather patterns, difficulties with scaling and susceptibility to timing errors.

Nowadays, most commercial insect farms prioritize domestication of species like bees, cockroaches, silkworms and cochineals. In an indoor farming environment, the harvesting process can be automated for efficiency.

After harvesting, the insects are quickly cleaned in water to remove dirt and other impurities.

Some insects have enzymes in their bodies that may spoil the food or harm humans, so farmers must inactivate them before moving to the next step. This usually involves blanching the dead insects in boiling water, although sometimes the insects are boiled alive. For other insects, a heat treatment or sun-drying may also serve as a form of inactivation.

After inactivation, the insects are heated to remove any microorganisms that may still be present inside the bodies. This can be done with either boiling water or a conventional oven.

After the heat treatment, insects are dried in an oven or microwave, in open air under the sun, or in a freezer. The drying process increases the shelf life of the insects.

After being dried, the insect bodies are processed depending on the manufacturing facility: for example, ground into a meal, turned into a breakfast bar or fried whole. They’re then ready for the market.

While insect farming is preferable to other forms of farming in terms of its environmental impact, critics argue it fails to live up to the claims of industry practitioners.

Is It Ethical To Farm Insects for Food?

While insects may seem small, and therefore unimportant to humans, insects are capable of feeling pain, according to a growing body of evidence. When insects are farmed by humans, they are usually killed in ways that would seem horrific to a human: boiled alive, ground up alive, blasted with steam, overexposed to heat or fried in oil. If insects feel pain — and evidence suggests they do — then insect farming undoubtedly creates needless suffering.

Evidence is also emerging that shows insects engage in activities that might surprise many people. For example, bees are known to play and dance with their friends and invertebrates can likely feel emotions like stress. Researchers are becoming confident that insects are more than the mindless automatons that humans have tended to believe they are.

Are There Benefits of Farming Insects Over Traditional Livestock?

Yes, there are many environmental benefits to insect farming. Insect farming emits far less methane and carbon than traditional livestock farming, especially when compared to cattle farming. Some insects like soldier flies can also eat food waste or other materials that are easier to find than feed for cows or pigs (exceptions include silkworms or lac insects, which require certain trees to grow), and some forms of insect food appear to have a higher shelf-life than traditional meat.

Another potential benefit for some forms of insect farming is how it can reduce food waste. Insects like cockroaches can live on rotten food unfit for human consumption. By linking food disposal systems and insect farming, food waste could be reduced. However, insect producers have yet to put this type of feed system into practice at scale.

One potential problem is overharvesting, where . Insect populations are declining worldwide. Since the 1970s, we have seen a decline in ground insects — in at least one location record suggest by a nearly unbelievable 98 percent — due to a variety of factors, including pesticides, habitat loss and climate change. Overharvesting of some insects could add to population decline and cause ecological damage by disrupting food chains.

Is Insect Farming the Future?

Insect farming is often discussed as a solution to issues of climate change, overpopulation and food scarcity, usually as an alternative to the unsustainable industries of beef and pork. But that doesn’t mean this is the direction we need to head in.

Every advantage that insect farming holds over traditional animal farming, plant-based farming also holds over insect farming to a greater degree. For example, while it’s true that insect farming can theoretically reduce food waste by using rotten food, plant-based farming would reduce overall food waste even further. Some researchers estimate that a plant-based food system would grow enough food for an additional 350 million people. This is because insects require energy from plants to grow whereas plants can skip this step in the food cycle, causing less energy and food to be wasted.

Consumers and investors are always looking for trends in the food industry, be it cricket bars or feeding seaweed to cows. But if we are truly looking to solve pressing problems like climate change and food insecurity, a plant-based agricultural system would do far more good than any animal agriculture solution.

Despite its flaws, insect farming is an attempt to address a very real challenge — how to feed the world’s growing population without depleting resources and contributing to global warming. Yet research suggests transitioning to plant-rich diets would be more effective at addressing this challenge, and without killing sentient creatures or harming beneficial insect populations.

You can volunteer or donate to insect restoration projects like Buglife that protect wild species of insects worldwide. You can also support grassroots initiatives to protect insects on endangered species lists. You can even plant local wildflowers in your area to help insect populations flourish — but make sure to check the plants are not invasive.

If you are interested in eating more sustainably, opt for a plant-rich diet, which is beneficial for both reduced land use and greenhouse gas emissions. More resources are available on our Take Action page.