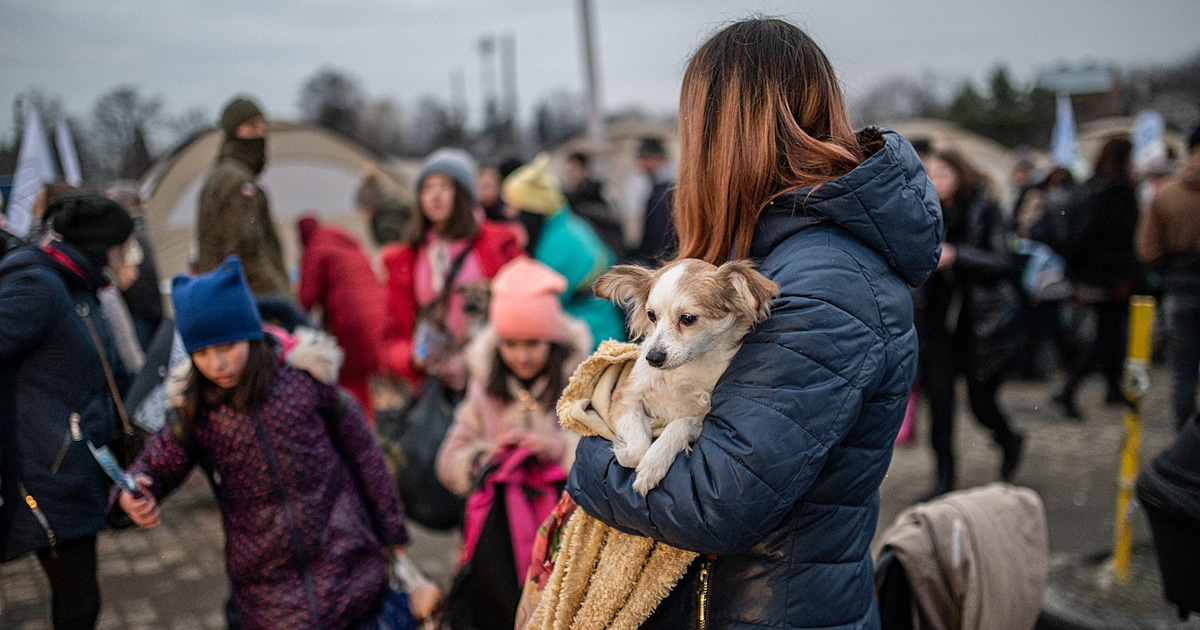 Millions of lives have been impacted by Russia’s invasion of Ukraine, now in its second month. According to the United Nations, 1,179 civilians had been killed as of March 29. Animals, too, face the devastating impacts of the violence.

Almost every day, advocates share more inspiring stories of how the people of Ukraine are risking everything to protect their animals. Some Ukrainians stay to keep shelters open, while others help to relocate animals out of harm’s way. Now, aid organizations are lending their support to launch international animal rescue efforts.

The UK charity Viva! and its Polish sister organization report that they are saving hundreds of animals in Ukraine through efforts including fundraising, rehoming of pets, food distribution, and more. The groups have raised over $39,000 to support these efforts, and report having delivered nearly 50 tons of food for animals.

Viva’s sanctuary in the Polish village of Korabiwice, not far from Warsaw, has taken in 100 cats and dogs evacuated from Ukrainian shelters due to the danger of starvation or bombing, as well as some human refugees, according to Viva! founder Juliet Gellatley. “The scale of the problem for both people and their animals is vast,” she says.

“Being a big sanctuary with space, we have been able to divide up pens to accommodate the 100 newcomers. Our volunteers and resident vet, along with a refugee vet from Ukraine, have been able to settle, reassure and treat the often traumatized new arrivals,” says Viva! Poland manager Cezary Wyzinsky. “It is a desperate situation, with two million refugees and their companion animals now in Poland, and the flow continues.”

The shelter, already housing 450 animals prior to the crisis, is now at the brink of capacity. Viva! has since launched a rehoming campaign, asking people in the UK to adopt some of the existing dogs “whose characters we know and who don’t require quarantine,” says Gellatley. “They have responded magnificently, creating more space for us to receive new refugee dogs.”

In need of shelter

On the Ukraine-Poland border, a structure has been built to accommodate the influx of animals in need of shelter. “Some of them are street dogs, they have never been in human hands,” volunteer Sonja Mortensen-Dissing told the Associated Press, while others have been left behind by those fleeing, “sometimes with a letter where they write, ‘We hope we can find our dogs and cats again.’”

For animals in Ukrainian zoos, the future remains uncertain. While some have been evacuated to Poland and Romania, other captive animals are still in harm’s way and some staff members have stayed behind with them.

One inspiring rescue can be found in the story of Masha, a bear who had spent more than 20 years in a circus before her rescue in 2018 and who now has been transported from western Ukraine to a bear sanctuary in Romania. Arriving at the sanctuary seemingly shaken, Masha soon began to explore her new surroundings, moving her rescuers to tears.

“Imagine 22 years never seeing another bear,” Cristina Lapis, Libearty Bear Sanctuary’s founder and director, tells National Geographic. “When she saw the other bears and began to smell them, we were all crying.”

Volunteers to the rescue

Volunteers have also joined in the efforts to save Ukraine’s animals. Moved by news of the death of Anastasiia Yalanskaya, a 26-year-old who was reportedly one of at least three people to have been killed while delivering food to shelter animals, UK volunteer Lisa Buck felt she must take action.

“I simply said to my husband: ‘I have to do something!’ I have three dogs of my own and the thought of animals being hungry and homeless wrenched at my heart,” says Buck, who has coordinated with Viva! in her efforts to bring pet food and other supplies to Poland. After hearing her story, others came to her aid.

“I’ve been flooded with so many kind donations that I have to keep repacking the van! Every time the doorbell goes with more packages I feel a lump in my throat from the generosity.  Having reached capacity, I’m planning a return trip in April,” says Buck.

If you are looking for ways to help animals in Ukraine, please see our list of resources and groups to support, and click here for more on how to aid Viva!’s rescue efforts.