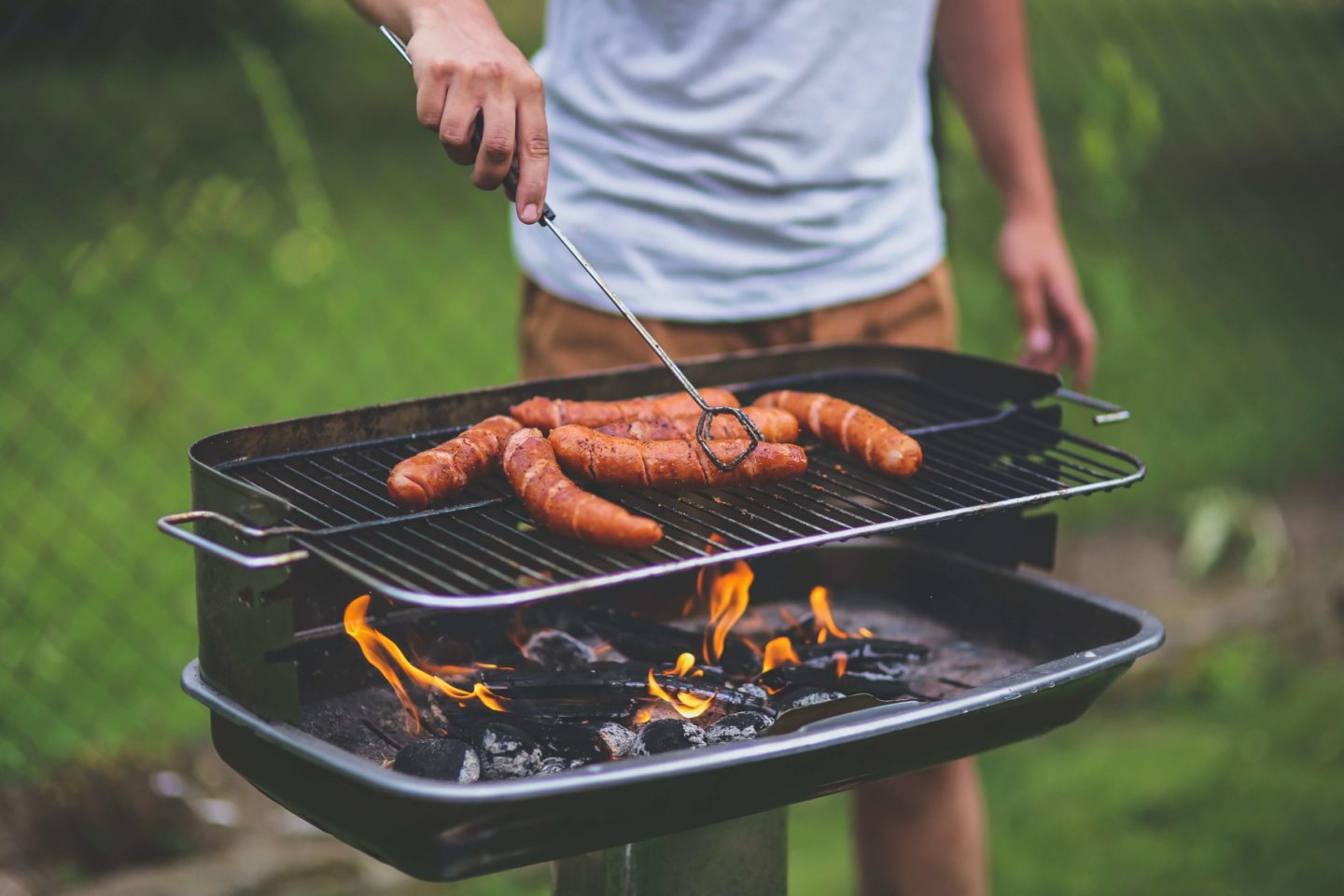 Pandemics, Liberation, and Animal Ag: An Interview With Peter Singer

It’s another sunny weekend under the bright blue sky of an American suburb. An oozing red steak is sizzling on a gleaming grill in a well-manicured backyard. In your imagination, who’s holding the barbeque tongs?

Chances are the hypothetical griller in your mind is a cisgender, heterosexual man. You’re not necessarily sexist for imagining the scene this way; you’re responding to centuries of ingrained gender stereotypes that associate men and masculinity with meat-eating. Men, as enthusiastic carnists, are not inherently evil; they too are responding to a culture that pressures and manipulates men to assert their masculinity through the consumption of animals.

The connection between meat consumption and masculinity is not new. What is new is the increasing influence of prominent vegan men who speak up about the benefits of their diets. At the start of 2020, Men’s Health UK published a complete guide to eating a plant-based diet. The Game Changers, a documentary comparing the health and fitness effects of eating meat versus only plants, was released late last year. The film, in making the case for a plant-based diet, features scientists explaining how meat consumption negatively affects the body and conveys stories by famous vegan or near-vegan athletes, such as Arnold Schwarzenegger. “Steak is for men!” Schwarzenegger declares sarcastically while a series of meat advertisements play in a montage. His underlying message for men is that meat is not actually healthy or beneficial to them, despite how strongly this myth persists.

Meat is aggressively marketed to heterosexual men, through both subtle and not-so-subtle references to masculinity or sex. Carl’s Jr., prior to shifting its marketing tactics in 2017, notoriously sponsored blatantly sexist commercials. The fast food chain’s ads unapologetically targeted “young hungry guys,” showing enormous burgers being devoured by scantily-clad starlets. Other advertisers have been more subtle with their manipulation, but often include only men in their marketing campaigns, like in this cheery 2010 KFC commercial for a cheese, bacon, and chicken “bunless sandwich” (in which two slabs of fried chicken replace the bread). When women are featured in advertisements for meat, they are more likely to be portrayed as symbols for meat or in subservient roles, purchasing or cooking meat for male consumption. Images speak volumes; with these ads, food companies reinforce the idea that meat-eating is essential to masculinity.

Partly as a result of these targeted marketing efforts, men consume protein, and meat in particular, at alarming rates—far more than women. According to a 2015 U.S. National Health and Nutrition Examination Survey, young boys and adult men consume an astounding 57 percent more meat than women. The U.S. Food and Drug Administration recommends that individuals consume about 50 grams of protein daily (56 grams for men, 46 grams for women), an amount easily achieved through a healthy plant-based diet. Those who choose to eat meat can ingest 21 grams of protein in a single three-ounce serving of red meat, but many people—men in particular—are consuming far more than is recommended. United States Department of Agriculture (USDA) data shows that from 2011 to 2012, middle-aged American men daily consumed about 110 grams of protein, nearly twice the recommended amount of 56 grams. In 2016, for the first time, the USDA warned against excessive meat consumption, recommending that “some individuals, especially teen boys and adult men…reduce overall intake of protein foods by decreasing intakes of meats, poultry, and eggs and increasing amounts of vegetables or other under-consumed food groups.” Despite mounting evidence of the dangers of excessive meat-eating, many men still stubbornly defend meat as a source of both protein and masculine validation.

“This is great, great marketing for the meat industry, selling the idea that real men eat meat,” Schwarzenegger says in The Game Changers. “But you’ve got to understand, it’s marketing. It’s not based on reality.”

I actually disagree with the Terminator on this point. While marketers blatantly leverage tired stereotypes to influence men to eat meat, humans of all genders and backgrounds continue to collectively reinforce those stereotypes. Multiple studies show that both men and women associate red meat consumption with strength and masculinity. A 2011 study entitled “Meat, Morals, and Masculinity” revealed that vegetarian men are considered to be 35 percent less masculine than their meat-eating brethren. It could easily be inferred that vegan men are viewed as even less manly.

Stereotypes linking meat with masculinity are affirmed throughout history; in the Bible’s Book of Leviticus, only priests and sons of Aaron receive sacrificial meat. During World War II, Americans at home rationed meat so that men in the military could continue to consume it. We as a society, past and present, have decided that meat is for men, and that the most masculine of men—the holiest, wealthiest, and most violent—deserve meat the most. Even if it kills them.

Meat may be the staple of the “macho” man’s diet, but it’s potentially fatal. Diets high in meat consumption, according to a 2019 British Medical Journal study, have been consistently linked to serious conditions such as cardiovascular disease, Type 2 diabetes, and some cancers. Heavy meat consumption even poses an increased risk of death.

A 2014 World Health Organization report shows that men die earlier than women. Men tend to work more dangerous jobs and visit the doctor less frequently, which somewhat explains this gendered disparity in lifespans. Researchers at Harvard Medical School note that a contributing factor to men’s reduced lifespans is that men are 50 percent more likely than women to die of heart disease, a condition associated with high consumption of red meat. Some factors—including naturally larger physical size, a higher likelihood of committing suicide, and a higher likelihood to engage in risk-taking behaviors — already predispose men to a shorter lifespan; piling on the beef is not helping.

In The Game Changers, Patrik Baboumian, a world-record-holding strongman who proudly flaunts his “Vegan Badass” t-shirt, reflects on the common presumptions about his meat-free diet. “Someone asked me, ‘How could you get as strong as an ox without eating any meat?’” he says. “And my answer was, ‘Have you ever seen an ox eating meat?’” Dr. James Looms, a former football team physician also featured in the documentary, explains simply: “All that protein that you get when you eat a steak or a hamburger…it came from the plants that the cow ate.”

Yet the correlation between meat consumption and masculinity persists. Only 21 percent of U.S. vegans are men. Myths related to soy consumption—false claims that soy increases risks of cancer, harms thyroid function, and feminizes men—may be contributing to men’s reticence to adopt plant-based diets. Falsehoods about soy are often spread by organizations with vested interests in the meat industry, in efforts to curb rising rates of veganism. A major purveyor of these false claims is the Weston A. Price Foundation (WAPF), which touts itself as a nonprofit organization dedicated to nutritional education. WAPF advocates for the hearty consumption of animal products; not coincidentally, many of its members belong to the animal agriculture industry. Tri-State Livestock News is the publication behind a misleading report stating that the Impossible Whopper potentially causes men to grow breasts. Many lesser-known studies conclusively prove that soy products do not alter testosterone or estrogen levels; consuming soy may even lower the risks of both breast and prostate cancers. Having to contend with so much manipulative marketing and misleading information, it’s no wonder that men are uneasy about adopting plant-based diets.

Dismantling the connection between meat and masculinity is a complicated task, one that is rooted in education. An intersectional perspective, such as that of ecofeminist Carol J. Adams, is necessary to disrupt deeply-rooted gender stereotypes. Ecofeminists observe that gender deeply influences the ways that humans interact with the natural world. Feminists and LGBTQ+ activists are encouraging masculine-identifying individuals to express themselves in emotionally and physically healthy ways, and to actively challenge traditional stereotypes about masculinity. The ubiquity of plant-based foods in developed countries is sparking discussions among humans of all genders about healthier ways to consume protein. Plant-based athletes such as Schwarzenegger and Baboumian are demolishing worn stereotypes by showing that humans can be exceedingly strong and healthy without animal protein.

The same study that found that vegetarian men are perceived as less masculine also revealed that these same men are considered to be more “virtuous” than meat-eaters. Meat consumption may be synonymous with strength and power, but it also correlates to aggression and violence—two things with which no one should want to be associated, regardless of gender.