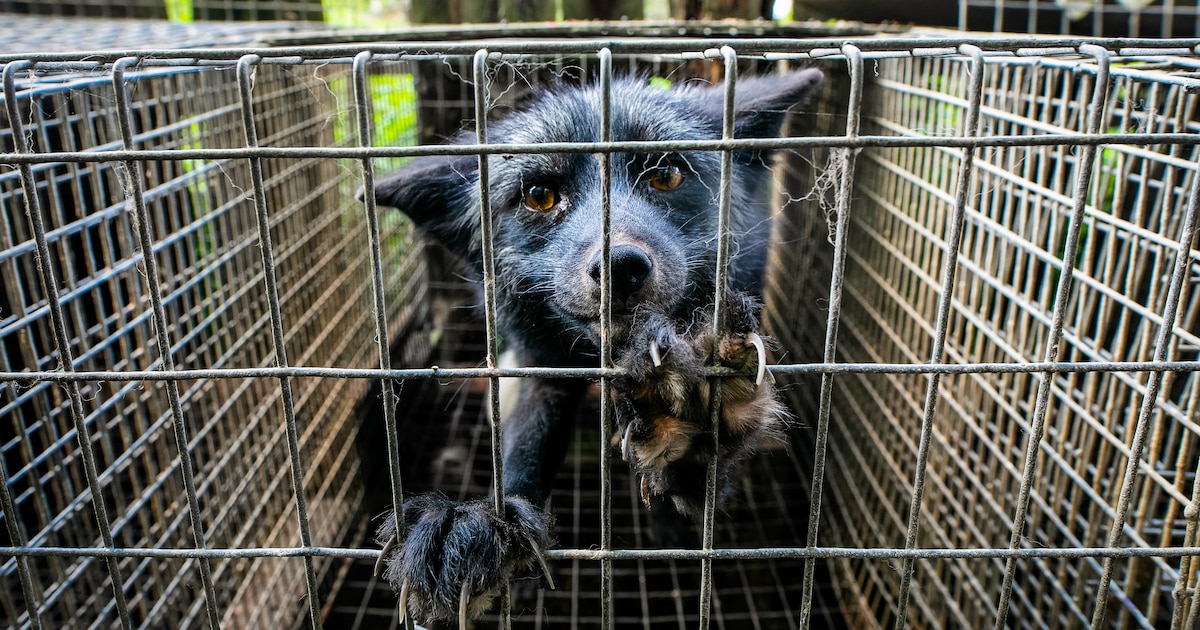 A fox looking out through the metal bars of a small cage on a fur farm. A cow looking directly at the photographer, as a knife is held in the air above the animal’s head. Dead frogs turned into bags, with zippers and strings sewn to their bodies. These images are uncomfortable for all of us, but a new collective of photojournalists believe in their power to incite change.

HIDDEN: Animals in the Anthropocene features the work of 40 photojournalists from around the world—including Andrew Skowron, Selene Magnolia, and Aitor Garmendia, among many others—offering an “unflinching” look at “our conflict with non-human animals around the globe.”

The 320-page book published by We Animals Media and edited by Jo-Anne McArthur (We Animals, Captive) and Keith Wilson (Photographers Against Wildlife Crime, Remembering Elephants) is heavy both in its physical weight and its emotional subject matter. McArthur describes it as “a historical document, a memorial, and an indictment of what is and what should never again be.”

McArthur and Wilson ask us to look more closely at things that permeate our daily lives: the use of animals in our food, clothing, entertainment, and research. As we face a public health crisis around the world, and experts warning of more pandemics to come, it is a timely look at our relationship with animals and with nature.

The people behind the crowdfunded HIDDEN aim to further animal photojournalism, described by McArthur as “an emerging genre of photography that captures, memorializes, and exposes the experiences of animals who live amongst us, but who we fail to see.”

Both McArthur and Wilson liken this work to that of war photographers. It may be a shocking comparison to some, given the loss and lasting trauma of human wars, but they offer the images within HIDDEN as “proof of the emergency confronting animals globally.”

Wilson says, “It is very comparable in terms of the subject matter, there being victims and oppressors, atrocities and bloodshed…Yet society remains impervious to the systematic killing of billions of animals every year because people are more desensitized to the suffering of animals than the suffering of people.”

Animal suffering is happening on a massive scale—with around “80 billion animals used and consumed by humans” every year. Then, there is an estimated one trillion fish caught from the ocean and killed each year, along with mostly uncounted marine life killed by the fishing industry, called bycatch, and billions more fish raised and killed on factory farms.

These numbers can look overwhelming. The sheer scale of animal suffering helps to keep them hidden not just behind the walls of factory farms or inside the cages of laboratories, but in our own minds—as statistics or faceless groups of animals instead of individuals. HIDDEN takes a closer look.

In the book’s foreword, Oscar-winning actor and activist Joaquin Phoenix praises the featured photographers. “Their work has made it impossible for exploitative industries to plausibly deny the agony and suffering taking place behind closed doors, deliberately kept out of the public consciousness.”

While it may feel tempting to close the book and shield our eyes, McArthur urges us not to look away. She feels that this emotional response can spur action, as it does in her when she is forced to leave the animals she photographs behind.

“I can’t help the millions of animals I’ve met. I’m trying to change the future for animals. So, the leaving comes with a feeling of guilt. I channel negative and unproductive feelings into action, though, otherwise, I would not be able to do this work,” McArthur says. “It’s very clear to me that we can only change suffering if it’s out in the open and if we don’t turn away from it.”