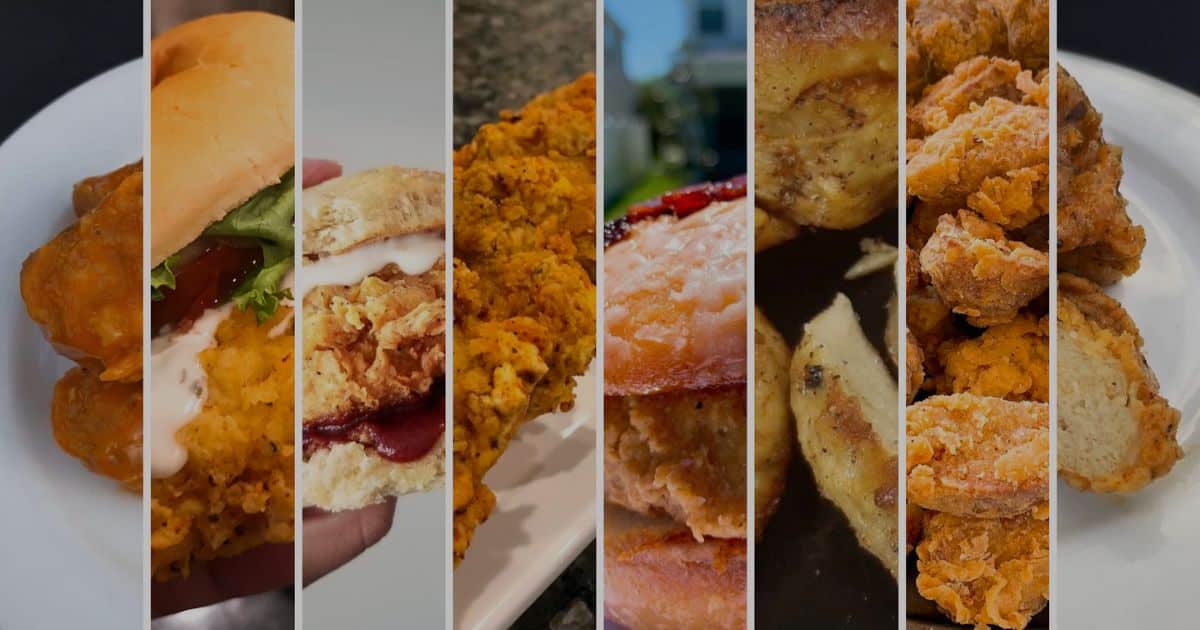 Within his community, Chris Burnam is known as a skilled cook and grill master. When he transitioned to a vegan diet, he wanted to make sure that didn’t change, so he created his own product that he could use to continue making the recipes that his friends and family have grown to love. Over these recipes and meals, he is able to start conversations about veganism and the benefits people can have if they adopt the diet for themselves.

Grace Hussain: What’s the story behind House of Chick’n?

Chris Burnam: We used to be in church a lot, and we used to do Daniel fasts which is where you don’t eat any meat for 30 days. After every fast, I’d go straight to Publix. I’d get some chicken, Hawaiian rolls and hot sauce and just go to town. One year after the fast, I bit into the chicken and it was totally raw. It was fried on the outside but raw on the inside. I’m super visual, so I was looking at it, my mind going crazy. I decided to start doing research about meat. I learned about all the pain and suffering that happens to the animals and thought it was nasty.

So I stopped eating meat.

As far as making my own product, I was always that guy that when people came to my house for barbecues and get togethers, they wouldn’t bring dishes but instead ingredients. Then they’d ask me to make the actual food. When I went vegan, I wanted to start creating some dishes to become a vegan chef, but I wanted to scale the business, and I can’t scale myself. One thing I noticed was missing was a really dope vegan chicken, so I decided to create my own. I started doing my own research and created bad chick’n product after bad chick’n product until one day we got the perfect product, and I started selling it and here we are.

I knew that a big thing to shift my community’s — the Black community’s — views about veganism is going to be the ability to make traditional dishes. Chicken plays a big part in our culture and the traditions of our culture, so I knew it would be a good fit.

Grace: What challenges did you overcome in creating House of Chick’n?

Chris: One of the biggest challenges that happens with all minority owned businesses, especially small businesses, is funding. That’s a challenge that I had and continue to have. I’ve been fortunate that the business continues to grow and sell so that helps itself out. Also, business knowledge is something that you have to get into and learn step-by-step, especially if you don’t come from a family of business owners. That’s a challenge that I had. Finally, I think that getting people to understand that veganism is not a monolithic thing. It’s for your health, the animals, the environment; there are so many different facets to veganism, so getting people into that mindset to understand veganism is another big challenge.

Grace: What tactics have you employed to help you overcome the perception of veganism as monolithic?

Chris: A big part of it is making traditional dishes with vegan products. A lot of times people eat with their eyes, so if I can make dishes that they’re familiar with like garlic parmesan wings or barbecue chicken that look like the dishes they’re used to, that makes the transition better. I always say that I want to be the conduit between people eating all meat and raw vegan. There has to be that in-between of people going back and forth, because people do go back and forth. I want House of Chick’n to always be that conduit, that in between.

Grace: You also started the #Blegan. What was your inspiration for that?

Chris: It’s really stupid the way it got started. My friends and I would always joke about how lazy we are and wanting to combine words, so if it was mad hot outside, we’d say it was mot. I used to call myself a blerd because I’m a big time nerd. I love everything nerdy like comics. Then I decided that I’m a vegan, so let’s rock being Blegan, Black and vegan.

Grace: Why is it important to discuss Black veganism specifically?

Chris: One of the biggest issues that we have is with our health, and most of our health issues are food related. I try to get people to start thinking about Meatless Monday, once a month or once a week, and replace chicken with House of Chick’n or another brand, something without the horrible impacts on our bodies and the environment. Eating is always connected to tradition and memories. If I can get Black folk to think about veganism in a different way then it can lead to a bigger picture. Black and brown people dictate culture; the way we eat, what we wear, the music we listen to, so if I can bring veganism to a bigger picture in Black culture, then we can extend it to the culture in general. This is all of our environment, all of our earth, so we need to help each other do the right thing and eat the right way and take care of it the right way.

Grace: Veganism is often treated as a white movement, how do you address that with your work?

Chris: That is so true. I always go back to Africa and the Caribbean, whether Spanish Caribbean or Black Caribbean, there’s a lot of vegan food in those spaces. Whether it’s roots, fruits or vegetables there are a lot of vegan dishes that are not well known. I want people to understand that veganism isn’t specific to whiteness.

Another thing is that one of my cookbooks is vegan meals under $20. People think whiteness and veganism; they think they can’t afford to go vegan. I tell them that if they get some dry beans and some rice or quinoa and some fruits and veggies there’s a lot of things you can do.

Grace: When you are talking to someone considering transitioning to vegan, what do you say?

Chris: I start by asking them questions. I want to know where they are with their life, because I know that veganism can help them in some way whether by spirituality, health, financially or connecting with their kids. I’m 48 years old and feeling better than I ever have before. The more we harm animals, the more we harm the environment. Unless you plan on just dying and not giving a damn about anyone else, veganism is probably going to be better for you in some form or fashion.

Chris: One great thing about it is that it is soy free. Going back to creating memories, we give chick’n in its “raw” form. A lot of products are marinated or battered and fried or grilled for you, we give it to you in a way that’s as close to chicken as possible, so you can make it any dish you want. Whatever recipes you’d make with chicken you can use our product instead. That’s what really sets it apart from 99.9% of other products out there. Another thing is that we’re Black-owned. There’s not a lot of Black-owned vegan substitutes out there.

Grace: Where can people get House of Chick’n? And how can people best support you and your business?

Chris: We just rolled out our new website, houseofchickn.com, that makes it very easy for people to order. If we have chicken available on our website, give it a try. Otherwise, if you see one of our posts on social media, follow us. Subscribe to me on Youtube where I have a lot of recipes.

How to Become Vegan: A Simple Guide