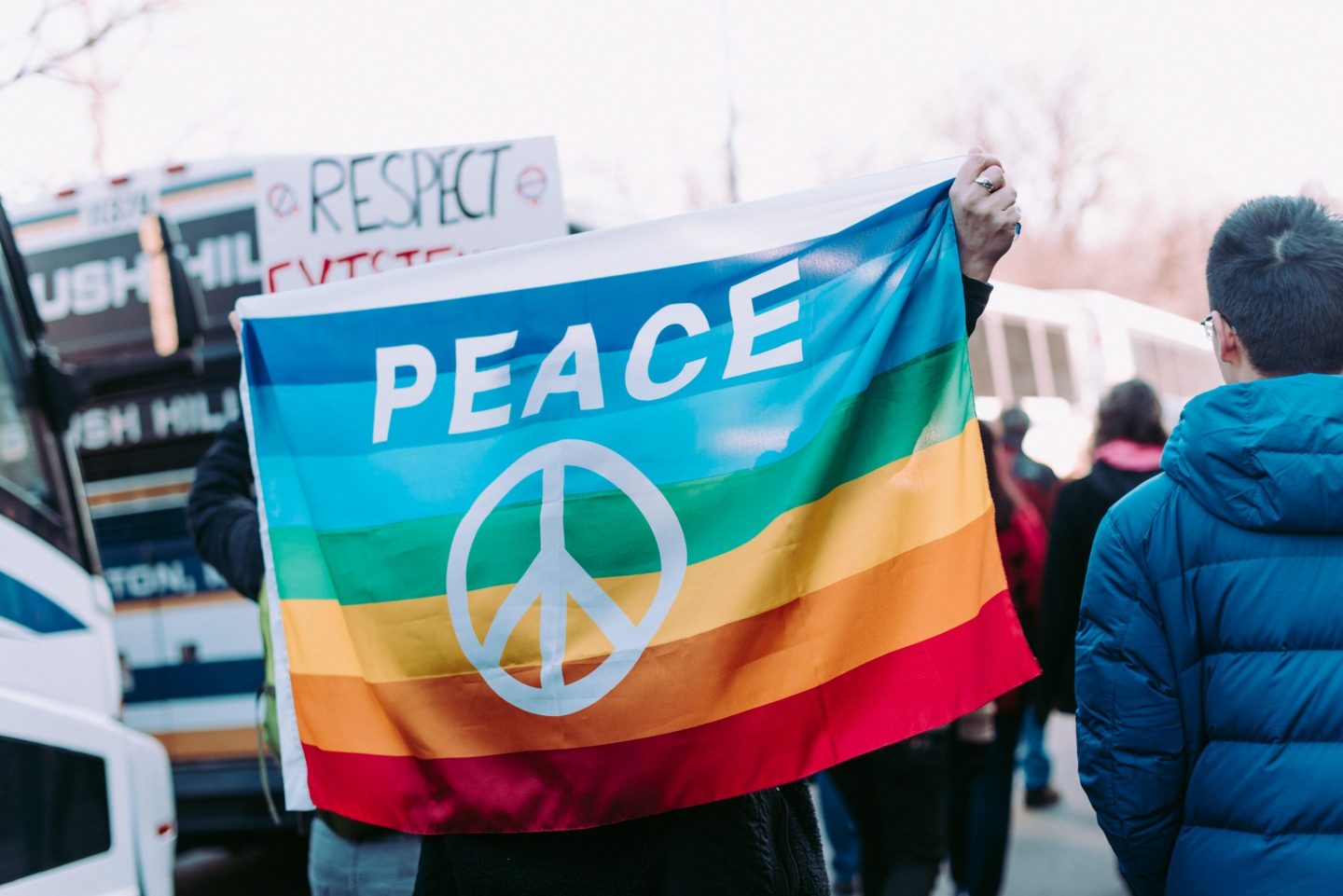 In April, a month into the COVID-19 epidemic, I was back in my hometown in Morgantown, WV. Baltimore, the city where I was living before the pandemic hit, had completely shut down.  I had been onboarded remotely for my new job in animal law, and my partner and I had just split up, so I came back home to the mountains. My co-edited collection, Queer and Trans Voices: Achieving Liberation Through Consistent Anti-Oppression, was published during this precarious time, despite the uncertainty we were and still are facing. In this collection, queer vegans were asked to explore the interconnections between their identities—being LGBTQIA+ and vegan—and how they impacted the way they walked through the world. Being in my childhood home when this anthology was released pushed me to interrogate my own identities and how being vegan had impacted my gender, sexuality, and politics—and vice versa. I found that when I stand up for queer liberation, I am also standing up for animal rights. When I am fighting against speciesism, I am working towards LGBTQIA+ rights. If we do not fight for animal rights, we, LGBTQIA+ people, are supporting a system that maintains our own oppression.

As a nonbinary life-long activist, veganism is not only connected to the way I perceive and understand myself in connection to the world. It is also a political tool that directly confronts a system that marginalizes Black Brown Indigenous People of Color (BBIPOC), queer and trans people, women, disabled people, immigrant workers, and low-income individuals. My answer to this problem begins with the recognition of how cisheteropatriarchal speciesism, a system that normalizes violence towards those viewed as the “Other,” works to uphold structures that oppress all of us who are marginalized. Queer vegans and contributors to the collection, Queer and Trans Voices, such as Julia Feliz, LoriKim Alexander, Moe Constantine, Shiri Eisner, Leah Kirts, and Patti Nyman illustrate the potential of political veganism to create a more sustainable and equitable future.

In Leah Kirts’ chapter, “Toward an Anti-Carceral Queer Veganism” in the collection Queer and Trans Voices, she describes growing up helping on her uncle’s dairy farm. She now recognizes that her uncle’s cruelty towards the cows “mirrored his abuse and exploitation of the undocumented Mexican immigrants he employed for years in what can only be described as a form of indentured servitude.” The contemporary neoliberal-capitalist food system endangers all of us—the human and the nonhuman. She contends that a “queer vegan anti-capitalist and anti-carceral political framework” is necessary to recognize how systems that perpetuate violence towards slaughterhouse workers and nonhuman animals in factory farms are interlinked.

Kirts’ comment illustrated that veganism is more than a diet—it is a political framework that informs activist praxis and challenges hegemonic power structures. She contends that:

It’s crucial to think of veganism not as an end unto itself but as inseparable from other political movements striving for the total liberation of all marginalized bodies such as prison abolition, Black Power, queer and trans liberation, Indigenous land rights, the labor movement, and environmental justice.

This political framework, also called consistent anti-oppression, is most impactful when aligning itself with other social justice movements, such as queer liberation, workers’ rights, environmental justice, animal liberation, and disability justice. Scholar-activists like Anthony Nocella, Sunaura Taylor, Carol Adams, Josephine Donovan, and Pattrice Jones have explored the interconnections between veganism/vegan scholarship and movements such as “eco-ability,” “veg(etari)an ecofeminism,” and “queer veganism.” At the heart of each of their arguments is that vegan politics not only connects to other social justice movements but is itself integral to dismantling systems of oppression.

Sentient Media’s series, “Encompass Essays,” illustrates this sentiment. In the inaugural essay, writer Jasmin Singer contends that she comes to veganism with an “all-encompassing, overlapping approach.” Her vegan advocacy work inspired by her congruent interests in LGBTQIA+ activism and AIDS awareness. She contends that “in order to work towards the liberation of one group, we must actively stand against the violence of another.” In Queer and Trans Voices, Singer explores the parallels between animal rights (AR) and the LGBTQIA+ movement. She explains that the “overlapping issues” of structural violence affecting human and nonhuman animals, especially the connections between AR and queer liberation, “has become [her] life’s anchor, and [she hopes] her life’s work.”

Singer’s work illustrates why consistent anti-oppression work is so important. As Julia Feliz explains, “…to fight against speciesism…we must also fight against white supremacy, environmental climate change, capitalism, and so forth.” Our movement for animal rights and towards a more ethical food system must include coalition-building. A strong vegan movement is one that is anti-racist and fights against environmental racism; it is a movement that centers the voices of queer and trans-BBIPOC. To fight for animals, we need to fight against all forms of oppression and dismantle the structures, like white supremacy and cisheteropatriarchy, that are the root of this marginalization. This goes the other way as well, my LGBTQIA+ community needs to step up and realize that speciesism impacts us as well. To fight for queer liberation, we need to include animals in our activism.

Racism in Me, the Movement, and the Meat Industry